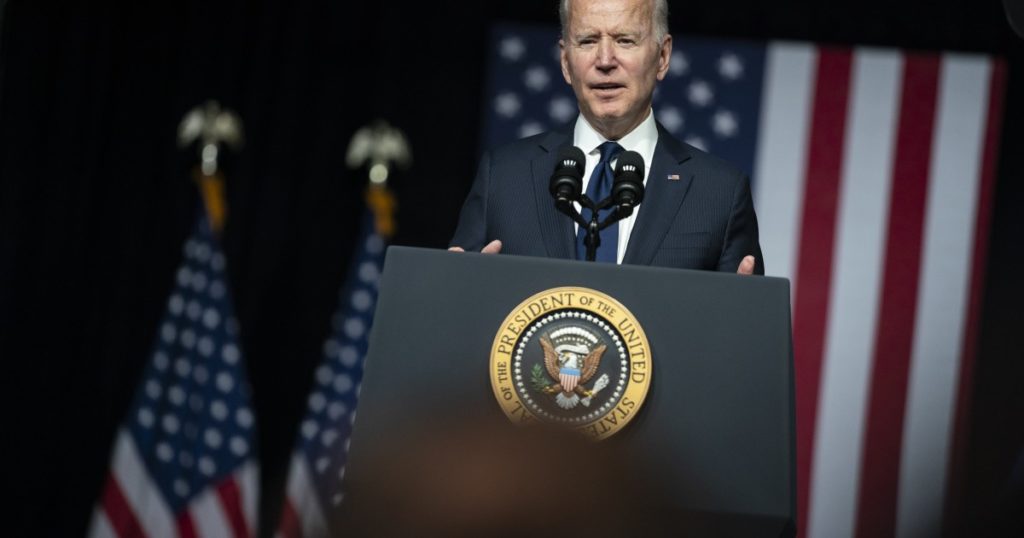 President Biden, under growing pressure from the left to fight harder to block new voting restrictions flowing from GOP state legislatures, will on Tuesday give his most high-profile speech yet on the issue, which is emerging as central to the midterm elections.

The speech, to be delivered in Philadelphia, is part of a broader administration effort to amplify its voice on voting rights, as avenues for countering GOP laws have narrowed to the vanishing point in a fast-paced string of setbacks in Congress and the courts.

Biden’s reliance on the bully pulpit, however, makes clear how few other moves he has at his disposal. Constrained by a deeply divided Congress and Democrats’ paper-thin legislative majorities, there is no clear path for Biden to ensure that legislation protecting voting rights ever makes it to his desk.

Unless the White House is able to convince a small number of moderate Democratic senators that the issue is cause to dismantle the filibuster rules requiring 60 votes to enact legislation, rhetoric may be its only response to a state-by-state Republican onslaught to make election laws more restrictive.

The charge continues this week in Texas, where the state legislature is meeting in special session to pass new voting restrictions. Republicans’ initial attempt was foiled in May when Texas Democrats walked out of their regular legislative session. They are deploying that tactic again this week and taking the more dramatic step of leaving the state and flying to Washington to rally support around their cause.

In his speech Tuesday, Biden will “lay out the moral case for why denying the right to vote is a form of repression,” said Press Secretary Jen Psaki, who called GOP laws “authoritarian” and framed the broader assault on voting rights as “the worst challenge to our democracy since the Civil War.”

Although she told reporters Biden would “use every tool at his disposal,” she declined to say if he would get behind House Democratic Whip James Clyburn’s compromise proposal to curb the use of the filibuster just on voting rights legislation. She warned that there were “a lot of issues out there where you could argue for an exemption” and noted that Democrats don’t currently have the Senate votes to make such a rule change.

In an interview, Clyburn (D-S.C.) said he remained “convinced [Biden]’s committed” to protecting voting rights, despite the president’s reluctance to publicly embrace any changes to the filibuster.

“Just because a president is not standing at the microphone making these arguments, it doesn’t mean he’s not using the telephone,” he said. “I just don’t think you negotiate these kind of issues from the microphone, you do it much better from the telephone.”

Biden’s speech will have a political subtext, pinning the blame on Republicans for the cascade of new laws curbing voter access. The task at hand, potentially: channeling voters’ frustrations into higher turnout that benefits Democrats next fall.

The political stakes are high for Democrats, who are at risk of losing their slim majorities in Congress, and some believe their cause is lost if GOP state laws are left in place.

“This is a crossroads,” said Ben Zion Ptashnik, president of the bipartisan National Election Defense Coalition, who has spent 25 years working on voting rights and election security. “At this point, we know that the Democrats may lose control of the House and Senate — or one or the other in 2022 — and this will be the last chance they have.”

Biden’s speech will follow one made by Vice President Kamala Harris last week, when she announced new spending by the Democratic National Committee to register and educate voters in the face of new voting restrictions — an investment that could help with the midterm goal of driving up turnout. Still, while that announcement was welcomed by progressives, it disappointed those who believe that anything short of changing federal law will be fruitless.

“Everything she committed to do is good and fine but wholly inadequate,” said Rahna Epting, executive director of the progressive group MoveOn. “We need the Biden administration to go big and use the full force of the federal government and the bully pulpit to make progress before it is too late.”

Biden tasked Harris with leading the administration’s efforts on voting rights during a June visit to Tulsa, Okla., where he was the first American president to thoroughly commemorate one of the worst — and historically overlooked — instances of racial violence in the country’s history, the 1921 uprising in which a white mob massacred hundreds of Black residents in Tulsa’s Greenwood neighborhood.

During impassioned remarks there to mark the centennial of the tragedy, Biden promised the forgotten events of 100 years ago “will be known in full view.”

But he seemed to acknowledge that bringing the painful past into a new light was somehow easier than securing voting rights in the present. He offered only tempered optimism about his ability to prevent a new wave of restrictive state laws aimed at making it harder for people of color to vote. Adopting the rallying cry of the 1960s civil rights movement, Biden was resolute: “We’re going to overcome again, I promise you, but it’s going to take a hell of a lot of work.”

If Democrats cannot enact voting rights legislation this year, they are likely to make it a focus in 2022 in the run-up to the November midterm elections in order to educate and galvanize voters of color to turn out. Psaki acknowledged as much at the podium Monday, stating that Biden “wants people across the country to not just look ahead to 2024 but to be prepared and eyes wide open about 2022.”

Republicans are already making it a campaign issue, saying the new election laws are needed in response to allegations that former President Trump has made of widespread voter fraud — allegations without factual basis.

GOP Gov. Brian Kemp of Georgia, in a reelection ad, lambasted Democrats for attacking the state’s voting rights restrictions. “Here’s my commitment,” he said. “Secure, accessible and fair elections will always remain the foundation of who we are as a state. And I’m not backing down from the fight.”

John Anzalone, a pollster for Biden, says Democrats have the better end of the argument about voting laws: “Americans are much more concerned about access to voting than voter fraud. Americans want to make it easy for people to vote. Period.”

Still, the Biden team is keenly aware of the frustration among activists that the White House has been unable to mount a legislative response to GOP efforts to restrict voting access. Biden, in his speech Tuesday and going forward, is expected to try to clarify for the public that Republicans, not Democrats, are to blame for the new wave of restrictive state laws.

That may not satisfy progressives who have criticized Biden for expending too little political capital on voting rights while focusing primarily on a bipartisan infrastructure compromise with Republicans or the COVID-19 relief bill he rammed through Congress. Although Biden addressed the issue in Tulsa, he has not summoned members of Congress to the White House, leaned on recalcitrant Democrats, or otherwise gotten involved in breaking the Senate deadlock.

Ezra Levin, co-founder of the progressive group Indivisible, said that Biden’s speech Tuesday will be nothing but a “dog and pony show” if it does not signal the beginning of a sleeves-rolled-up commitment to breaking the deadlock on federal legislation, known as the For the People Act.

“What we are looking for is an LBJ-style engagement,” said Levin, referring to President Johnson. “We hope this isn’t just a few words spoken in Philadelphia but the beginning of a full-fledged campaign to pass the For the People Act before the August recess.”

Senate Democratic Leader Charles E. Schumer (D-N.Y.) has said that the June filibuster of the For the People Act was the starting gun but not the end of the fight over voting rights. Yet it remains unclear when and how the legislative gridlock could be broken.

Even some progressive activists are doubtful that this Senate will change the rules, and are already looking to future elections to bring in a new generation of reformers.

“It is now very much in the hands of people to accept that Congress has failed us,” said Kat Calvin, executive director of the progressive group Spread the Vote. “The only solution from what I can see is that people have to get angry. We have to get people to the polls. There is no one coming to save us.”