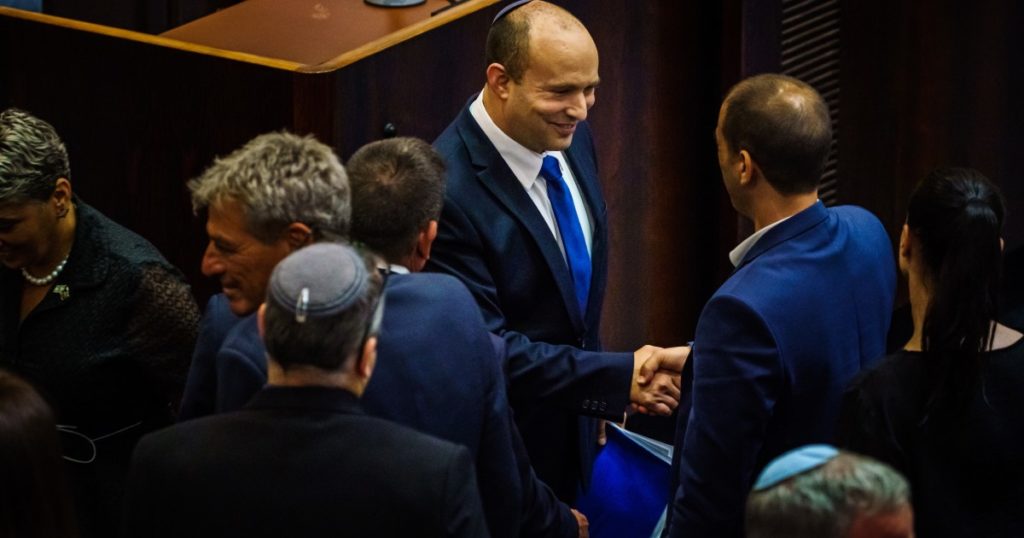 The Biden administration wasted no time in embracing the new government of Israel.

The politics of Israel’s new prime minister, Naftali Bennett, are no more agreeable to President Biden than those of the unseated Benjamin Netanyahu — including the rejection of both a Palestinian state and any agreement with Iran.

But style and temperament suddenly make a major difference.

“You don’t have to sit in Washington to hear the sigh of relief in the White House as Netanyahu gives his farewell speech,” Ori Nir, spokesman for the progressive pro-Israel group Americans for Peace Now, said on Twitter as the longest-serving Israeli prime minister took his leave, hurling invective in many directions, on Sunday.

“It’s not Bibi. That’s the beginning and end of it,” Natan Sachs, director of the Middle East policy center at the Brookings Institution in Washington, said in an interview Monday, using Netanyahu’s nickname.

In a way, Netanyahu himself deserves full credit for laying the groundwork for a much-improved relationship between Israel and Washington.

In inflammatory and self-aggrandizing rhetoric in the final moments of his rule, he blamed Biden and every U.S. president back to Franklin D. Roosevelt — except for his friend Donald Trump — for endangering the state of Israel. That only confirmed to many in Washington what they already believed: that he was not a reliable partner.

Commentators from the Potomac to the Dead Sea noted the speed with which Biden, and most other senior officials in his government, telephoned Bennett or his coalition partners with “warm” congratulations, as the White House put it.

Biden spoke to Bennett shortly after the Knesset, the Israeli parliament, confirmed the new coalition government by a single vote on Sunday. Earlier this year, Biden had pointedly waited weeks to telephone Netanyahu as part of the round of calls a new president traditionally makes to other world leaders.

“My administration is fully committed to working with the new Israeli government to advance security, stability and peace for Israelis, Palestinians and people throughout the broader region,” Biden said in describing the call he made from England, where he was on his first trip abroad as president. “Israel has no better friend than the United States.”

Secretary of State Antony J. Blinken telephoned his counterpart, Yair Lapid, who will take over as prime minister in two years.

“We look forward to strengthening all aspects of the U.S.-Israel partnership and working together for a more secure and prosperous future,” Blinken said in a statement after the call, also made from England where he was accompanying Biden.

The secretary of State traveled to Jerusalem and the West Bank city of Ramallah last month to shore up a cease-fire in the latest war between Israel and the militant Hamas group in Gaza. His trip was also to reestablish ties with the Palestinian leadership that Trump had severed and to reopen an American diplomatic mission in Jerusalem for Palestinians.

Blinken was the first U.S. leader to meet with senior Palestinian officials in five years, after a Trump attempt to isolate, sideline and punish Palestinians in favor of Israelis.

The new ruling coalition is unlikely to embark on dramatic foreign policy shifts. It is led by Bennett, 49, a religious nationalist, and Lapid, 57, a secular centrist former television talk show host who cobbled together the ideologically diverse political grouping that ended Netanyahu’s long reign. The new government also won’t likely do much to revive efforts to resolve the decades-old Israeli-Palestinian conflict.

But U.S. administration officials expect it to be a more trustworthy and less manipulative partner.

“The mistrust that characterized the Biden administration’s relations with Netanyahu is gone,” said analyst Yohanan Plesner, who heads the nonpartisan Israel Democracy Institute in Jerusalem.

But Plesner and others cautioned against expecting the U.S. and Israel to find consensus on tougher issues.

The Biden administration and the new Israeli government, for example, will continue to diverge deeply on Iran. The United States is deep in negotiations aimed at returning to a landmark Iran nuclear deal that Trump sought to destroy but that had succeeded in containing Tehran’s nuclear ambitions. Israel, however, sees Iran as an existential threat.

Still, Plesner said, talks surrounding the matter with a Bennett-led government would be “serious and discreet,” with little chance of grandstanding on the Israeli side that became so familiar under Netanyahu.

“And the way they deal together with the Iranian challenge will very much set the course,” Plesner said.

Sachs, of Brookings, said Bennett will remain hawkish on issues like Iran and a Palestinian state but will be amenable to “smaller things” such as easing economic restrictions on Palestinian territories.

“Despite significant differences, he wants to set out on the right foot with Biden,” Sachs said. “He is not about to become a two-stater, but he sees room for productive steps on a lower level” achieved quietly and without “the public rows.”

Netanyahu worked with Trump to shift pro-Israel policies away from the bipartisan support enjoyed in the U.S. for decades to a hard-core Republican base, including white Christian Evangelicals with an end-times vision. That was unforgiveable among many in Biden’s orbit, as well as among progressive American Jews.

Many in Biden’s administration are veterans of the Obama years, when Netanyahu paid the ultimate insult to a sitting president. In 2015, Netanyahu went around the White House to speak before Congress at the invitation of a Republican member, an unheard-of breach of protocol. He used the speech to attack Obama and his efforts to negotiate a nuclear deal with Iran.

Lapid, who will be the more conciliatory interlocuter with the Biden administration, on Monday minced few words in critiquing the Netanyahu government’s approach to diplomacy, telling envoys at a handover ceremony at the Foreign Ministry that Israel’s international ties had been afflicted by “disgraceful neglect.” He said fence-mending efforts with Democrats and with American Jews would be a priority.

“The outgoing administration took a terrible gamble in focusing only on the Republicans and abandoning Israel’s bipartisan standing,” Lapid said.

Palestinians were happy to see the end of the Netanyahu era, but far from enthusiastic about the new Israeli leadership.

Palestinian Authority Prime Minister Mohammad Shtayyeh called Netanyahu’s time in office a “dark chapter in the history of the conflict,” but emphasized that the new government was not seen as “less dangerous than its predecessors.”

Bennett’s background as a settler leader, his calls for the annexation of most of the West Bank and other incendiary anti-Palestinian rhetoric has fueled particular concern and will complicate a more public relationship with Washington, such as any visits to the Oval Office.

The long-term stability of Israel’s new government is also a looming question. Its unparalleled diversity, including leftist and right-wing Israelis and even a Palestinian party, raises doubts about how long it can last.

But, Israelis said, the point was to oust Netanyahu. And the longtime premier, as several Israeli commentators said, remained “Trumpian” to the end.

His refusal to attend the formal inauguration of his successor, said veteran political affairs commentator Yossi Verter, came across as “sour, grumpy, not stately.”

King reported from Jerusalem and Wilkinson from Washington.