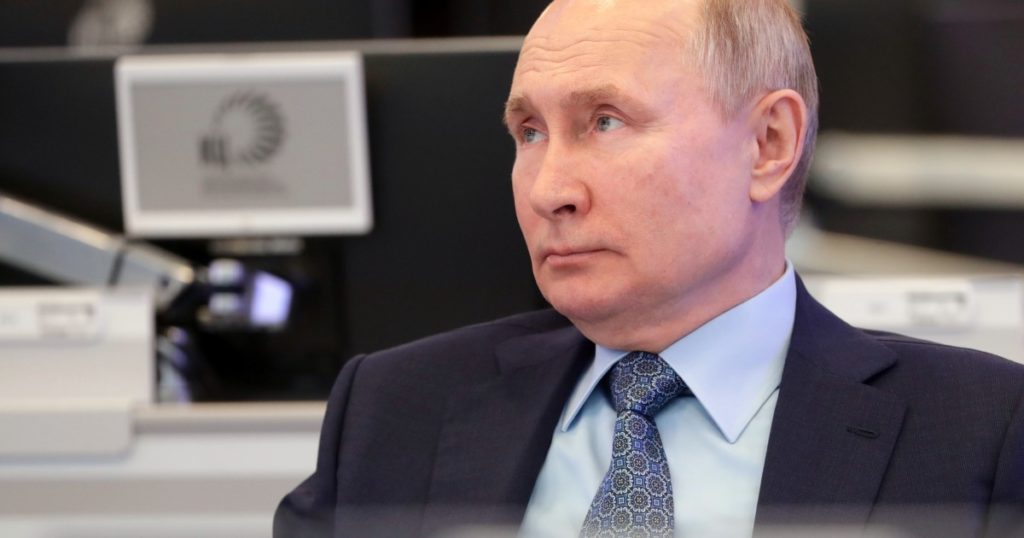 In its first attempt to punish Moscow’s attacks on U.S. elections and cyber networks, the Biden administration on Thursday announced stinging economic sanctions against a host of Russian companies and individuals as well as the expulsion from the U.S. of 10 Russian intelligence officials.

As part of the punitive broadside, the U.S. for the first time officially blamed Russian intelligence for last year’s massive cyberattack on federal agencies and private companies.

The sanctions won rare bipartisan support in Washington, but it remained unclear what impact they would have on a Kremlin that has remained for the most part impervious to outside pressure.

Thursday’s announcement came two days after President Biden spoke to Russian President Vladimir Putin by telephone, to both warn and cajole. He cautioned that the U.S. and Europe would not stand for Russia’s massive military buildup on its border with Ukraine. And he invited his Russian counterpart to a summit in a third country.

Such a summit is probably on hold now. Kremlin spokesman Dmitry Peskov, reacting in Moscow, told reporters that the sanctions are illegal, would invite “reciprocal” actions and were not conducive to a meeting of the two presidents. He also suggested Putin might withdraw his participation in next week’s climate conference hosted by the U.S.

The sanctions imposed Thursday had been anticipated for some time. The targets include Russian hackers believed responsible for infecting computer software widely used by government and private networks in the U.S., including the Treasury, Energy and Homeland Security departments, as part of what was called the SolarWinds breach. U.S. officials, who are still calculating the damage done and how to prevent it, alleged it was part of an intelligence-gathering mission to accrue U.S. secrets for the Russian government.

The officials also said Putin ordered cyber and disinformation campaigns to help former President Trump in his unsuccessful bid for reelection. Russian intelligence operatives spread conspiracy theories to undermine faith in the process and then fanned a false narrative of widespread fraud, the Treasury Department said.

The 10 Russian diplomatic staff who were expelled included members of the Russian intelligence services, the White House said.

Sanctions will punish six Russian companies involved in cyberespionage and 32 people and entities involved in election interference, the Treasury Department said. All the targets will be barred from doing business with U.S. entities, and any assets they have in the U.S. will be frozen.

Among those named was Konstantin Kilimnik, a Russian and Ukrainian political consultant known to have worked for Russian intelligence services. With the allegation against him, Thursday’s announcement added a new detail to the story of Russian interference in the 2016 presidential election in which Trump won the electoral college vote.

According to the Biden administration, Kilimnik provided Russian intelligence with “sensitive information on polling and campaign strategy.” Kilimnik, an alleged Russian agent, is an associate of Paul Manafort, Trump’s campaign chairman in 2016.

Although it was previously known from special counsel Robert S. Mueller III’s investigation that Manafort provided campaign information to Kilimnik, U.S. officials had not said what they believe he did with it. Trump last year pardoned Manafort, who had been convicted of bank fraud, tax evasion and illegally lobbying for Ukraine and had resisted cooperating with Mueller’s investigators.

The 10 Russian diplomatic staff who were expelled included members of the Russian intelligence services, the White House said.

Thursday’s sanctions did not come in response to reports that Russian operatives paid Taliban militants to hunt and kill U.S. and allied troops in Afghanistan, officials said. However, for the first time, a senior administration official said that the U.S. intelligence community now had “low to moderate” confidence that the reports were true.

The limited confidence in the information, the official said, was because much of it came from detained militants in Afghanistan and could not be verified given the countrywide violence.

“These actions are intended to hold Russia to account for its reckless actions,” Secretary of State Antony Blinken said in a statement. “We will act firmly in response to Russian actions that cause harm to us or our allies and partners.”

Nevertheless, he and other U.S. officials said they still hoped for a “more stable and predictable” relationship with Russia despite it having reached a historic post-Cold War low point.

“We have no desire to be in an escalatory cycle with Russia,” said a senior administration official who briefed reporters on condition of anonymity. “We do not seek a downward spiral.”

Yet a downward spiral seemed likely. Past such actions have triggered a tit-for-tat series of reciprocal expulsions of both U.S. and Russian diplomats. Putin also might react by deepening his military threats against neighbors like Ukraine, experts said.

By Thursday evening, the U.S. ambassador in Moscow, John Sullivan, was summoned to appear before the Russian Foreign Ministry. The conversation “will be difficult for the American side,” ministry spokeswoman Maria Zakharova said. “Such aggressive behavior will undoubtedly receive a decisive rebuff, and the response to sanctions will be inevitable.”

Imposing sanctions on Moscow is a frequent punishment that has done little to rein in Putin, experts say. It remained unclear whether the Biden batch will have more impact.

Even under Trump, who admired Putin, Washington sanctioned Russia in some of the harshest actions since the Cold War, including the expulsion from the United States of 60 suspected Russian spies in March of 2018 and the closure of several Russian consular offices six months earlier — among them the historic consulate general in San Francisco. Much of that punishment was meted out despite Trump’s opposition, according to former administration officials.

Targeting Russia’s sovereign debt has a “broader chilling effect” by raising borrowing costs and stunting growth, a senior administration official said. “This is the main market that finances the Russian government.”

“It is long overdue that Vladimir Putin and his thugs suffered the consequences of their malign behavior that for too long went unchecked,” Sen. Jeanne Shaheen (D-N.H.), a member of both the Foreign Relations and Armed Services committees, said.

Rep. Adam B. Schiff (D-Burbank), who as chair of the House Intelligence Committee oversaw much of the probe of Russian cyberspying, praised Biden’s actions but said sanctions alone “will not be enough to deter Russia’s misbehavior,” adding the U.S. government had to take urgent steps to strengthen its cyberdefenses.

Rep. Michael McCaul of Texas, the lead Republican on the House Foreign Affairs Committee, welcomed the sanctions but added he was “concerned they will ultimately fail to establish a credible deterrent.”

This is the second round of sanctions Biden has imposed on Russia. Last month, the U.S. targeted a group of Russian officials and government agencies over a nearly fatal nerve agent attack on opposition leader Alexei Navalny. Around the same time, Biden was asked in a television interview whether he thought Putin was a killer.