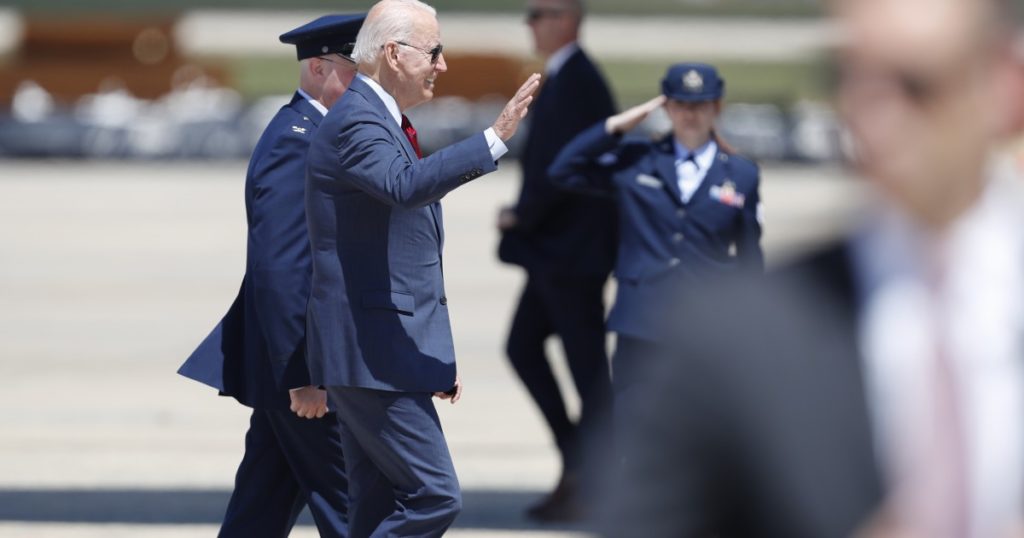 The incentives multiply as President Biden scrambles to entice more Americans to get inoculated against COVID-19, particularly younger people who believe they are less at risk, as the country is expected to fall short of his vaccination goal for the July 4 holiday after surpassing earlier ones.

The urgency of the administration’s inoculation campaign is increasing as the Delta variant, a more contagious strain of the coronavirus that was first detected in India, spreads through communities with low vaccination rates.

“If you’re vaccinated, you’re safe,” the president said Thursday after visiting a mobile vaccination unit in Raleigh, N.C. “You’re still at risk of getting seriously ill or dying if you, in fact, have not been vaccinated.”

He added, “There’s no reason to leave yourself vulnerable to this deadly virus for one single day more.”

Biden’s trip is one part of a full-court press from the White House to encourage holdouts to get their shots. First Lady Jill Biden and Dr. Anthony Fauci visited two vaccination sites in Florida on Thursday, after she made a similar trip this week to two other southern states.

Vice President Kamala Harris held a virtual meeting with community groups and her husband, Doug Emhoff, hosted a conference call with Surgeon General Vivek Murthy after returning from a trip to promote vaccinations in Chicago on Wednesday.

The 80-year-old Fauci, the federal government’s top infectious disease expert, is taking his case directly to Generation Z as well. He’s recorded interviews with Instagram influencers that are expected to be released in the coming days.

Biden set July 4 as a symbolic deadline for marking “our independence from this virus,” and plans to mark the occasion by hosting a party on the South Lawn of the White House with military service members, healthcare workers and others. The White House is also encouraging state and local officials to organize events “to honor our freedom, salute those who have been serving on the front lines, and celebrate our progress in fighting this pandemic.”

However, the country is expected to fall short of Biden’s goal of getting 70% of Americans to receive at least one shot by the Fourth. Administration officials said they expect to hit the target only for Americans who are at least 27 years old, meaning younger people are lagging.

“The reality is, many younger Americans have felt like COVID-19 is not something that impacts them and they’ve been less eager to get the shot,” Jeff Zients, who leads Biden’s COVID-19 task force, told reporters Tuesday. “However, with the Delta variant now spreading across the country and infecting younger people worldwide, it’s more important than ever that they get vaccinated.”

With the Delta variant spreading, “we could really start to see surges starting to occur in some of these southern states,” said David Eisenman, professor in residence at the UCLA Fielding School of Public Health.

The Delta variant, also known as B.1.671.2, is expected to replace the Alpha variant, which was first detected in the United Kingdom and is also referred to as B.1.1.7, as the dominant version of the coronavirus in the United States. The Delta variant accounts for 1 in 5 cases nationwide, but roughly half the cases in some areas of the Midwest where vaccination rates are lower.

Though the Delta variant is more contagious, vaccines are considered to be effective protection. The risk is that uncontrolled spread among unvaccinated people could lead to an even more dangerous version of the virus.

“The whole point of why we want to stamp out variants is, the more the virus replicates, the more it mutates,” Eisenman said.

The U.S. vaccination campaign focused first on the elderly, and now nearly 80% of people 65 and older are fully vaccinated. The federal government opened mass vaccination sites to deliver thousands of shots per day, and everyone 16 and older became eligible to get a shot by mid-April. Vaccines were later approved for adolescents as young as 12 in May. More than 150 million Americans are fully vaccinated, and both hospitalizations and death rates have plummeted.

Lately the effort has focused on combating vaccine hesitancy, particularly among Republicans, and making the shots even more accessible.

She also said the government should use more targeted messages to appeal to different demographic groups. “It’s about earning the confidence of groups that have a variety of different reasons they aren’t being vaccinated,” she said. “There’s no magic bullet.”

For example, Schoch-Spana added, “There is no single approach that’s going to work for rural white Republicans and young people from communities of color.”

The first lady has been taking aim at the perception among some skeptics that the COVID-19 vaccines were rushed, emphasizing that their development drew on years of work predating the pandemic.

“I asked some of the experts, and I was surprised to learn that while these vaccines might be new, the research behind them is not,” she said at a drive-through vaccination site in the Orlando area.

“But if you still have questions, and you may, that’s OK. Call your doc,” she added. “This is your choice, get informed.”

Earlier in the week, she went to vaccination sites at a college campus in Mississippi and a distillery in Nashville. At her first stop, she comforted a middle school student who was afraid of needles, saying, “I’m afraid too.” And at the second, she warned about vaccine misinformation and encouraged people to get their shots.

“What else do you want?” Biden said. “They’re safe, effective and they’re free.”

Then country star Brad Paisley sang a couple of songs, starting with a cover of Dolly Parton’s “Jolene,” but with some revised lyrics.