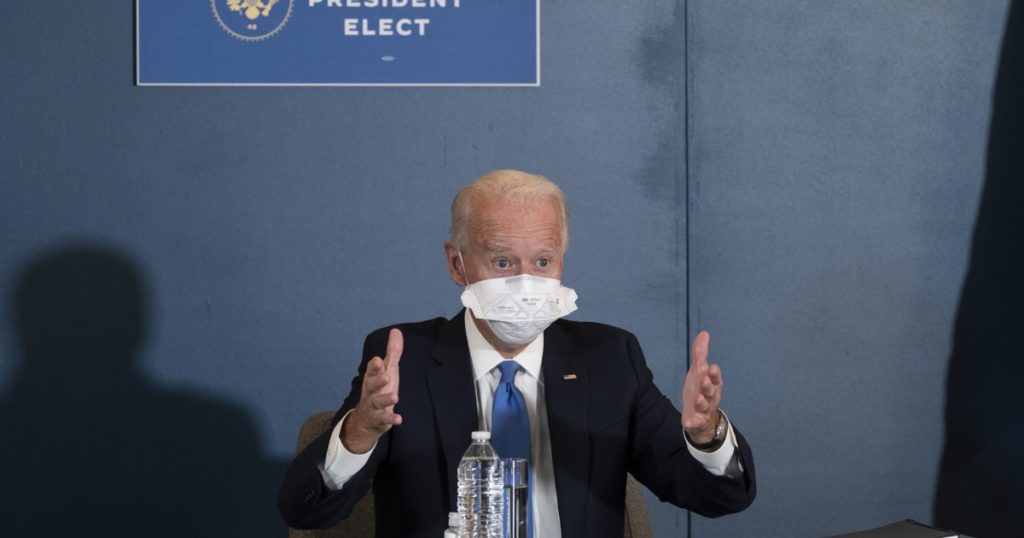 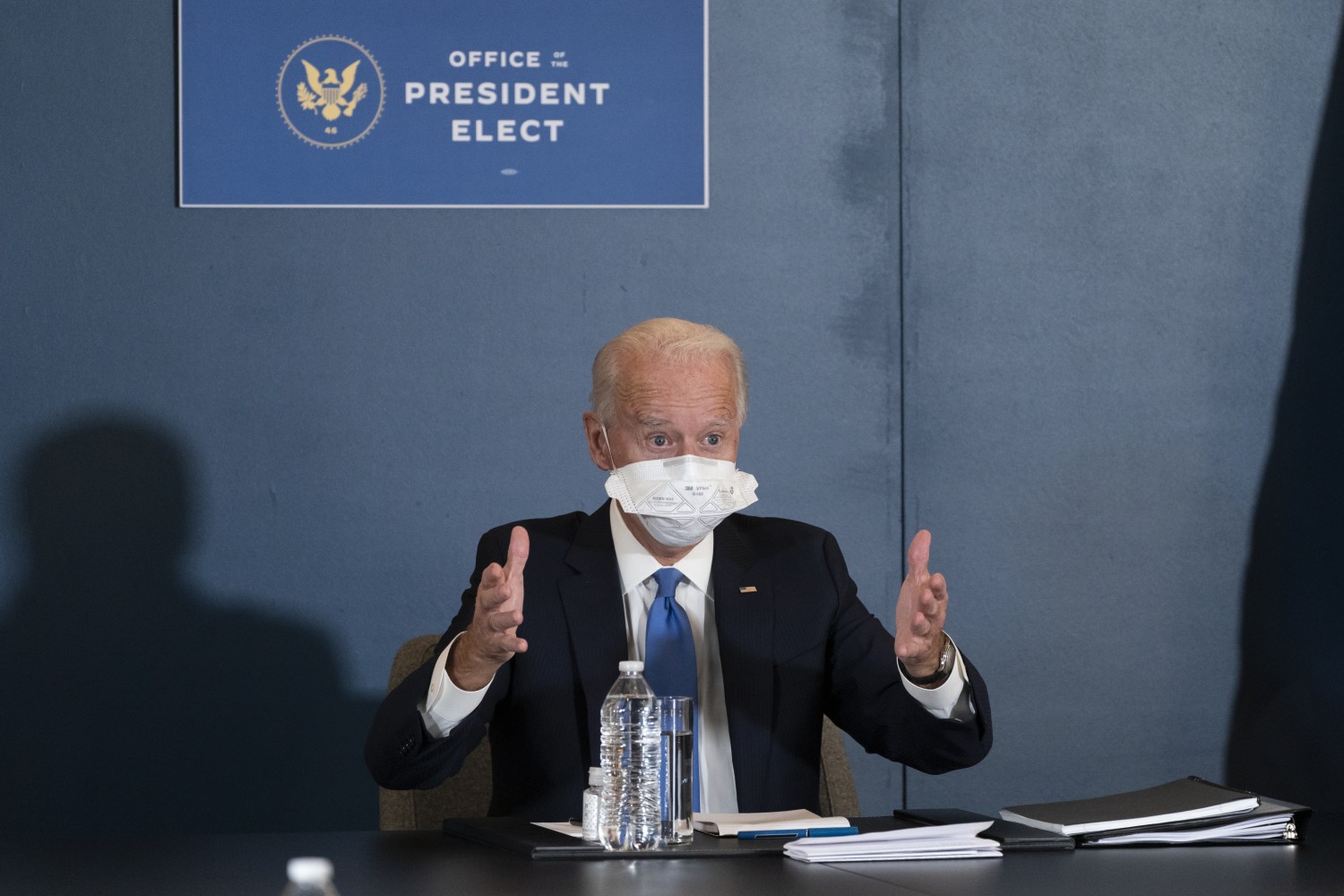 Despite outlining a detailed agenda on his website, President-elect Joe Biden’s campaign often focused less on policies than his temperament and character, seeking to make the election a referendum on President Trump’s four years in office.

Now that Biden has been announcing Cabinet appointments before taking office Jan. 20, attention is turning to how he will govern. A review of Biden’s speeches, campaign website and interviews suggests that his administration’s priorities are a mix of rolling back Trump administration actions, expanding on President Obama’s initiatives and advocating for such progressive policies as criminal justice reform and investing in green jobs.

In that regard, Biden’s platform embodies the same broad, compromise-driven coalition that won him the White House.

On the coronavirus, Biden has repeatedly said he will give priority to advice from public health experts and let them drive America’s pandemic response.

Unlike Trump, Biden has been a vocal advocate for broader use of face masks to reduce the spread of infection, a position broadly backed by public health officials.

During the speech in which he introduced Sen. Kamala Harris as his running mate, he pledged that his administration would offer “a comprehensive plan to meet the challenge of COVID-19 and turn the corner on this pandemic.” Among the elements he cited were “masking; clear, science-based guidance; dramatically scaling up testing” and “giving states and local governments the resources they need to open schools and businesses safely.”

He has also said that “scientists and public health experts should decide on [the] safety and efficacy” of any vaccine. “The White House should not weigh in on these matters or push the FDA to provide emergency authorizations prematurely,” he said in a statement in late July.

More recently, he has urged Congress to provide economic relief and public health funding, and for Trump to coordinate with his incoming officials on a vaccine distribution plan, warning that “more people may die if we don’t coordinate.”

Biden made tackling climate change a centerpiece of his campaign, proposing to invest $2 trillion in a massive green-jobs program to build renewable energy infrastructure. He’s also promised to restore environmental protections undone by the Trump administration and rejoin the Paris climate agreement, committing to the pact’s goal of preventing global average temperatures from rising more than 2 degrees Celsius (35.6 Fahrenheit).

His climate plan calls for ending the use of fossil fuels to generate electricity by 2035. By no later than 2050, his plan would bring the country to net-zero emissions of greenhouse gases.

Biden plans to bring longtime colleague John Kerry into the White House to serve as a special envoy for climate on the National Security Council, reflecting Biden’s pledge to boost U.S. efforts to battle climate change.

Biden’s climate change policies became more ambitious over the course of his campaign as he worked to win the support of climate activists, young people and voters who backed Sen. Bernie Sanders of Vermont in the Democratic primary. At the same time, he tried to quiet fears from Democrats in Pennsylvania by assuring them that fracking, or hydraulic fracturing, will continue.

During the Democratic primaries, Biden diverged from many of his rivals by rejecting calls to move all Americans onto a single government health plan through “Medicare for all.”

Biden, who as vice president was a strong supporter of President Obama’s push to enact the Affordable Care Act, instead argued that expanding the 2010 law and keeping a mix of government plans and employer-based insurance would be more practical, less costly and less disruptive.

Even so, he has called for a public option: a Medicare-like plan that would be available to Americans who cannot afford commercial insurance or live in a state that hasn’t expanded Medicaid eligibility. Biden favors increasing subsidies to help Americans purchase plans on insurance marketplaces created by the Affordable Care Act.

Like most Democrats, Biden is a strong supporter of abortion rights.

On guns, Biden supports universal background checks and a ban on the manufacture and sale of semiautomatic rifles and higher-capacity magazines, along with tighter regulation or the buyback of those weapons currently in private hands.

He also supports restricting gun purchases and possession by fugitives, people convicted of hate crimes and those deemed unable to manage their own affairs, as well as banning online sales of weapons and ammunition and requiring background checks for people buying gun kits or 3D printer codes for guns.

Biden has backtracked from the tough-on-crime positions he took during his decades in the Senate by advocating for progressive reforms designed to limit the use of force by police, while rejecting left-wing calls to “defund” or dismantle local police departments.

In his campaign platform, Biden supported increased funding for “community-oriented policing” and hiring police forces that reflect the racial makeup of the communities they serve. He also proposed pairing police with social workers and experts on mental health, substance abuse and disability.

Biden has said he will reverse the Trump administration’s position on consent decrees and expand the Justice Department’s oversight powers of troubled local departments to include “systemic misconduct by prosecutors’ offices.” Biden has also called for reducing prison populations, including by eliminating mandatory minimums, decriminalizing marijuana use and diverting drug users away from prisons and toward treatment programs.

Biden’s campaign laid out plans to close the wealth gap between Black and white Americans and combat inequities in the criminal justice system, the economy, housing and other areas; although he wasn’t an outspoken champion of paying reparations to the descendants of enslaved Africans.

He’s said he wants to create a $30-billion Small Business Opportunity Fund to help kick-start public-private developments in communities of color. And Biden plans to invest in programs that increase home ownership among families of color — including creating a new tax credit of up to $15,000 to help lower- and middle-income families buy their first home — and fine-tune Trump’s “Opportunity Zone” program to make it more effective at spurring economic development in low-income areas.

Biden has also said he will direct the Justice Department to prioritize the prosecution of hate crimes, which have sharply surged during the Trump presidency, and promised to appoint the first Black woman to the Supreme Court.

Biden’s proposed immigration platform aims to undo what he calls Trump’s “misguided policies.” He campaigned on a a pledge to reverse the president’s efforts to curb immigration and limit protections for immigrants in America both legally and illegally.

He’s said he’ll work with Congress to establish a pathway to citizenship for the roughly 10.5 million people who are in the U.S. illegally and that he supports compromise legislation for farm workers that would potentially offer them a fast track to citizenship.

Biden has also said that he will end Trump’s national emergency declaration that rerouted billions in federal funds to the border wall. He would instead direct those resources toward improving security at ports of entry.

Biden plans to address the root causes of immigration from Central America through a four-year, $4-billion plan with Guatemala, Honduras and El Salvador that would target corruption, invest in civil society organizations and require the three countries to allocate resources toward reducing poverty, insecurity and violence.

Biden has said he will restore the United States to a leadership role on the world stage, strengthening ties with allies and standing up to adversaries. This would reverse Trump’s “America first” doctrine, which has seen America retract from many of its global spheres of influence.

Biden says he will attempt to resuscitate the Iran nuclear deal and revive Obama-era changes to America’s relationship with Cuba, which ended half a century of Cold War hostilities and reopened diplomatic ties before Trump reversed the changes. On the Israeli-Palestinian conflict, Biden has reportedly known and gotten along well with Israeli Prime Minister Benjamin Netanyahu and would not undo Trump’s controversial relocation of the U.S. Embassy to Jerusalem.

Although both Trump and Biden initially approved of the U.S.-led war in Iraq that started in 2003, during the race they essentially agreed on withdrawing troops from several war zones, including Afghanistan.

Biden has pledged to resume full U.S. participation in various multilateral organizations, from NATO to the United Nations. Biden has said that he will nominate Linda Thomas-Greenfield to be U.S. ambassador to the United Nations. A Black woman and former U.S. ambassador to Liberia, she was assistant secretary of State for African affairs under Obama.

Although Biden and Trump agreed that the U.S.-China trading relationship isn’t working to America’s advantage, Biden’s strategy in addressing those grievances is expected to be more consistent and rely on building alliances to deter Beijing, rather than engaging in a trade war.

However, that doesn’t mean Biden will be rushing to rejoin the Trans-Pacific Partnership. The initial 12-nation trade deal was forged under President Obama when Biden was vice president, but the deal never gained much support from Democratic lawmakers and progressives in the party. Biden has distanced himself from the pact, saying only that he would not back it in its current form.

Biden has not endorsed progressive calls to “break up Big Tech,” although some experts expect him to be an active antitrust enforcer. He’s also called for Section 230, the law that governs social media policies around content moderation, to be revoked.

Biden has pledged to expand broadband or wireless 5G to every American, including through a $20-billion investment in rural broadband.

Biden’s education platform focused on college affordability and the student debt crisis; he also promised to reinstate many Obama-era guidelines that Trump rolled back, such as those governing sexual misconduct.

Biden supports “providing two years of community college or other high-quality training program without debt for any hard-working individual.” Under his program, the federal government would cover three-quarters of the cost, with states generally covering the rest.

He endorsed tuition-free public college for families earning under $125,000 and proposed forgiving all undergraduate federal student debt from two- and four-year public schools for debt-holders making up to $125,000.

Biden has promised to reinstate the “Affirmatively Furthering Fair Housing” rule, a policy Trump scrapped that required communities to build low-cost units in neighborhoods where they can relieve racial segregation in housing.

In the long term, Biden has pledged a sharp increase in Section 8 rent subsidies to ensure they’re available to all Americans whose income is low enough to qualify and said he will establish a $100-billion affordable housing fund to finance the upgrading of housing for low-income Americans.