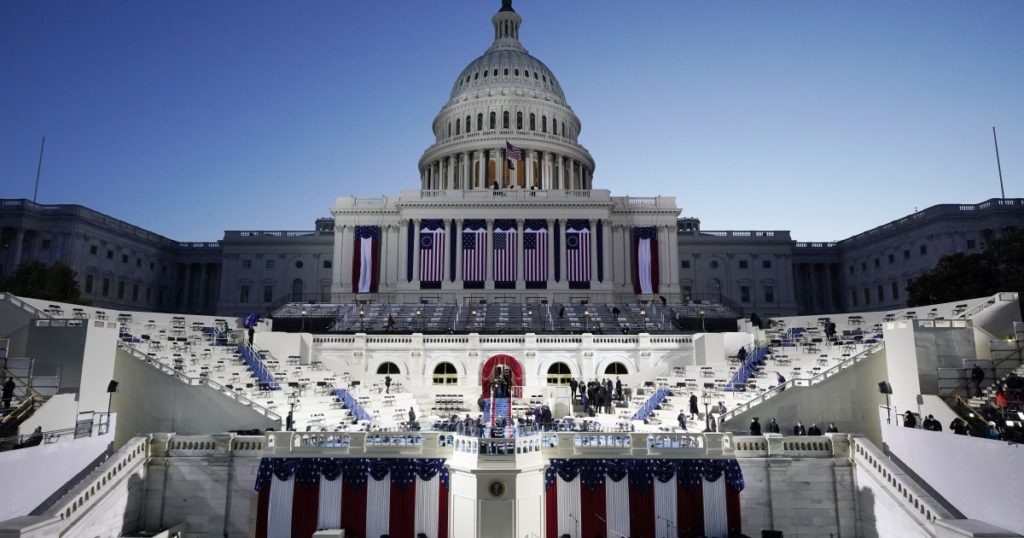 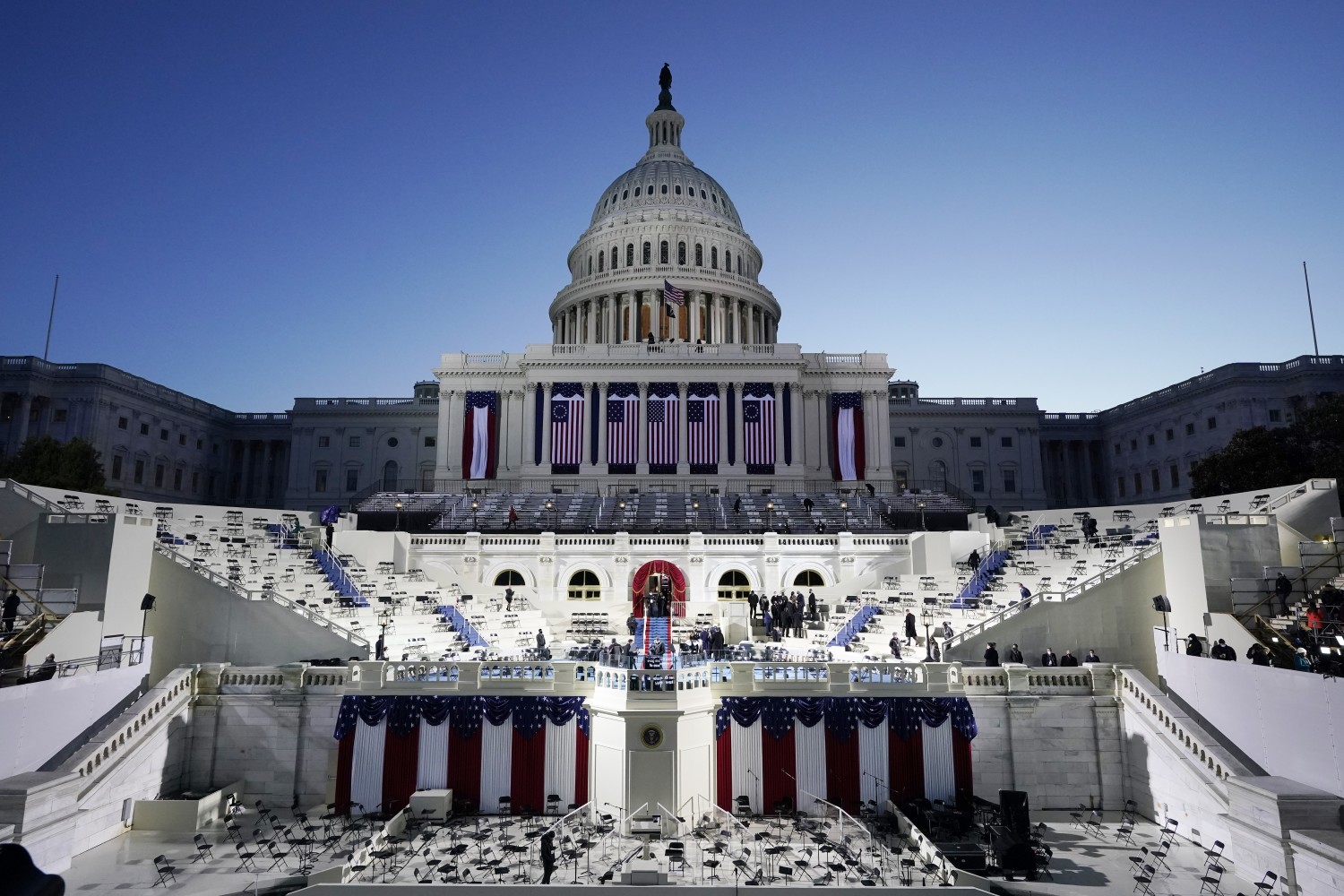 Joseph Robinette Biden Jr. is poised to become the 46th president of the United States Wednesday just hours after his predecessor left the White House, clearing the way for a beleaguered nation to turn the page on one of the most divisive chapters in its political history.

Biden will also bear witness to history as Kamala Harris is sworn in as the nation’s first woman, person of color and South Asian American to become vice president.

President Trump was set to fly to Florida, making one last trip from Joint Base Andrews on Air Force One to West Palm Beach after a farewell rally at the airport, and breaking one last norm — dispensing with the 152-year-old rituals of a peaceful transfer of power by declining to greet his successor at the White House and then attend the inauguration. He left the White House for the last time shortly after 8 a.m., departing on Marine One for the brief ride to the air base.

There, before boarding the iconic plane, he told a smaller-than-expected crowd of family members, aides and supporters, “This has been an incredible four years. We’ve accomplished so much together.”

“We will be back in some form,” Trump said in closing, seeming to hint as he has before of perhaps seeking the presidency again in 2024.

Rarely has a new president had less need for an orientation to the White House: Biden, at 78 the oldest man to become president, brings to the job 50 years of governing experience as senator and vice president. He has run for president three times in the past 33 years. Now he takes on the job of his dreams, but at a nightmarish time of health, economic and societal crises.

In his inaugural address, Biden will claim a daunting mandate to end a worsening pandemic, repair an economy ravaged by it and issue a call for national unity in the face of sometimes violent divisions, advisors say. He is also expected to sound a note of optimism to a country that has been on the ropes since COVID-19 hit 10 months ago, and to a Capitol still reeling from an attempted insurrection by Trump supporters who ransacked the building just two weeks ago while lawmakers were ratifying Biden’s election.

He aims to set a markedly different tone than four years ago, when Trump in his inaugural address evoked a dark vision of “American carnage,” a country racked by poverty, industrial decline, drugs and crime.

Biden was to start his day with the show of bipartisanship that Trump denied him, by attending a morning Mass with Congress’ Republican leaders — Sen. Mitch McConnell of Kentucky and Rep. Kevin McCarthy of Bakersfield, who declined to attend Trump’s farewell rally and thereby underscored his isolation in the final days of his presidency.

Once inaugurated, Biden will immediately upend some of Trump’s most controversial federal policies by issuing a raft of executive orders on the environment, immigration and other areas. The new president would have the United States rejoin the Paris climate agreement, and would rescind Trump’s order for the deportation of Dreamers. He will immediately reenter the United States into the World Health Organization, overhaul Trump’s restrictionist immigration policy and cancel his approval of the Keystone XL pipeline.

Biden will be taking the oath of office at the traditional venue, the West Front of the Capitol, which on Jan. 6 was teeming with rioters trying to break into the building. While now repaired, the setting has otherwise been transformed by the political, health and security threats rattling the country as the Trump era ends.

Biden’s view from the Capitol, looking across the National Mall to the Washington Monument, will be devoid of the hundreds of thousands typically in attendance. His audience will be limited to perhaps 1,000 socially distanced Americans, a precaution against spreading the COVID-19 virus that has killed more than 400,000 and ravaged the U.S. economy, and a protection against continued threats of violence by pro-Trump domestic terrorists.

An unprecedented deployment of military and law enforcement personnel stood guard, turning the area around the ceremonial site and the city beyond into an armed encampment.

For the first time in history, the incoming president will be joined on the inaugural platform with a vice president who is not a white man, a pivotal moment for a nation still struggling to end the racial disparities in politics, the economy and society. It is especially poignant for Black women who have been an important if underappreciated part of the Democratic Party.

Rep. Barbara Lee (D-Oakland), a longtime friend of Harris, said having her in the White House was “just a remarkable historic moment for me.”

“Black women have fought so hard to elect other people, to be part of this Democratic Party, to get people out to vote,” Lee said. “We never would be here had it not been for the work and the struggle and the fights that Black women oftentimes have led with Black men. She’s the right woman for the right time.”

Biden’s expected focus in his inaugural address on bringing people together would echo the message that he delivered from the very beginning of his presidential campaign: the need for national unity, to repair the racial divisions opened and exploited by Trump, to restore the soul of America.

Early in the campaign, before the pandemic hit, Biden’s message seemed to some a bit corny. As a septuagenarian white man in a younger, diverse field of presidential rivals, he seemed like a political anachronism.

But Biden proved remarkably prescient about what the American people would want and need after Trump. Many Democrats believe, in retrospect, that he might have been the only candidate who could have beaten Trump, and especially now seems uniquely equipped to meet the moment.

“This is what Joe Biden’s campaign for president was all about, which was a turning the page, ending a chaotic and divisive presidency, moving us forward,” said Sen. Chris Coons (D-Del.), who holds the Senate seat Biden long had, on CNN.

For many Americans, his vast government experience is reassuring as he leaps into multiple colliding crises. His signature ability to show empathy makes him uniquely suited to leading a country grieving 400,000 deaths to COVID-19.

Biden’s first stop arriving in Washington on Tuesday evening was a visit to the Lincoln Memorial to honor those dead, an emotional gesture that Trump never made. “Between sundown and dusk, let us shine the lights into the darkness … and remember all who we lost,” Biden said.