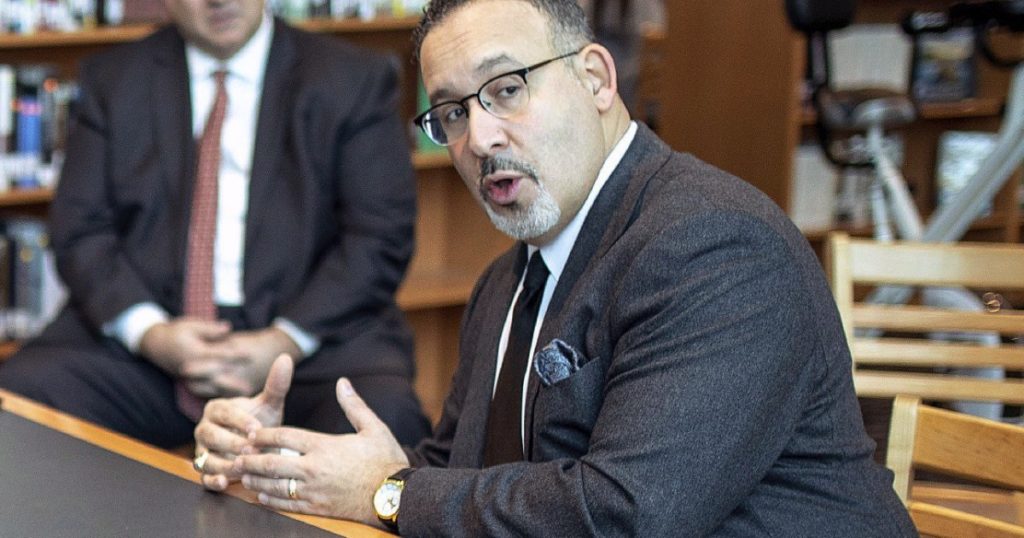 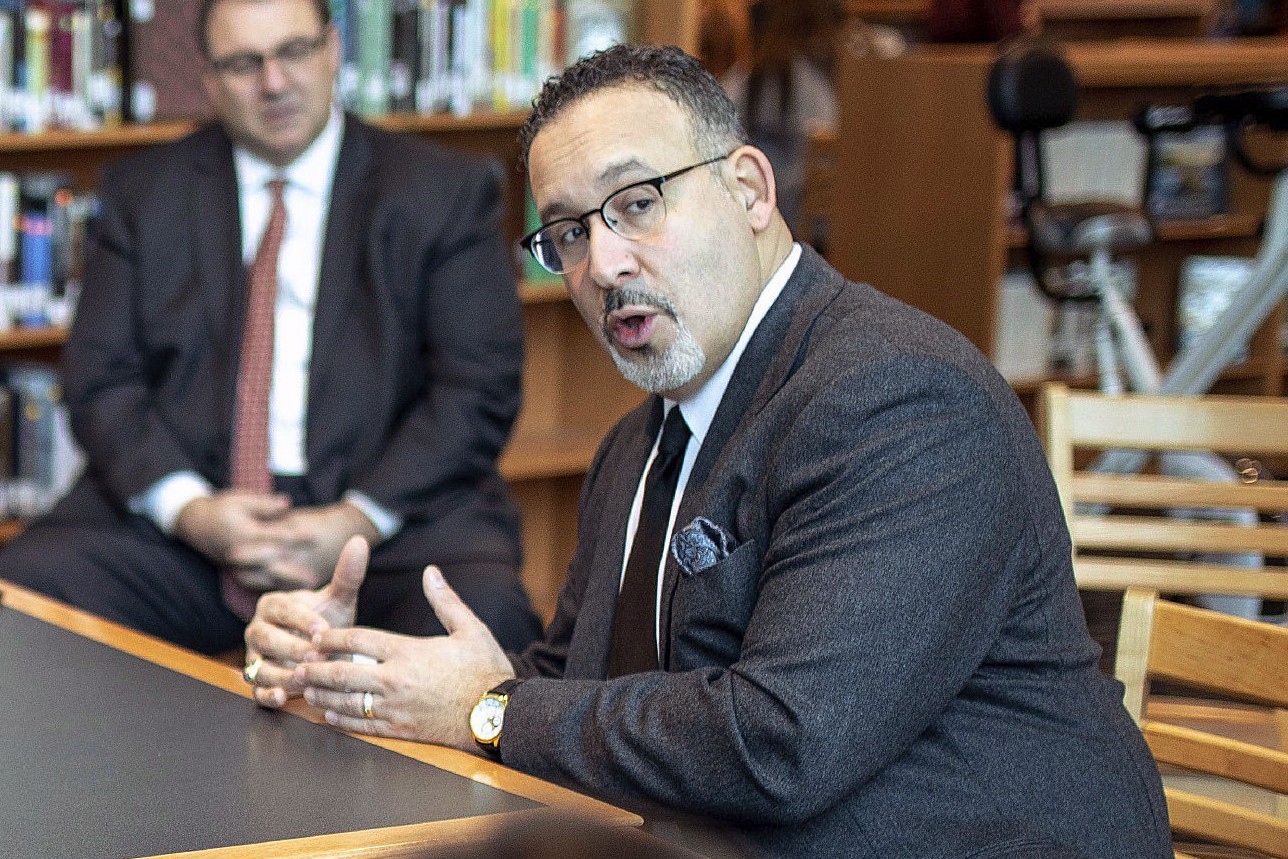 Joe Biden is poised to nominate Miguel Cardona as secretary of Education. The schools chief in Connecticut pushed to reopen campuses during the coronavirus pandemic and emerged as a consensus choice for the federal post with the backing of teachers unions and Latino activists.

The president-elect’s choice of Cardona, who is of Puerto Rican descent, would place a third Latino in a prominent position on his Cabinet as the president-elect works to make good on his promise to have a leadership team that reflects the diversity of the country. He earlier nominated California Atty. Gen. Xavier Becerra, who is Mexican American, to lead the Department of Health and Human Services. Cuban-born Alejandro Mayorkas was picked by Biden to lead the Department of Homeland Security.

The Congressional Hispanic Caucus had promoted Cardona’s candidacy for the job, and the National Assn. of Latino Elected and Appointed Officials applauded the choice.

Transition officials would not confirm the nomination, which was first reported by CNN. An announcement is expected this week.

Cardona stands out in the education world for his ability to navigate its contentious politics defined by heated and sustained battles over resources, testing, privatization and — more recently — the expectations placed on public schools amid a pandemic.

He has earned the respect of teachers groups and centrist organizations not always aligned with them. A product and longtime champion of public schools, Cardona’s life experience and career contrast sharply with that of current Education Secretary Betsy DeVos, a billionaire detested by education unions who has spent her tenure pushing school privatization.

Cardona’s career mirrors that of many other Biden nominees, who trend centrist. His biography and approach to governing closely resemble those of Becerra.

Like Biden, both Cardona and Becerra came from a humble background with parents who they say instilled in them an appreciation for the dignity of work and the prospect of upward mobility. They excelled in their careers not by aligning with the most strident activists but often by listening patiently to all sides. They distinguished themselves as coalition builders.

Cardona was born in a housing project in Meriden, Conn. His grandfather was a tobacco farmer with a second-grade education who moved the family to Connecticut from Puerto Rico. When Cardona entered elementary school, he spoke no English. But his later rise through the education system was dramatic.

During vocational school, Cardona attended college prep classes where he was often the only Latino in the room, he told the Connecticut Mirror in 2019. After college, he started teaching in his hometown and by 28 was the youngest school principal in the state.

As of early 2019, Cardona was still the assistant superintendent of the Meriden school. He became state schools chief later that year.

In Connecticut, the same teachers who clashed with Cardona over his push to keep schools open during the pandemic enthusiastically embraced the possibility he would lead the Education Department.

“He has been tested by the unprecedented upheaval caused by the pandemic,” said a statement from a coalition that included 60,000 Connecticut teachers and other unionized school officials. “While this challenge has been a rocky road — and many issues remain unresolved — teachers and school support staff have appreciated his openness and collaboration. If selected as Secretary of Education, Dr. Cardona would be a positive force for public education — light years ahead of the dismal Betsy DeVos track record.”

Cardona would be taking the helm of the department at a time the virus has pushed school districts into crisis and Biden will be championing a vastly expanded federal government role for them.

The president-elect has called for all public schools to resume in-person learning within his first 100 days in office. And he has promised to substantially boost federal funding for struggling public schools, with money targeted at expanding the number of social workers and psychologists in schools, building new infrastructure, and improving special education programs.

In Connecticut, Cardona pushed to keep schools open as unions objected based on safety concerns. He argued that school could remain safely in session with adequate staffing. Keeping public schools closed was particularly concerning to Cardona, who spent much of his career focused on expanding opportunity for children in low-income and marginalized communities like the one he came from.

“Public education is still the great equalizer,” Cardona said to state lawmakers during his confirmation hearing in Connecticut early this year.

During the pandemic, he has pushed to expand access to such children not just by keeping school doors open, but also by getting them the tools they need. Connecticut announced earlier this month it was the first state in the nation to provide a digital device and reliable at-home internet connection to every student in need.

“We are now leading the nation in removing the tech barriers that stood in the way of every child receiving a world-class education,” Cardona said in the announcement.

The battles Cardona would be stepping into at the federal level are intense. The clashes extend beyond when and how to reopen all public schools to long-standing tensions over the role of charter institutions in public districts, the extent to which students should be tested, and the push for more culturally literate classes. There is also the national movement — which Biden supports — to erase large amounts of student debt and provide tuition-free public college.

Cardona has moved cautiously through the rough and tumble politics of education. He told lawmakers in Connecticut that he saw charter schools as a “viable option” for parents seeking choice but that his focus would be on making traditional public schools better. He has expressed some concern that there is too much reliance on testing, a position that endears him to organized labor. And he champions Black and Latino studies courses. In June, Connecticut became the first state requiring high schools to offer them.

Beyond the raging battles over public schools, the job in Biden’s Cabinet would also place Cardona in the middle of a partisan fight over how colleges and universities should handle reporting of sexual assault.

The Trump administration worked aggressively to water down some of the Title IX victims’ rights measures that had been strengthened during the Obama era. Biden has promised to revive the more aggressive Title IX rules that DeVos scrapped, a politically charged undertaking that would fall to Cardona.