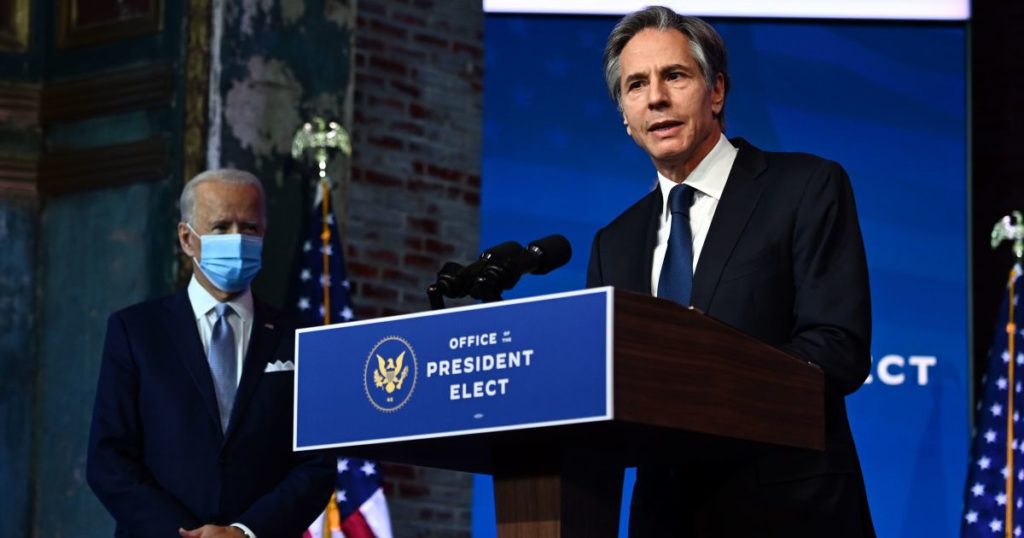 “We will show up again,” Blinken said in opening remarks as his Senate confirmation hearing got underway in the building that two weeks ago was the scene of a deadly pro-Trump riot. “Working across government and with partners around the world, we will revitalize American diplomacy to take on the most pressing challenges of our time.”

Blinken, a veteran diplomat and longtime senior advisor to Biden, is using his testimony before the Senate Foreign Relations Committee to underline a sharp distinction between his agenda and style, and his predecessors Michael R. Pompeo and Rex Tillerson.

Blinken, 58, is a firm believer in working closely with allies and in multilateral institutions, two principles largely discarded under the Trump administration. He is signaling an overhaul not just of policy but of the State Department, and advocating a return to broader consultation among government agencies ahead of decisions. That too is a practice largely discarded by Trump.

“The reality is that the world doesn’t organize itself. When we’re not engaged, when we aren’t leading, then one of two things will probably happen: Either some other country tries to take our place, but not in a way that advances our interests or values,” Blinken said. “Or, maybe just as bad, no one does, and then you get chaos. Either way, that does not serve the American people. Humility and confidence should be the flip sides of America’s leadership coin.”

The challenges awaiting Blinken, if confirmed, are extensive, including climate change, the rise of aggressive China and the Iranian nuclear threat. The Trump administration pulled out of the Iran nuclear deal and a broad trade agreement with much of Asia that would have served as a bulwark against China. For the environment, Biden has tapped former Secretary of State John Kerry as a kind of climate change czar.

While the agenda is ambitious and difficult to execute, the mission became more arduous following the Jan. 6 deadly riot at the Capitol, which unnerved world leaders.

As first order, Blinken and his staff will have to repair the battered image of the United States in foreign capitals and rebuild trust in Washington as a reliable partner.

“They are going to have to be prepared to show steadiness, discipline” and pursue, initially, a more limited agenda, said Gerald Butts, a former Canadian official who is vice chair of the Eurasia Group of risk analysts. “They will need to under-promise and overdeliver.”

Blinken’s confirmation hearing was one of several scheduled for key national security posts.

Blinken was expected to enjoy a fair amount of bipartisan support in his hearing. However, one divisive issue — Iran — came up in early questioning by Republicans, many of whom oppose rejoining the nuclear deal, which is expected to be an early priority for the new administration.