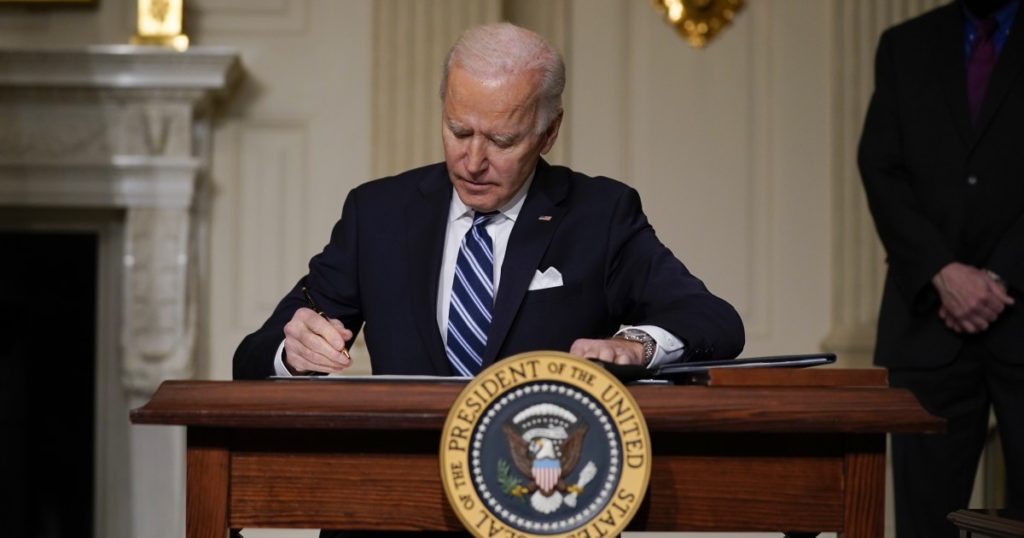 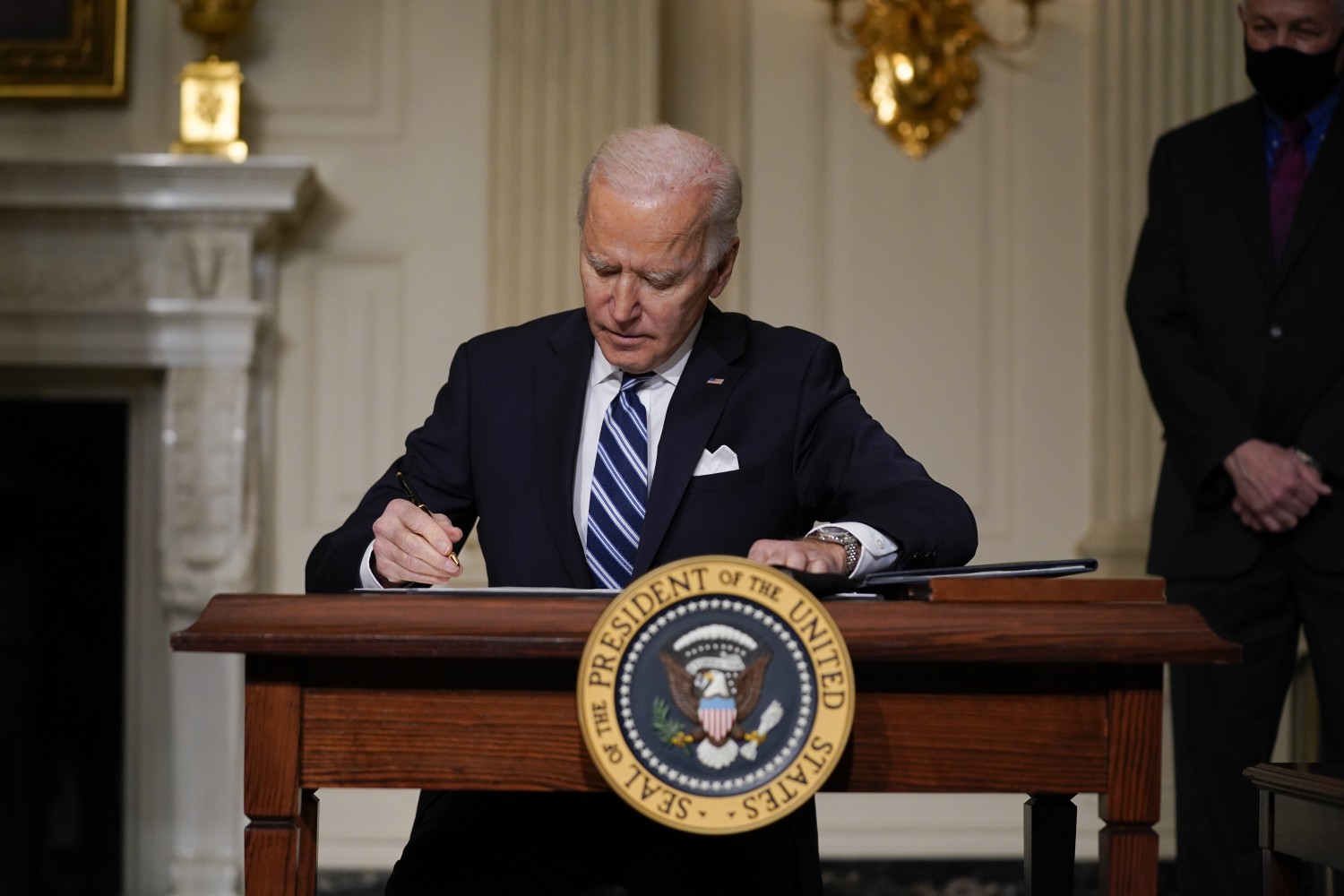 President Biden announced Wednesday a moratorium on new oil and gas leasing on public lands, one of a slate of executive actions to demonstrate his commitment to fighting climate change, despite opposition from the fossil fuel industry and many Republicans.

The move in effect hit pause on the federal government’s leasing program while the administration considers an overhaul, weighing the climate and public health risks of continued oil and gas development against the government’s legal obligations to energy companies. This review is the first step toward an outright ban on new drilling, one of Biden’s campaign promises.

The president aims to harness federal authority as never before to reduce planet-warming emissions. The orders amount to a sweeping repudiation of the Trump administration’s efforts to weaken environmental regulations and deny the seriousness of climate change. And they reflect how the new administration thinks about climate policy — as an existential crisis demanding an all-of-government approach.

“We’ve already waited too long to deal with this climate crisis,” Biden said at a White House signing ceremony. “We can’t wait any longer. We see it with our own eyes, we feel it, we know it in our bones. And it’s time to act.”

Even as opponents were claiming the initiatives would cost jobs, Biden emphasized that that a comprehensive climate effort would create clean-energy jobs nationwide.

The executive orders included directives to federal agencies to end fossil fuel subsidies, called for a task force to plan for reducing greenhouse gas emissions, and a declared climate change a national security priority for the first time. The president also directed his administration to protect 30% of federal land and coastal waters by 2030, a proposal that climate scientists and environmentalists have advocated for internationally to curb global warming and protect endangered species.

According to the U.S. Geological Survey, the extraction and consumption of oil, gas and coal from federal lands and waters accounts for nearly a quarter of the nation’s total carbon dioxide emissions.

Biden also called for the creation of a Civilian Climate Corps that will put Americans to work restoring forests, improving recreation on public lands and addressing the effects of climate change.

Other orders gave priority to the needs of people living in communities burdened by industrial pollution, elevating the issue of environmental justice, which is important to many young and minority voters. Biden will issue an order creating a White House interagency council on environmental justice, as well as offices within the departments of Justice and of Health and Human Services.

The president also signed a memorandum directing agencies to make decisions based on scientific evidence and data — a statement intended to distinguish Biden’s administration from President Trump’s, which was often criticized for ignoring or contradicting science in policymaking.

“This is the most ambitious climate platform put forward by an American president,” said Sam Ricketts, the founder of Evergreen Action, a group pushing for federal climate action. “It is mobilizing the entirety of federal government in an unprecedented way.”

Collectively, the moves are designed to signal that Biden intends to make curbing climate change a priority, even if Congress doesn’t. With a one-vote majority of Democrats controlling the Senate, the administration’s hopes of passing major climate legislation rest with a few moderates friendly to oil, gas and coal companies.

But the Interior Department has considerable authority over federal lands, which the administration can use to pressure fossil fuel companies and their investors, and encourage the development of renewable energy. Biden’s order on leasing will direct the department to create a plan to double energy production from offshore wind by 2030.

Such actions will test the limits of his authority to unilaterally confront climate change. The administration‘s initiatives follow up on the ambitious Clean Power Plan advanced during the Obama era, which the Supreme Court ultimately blocked.

Some of this week’s actions are certain to be challenged in court as well. The Denver-based oil and gas trade group Western Energy Alliance announced Wednesday that it already had filed a lawsuit to block the administration’s moratorium on leasing.

Heather Zichal, who served as deputy assistant for energy and climate change under President Obama, said that environmental regulators and policy advisors have become more savvy about crafting executive orders that will withstand legal challenge. Early in the Obama era, Zichal said, the emphasis was mostly on the unsuccessful effort to persuade a Democratic-controlled Congress to pass legislation.

However, as Trump relentlessly rolled back federal environmental protections, activists studied how a Democrat in the White House would be able to most effectively — and durably — use the executive branch’s powers.

“This is absolutely an unprecedented commitment to climate policy,” Zichal said of Biden’s plans. “They are not wasting any time.”

Environmental advocates hailed the actions as a corrective to Trump’s campaign to auction off as much public land as possible, including a last-minute rush to allow drilling in Alaska’s Arctic National Wildlife Refuge before he left office.

“This is an opportunity for the Biden administration to think about what an orderly and equitable transition away from fossil fuels on our lands and oceans will look like,” said Taylor McKinnon, senior public lands campaigner for the Center for Biological Diversity. “A rigorous climate review will show there’s simply no more room for new federal fossil leasing.”

Oil companies’ largest trade group, the American Petroleum Institute, criticized the move, saying it would lead to higher energy costs and a greater reliance on foreign oil imports. Ryan Flynn, head of the New Mexico Oil and Gas Assn., released a statement equating the order to “a blockade around New Mexico’s economy.”

“A moratorium all but guarantees that unemployment will rise, state revenue will fall, and our economy will come to halt,” he said.

But some energy companies, hammered by low oil and gas prices and pressured by investors, are moving away from fossil fuels and investing in renewable energy. Many are still sitting on leases they stockpiled during the Trump administration.

These companies may ultimately blunt the effect of the pause on leasing by continuing to extract oil and gas from existing leases. And because most of the tax revenue from fossil fuel development comes from royalties on oil produced, the moratorium’s effect on states like New Mexico and Wyoming could be less than critics predict.

“If what this pause does is say to the oil companies, ‘OK, you have thousands of permits you’re not using, let’s work on those,’ that’s still a lot,” said Nada Culver, vice president of public lands for the National Audubon Society.

It’s not clear how the moratorium will affect leases sold in the final weeks of the Trump administration. In California, oil companies bought rights to drill on federal land in Kern County at an auction in December. But some leases aren’t final, raising questions about whether the companies will be able to act on them.

The push to reduce greenhouse gas emissions and conserve federal land comes as climate change and its effects are accelerating. Sea ice is quickly melting worldwide and sea levels are rising. Record-breaking wildfires in the West and flooding in the Midwest are forcing people from their homes and communities. Last year essentially tied 2016 as the hottest year on record.

During an appearance on MSNBC this week, Senate Majority Leader Charles E. Schumer (D-N.Y.) said that Biden should consider declaring a national emergency because it would allow the president to act without Congress’ approval. Biden has so far resisted the idea, preferring to see whether Republicans are willing to work on bipartisan legislation.