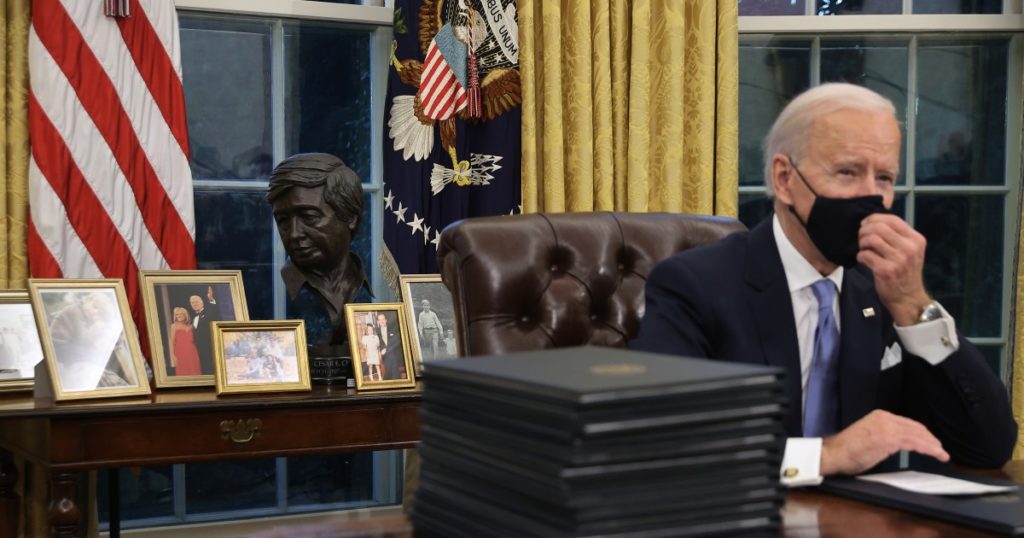 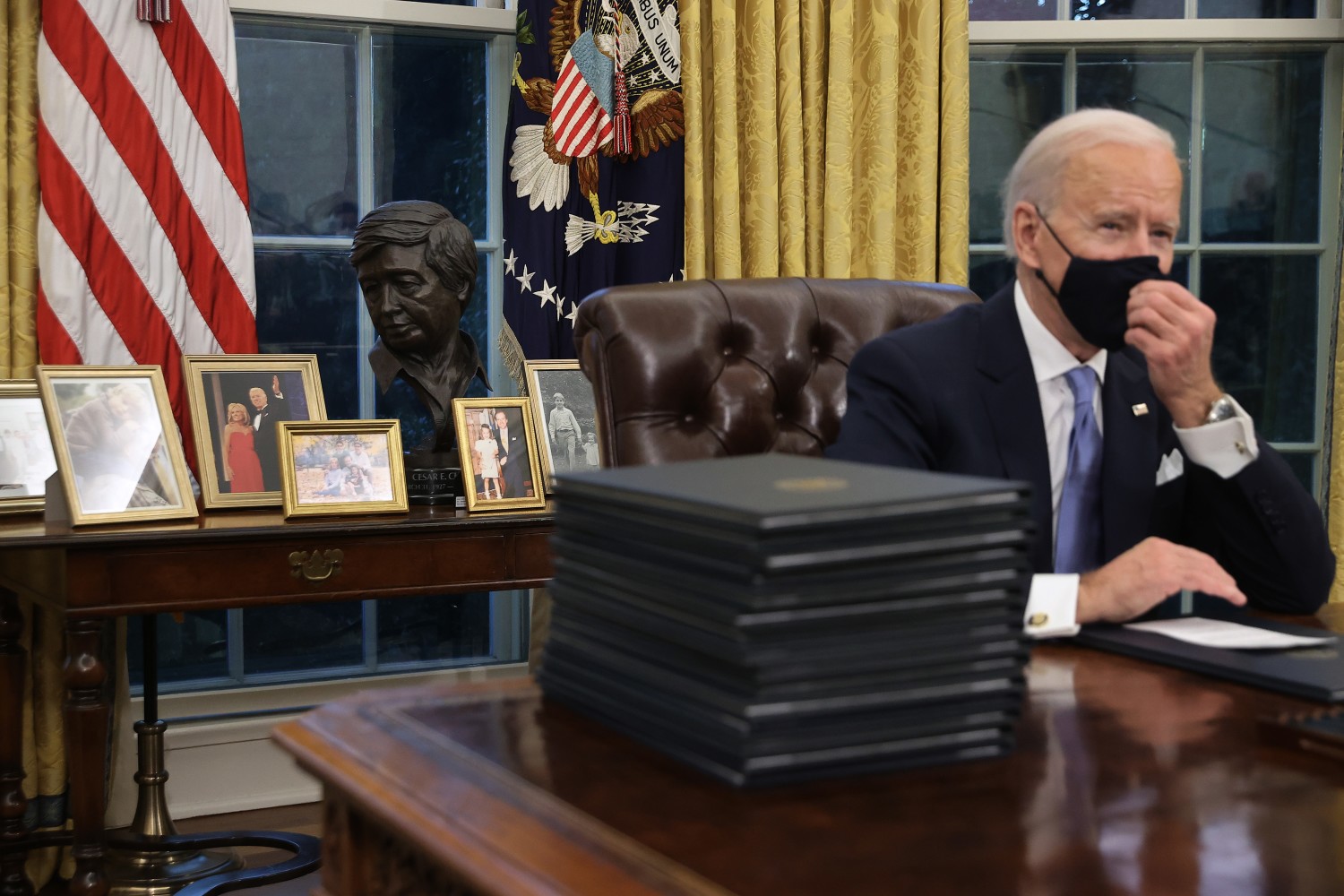 President Biden, the most avowedly pro-labor chief executive in decades, has wasted no time in courting unions, a critical Democratic Party constituency that has often felt neglected and taken advantage of in recent years.

Just hours after his inauguration, Biden took the unprecedented step of firing the sitting general counsel of the National Labor Relations Board, who had been blasted as anti-union.

His choice for secretary of Labor, Boston Mayor Marty Walsh, comes straight out of the labor movement. Biden’s pick for U.S. trade representative, Katherine Tai, was of one of two candidates endorsed by union leaders.

Among the flurry of executive orders that marked Biden’s earliest days in the White House were directives to ensure collective bargaining rights for federal employees and a $15 -an-hour minimum wage for them as well as the thousands of contract employees who make up a large share of the government workforce.

“The early signs are already significant and show an appetite for real change,” said Michael Wessel, a trade and labor specialist who served for many years on the staff of former House Democratic Leader Richard Gephardt.

Major labor leaders like Richard Trumka, president of the AFL-CIO, are more optimistic about the prospects for organized labor than they’ve been in many years.

“I know what he is. Joe Biden’s a blue-collar guy,” said Trumka, who like Biden is from a working-class area in Pennsylvania and has known the president for 40 years. “He understands working people, the importance of a paycheck, importance of health and safety on the job, importance of having a union .… He understands all of that. It’s not something he picked up in the polls. It’s what he believes.”

They say history may finally be on their side: Union leaders say the COVID-19 pandemic bolstered their cause by turning a harsh spotlight on income inequality and on how little leverage Americans have over their working lives.

“There’s a lot of organizing happening all across the country because workers understood that their employers were putting them in a situation of risking their lives and their families’ health and well-being,” said Mary Kay Henry, president of the Service Employees International Union. “We think there’s incredible momentum and that we’re at a tipping point.”

Even so, none of Biden’s early actions are likely to reverse the decades-long decline in union membership nationwide.

Any drastic change in those numbers in the near term would, at the least, require major legislation making it easier for workers to join unions. And prospects for that are dim, as are the chances for a $15 minimum wage for all American workers or a move to rein in the right-to-work laws that union organizers say hobble them in many states.

Not only are Democratic margins in Congress paper thin, but relatively conservative Democrats in both the House and the Senate are likely to shy away from such controversial measures.

Biden’s well-known respect for existing government institutions may steer him away from tradition-busting actions such as demanding an end to the Senate’s filibuster rule, which now effectively requires a supermajority to pass almost all legislation.

It wouldn’t take much for Biden to be more pro-labor than his recent predecessors, Republican or Democrat.

Under Presidents Carter and Clinton, both from the South where unionization has never been strong, labor power eroded rather than increased. Employers found more ways to combat organizing drives, and efforts to curb replacements for striking workers were repeatedly foiled. And in 1993, Congress passed the North American Free Trade Agreement despite strong opposition from unions.

President Obama’s focus on universal health insurance and other initiatives benefited workers broadly, but unions were largely an afterthought and there was little muscle behind major pro-union legislation.

President Trump capitalized on the disaffection of the working class, including some union members, vowing to rebalance trade and save coal and manufacturing jobs — promises he mostly failed to deliver.

Many union leaders think Biden will be different. His roots are in the industrial city of Scranton, Pa., and he has a history of identifying with and personally relating to workers.

At a campaign rally last October in Flint, Mich., a long-depressed auto manufacturing city, Biden extolled unions as the backbone of the middle class and noted that the first group that endorsed him when he ran for the Senate in the early 1970s was the United Autoworkers.

“It’s more in his DNA,” said Thea Lee, president of the liberal Economic Policy Institute. “I’ve seen him over the years at labor events, and he’s very comfortable.”

More concretely, Biden’s initiatives on green energy and plans for billions of infrastructure spending and manufacturing growth are in sync with labor goals for more jobs.

“You have more and more Democrats realizing that Trump was able to peel off a lot of blue-collar voters and that you have to do something to empower working people,” said Jon Shelton, a labor historian at the University of Wisconsin Green Bay.

Public approval for unions is at its highest in nearly two decades, surveys show. Calls for addressing income inequality and social and racial injustice have reached levels unseen for years.

And there are signs of organizing life in some seemingly unlikely places. Google engineers in California recently formed a union. Thousands of workers at an Amazon warehouse in Alabama will vote next month on whether to unionize, marking one of the biggest efforts in the South and at an online retail operation.

The pandemic has shown a particularly bright light on the vulnerability of millions of workers who have not been on the medical front lines but have been unable to work from home and avoid risks of infection.

Government officials at all levels quickly recognized the need to prioritize protection of doctors, nurses and others directly involved with COVID-19. Millions of relatively unskilled and lower-income workers who had to either leave home to work or lose their paychecks were largely left to fend for themselves.

Now, union officials say, workers such as janitors, grocery clerks, meatpacking workers and those in the vast gig economy are voicing complaints about safety, pay and working conditions.

Andrea Acevedo, who heads the SEIU healthcare union in Michigan, is hoping Biden can help weaken right-to-work laws that are in place in 28 states. They allow employees to benefit from a labor contracts without participating in or paying dues to a union.

Since Michigan became a right-to-work state in 2012 and officials changed rules on home-care workers, Acevedo’s union membership fell from 55,000 to a low of 10,000. It’s since clawed back to 14,000, in part thanks to union wins at nursing homes in the past year.

“I believe this administration wants to have the working class and union workers have a voice and say that has been silenced for the last four years,” she said.

Biden and Democratic Party leaders know they can’t ignore those voices. In fact, while they face real political obstacles in passing things like labor law reform and the $15 wage in Congress, they know they have to come through on working-class issues if they want to hold on to power in the 2022 congressional balloting and in the 2024 presidential race.

“They recognize they have a challenge with respect to working-class people, particularly men of all races and ethnicity,” said Lori Wallach, Public Citizen’s trade director. They need to show “that the Democrats are actually a party that’s good for working people.”