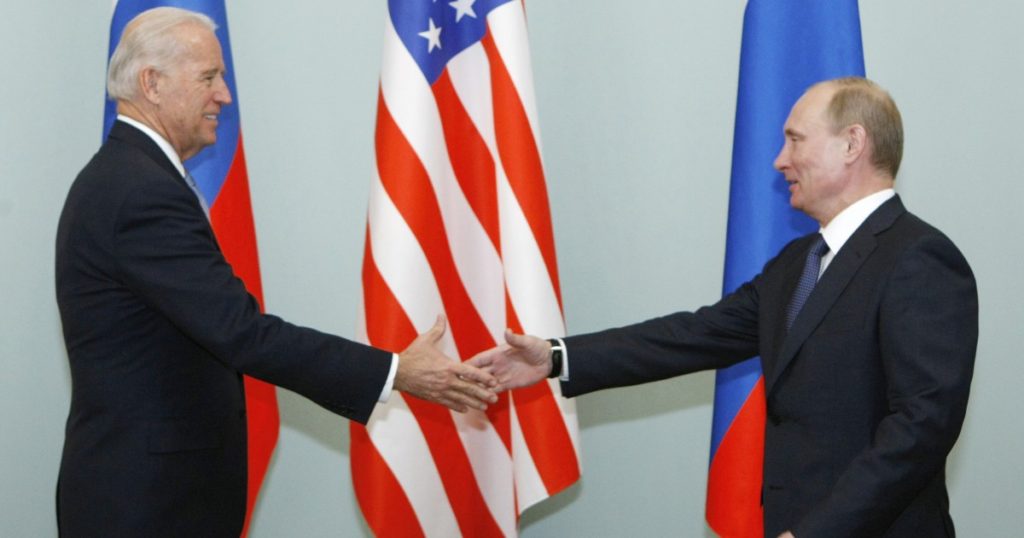 President Biden agrees with Russian President Vladimir Putin on at least one thing: Relations between their two nations are currently at a very low ebb.

Both said as much in interviews leading up to Wednesday’s meeting in Geneva, which comes amid tensions over myriad issues, including a spate of cyberattacks emanating from within Russia; Putin’s military adventurism along his country’s border with Ukraine; and his imprisonment of opposition leader Alexei Navalny, who survived poisoning with a Russian nerve agent.

Biden arrives at the summit fresh from enthusiastic meetings with allies welcoming the return of the United States to conventional multilateral diplomacy. He aims to use that support to present a united front to challenge Putin. At the same time, he acknowledged the difficulty in reversing Putin’s policies, which seem impervious to a litany of U.S. economic sanctions and the expulsions of diplomats.

“He’s Vladimir Putin. There’s no guarantee you can change a person’s behavior,” Biden told reporters Sunday in England, where he convened with the Group of 7 wealthiest democracies. “Autocrats have enormous power and they don’t have to answer to a public.”

The White House confirmed there will be no post-summit news conference, with Biden and Putin standing side by side. Administration officials are wary of elevating Putin to Biden’s level by affording him such a platform.

“This is not a contest about who can do better in front of a press conference or who can embarrass one another,” Biden said Sunday. “It’s about making myself very clear what the conditions are to get a better relationship.”

The lack of a formal news conference is also one way in which Biden’s interaction with Putin will contrast sharply with what occurred in Helsinki in July 2018. In a stunning moment in the annals of world summitry, then-President Trump stood by the former KGB officer and Russia’s longest-serving leader since Stalin and appeared to eagerly acquiesce to his claims. At one point, Trump said he accepted Putin’s denials over having interfered in U.S. elections despite U.S. intelligence evidence to the contrary.

Nor will Biden meet with Putin alone, as Trump did, conversing with Putin for two hours without aides or note-takers in the room. The two leaders aren’t likely to exchange gifts, as when Putin gave Trump a soccer ball. And, above all, this U.S. president will not publicly deny and excuse Russia’s interference in the 2016 U.S. presidential election.

One potential similarity to 2018: a lack of concrete results, actions or new policies.

“They just want to arrest the free fall so they’re not in this escalation cycle, while also conveying they’re being firm on everything from cyberattacks to incursions in Ukraine,” said Benjamin Rhodes, a former national security advisor to President Obama. “This is not the kind of summit where you have a bunch of announcements. It’s just to show that the bilateral relationship isn’t unraveling, and it’s not really guaranteed they’ll be able to show that.”

Putin, who uses his confrontation with the West as a way to distract his citizenry from a flagging economy and other domestic woes, is likely to test Biden’s patience as well as the president’s goal of having a predictable rival in Moscow, experts said.

“Putin is predictable only in his desire to keep the initiative in his confrontation with the West, so he is apt to strike at the first opportune moment,” Pavel K. Baez, a Russia specialist, said in an analysis for the Brookings Institution, a Washington-based think tank.

Biden, who affirmed in March his past characterizations of Putin being “a killer,” said again Sunday that his review of U.S. intelligence led him to conclude that Russia did in fact attempt to help Trump in 2016. And in recent weeks, amid a spate of cyber- and ransomware attacks on U.S. infrastructure from inside Russia, the president and top aides have put the onus on Putin to rein in the criminal groups behind them.

The Biden administration has already imposed economic sanctions on Russia for ongoing cyberattacks and the poisoning of Navalny.

“We’re not looking for conflict,” Biden said Sunday in England. “We are looking to resolve those actions which we think are inconsistent with international norms.”

Beyond delivering what he said would be a “very straightforward” message, Biden said he hopes to find areas in which the U.S. and Russia can work in tandem — potentially on arms control, the Middle East and climate change. Biden also intimated that Russia had “its own dilemmas,” pointing to its economy and COVID-19, as as well as in Syria and Libya.

Biden also said he was encouraged by Putin’s comments that Russia is prepared to extradite cybercriminals to the U.S. on a reciprocal basis. However, national security advisor Jake Sullivan later clarified that Biden was not advocating an exchange, but that he welcomed Russia’s willingness to extradite suspects to the U.S., while the U.S. would prosecute American suspects in its own system.

Putin’s comments came in an interview he did last week with NBC News in which he sang Trump’s praises but said he thought he could still work with Biden.

Characterizing Trump as “an extraordinary individual, talented individual” and “colorful” outsider, Putin said the 78-year-old successor is “radically different from Trump because President Biden is a career man. He has spent virtually his entire adulthood in politics.”

Putin dismissed Biden’s labeling him a killer as “Hollywood macho,” and he suggested there are “some advantages, some disadvantages” in working with a more predictable counterpart in Washington.

“There will not be any impulse-based movements on behalf of the sitting U.S. president,” he predicted.

Trump — still barred from social media over incitement of the deadly Jan. 6 Capitol riot after refusing to accept his election loss — has issued a number of statements since Biden embarked last week on his first overseas trip as president.

Trump touted a “great and productive” Helsinki meeting with Putin and lambasted the “Fake News” for its critical portrayal of his performance. And he re-affirmed what he said standing beside Putin: that he trusts the Russian leader’s denial of 2016 election interference over the U.S. intelligence officials who confirmed it.

“Good luck to Biden in dealing with President Putin,” he said in conclusion, “don’t fall asleep during the meeting and please give him my warmest regards.”