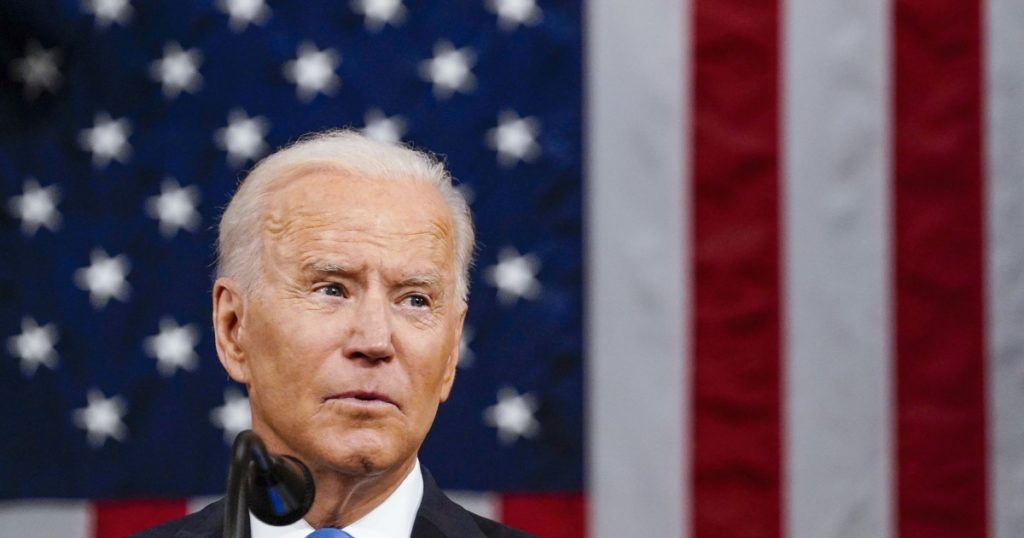 In a pitch for lifting American workers to prevail in global competition with China, President Biden on Wednesday used his first address to a joint session of Congress to press his case that massive spending on infrastructure, education, technological initiatives and social services will ensure the United States emerges from the coronavirus crisis in a stronger position than before.

The president rooted his proposals in working-class demands for steady paychecks, affordable child care and better schools. But he also framed them as part of a broader struggle between democracies and autocracies, saying the investments are needed to prevent Beijing from supplanting Washington in a position of international leadership.

The nationally televised, prime-time speech of just over an hour came as Biden approached the end of his first 100 days in office, a period dominated by his efforts to extend economic relief, expand vaccine distribution and bring an end to the pandemic. Although Biden cautioned that the threat isn’t over, he described the inoculation campaign as “one of the greatest logistical achievements our country has ever seen.”

With nearly one-third of Americans fully vaccinated, Biden has begun to pivot toward an increasingly ambitious agenda that, if successful, would make his presidency among the most transformative in generations.

“America is on the move again,” he said. “Turning peril into possibility, crisis into opportunity, setback into strength.”

Pandemic restrictions left the president speaking to a relatively sparse gathering of fewer than half the 535 members of Congress in the House chamber, rather than to the usual packed audience of lawmakers, Supreme Court justices, Cabinet officials, military leaders, diplomats and other guests.

Biden began by acknowledging the historic moment represented by the two women behind him on the dais — “Madam Vice President” Kamala Harris and “Madam Speaker” Nancy Pelosi (D-San Francisco) of the House. He was the first president, he noted, to be greeting women in both seats reserved for the two people next in the line of succession to the presidency. “And it’s about time,” he said to applause.

Lawmakers were spaced three or four seats apart, including in the gallery normally reserved for guests. During most years, a handful of members stake out the seats along the center aisle hours in advance to appear on television shaking the president’s hand as he enters. This year, no one was allowed inside until two hours before and each had a seat assigned by the speaker’s office. Only a few were in position to exchange fist bumps with Biden as he entered the chamber.

Metal fencing and National Guard troops ringed the Capitol, a reminder of the enhanced security that remains in place months after the Jan. 6 siege by supporters of then-President Trump. Biden described the riot in his speech as “the worst attack on our democracy since the Civil War.”

“The struggle is far from over,” he said. “The question of whether a democracy will long endure is both ancient and urgent.”

Although Biden did not mention Trump by name, he portrayed his predecessor’s tenure — and Trump’s desperate attempt to cling to power despite losing the election — as a dark moment in American history, saying, “We stared into the abyss of insurrection and autocracy.”

Biden’s speech was a landmark moment in a half-century political career, much of which was spent in pursuit of the office he now holds. Having spent nearly four decades as a senator and eight years as vice president, he joked that it was “good to be back” as he began his speech. Once he ended, he appeared reluctant to leave, glad-handing his way through the chamber as he slowly made his exit.

Biden used the speech to outline what he calls the “American Families Plan,” a just-released $1.8-trillion, 10-year proposal that would increase taxes on the wealthy to expand educational opportunities, provide paid family leave and offer tax credits to reduce the cost of child care. Low- and middle-income families would be eligible for two years of preschool and two years of community college at no cost.

To pay for the proposals, Biden wants to end the favorable tax rate on capital gains from stocks and other assets for people earning at least $1 million per year and to undo Trump’s reduction in the top income tax rate for wealthy Americans, restoring it to 39.6% from 37%.

The sweeping initiative comes on the heels of what the administration calls the “American Jobs Plan,” an array of proposals to repair roads and bridges, expand broadband internet access, replace lead pipes and invest in caregiving programs for the elderly. The total cost is more than $2.25 trillion over eight years, and it would be financed largely by increasing the corporate tax rate, partially reversing a deep cut made by Trump and a Republican-controlled Congress in 2017.

“I’m not out to punish anyone,” he said. “But I will not add to the tax burden of the middle class of this country. They’re already paying enough.”

Biden promoted several ambitious proposals to battle climate change, and he emphasized that efforts to reduce greenhouse gases would also generate economic opportunity. “For too long,” he said, “we have failed to use the most important word when it comes to meeting the climate crisis. Jobs. Jobs. Jobs” — and, he suggested, jobs that pay well enough “to raise a family” with money to spare.

He directed his remarks to people who “feel left behind and forgotten in an economy that’s rapidly changing,” and wonder whether new jobs “are for you.” He vowed that 90% of the jobs created by his proposals wouldn’t require a college degree.

Biden made a populist pitch as he described how the pandemic exacerbated the country’s economic inequality, noting that 20 million workers lost their jobs while billionaires saw their net worth increase collectively by more than $1 trillion. “Trickle-down economics has never worked,” he declared. “It’s time to grow the economy from the bottom up and middle out.”

Biden also looked back on the last few months with a valedictory for the advances during his first months in office against both the pandemic and unemployment.

The U.S. has vaccinated a greater percentage of its population than almost any other country. Nearly 43% of Americans have received at least one dose, and 29% are considered fully vaccinated, according to the Centers for Disease Control and Prevention.

Critics globally have complained that the United States is hoarding vaccines while underdeveloped nations are in need, but Biden said that the nation would become “an arsenal of vaccines for other countries” once all Americans have a chance to get their shots.

Sen. Tim Scott of South Carolina delivered Republicans’ official response, criticizing Biden for doing too little to get schools open amid the pandemic and giving Trump credit for the vaccine program underway.

While Biden “seems like a good man” offering “good words,” Scott said the president failed to make good on his campaign promise to heal the country’s divisions, suggesting that Democrats in Congress “want to go it alone” on policy and dismissing the president’s “so-called family plan” as government overreach.

“The actions of the president and his party are pulling us further and further apart,” Scott said.

Before the speech, House Democrats released their own array of proposals that go beyond Biden’s plan, such as making the enhanced child tax credit permanent. Biden’s proposal would extend the credit through 2025.

Enacting any of this legislation will probably require unanimous Democratic support because the party has slim majorities in the House and Senate, and Republicans are virtually united in opposition.

While congressional Republicans offered a scaled-down infrastructure package last week — an indication there may be room for a bipartisan compromise — it’s unlikely the White House will win bipartisan support for its sweeping investments in workers and families. That leaves Congress’ so-called reconciliation process, which allows the Senate to sidestep filibuster threats to pass budget-related proposals, as the Democrats’ best shot at making Biden’s latest plan a reality.

Biden wove into his address some personal appeals to bipartisanship. Urging members of Congress to work together to fund more research against cancer, Biden deviated from his prepared remarks to thank Senate Minority Leader Mitch McConnell (R-Ky.) for naming past legislation in honor of Biden’s son Beau, who died from a brain tumor. “It meant a lot,” Biden said, adding that “nothing is more bipartisan” than the fight against cancer.

He urged lawmakers to pass legislation to change policing practices that is named for George Floyd, whose murder by a former Minneapolis police officer ignited nationwide protests, by the first anniversary of his death May 25.

And saying, “I don’t want to become confrontational,” Biden implored Senate Republicans to join in supporting legislation against gun violence, in particular to strengthen background checks of weapons purchasers.