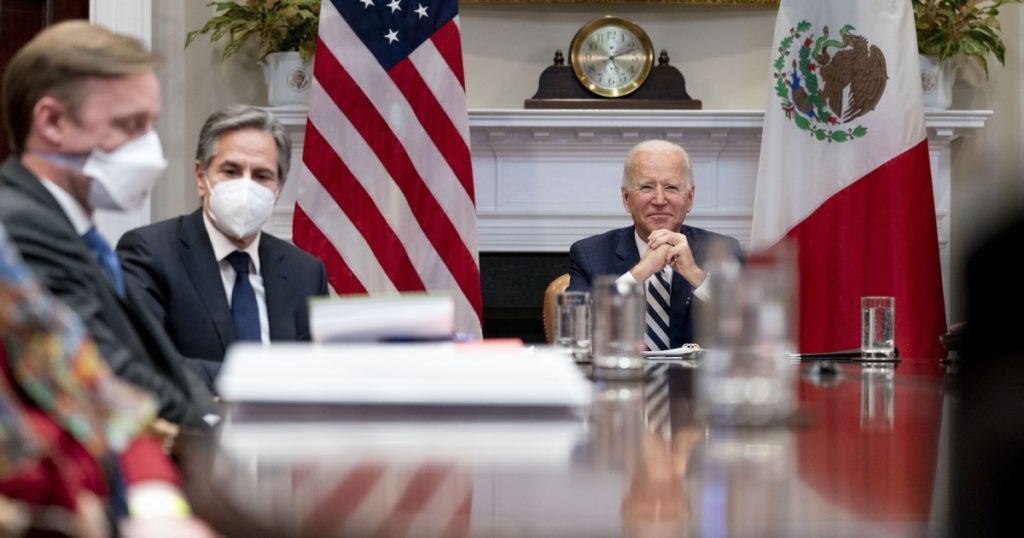 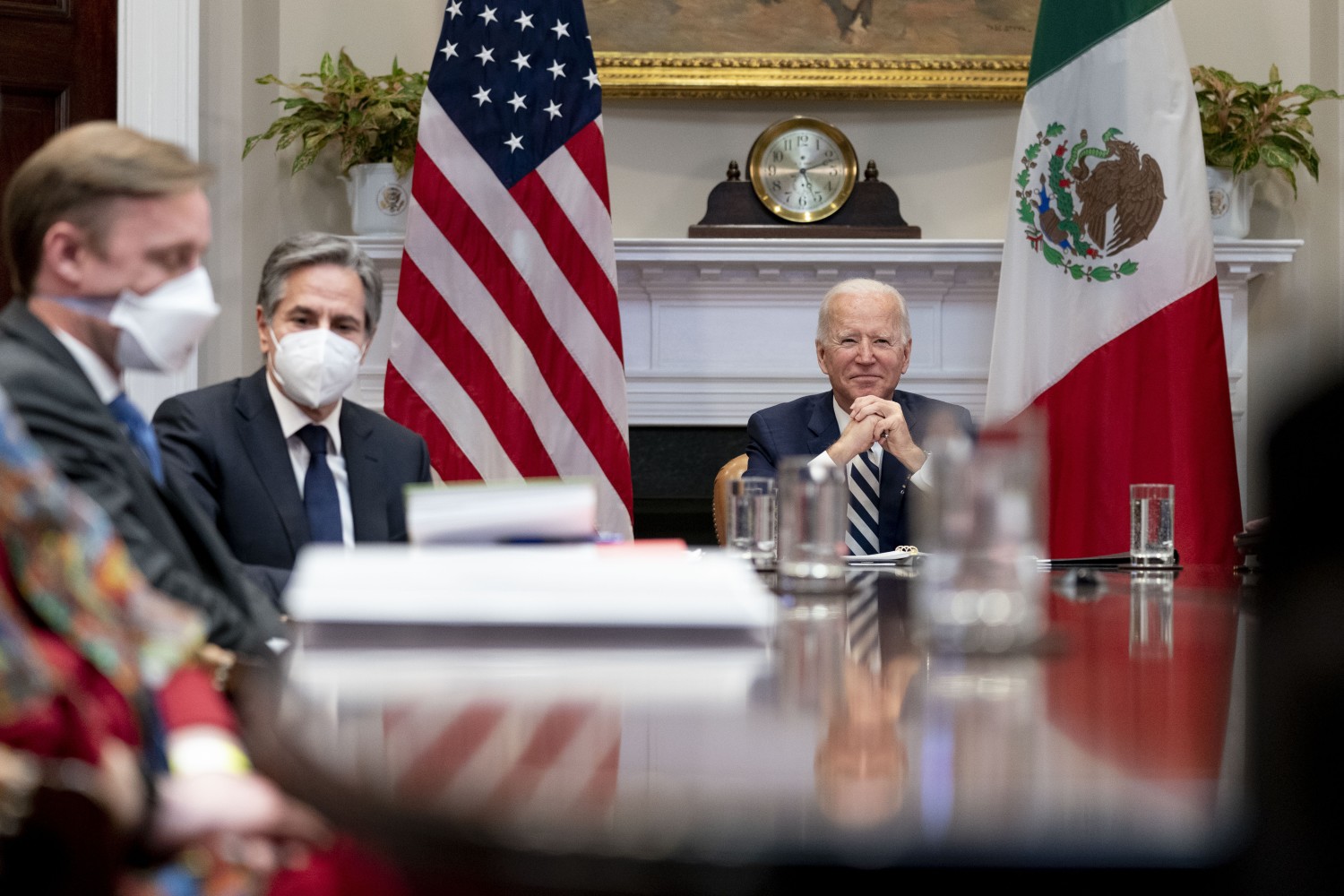 In their first meeting as heads of state, Presidents Biden and Andrés Manuel López Obrador of Mexico on Monday discussed expanding a visa program for Mexican workers as they sought to build a partnership to alleviate a persistent immigration crisis at their nations’ border.

The “virtual summit,” in which Biden and López Obrador spoke by videoconference, focused on immigration. It was Biden’s second meeting with a world leader since taking office, six days after his bilateral summit with Prime Minister Justin Trudeau of Canada.

Biden has followed traditional diplomacy of meeting first with the two countries that are the United States’ North American neighbors and its largest trading partners after China. Former President Trump, by contrast, controversially held his first foreign meeting with Saudi royalty, traveling to Riyadh.

As with many international relationships, Biden seeks a reset with Mexico from his predecessor’s approach. He began the meeting by telling López Obrador, “In the Obama-Biden administration, we made a commitment that we look at Mexico as an equal, not as somebody who is south of our border. You are equal. And what you do in Mexico and how you succeed impacts dramatically on what the rest of the hemisphere will look like.”

López Obrador said earlier that he would use his meeting with Biden to promote a plan similar to the “bracero” program of the 1940s and 1950s, a kind of guest-worker system that allowed millions of Mexicans to enter the U.S. legally to work in agriculture. Mexican farmworkers provide the bulk of the labor force picking fruits and vegetables and harvesting other crops in California and elsewhere.

“We are going to deal with this issue: You need Mexican and Central American workers,” López Obrador said over the weekend. “So let’s put order to the migration flow, making it legal to guarantee the workers that they don’t risk their lives and that their human rights are protected.”

A joint statement after the meeting did not directly address a bracero type of program. The presidents vaguely pledged to collaborate on “immigration policies that recognize the dignity of migrants and the imperative of orderly, safe and regular migration.”

A senior Biden administration official declined to say before the session whether the president would back or oppose the proposal, which could bring 600,000 to 800,000 Mexican and Central American immigrants a year to work legally on farms and orchards in the United States. The official said only that both countries agreed on the need to expand legal pathways for migration.

Unlike Trudeau, who did little to mask his relief at no longer dealing with Trump, López Obrador enjoyed a cordial relationship with the former president, despite the border tensions. Although Trump often drove foreign policy with Mexico via incendiary tweets that played to his nativist political base, López Obrador agreed to the restrictive U.S. immigration controls, primarily to avoid Trump’s threatened tariffs on Mexican exports.

It was a surprising about-face for López Obrador, a left-wing populist who once likened Trump to Adolf Hitler for his treatment of migrants. Although Mexico paid nothing for Trump’s partial border wall, despite Trump’s repeated claims that it would, López Obrador did send troops to his country’s southern border with Guatemala to obstruct a wave of asylum seekers bound for the United States.

Mexico held about 70,000 people seeking U.S. asylum while they waited for dates in immigration courts, a policy known as “Remain in Mexico.” Biden suspended the policy on his first day in office and later announced that 26,000 people could be released in the U.S. while their cases make their way through the system. So far, however, the administration has kept other aspects of Trump’s immigration apparatus in place.

During last year’s U.S. presidential campaign, Mexican officials worried that López Obrador’s acquiescence toward Trump could taint relations with a Biden administration. But Biden advisors dismissed the idea that the two men started on awkward footing.

“There is so much on the agenda that we are focused on,” a senior administration official told reporters ahead of Monday’s meeting, not “grudges.”

“This is the beginning of a marathon engagement,” the official said.

Enrique Quinta, a political analyst for the newspaper El Financiero in Mexico City, using the acronym by which the Mexican president is known, said, “The personal relationship that AMLO had with Trump will not exist. The chemistry between an establishment politician like Biden, and a Mexican president who considers himself disruptive, does not augur well.”

Before the meeting, the White House rejected a request from López Obrador that the United States share some of its coronavirus vaccine supply with Mexico. The joint statement said nothing about vaccines.

Hours before the meeting, Homeland Security Secretary Alejandro N. Mayorkas signaled that the Biden administration is considering whether to allow migrant families separated at the border during the Trump administration to remain in the U.S. permanently, although not necessarily as citizens.

“We will explore lawful pathways for them to remain in the United States and to address the family needs,” Mayorkas told reporters at the White House. “We are acting as restoratively as possible.”

Biden has not rolled back Trump’s March 2020 order that cited the public health crisis to expel anyone arriving at the U.S. border from Mexico, without giving them an opportunity to seek asylum.

As a result of that policy, border authorities have quickly expelled hundreds of thousands of migrants, including unaccompanied minors, pushing many into more remote, dangerous areas, from which they keep trying to enter the United States, agents say.

Biden has signaled that comprehensive immigration reform is a top priority. He is backing a bill to give legal status and a path to citizenship to the estimated 11 million people who are in the country illegally, many of whom have lived in the United States for years.

Biden also supports the Obama-era program Deferred Action for Childhood Arrivals, or DACA, which has allowed hundreds of thousands of people who came to the U.S. illegally as young children to remain in the country.