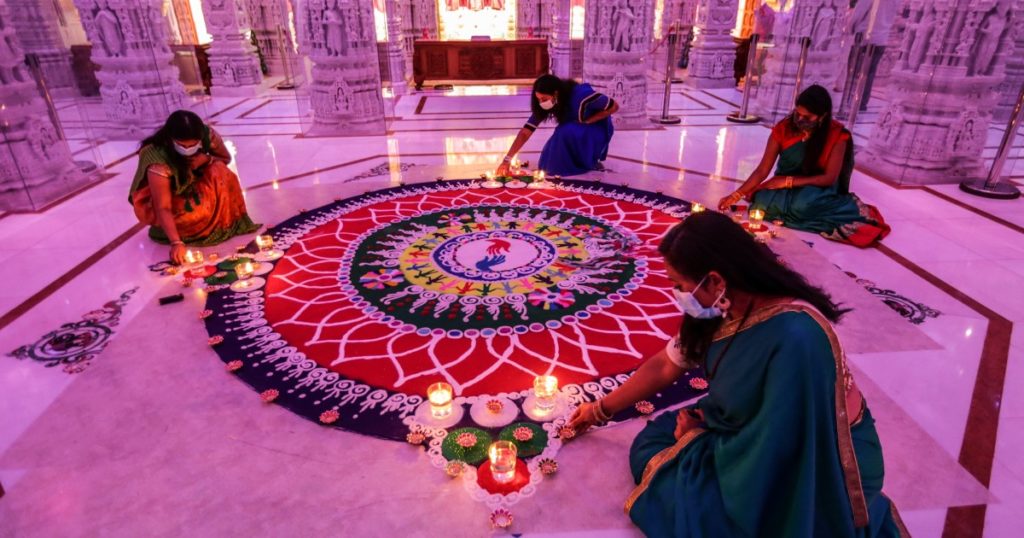 When CNN informed Aarathi Venkatesan that Joe Biden and Kamala Harris would be the next inhabitants of the White House, her first words were a Hindu prayer.

“Let good things occur to the king of the country, who looks after his people well, in the path of justice,” she recited, words from a well-worn Vedic blessing that includes the safety and success of those in charge.

With the start Saturday of the Indian holiday of Diwali, the festival of lights celebrated by a billion people worldwide and marking the start of a new year, Venkatesan said her family will be “wishing the [Biden] administration well, praying for [Harris’] success.”

In California’s Indian American community, supporters of the Democratic presidential ticket see special meaning this year in a holiday that celebrates the triumph of good over evil, light over darkness and the defeat of ignorance through knowledge — themes used by both sides in the recent election. But with the win of the Biden-Harris team, some supporters feel a sense of victory made more poignant by the festival.

“This Diwali does feel a little bit more meaningful, especially when we have some hope,” said Mallika Chopra, a Los Angeles author and daughter of Deepak Chopra. “It feels like lightness is coming.”

“There is no doubt that as we start Diwali, I see the parallel of light starting to shine in,” said state Assemblyman Ash Kalra (D-San Jose). “It’s hard to ignore.”

Tustin naturopath Angie Mehta, a Marine reservist, will “definitely be praying for all our newly elected leaders [and] our leaders currently to really maintain righteousness, happiness and freedom.”

Though traditions vary across India, the main stories at the center of the days-long festival feature heroes defeating demons, restoring balance to a troubled world.

Some honor the day as a celebration of Lord Krishna’s victory in battle against the demon Narakasura, ending his unjust reign and ushering in peace on Earth. Others honor it as the return of King Rama and his wife, Sita, after 14 years of exile in a forest, culminating when Rama killed the demon Ravana.

Lakshmi, the goddess of fortune both material and spiritual, is honored with elaborate prayers and offerings, as is her adopted son, the elephant-headed Ganesh, god of good beginnings and destroyer of obstacles. Sikhs, Jains and some Buddhists also celebrate.

On Friday, at the BAPS Swaminarayan Mandir, a large Hindu temple in Chino Hills, volunteers tended works of sand art called rangolis, signifying “unity and selfless service,” while others prayed.

“What’s interesting is the way in which these myths have become a way of talking about the last four years in the United States,” said Archana Venkatesan, chair of the UC Davis Department of Religious Studies and Aarathi’s sister. “I have heard it from so many people.”

For many, Harris is more meaningful than her running mate. Her roots in the south Indian city of Chennai and her experience as the daughter of immigrants resonates with many Indian Americans, themselves often here for only a generation or two. Others are drawn to the glass ceiling she broke for both women and people of color. Some are sending good energy, knowing that, like all those who travel first on paths, her achievements and failures will be scrutinized.

“We are proud of her, and I think in our annual Diwali celebration, as we pray for world peace and just prosperity for the year, having her in this his huge role, especially representing females, that is amazing,” said Hetal Patel, a Pasadena chiropractor. “So we wish her well so she can serve to her best ability.”

Indian girls are some of her biggest fans, and they can’t get enough of seeing their reflection in her, or an image of what they hope to be. They love her Sanskrit name, which means “lotus” and has ties to Lakshmi; her newfound ability to make dosas; her dancing in the rain. This year, as they don the colorful saris, midriff-baring cholis and other new clothes that are purchased as holiday tradition, there’s a fresh pride and gratefulness for an increased sense of belonging.

Others see something even more in the vice president-elect. In October, during a different religious holiday, a meme of Harris circulated on WhatsApp depicting her as the warrior-goddess Durga, riding a lion with Biden’s face and slaying a demon with Trump’s image. The picture was tweeted by Harris’ niece Meena Harris, sparking backlash from some in the Indian community who were offended by the use of religious imagery in politics.

But the backlash received its own backlash.

Academics and others quickly pointed out that India has a long tradition of depicting political leaders in religious terms, especially women. India’s only female prime minister, Indira Gandhi, was the subject of similar iconography, as was her daughter-in-law Sonia Gandhi and other female politicians at lesser levels.

“All of these very prominent politicians have constantly been imaged this way,” said Archana Venkatesan, the professor. “It’s just sort of ubiquitous.”

Biden has his own goodwill in the Indian community, though he has not received deifying treatment. Former President Obama was the first to host an official Diwali reception in the White House in 2009, and in 2016, as Obama’s vice president, Biden threw a Diwali party at his official residence at Number One Observatory Circle, on the grounds of the U.S. Naval Observatory in Washington. It was an unexpected gesture that was welcomed by the Indian community.

“I was like what, really? Is this a real call?” said M.R. Rangaswami, founder of Indiaspora, an organization dedicated to the advancement of South Asians, remembering when Biden staffers asked him to co-host the reception. “That was fun. That was really good.”

Trump is not without his own well-wishers in the Indian community. While one preelection poll found about 65% of South Asians were planning to vote for Biden, 28% were firmly in the Trump camp.

Trump has hosted multiple Diwali parties at the White House during his tenure, and he is well received by some South Asians for appointing Indian Americans to high-level positions, including Nikki Haley as ambassador to the United Nations, and taking a harder line than his predecessor on Pakistan, a country with fraught relations to India.

But he’s also drawn fire for mimicking the accent of Indian Prime Minister Narendra Modi and gaffes including a 2018 Diwali tweet that honored the festival as one “observed by Buddhists, Sikhs, and Jains,” while forgetting to mention Hindus.

With the pandemic once again threatening to overwhelm medical systems, the large and rambunctious celebrations that usually mark Diwali are largely gone. Fireworks in the early dawn have been replaced with quieter pujas, the prayers offered to gods. Large family gatherings with more food than Thanksgiving have turned to intimate meals with Zoomed-in friends.

But the small lights, diyas, that every household puts in windows and doors to welcome Lakshmi will be present, along with a hope that having Harris in the White House could mean a blowout Diwali next year.

“I think it will take it to the next step,” Rangaswami said. “Once COVID subsides, look for something big in November 2021 in D.C., absolutely.”