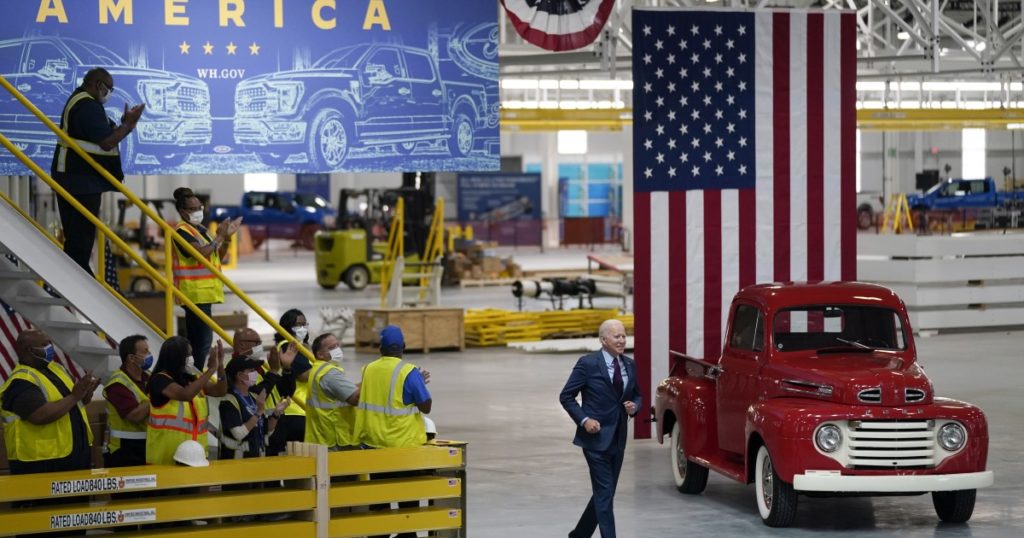 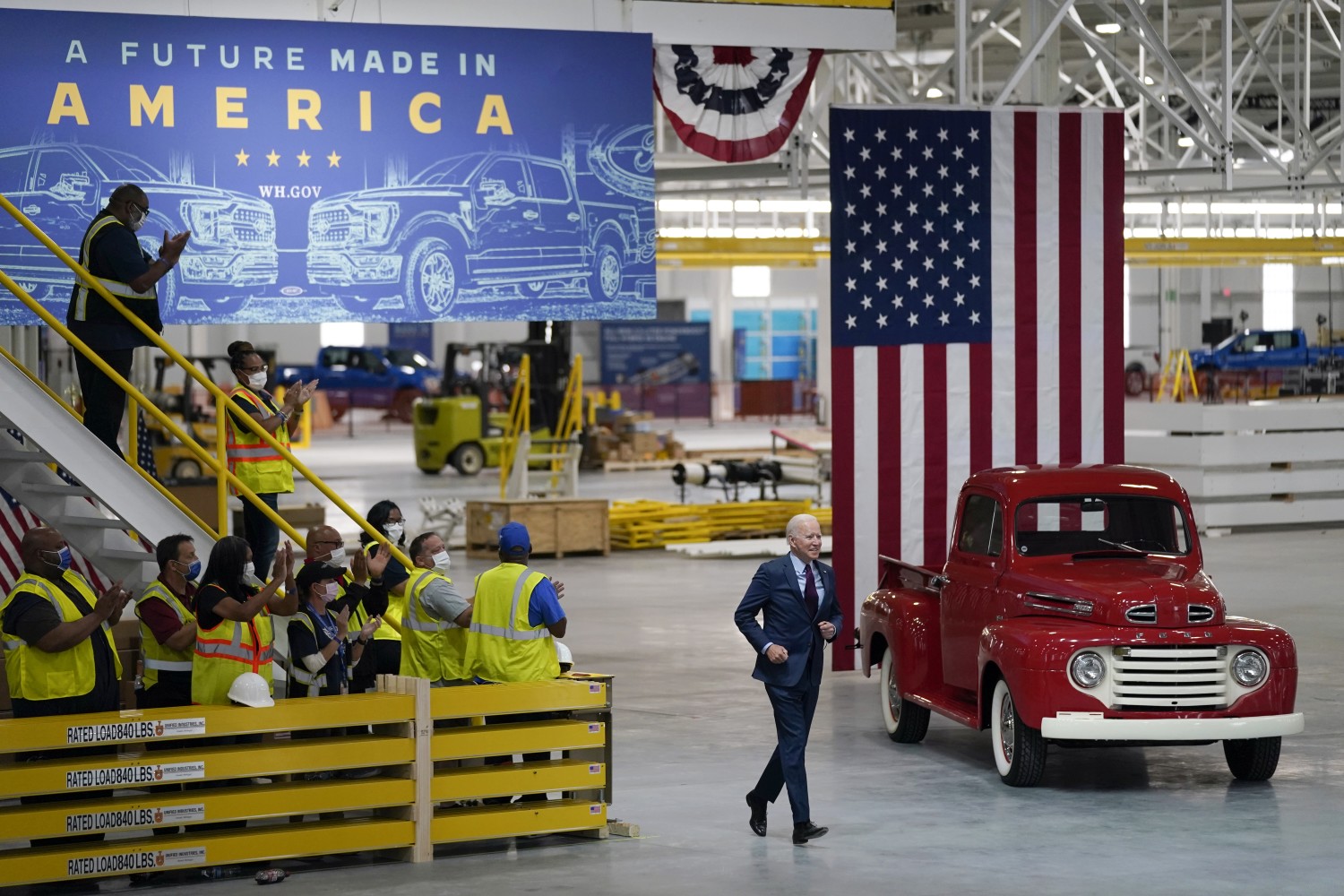 As Joe Biden launched his presidential run, he made an early stop at the Washington headquarters of the AFL-CIO to meet with its president, Richard Trumka.

The former vice president talked about economic inequality and sluggish wages, analyzing them as a product of the outsize power corporations have over workers, Trumka said.

In other words, he said, Biden talked like a union guy.

Two years later, that memory spotlights the contrast Trumka and many other union leaders see between Biden and former President Obama, whose administration often left them frustrated.

“Obama and [Bill] Clinton both surrounded themselves with a lot of Wall Street people who had no clue,” Trumka said in an interview. “We were an annoyance to be dealt with.”

Biden has put unions at the center of policy — viewing them as vehicles not only to rebuild middle-class jobs but also to address climate change and racial and gender inequity.

“Our administration will probably prove to be one of the most pro-union administrations that we’ve had, and I say that with pride,” Vice President Kamala Harris said in an interview. One of Harris’ assignments is to lead a high-level administration task force on worker empowerment.

“It’s really basic,” she said. “Almost mathematically, if you are requiring the one employee to bargain against a corporation, the outcome will not be fair, because there’s such an imbalance of power.”

The vice president’s statement and the task force — which will examine how every aspect of the federal government can support union organizing — go far beyond what the last three Democratic administrations said or did.

Biden’s administration may be the most overtly pro-union since Harry Truman left the Oval Office nearly 70 years ago, labor leaders and outside analysts say.

It’s a measure of just how formidable the hurdles are for unions in the U.S. that even with such support from the White House, many of organized labor’s top priorities face long odds:

An effort this year to organize warehouse workers at an Amazon facility in Alabama failed badly, despite a video Biden recorded supporting efforts to beat back what he called “anti-union propaganda.” The AFL-CIO’s top legislative goal — a long-stalled rewrite of federal labor law to make organizing easier — remains stuck in the 50-50 Senate. And an increase in the $7.25 federal minimum wage to $15 — the first hike since 2009 — suffered an early defeat in the Senate during the debate over Biden’s $1.9-trillion COVID-19 relief bill.

Although polls show unions with a more positive image now than at any point in nearly two decades, the share of the workforce that belongs to a union has continued to plummet. Unionized workers make up only about 1 in 10 employees and only 1 in 20 private-sector employees.

Reversing that trend forms a key part of the Biden administration’s answer to a question that has vexed policymakers: Why have wages for average Americans stagnated for most of the last 30 years, while corporate profits and wealth at the top have swelled?

Clinton and Obama tended to put the onus on impersonal forces such as technological change. Clinton, in particular, argued that the U.S. had to invest more in education to upgrade workers’ skills.

During the Clinton administration, even Biden — then a senator — supported the North American Free Trade Agreement in a 1993 vote, which most unions strongly opposed.

Neither the Clinton nor Obama administrations saw unions as a major part of solving the problem.

“You often got the sense that they almost seemed embarrassed to express any outward support of unions,” said Jake Rosenfeld, a sociology professor at Washington University in St. Louis who chronicled the diminishing clout of organized labor in his book “What Unions No Longer Do.”

The president talks about the “dignity” and “respect” that come with a union job.

Labor Secretary Marty Walsh, who spent a career as a labor leader in Boston before becoming the city’s mayor, said wages were paramount, but in an interview he also reeled off a list of benefits, including family leave and widely available pensions, that workers in countries with stronger labor movements had achieved.

“Many other workers around the world and European countries have a lot of these things that we don’t have in America,” he said.

Biden and his advisors not only reject the Republican diagnoses on stagnant wages but also see previous Democratic answers as insufficient. In their eyes, pay issues have everything to do with a decades-long campaign by corporations to reduce workers’ bargaining leverage.

“Without greater bargaining power, the benefits of overall economic growth simply aren’t going to reach the middle and working class,” said Jared Bernstein, Biden’s longtime economic counselor who is now a member of the White House Council of Economic Advisors.

“That has caused a lot of people who weren’t really sure how they felt about unions to understand that the only way to address those issues, systematically and for the long term, is through worker organizing and power,” said Harris, who served as a top Labor Department official in the Obama administration.

The rapidly expanding renewable-energy industry has emerged as a key test for Biden’s pro-union ambitions.

As the U.S. economy transitions from fossil fuels to renewable energy, the stakes for the labor movement could hardly be higher: Will the new energy industry develop as a unionized, high-wage sector, the way automobile manufacturing was in an earlier era, or as a low-wage, mostly non-union industry, the way online retail has developed in recent years?

As part of his infrastructure plan, Biden has proposed funneling hundreds of billions of dollars into jump-starting green energy. The administration has put far-reaching pro-labor provisions into its proposed legislation to try to shape its development.

“Whether it’s energy areas, green jobs, whether it’s electric grids, whether it’s power lines … we want to use that bill to make sure that people come out of it and can have an opportunity to get into the middle class,” Walsh said.

Republicans and business groups oppose those labor provisions, as well as changes the administration is making unilaterally to favor union shops in winning large government contracts.

“It doesn’t help American workers to punish their employer if the employees have decided that they don’t want to form a union,” said Neil Bradley, executive vice president and chief policy officer at the U.S. Chamber of Commerce.

Though Republicans have not made a major issue so far of Biden’s support for unions, they have consistently attacked him for being more liberal than he appeared in his campaign.

The administration’s pro-union stand could emerge more prominently in those attacks in coming months, some strategists think. An early taste of what that might look like came this spring when Republican spokespeople sought to tie Biden to the slow pace of school reopenings, especially in major cities. The administration put teachers unions ahead of the needs of students, they said.

Beyond the politics, some outside economists warn that Biden’s insistence on tough labor standards will push up the cost of renewable energy, slowing the effort to replace fossil fuels.

“If you make installing solar panels the most expensive thing in the American economy, it’s going to be harder to hit your green-energy goals,” said Douglas Holtz-Eakin, the former director of the Congressional Budget Office and an economics advisor for Sen. John McCain’s 2008 presidential campaign.

Union officials are nervously waiting to see if Biden will jettison some of their goals to reach a deal, but Biden advisors reject the argument that green energy and labor rights are in tension.

“It’s a false choice,” said Seth Harris, the labor issues coordinator. “We don’t have to choose green versus jobs.” Getting unions and environmental groups “moving in the same direction,” however, sometimes requires “very blunt conversations,” he added.

Administration officials echo labor leaders in saying that the transition to green energy will be politically sustainable only if workers see jobs in the new economy delivering wages and benefits comparable with those in older, unionized sectors.

Vice President Harris said labor activists made the case to her years ago that solar panels and wind turbines needed welders and pipe fitters, just like older industrial jobs, once the “fancy new names” are stripped away.

In addition to the battles over the future of green energy, the White House is supporting bills to help workers organize and has made aggressively pro-labor personnel moves.

Biden also moved early to reverse a pending Trump administration rule that would have made it easier for companies in the gig economy and the construction industry to classify their workers as independent contractors.

All those steps reflect Biden’s belief in the central role that unions play in ensuring a prosperous middle class, said Bernstein, the economic counselor. It’s a position more of the party has come to accept.

“I have been talking to Democrats about unions for a long time,” he said. “Some of them are always in the Biden camp, and some of them aren’t. I have found those conversations to be more welcoming in recent years.”