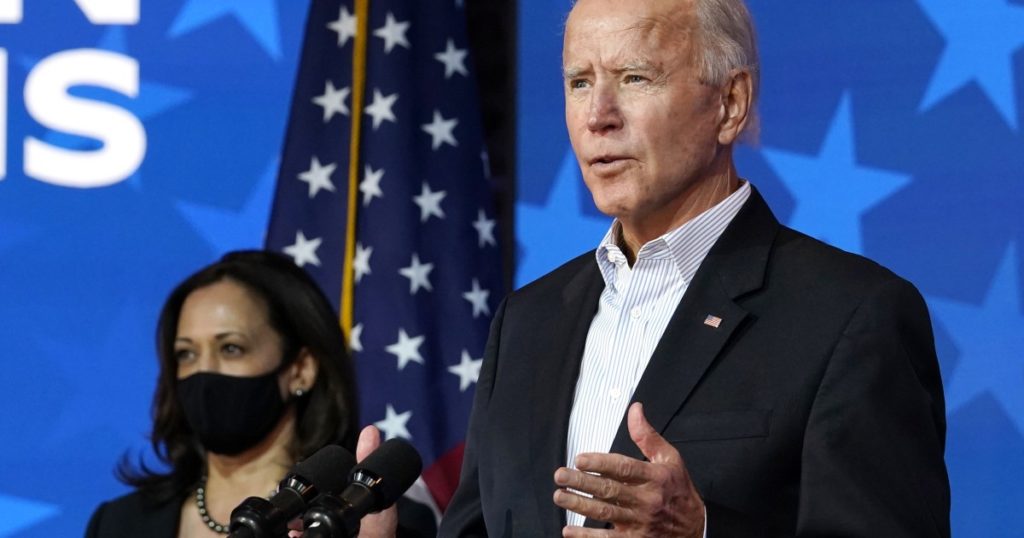 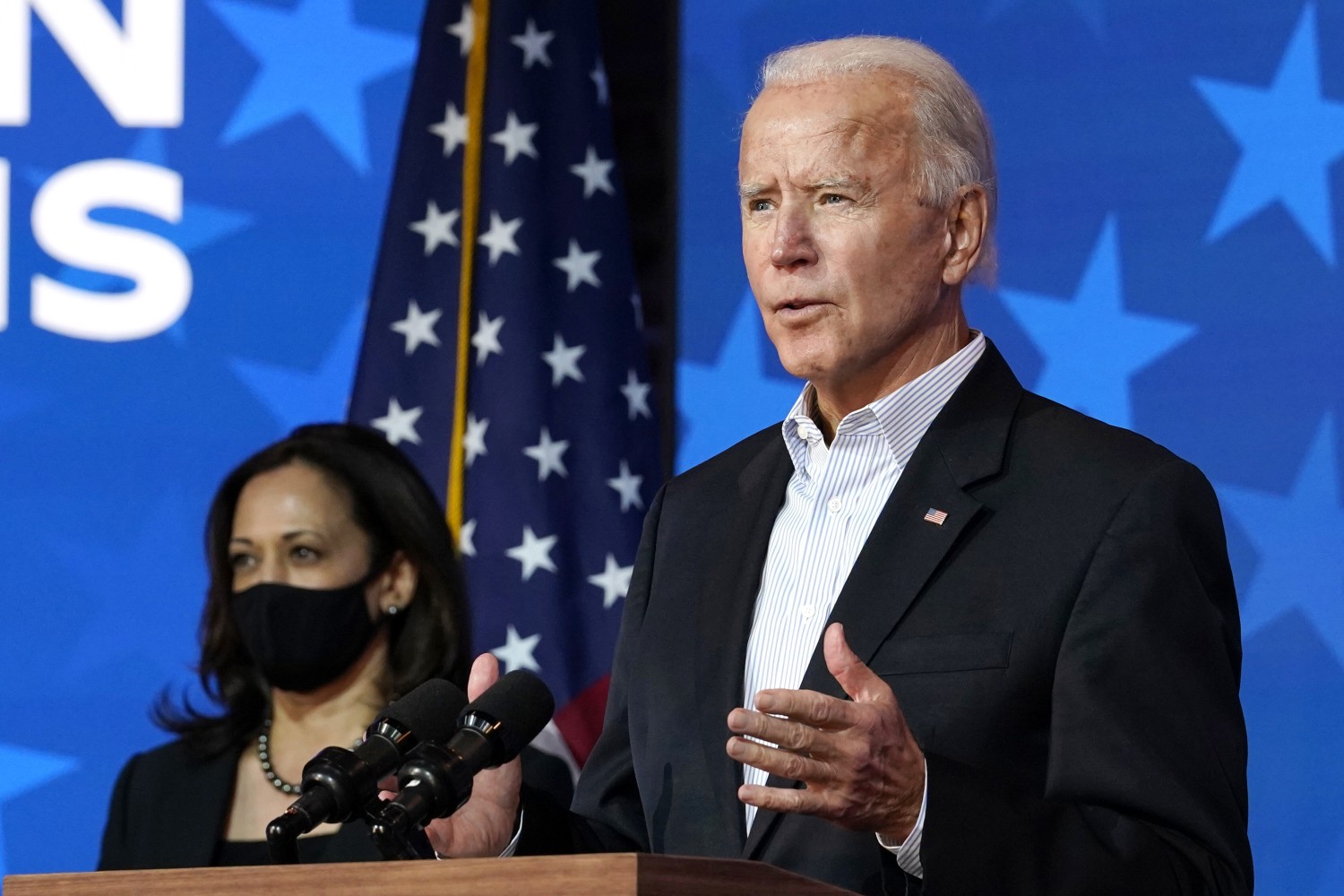 In a major victory for Democrats, Joe Biden narrowly defeated President Trump in the Southern battleground state of Georgia, becoming the first Democratic presidential candidate to secure this traditionally conservative stronghold since 1992.

Major TV networks declared Biden the winner Friday in Georgia and President Trump the winner in North Carolina, the last two states to be settled a week and a half after election day. That gives Biden a 306-232 victory over Trump in the electoral college, more than enough to claim the 270 electoral votes it takes to win the White House.

With just 14,000 votes separating Biden and Trump in Georgia, election officials began the laborious process of a statewide audit Friday, hand-counting nearly 5 million ballots, after Trump and his supporters made unsubstantiated claims of election fraud. State officials say the audit is unlikely to change the outcome.

“This proves what we’ve been saying all along … that we have the voters here to flip the state blue,” said Nikema Williams, the chair of the Georgia Democratic Party, who was just elected to fill the late Rep. John Lewis’ seat. “It is a matter of making sure that we have the resources and candidates willing to work to get out the vote.”

The result capped a decade of Democratic efforts to capitalize on changes in Georgia over the last decade, as the state’s population has surged from 9.6 million to 10.6 million. A growing number of Asian and Latino people have moved to the state, Black residents have migrated from Northern cities, and more college-educated white people have flocked to Atlanta and its suburbs.

“This is not your father’s or grandfather’s Georgia,” said Charles Bullock, professor of political science at the University of Georgia. “It is a different Georgia, a different population.”

In the 2012 presidential election, Republican nominee Mitt Romney won Georgia by 8 percentage points. In 2016, Trump won by 5. Two years later, then-Secretary of State Brian Kemp, the Republican candidate, won the governorship over Democrat Stacey Abrams by just 1.4 percentage points — amid allegations that he and the GOP had worked to suppress minority votes by purging voter rolls.

“Georgia has become more competitive, so this is not all of a sudden,” said Andra Gillespie, an associate professor of political science at Emory University in Atlanta. “Democratic activists have been pining for this moment for years. It was a matter of when and not if.”

The win was not just demographic destiny. Many credit Abrams, who went on to set up Fair Fight Action, a national voting rights organization, with playing a pivotal role in amplifying grass-roots work to expand the electorate and register hundreds of thousands of voters. Since 2016, Georgia has added more than 1 million voters to its voter rolls.

“Stacey Abrams was able to move us to scale by making sure we have the resources to actually do the work on the ground and showing us what was possible with our votes when she was top of the ticket,” Williams said. “But as she will also tell you herself: It was never about just her one person or one election cycle. This is about building a multiracial coalition.”

Trump, who has raised a barrage of unsubstantiated claims of election fraud since Nov. 3, appeared to be in denial Monday about Biden’s lead.

“Georgia will be a big presidential win, as it was the night of the Election!” he tweeted as Biden led the tally by about 11,000 votes.

Republicans recognized that Georgia would be tight. In his 2020 campaign, Trump visited the state four times since July, an indication that he had not been able to nail down the support he needed.

On the Sunday before election day, in a sign of his campaign’s mounting jitters about the state, Trump touched down in the northwestern town of Rome, amping up a crowd of thousands of loyalists with a promise of a “great red wave.”

“I think we’re going to do better than we did four years ago,” he said.

But Democrats saw promise in Georgia too. A week before election day, Biden paid a visit to the tiny rural town of Warm Springs, where President Franklin D. Roosevelt found relief from his polio symptoms.

Biden gave a speech promising national healing, then attended a get-out-the-vote rally in Atlanta. In the days before Nov. 3, his running mate, California Sen. Kamala Harris, visited the Atlanta suburbs that Sunday, as did former President Obama on Monday.

Voters responded with unprecedented turnout. More than 4 million Georgians voted early, and the total surpassed 4.9 million, a state record in a presidential election.

Democrats scored victories up and down the ballot. Two Republican U.S. senators were forced into runoffs that offer Democrats a slim chance of a majority in the Senate. (Republicans have won every statewide runoff in Georgia history.) Democrat Carolyn Bourdeaux won the 7th Congressional District. Three suburban counties elected their first Black sheriffs.

Much of the Democratic growth in the state spread out from the sprawling metropolis of Atlanta. Democrats continued to make inroads in the rapidly developing suburban areas north of the city — traditional Republican strongholds such as Gwinnett and Cobb counties. But the most significant gains came in counties farther south, such as Henry, Douglas and Rockdale.

Their biggest increase from 2016 — nearly 9 percentage points — came in Henry County, a once sleepy rural, predominantly white stretch of the state that in recent decades has seen an influx of minorities and a solidification of Black political power. In 2016, Hillary Clinton eked out a win there with just 51% of the vote; Biden won it by nearly 60%.

“I expected it to be much closer,” said Emanuel Jones, the Black Democratic state senator whose district includes Henry County, noting Clinton’s narrow margin in 2016. “We were praying that we got to 54%.”

On the surface, Democrats didn’t appear to be making much progress in reinvigorating the base, Jones said, as the pandemic stopped them from knocking on doors. But a lot of the work was going on behind the scenes, he said, with Black churches moving their platform online, organizing grass-roots Zoom meetings that allowed them to connect church to church.

“That enabled us to virtually knock on so many more doors,” he said.

Democrats expanded their margins not only in blue-leaning communities. They also diminished GOP leads in farther-flung exurbs such as Forsyth, Fayette, Cherokee and Paulding counties and even picked up a few percentage points in some deeply red rural communities.

Still, Republicans continue to hold the reins of power in Georgia, controlling the governor’s office as well as strong majorities in both the state House and Senate. Last week, they managed to oust House Minority Leader Robert Trammell, the state’s last rural white Democratic legislator.

As national attention has now swiveled to Georgia’s Senate runoffs — with Jon Ossoff facing Sen. David Perdue and the Rev. Raphael Warnock taking on Sen. Kelly Loeffler on Jan. 5 — the question is how competitive Democrats will be in an election without Trump’s name on the ballot.

“Fear is always a greater motivator than opportunity,” said Chip Lake, a Republican strategist. “Look, for Republicans right now, it certainly looks like there’s a high degree of likelihood that Joe Biden will be the next president. … With Nancy Pelosi in charge of the House, with Joe Biden and Kamala Harris running the executive branch of government, the thought of Chuck Schumer being the [Senate] majority leader is a big motivator to get people out and vote.”

Some Democrats say the party has to go beyond focusing on turning out the base and strategize on how to reach out to a broader swath of voters.

Michael Thurmond, the chief executive of DeKalb County, a predominantly Black county that voted 83% for Biden, said Biden’s campaign made headway in Georgia because it decided not just to energize the traditional Black Democratic base but aggressively solicit support from moderate whites and disaffected Trump voters.

Now that Biden has won, Thurmond said he hoped to see his party solidify a strategy of rebuilding a more traditional Democratic coalition of Black and white voters.

“We have to be more forceful in speaking to working-class voters — white and Black or any race, for that matter,” he said. “And we have to really focus our attention on addressing not just the health side, but also the economic debacle that’s unfolding in our nation, particularly for working-class people, white and black. People are really hurting now.”

Williams said she was not worried about Democrats’ chances of winning a statewide election that did not have Trump’s name on the ballot. The base, she said, was amped up and ready to mobilize.

“This is a turnout race,” she said. “It’s time for a change. … And just because something has always been done one way doesn’t mean it will always be done that way. We’re changing norms here in Georgia.”