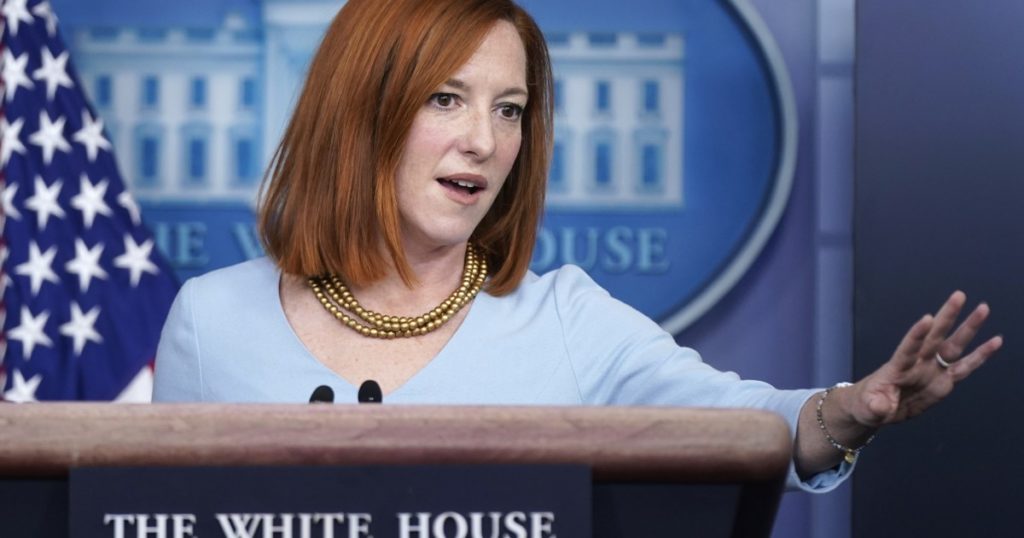 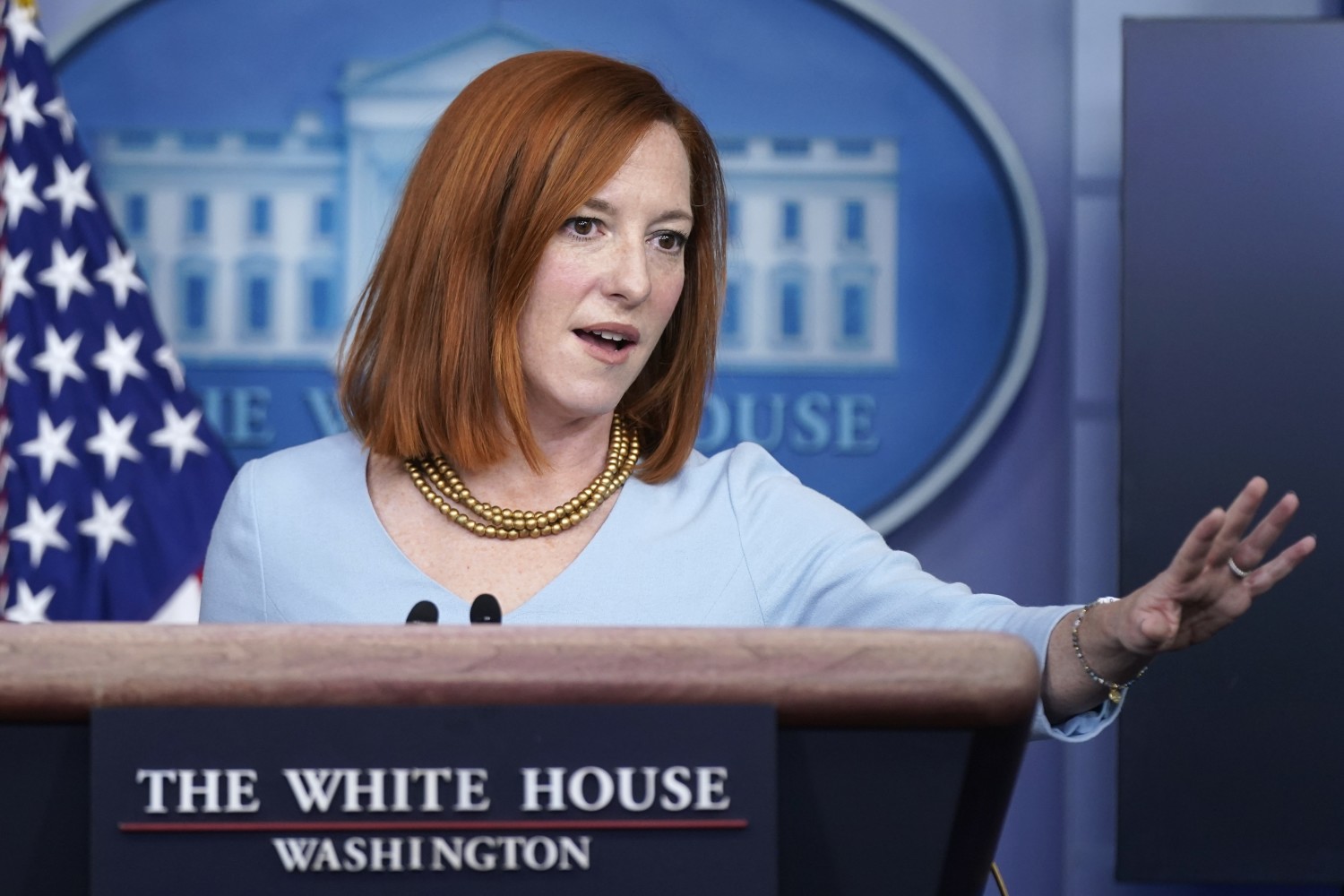 As former President Trump’s second impeachment trial opened Tuesday, the White House press secretary made it clear in the briefing room — three times — that President Biden had nothing to say about it.

“Joe Biden is the president. He’s not a pundit,” Jen Psaki told the 14 reporters seated before her. “He’s not going to opine on the back-and-forth arguments in the Senate, nor is he watching them.”

Biden echoed that assertion moments later as he sat in the Oval Office to discuss his top priority, a $1.9-trillion coronavirus relief package, with a group of business leaders. A day later when Psaki appeared in the briefing room, reporters pressed her about Biden’s refusal to comment on the “historic” events occurring in the Senate. One, seemingly incredulous, asked just how the public “should interpret his silence?”

“The American public,” Psaki said, “should read it as his commitment on delivering on exactly what they elected him to do, which is not to be a commentator on the daily developments of an impeachment trial.”

After four years of Trump’s chaotic approach to leadership, Biden and his new administration have sought to make message discipline great again. However disorienting that may be for reporters accustomed to the media-focused, camera-hungry Trump opining daily on everything from trade wars to TV ratings, Biden’s determination to drive a narrow, focused message marks a return to a more traditional, time-honored way of operating.

“The new normal is the old normal,” said Frank Sesno, a former CNN White House correspondent who served as director of the School of Media and Public Affairs at George Washington University for 11 years.

“These guys are bending over backwards and doing triple somersaults to show that they’re disciplined and that they’re grownups and hard at work — to convey to the press but, more importantly, the public that the big shift is one from chaos and freelance communication reflecting chaos governance to discipline across the board, in message and policy,” Sesno added. “And it’s still the press’ responsibility to to poke holes in that. That’s the way it normally works.”

Reminding reporters that Biden has already criticized Trump for his role in inciting on the Jan. 6 insurrection at the Capitol, Psaki on Wednesday cited several comments he made in the immediate aftermath. There was no other outward acknowledgement from the White House of the Senate trial, which has featured video clips of the mob storming the Capitol and forcing lawmakers to flee. The dramatic revelations and proceedings were carried live on the main cable news networks, overshadowing Biden’s afternoon remarks to military personnel at the Pentagon.

Inside the West Wing, however, there was some anxiety over the strategy. As senior staffers watched the trial on televisions adorning walls and desks, they exchanged several emails that one official described as a “gut check,” reassuring themselves that they were in “the right place” in ignoring the biggest news story in town. White House aides, the official said, have begun to think about how Biden might address the nation once the trial concludes but continue to believe he’s better off not weighing during the trial.

During an Oval Office meeting with senators Thursday morning, Biden reiterated to reporters that he hadn’t watched the trial live because “I’m focused on my job.” He did admit having seen news coverage of the day’s searing videos of the Capitol siege, expressing hope that “some minds may be changed” by it.

As he did with a visit to the Pentagon, Biden’s infrastructure-focused meeting on Thursday was another effort to emphasize his “at work” message. He planned to put a little physical distance between himself and the trial by visiting a lab at the National Institutes of Health in Bethesda, Md., in the afternoon.

Whatever the temptation might be, participating in this moment of national catharsis likely carries little political upside for the new president, tasked with leading the country out of a deep public health and economic crisis, said Cornell Belcher, a Democratic pollster.

“Two months from now, Americans are going to be judging him on his COVID response and whether they have a stimulus check,” he said. “Being embroiled in the back and forth of Congress runs the risk of diluting their message. They’ve got to stay focused on the big picture, and they are.”

The administration’s reluctance to weigh in on the stories dominating the day’s cable news or social media chatter is not limited to this week’s impeachment trial.

Psaki has also refused to comment on inflammatory and racist statements made by Rep. Marjorie Taylor Green (R-Ga.) or the subsequent effort by House Democrats to revoke her committee assignments, stating emphatically: “I am not going to speak further about her, I think, in this briefing room.”

Her daily appearances offer a recurring, televised microcosm of a presidency seeking to restore traditional norms. For all her avoidance of Trump-related topics, there is no mistaking Psaki’s eagerness to emphasize the sharp contrast between Biden’s low-key style and the chaotic melodrama that characterized Trump’s term. In a room that the last administration utilized mainly as theater of often vitriolic combat, the new press secretary has sought to avoid controversies.

Asked Tuesday, for example, about Biden’s willingness to meet with JPMorgan Chase Chief Executive Jamie Dimon despite reports that big banks have scaled back consumer lending amid the pandemic, Psaki sidestepped the question, replying that the new president “does not have a litmus test … that he gives people before he meets with them in the Oval Office.”

In some instances, her deflections are presented as part of a reeducation effort offering important reminders for reporters and the public about coequal branches of government and that the government’s executive branch is not limited to the White House, another point of emphasis for Biden and senior officials.

“We of course respect the role of regulatory agencies,” she said during a Jan. 29 briefing as she redirected a question about the social media-driven spike in GameStop stock to the Securities and Exchange Commission. “Part of our education can be conveying to people that the SEC is the regulatory body that can oversee this and can speak to it further.”

During the same briefing, Psaki told reporters that approval for a Johnson & Johnson COVID-19 vaccine would come from the Food and Drug Administration, not the White House; and she noted that any comments about investigating New York’s apparent misrepresentation of COVID deaths in nursing homes would come from the Justice Department.

Making the implicit subtext of her comments more explicit, she added: “We’re in a new age where they’re independent.”

The administration’s refusal to engage on ancillary issues has kept the focus on its advocacy for the American Rescue Plan, Biden’s massive coronavirus relief package being marked up this week by the House.

Polls this week show the proposal, which includes direct relief checks, billions for vaccine distribution, school reopenings and an extension of unemployment benefits, with overwhelming support from the public. According to a CBS News/YouGov poll, 83% of Americans support the plan and 64% approve of Biden’s handling of the pandemic so far. Additionally, 79% of respondents believe the size of the package — Republicans have said the $1.9-trillion price tag is too high — is either adequate or not enough, validating the administration’s refrain that there is greater risk for the country in doing too little amid the crisis than in doing too much.

Jennifer Palmieri, a former White House communications director during the Obama administration who worked alongside Biden Chief of Staff Ronald Klain, Psaki and several others now on their second turn in the White House, said the Biden team’s experience and focus have served them well. Her former colleagues also know, she said, that no honeymoon lasts forever.

“They’ve all been there, so they all know it can turn so quickly,” Palmieri said. “But that good start didn’t happen by accident. It’s decades and decades of experience.”