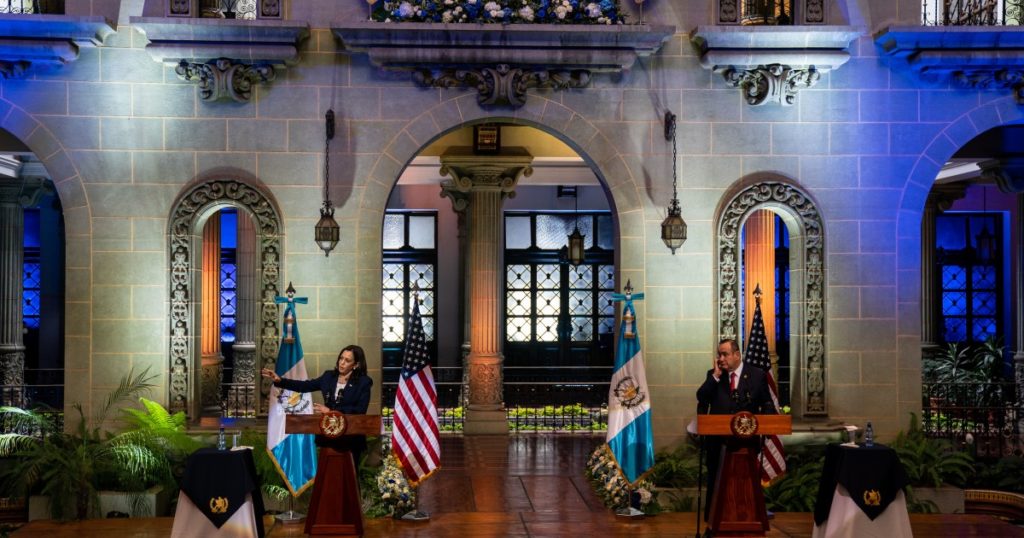 When Joe Biden was vice president, his first trip abroad was a cakewalk.

That is, it was a breeze compared to Kamala Harris’ debut on the world stage this week in Latin America, where she tried to deliver a tough message on corruption and immigration to an unfamiliar crew of balky male leaders.

Less than three weeks after President Obama’s inauguration in 2009, Biden attended an annual security-policy conference of world leaders in Munich, Germany, where he spoke to a friendly crowd that knew him well from his decades as a senator and chairman of the Foreign Relations Committee. And Biden delivered a message his audience longed to hear: After eight years of President George W. Bush’s go-it-alone foreign policy, Biden told European allies he came to “set a new tone.”

Harris’ assignment would have been tough for anyone, even an experienced diplomat, to execute: dealing with a polarizing, intractable problem decades in the making, , while meeting with leaders of a volatile, often violent region. It was a trial by fire for someone with relatively little experience abroad. The pressure was intensified by the inevitable scrutiny that comes from being both the first woman and first woman of color in the role.

“It was a much tougher task: She walked into the lion’s den, whereas he walked into a clubhouse with some of his best mates,” said Ivo Daalder, the Obama administration’s ambassador to NATO. “It would have been difficult for Biden to make a misstep. … He was sending a message, ‘We love you.’”

Biden has often said that he wants to model Harris’ role in his administration on his own relationship with President Obama, who promised Biden he’d be the “last person in the room” advising him on big decisions. And Obama delegated a full portfolio of domestic and foreign policy issues to his vice president. In that spirit, Biden gave Harris responsibility for an especially nettlesome, politically sensitive problem of the highest order: how to address the root causes — poverty, violence and corruption — driving people to migrate from Central America in numbers that have caused crises at the U.S.-Mexico border.

The contrast between the two vice presidents’ maiden foreign trips underscores some of the basic differences between their vice presidencies — the foreign policy challenges they face, the skills they bring to the job, and the significance of their place in U.S. leadership.

Harris embarked on her trip under the limelight that always shines on a barrier-breaker. She inspired intense curiosity about how she would perform on her two-day trip to Guatemala and Mexico, countries where racism and sexism remain commonplace. Major and minor news outlets swarmed, bringing klieg lights, persistent reporters and big-name anchors to capture a moment in history they expected to reveal much about a political figure that Americans are still getting to know. Everything she said and did was put under a microscope, magnifying her missteps like a clumsy answer on why she had not yet visited the U.S.-Mexico border. She responded defensively, saying she had not visited Europe either.

Biden’s first vice presidential trip abroad was also important, but much more ho-hum. It received serious media attention, but it did not crack the front pages of major newspapers such as the Los Angeles Times and the New York Times. The coverage was not marbled with judgmental observations about how the new vice president was handling himself. He was a known quantity to Americans, and to the people attending the security conference, an annual affair that he attended regularly as a senator. His trip was more like a fraternity meeting than a coming-out party.

His responsibilities on the trip were weighty: He was delivering the administration’s first major foreign policy address at a conference with a high-altitude guest list, including German Chancellor Angela Merkel, French President Nicolas Sarkozy and Afghan President Hamid Karzai.

He was speaking at a time when U.S. relations with its allies had been strained under the Bush administration. European leaders had been at odds with the Bush administration over the Iraq war and its often-unilateral approach to world affairs, including the U.S. withdrawal from the Kyoto Protocol on climate change and the International Criminal Court.

“There was a hunger in Europe for a recommitment to the alliance, to working together,” said Daalder. “The whole effort was to make this pitch that we wanted to rebuild our alliances with Europe.”

Harris’ message in Guatemala and Mexico was a far more complicated — offering U.S. support and financial aid for addressing root causes of migration while upbraiding leaders for corruption, offering sympathy for migrants along with a stern admonition “do not come.”

By contrast, Biden’s speech in Munich was music to the ears of European allies. Even before he spoke a word, he received a rousing ovation.

“I come to Europe on behalf of a new administration and an administration that’s determined to set a new tone, not only in Washington but in America’s relations around the world,” he said.

Somewhat more controversial was his effort to strike a more conciliatory note than the Bush administration on relations with Russia.

“It is time to press the reset button and to revisit the many areas where we can and should be working together with Russia,” he said.

The “reset” concept now looks like wishful thinking, as Biden prepares to meet with Russian President Vladimir Putin in Geneva next week: Tensions are high as a result of Russia’s hacking and interference in U.S. elections, its military aggression toward neighbors, and the arrest of a top opposition leader.

On the 12th anniversary of Biden’s Munich speech, Sen. Charles Grassley (R, Iowa) in February put out a statement saying, “The Russia reset was not just a failure, it was ill-conceived and counterproductive from the start.”

Biden’s biggest early assignment in the Obama administration was focused on domestic policy — rounding up votes in Congress for legislation to shore up a ravaged economy, and then overseeing its implementation. But Biden, free of this year’s pandemic restrictions on travel, still managed several other international journeys after Munich within the first six months — to Belgium, Chile, Costa Rica and Kosovo. Throughout his administration, Obama delegated many foreign policy issues — including the war in Iraq — to his vice president.

Indeed, Biden was eventually assigned the same portfolio he gave to Harris — to address the root causes of migration from Central America. But when he travelled to Guatemala on that mission in 2014 and 2015, there was none of the hoopla that attended her trip.

Some of the scrutiny she drew may have had an element of sexism and racism, said Amanda Clayton, a political scientist at Vanderbilt University, who studies gender in politics and finds that women — especially women of color — are under more pressure than men to deliver a flawless public performance.

“White men are given the benefit of the doubt,” said Clayton. “Biden is a case study in gaffe after gaffe, and people forgive him.”

If Harris’s Latin America trip was a tough rite of passage into world affairs, it is a reflection of one thing her vice presidency has in common with Biden’s: She is trying to carve a more consequential role than the largely-ceremonial version of the job that has often prevailed, inspiring the saying that the office is “not worth a bucket of warm spit.”

“We now live in an age where we expect the vice president to do heavy lifting,” said Joel K. Goldstein, a law professor at St. Louis University who is an expert on the vice presidency. “If you’re going to be the ‘last person in the room,’ you are going to draw tough assignments.”