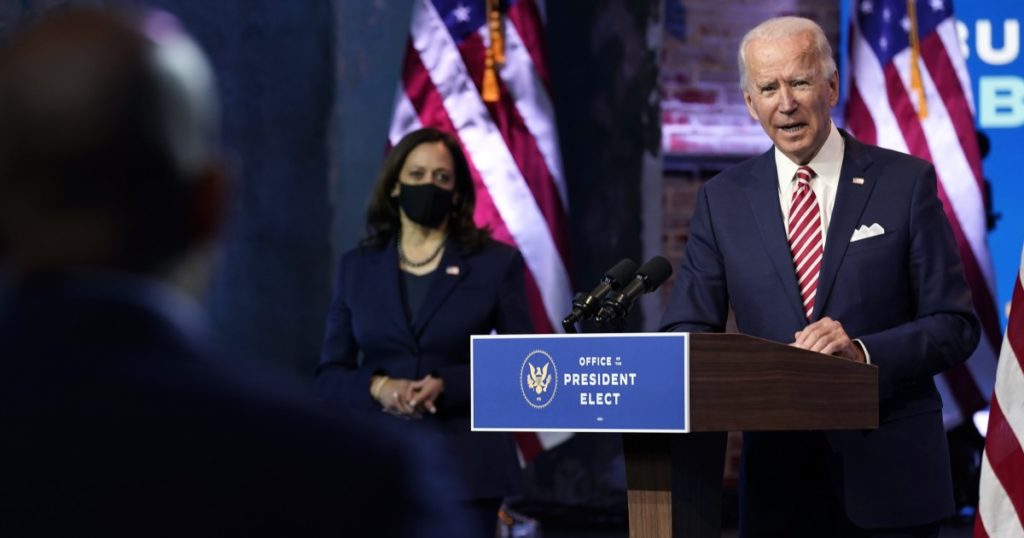 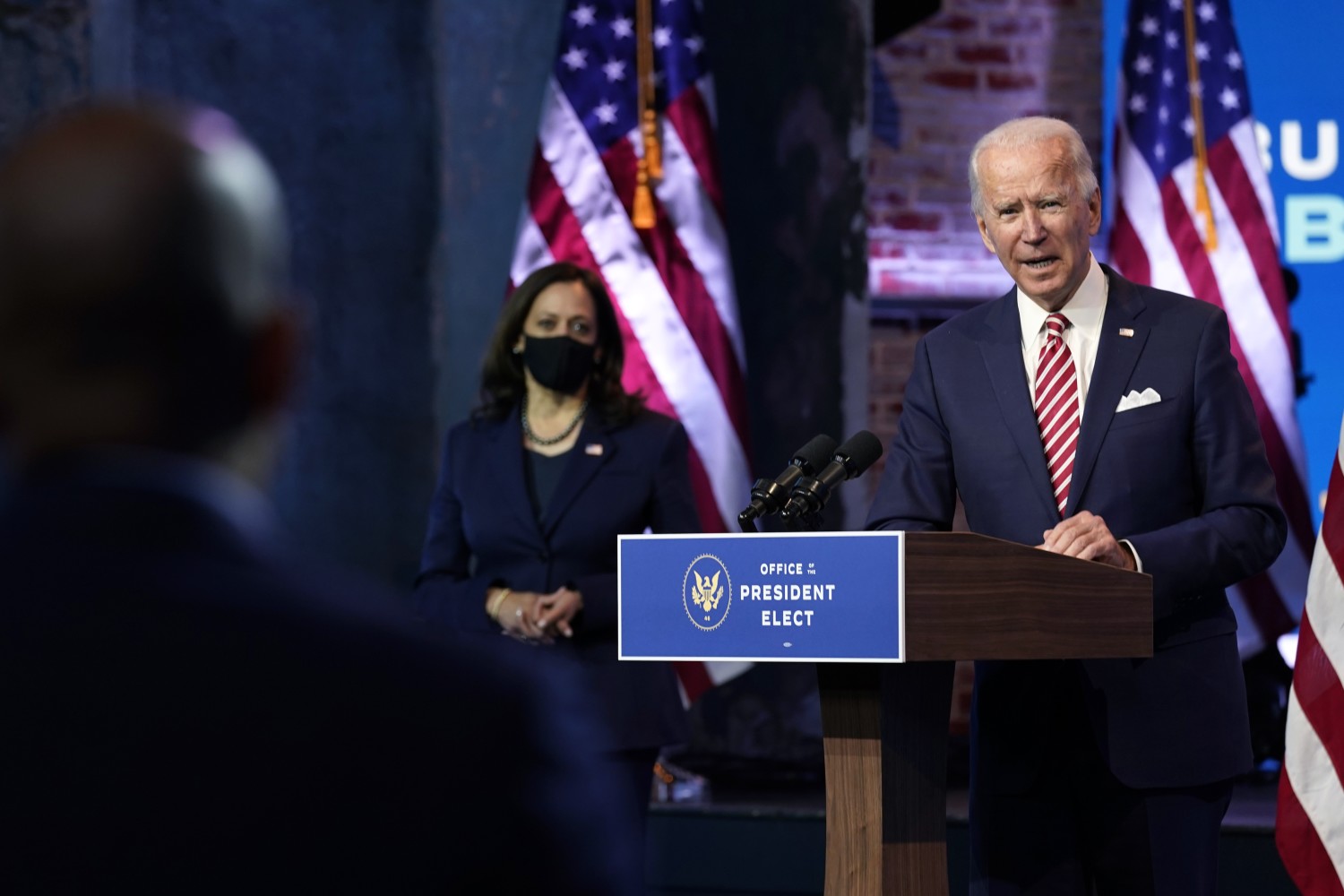 President-elect Joe Biden, faced with worsening economic and health crises, on Monday called for action from two political forces beyond his control: Congress, which is deadlocked over economic relief, and President Trump, who refuses to concede the election and share information about the pandemic and national security.

He welcomed news of progress in developing a second vaccine but emphasized how logistically challenging it will be to distribute — an endeavor further complicated by the Trump administration’s resistance to coordinating with Biden officials, who will be tasked with carrying it out. “The vaccine is important,” Biden said, “but it’s of little importance if you are not vaccinated.”

Biden also called on Congress to pass long-stalled legislation to provide economic relief and public health funding during its lame duck session. But he offered no path to breaking the deadlock that pits House Democrats, who passed a scaled-down $2.2-trillion package as a compromise seven weeks ago, against Senate Republicans, who say that’s still far too expensive.

“For millions of Americans who’ve lost hours and wages or have lost jobs, we can deliver immediate relief and it needs to be done quickly,” Biden said. “The refusal of Democrats and Republicans to cooperate with one another is not due to a mysterious force beyond our control. If we can decide not to cooperate, we can decide to cooperate.”

He intended the conversation as a symbol of his aspiration to unify the country and bring opposing sides together, and joked that he “deserves a Nobel Peace Prize” for bringing the diverse group together.

“We all agree on the common goals, just have a slightly different perspective,” Biden said, noting that he made a point of telling the business leaders that he is a “union man” who plans to empower labor. “I’m convinced we can all come together around the same table to advance areas of common ground,” he said.

Biden as president will immediately have to juggle the competing demands of getting the coronavirus under control and repairing the damage it has inflicted on the economy, though stepped-up public health measures amid the pandemic’s current surge are contributing to a slowed recovery. He has insisted all along that the two policy aims are intertwined, but that the pandemic has to be controlled before the economy can recover.

“Once we shut down the virus, then we can start to build back better,” Biden said in his remarks, his first on the economy since he won the election.

Biden seemed to acknowledge that as president he will face deeper economic and health crises. Coronavirus cases have been surging and neither Trump nor Congress is acting to address the fallout.

“We’re going into a very dark winter,” Biden said. “Things are going to get much tougher before they get easier.”

In California, weekly coronavirus case counts have doubled in the last month. Los Angeles County recorded more than 6,800 cases over the weekend, an alarming jump that has officials talking about more restrictions, such as setting a curfew.

Other states are reinstating stricter social and economic restrictions, only to draw White House fire in some cases.

Trump singled out Ohio Gov. Mike DeWine, a Republican, who reissued a mask-wearing order and said over the weekend that the president should begin the transition to Biden. In a tweet Monday morning, Trump encouraged a Republican primary challenge to DeWine: “Who will be running for Governor of the Great State of Ohio? Will be hotly contested!”

In Michigan, Democratic Gov. Gretchen Whitmer announced new rules for the next three weeks to sharply limit indoor gatherings, suspend in-person school and college classes, and close indoor service for bars and restaurants. Whitmer, already a target of right-wing ire — and a foiled kidnapping attempt — for her earlier restrictions, was denounced by Trump advisor Scott Atlas, who urged Michigan residents to resist, tweeting: “The only way this stops is if people rise up.”

Biden lambasted Trump and his allies for such attacks.

“What the hell’s the matter with these guys? “‘Resist!’” he said. “It’s totally irresponsible.”

Biden, who again urged state and local officials to issue mask mandates, offered praise for the handful of Republican leaders who have rejected Trump’s intransigence on the election outcome and have stepped up the fight against the spread of the virus.

Asked about Trump’s ongoing refusal to acknowledge his defeat and cooperate in the transition, Biden said, “I find this more embarrassing for the country than debilitating for my ability to get started.”

Biden said that his lack of the intelligence briefings usually given to a president-elect was mitigated by one thing: Vice President-elect Kamala Harris, who appeared with Biden, is still a member of the Senate Intelligence Committee, which gives her access to classified material.

He continued to hold out hope that Republicans would be more cooperative once Trump has left the scene. The president-elect said his message to them was, “I will work with you. I understand a lot of your reluctance because of the way the president operates.” He added, “I’ve been in contact with, and I will be in contact with, more of them as we move along.”

Former First Lady Michelle Obama also made a rare political statement Monday in an Instagram post to denounce Trump’s behavior. “This isn’t a game,” she wrote. “So I want to urge all Americans, especially our nation’s leaders, regardless of party, to honor the electoral process and do your part to encourage a smooth transition of power, just as sitting presidents have done throughout our history.”

Looking ahead to the holidays, Biden discussed the coronavirus threat in personal terms when he was asked what advice he would give to families trying to plan celebrations. He noted that he and his wife, Jill, had just been discussing that. For years while he served as vice president, Biden hosted big family dinners on Nantucket.

“Jill and I spent this morning figuring out, like many of you, what to do for Thanksgiving,” he said. He consulted his advisors and said he was told to have no more than 10 people, to maintain social distance and wear masks. He did not disclose which 10 members of his extended family would make the cut.