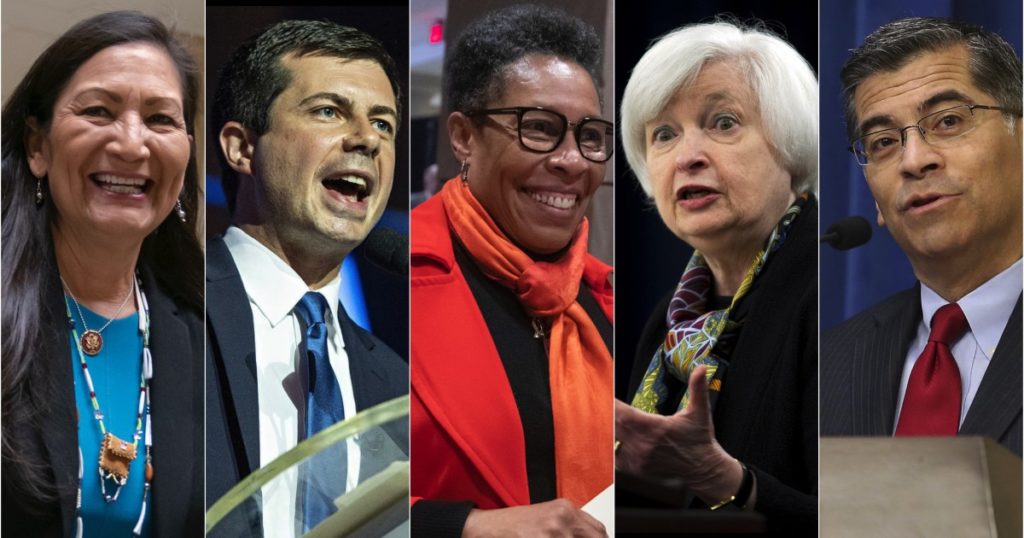 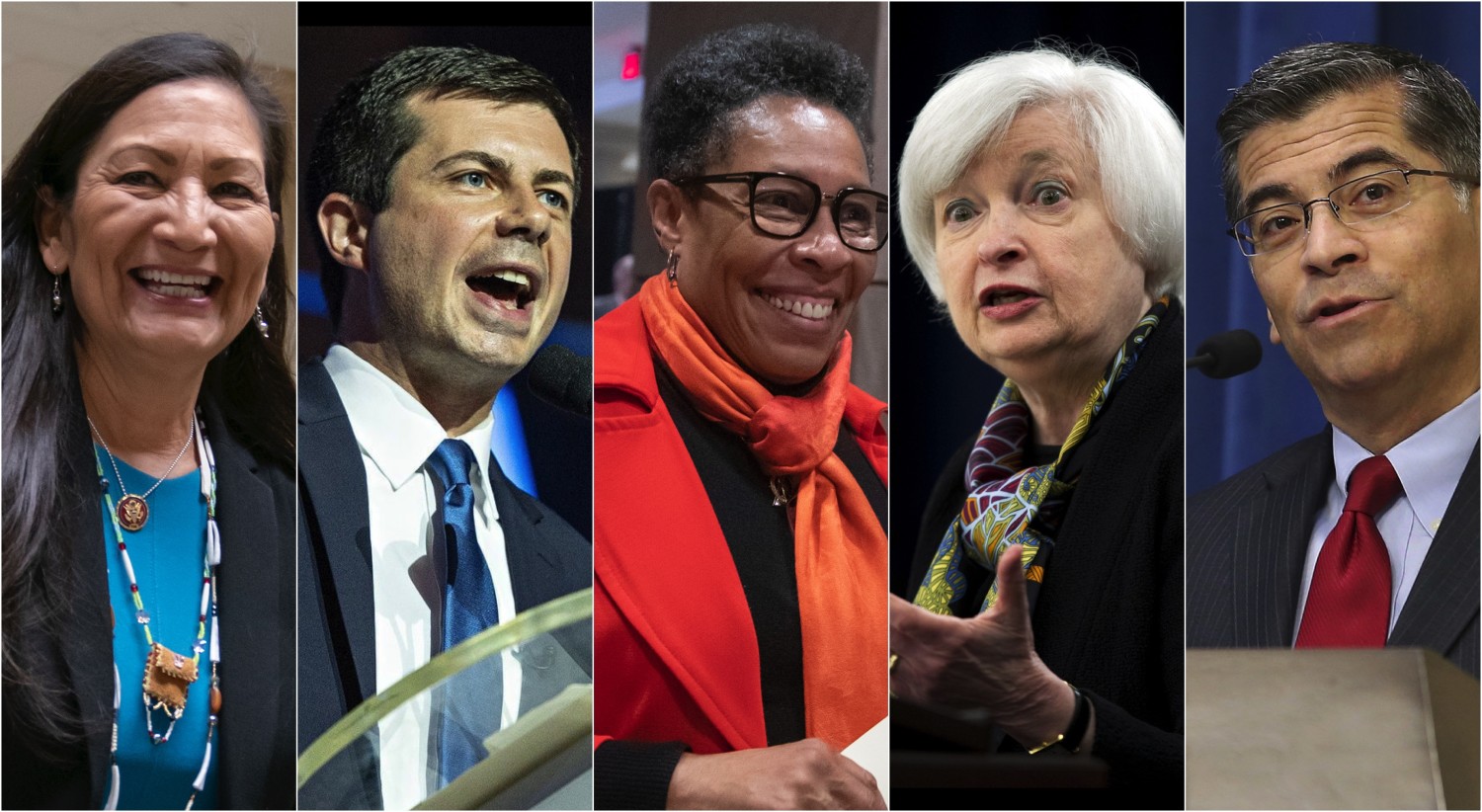 Over the course of the presidential campaign, voters got to see two Joe Bidens: the one who promised to restore stability and competence to government, and another who promised an FDR-style transformation to address social and economic inequities that long predated Donald Trump and the pandemic.

As President-elect Biden has assembled his Cabinet choices in the last month, he has offered up much more restoration than transformation.

Of the first 18 Cabinet-level appointments he has made, two-thirds are alumni of the Obama-Biden administration, or closely tied to one of the men. Two appointees would be doing the same job they had under Obama, as Agriculture secretary and surgeon general. A third of the Cabinet picks are old enough to qualify for Medicare.

Biden vowed to name a diverse Cabinet that “looks like America,” and has followed through with barrier-breaking nominations: the first woman for Treasury secretary; the first Black person to lead the Pentagon; and, with Saturday’s scheduled introduction of Rep. Debra Haaland of New Mexico for Interior secretary, the first Native American in a president’s Cabinet.

“Compared to its predecessors, the Biden-Harris Cabinet is first among Cabinets for all of the firsts it represents,” Biden said Wednesday as he introduced Pete Buttigieg as his choice for Transportation secretary — the first openly gay person to be nominated to lead a Cabinet department.

“Our Cabinet does not just have one ‘first’ or just two of these firsts, but eight precedent-busting appointments,” Biden said.

Yet he sounded a bit defensive after weeks of being buffeted by various Democratic constituencies clamoring for like-minded candidates to have seats at the Cabinet table.

For all of his prospective Cabinet’s racial and ethnic diversity, Biden’s choices also amount to a Cabinet that looks, through another lens, like him: older, experienced, reassuring. In his view, it is responsive to what he took as one of his strongest mandates from the election: to return the capital and the country to “normal.”

“This is what 81 million people voted for,” said Biden spokesman T.J. Ducklo. “It was central to Joe Biden’s campaign: to bring experience and to hit the ground running.”

Democrats say that especially amid economic and health crises, it makes particular sense to pick experienced people who have the skills to “hit the ground running” in government agencies that have been hollowed out, underfunded and demoralized in the Trump years.

“It is a Cabinet of practitioners, of returning to norms, of making government work by a lot of people who have made it work in the past,” said Robert Gibbs, a former Obama advisor. “The damage done to the working of government has been so broad and devastating that people who have done this before are needed to do the important repair work.”

Biden’s campaign initially focused on his pledge to bring back a more stable and decent style of governance. But, especially after the pandemic hit, he increasingly acknowledged the long-building inequities in income and opportunities that Trump’s policies had only exacerbated.

Candidate Biden began proposing more transformative ideas. His Cabinet lineup, however, is light so far on strong progressives who were encouraged by that late-campaign echo of New Deal-style ambitions. That may reflect, in part, a calculation about what it will take to win confirmations in a Senate that, if not controlled by Republicans, will be nearly evenly split between the two major parties.

Still, activists on the left hailed the selection of Haaland, a former co-chair of Massachusetts Sen. Elizabeth Warren’s Democratic presidential campaign, and believe they have had a hand in derailing some potential appointees they found objectionable.

Those included Mary Nichols, a California clean-air regulator who had been in line to head the Environmental Protection Agency. Biden instead picked Michael Regan, North Carolina’s top environmental regulator, who would be the first Black man to head the EPA.

Another Democrat who had been a top Cabinet contender, business-friendly Rhode Island Gov. Gina Raimondo, fell out of favor after drawing union opposition for her record of curbing public pension benefits.

“Biden’s Cabinet as a class is more progressive than Obama’s so far,” said Maurice Mitchell, national director of the progressive Working Families Party. “Joe Biden won the election and he certainly has the right to assemble his Cabinet. But he did not win the election by himself. He won with a coalition that included progressives.”

It is common for presidents to fill their Cabinets with trusted allies and veterans of previous administrations of the same party. However, they do not always pick like-minded advisors. A 2011 study by two political scientists then at the University of Southern California — Anthony M. Bertelli and Christian R. Grose — found that 85% of Cabinet members in Bill Clinton’s administration had ideologies that diverged significantly from the president’s.

Still, when Clinton picked his first Cabinet, it was thick with longtime friends including Mickey Kantor as U.S. trade representative and Bruce Babbitt as Interior secretary. Like Clinton himself, who was 46, his Cabinet skewed younger than 78-year-old Biden’s nominees. The average age of Clinton’s first Cabinet was 51; for Biden’s picks, the average so far is about 59.

Like Biden, Clinton faced criticism for not picking more women and people of color. At one point before his 1993 inauguration, he lashed out at his critics as “bean counters” who were “playing quota games and math games.”

When Obama initially picked his Cabinet, he included many former Clinton aides and — ironically for the first Black president — also came under criticism for picking too many old hands and white men. But he had relatively little Washington experience — he’d been a first-term senator —and, like Biden, faced a deep economic crisis. So he put a premium on experience and competence in choosing his team.

Obama was more aggressive than Biden in bringing former opponents into his inner circles, inviting comparisons to President Lincoln’s “team of rivals.” He picked his most daunting presidential primary rival, Hillary Clinton, to be his secretary of State, and at least three of his other Cabinet choices had backed her in the Democratic nomination contest. Obama also included two Republicans.

Biden’s top Democratic presidential rivals, Warren and Sen. Bernie Sanders of Vermont, wanted Cabinet posts — Treasury and Labor, respectively — but the Treasury slot went to Janet Yellen, Obama’s chairman first of the Council of Economic Advisors and then of the Federal Reserve; and Sanders seems unlikely to get the nod for Labor. Biden’s only rival selected so far for the Cabinet, Buttigieg, would hold a second-tier job as Transportation secretary.

Many progressives were furious when Biden picked Tom Vilsack , Obama’s Agriculture secretary during both his terms, for a return engagement. Black and civil rights groups criticized Vilsack’s record on helping Black farmers when he led the department; they were pushing instead for Rep. Marcia L. Fudge, a Black Democrat from Ohio who has been picked instead for secretary of Housing and Urban Development.

The left also raised vigorous objections after reports that Biden was considering a Cabinet post for Rahm Emanuel, Obama’s first chief of staff, who as mayor of Chicago was heavily criticized for his handling of the police shooting of a Black teenager.

Many were encouraged by Biden’s pick of Yellen, who is the rare candidate to enjoy the strong support of Wall Street and business as well as progressive groups.

She held a video meeting recently with progressive advocates for social and economic justice. Rashad Robinson, president of the civil rights group Color of Change, was impressed with her, but said activists would be pressing the Biden administration on policy long after its personnel roster is set.