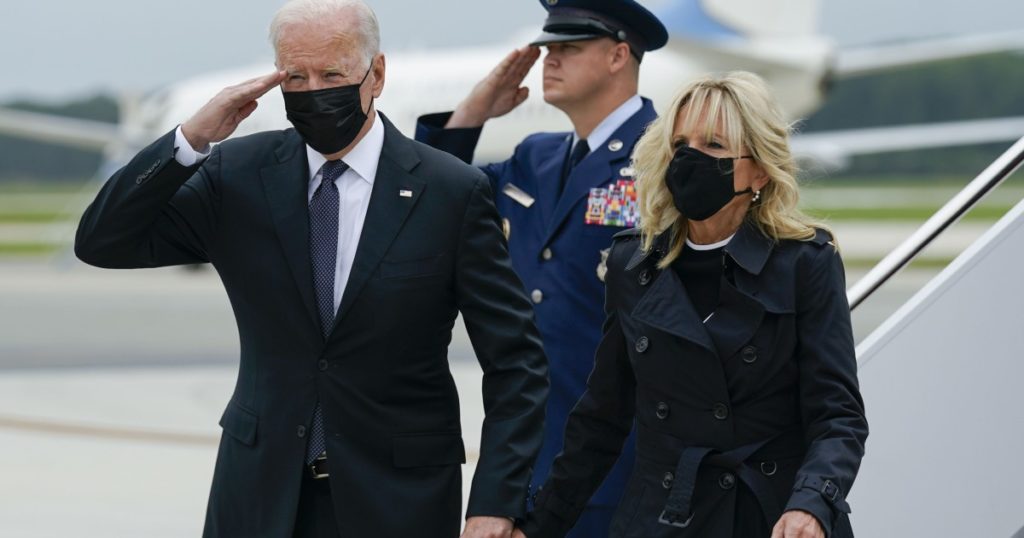 President Biden left the White House early Sunday morning for a drive under cloudy skies to a nearby military base, where he boarded Air Force One with First Lady Jill Biden. He wore a black suit rather than his typical blue, and his destination was someplace he hoped never to visit while serving as commander in chief.

He soon touched down at Dover Air Force Base, which has spent the last two decades as a point of return for U.S. service members who died in Afghanistan. Biden announced this year that he would withdraw troops from the country, saying he was not willing to send any more American sons and daughters to die there.

But in order to safeguard the evacuation of U.S. citizens and Afghan allies after the Taliban swept into Kabul this month, he deployed thousands more service members to provide security at the airport. It’s a dangerous mission, leaving them vulnerable to terrorist attacks as they screen potential travelers.

Those fears were realized Thursday, when a suicide bomber from an affiliate of the Islamic State terrorist group blew himself up at an airport gate. Eleven Marines, one Army soldier and one Navy corpsman died, along with nearly 200 Afghans.

So like his predecessors, Biden went to Dover on Sunday to meet with the families who lost sons and daughters in America’s longest war days before it was scheduled to end. After the private meetings, he would witness what’s known as a dignified transfer, as flag-draped cases containing human remains were unloaded from the back of a cargo plane.

“They were part of the bravest, most capable, and the most selfless military on the face of the Earth. And they were part of, simply, what I call the backbone of America,” Biden said Thursday. “They’re the spine of America, the best the country has to offer.”

Several of the dead were infants or toddlers during the Sept. 11, 2001, terrorist attacks that sparked the invasion of Afghanistan, a grim reminder of how long U.S. troops have served there.

It’s unclear if they will be the final U.S. deaths in the war. The evacuation effort is scheduled to last two more days, and there are an estimated 300 American citizens still trying to leave.

Biden warned Saturday that “the situation on the ground continues to be extremely dangerous,” and another attack is “highly likely.”

Later that night, U.S. officials warned Americans to “immediately” avoid the airport for their own safety. Another attack might have been foiled Sunday by a U.S. drone strike, which officials said targeted a vehicle ferrying additional suicide bombers toward the airport.

“Significant secondary explosions from the vehicle indicated the presence of a substantial amount of explosive material,” said Capt. Bill Urban of U.S. Central Command, which oversees operations in Afghanistan.

Roughly 2,500 U.S. service members have died in Afghanistan since the war began. Former President Trump began the withdrawal process by reaching an agreement with the Taliban last year.

Biden pushed back the deadline for pulling out, but he’s been adamant about finishing the withdrawal.

“We went to Afghanistan because of a horrific attack that happened 20 years ago,” he said in April when announcing his plans. “That cannot explain why we should remain there in 2021.”

After making his announcement, he visited Section 60 of Arlington National Cemetery, where U.S. troops who died in Afghanistan are buried. Rows of identical white headstones lined the green grass.

“Hard to believe, isn’t it?” Biden said after laying a wreath.

There could soon be fresh graves there.