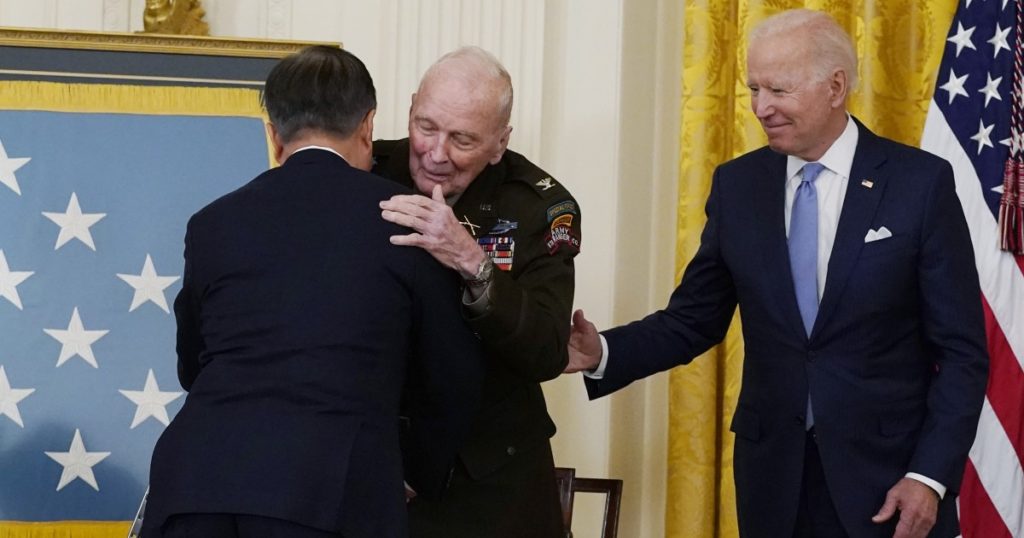 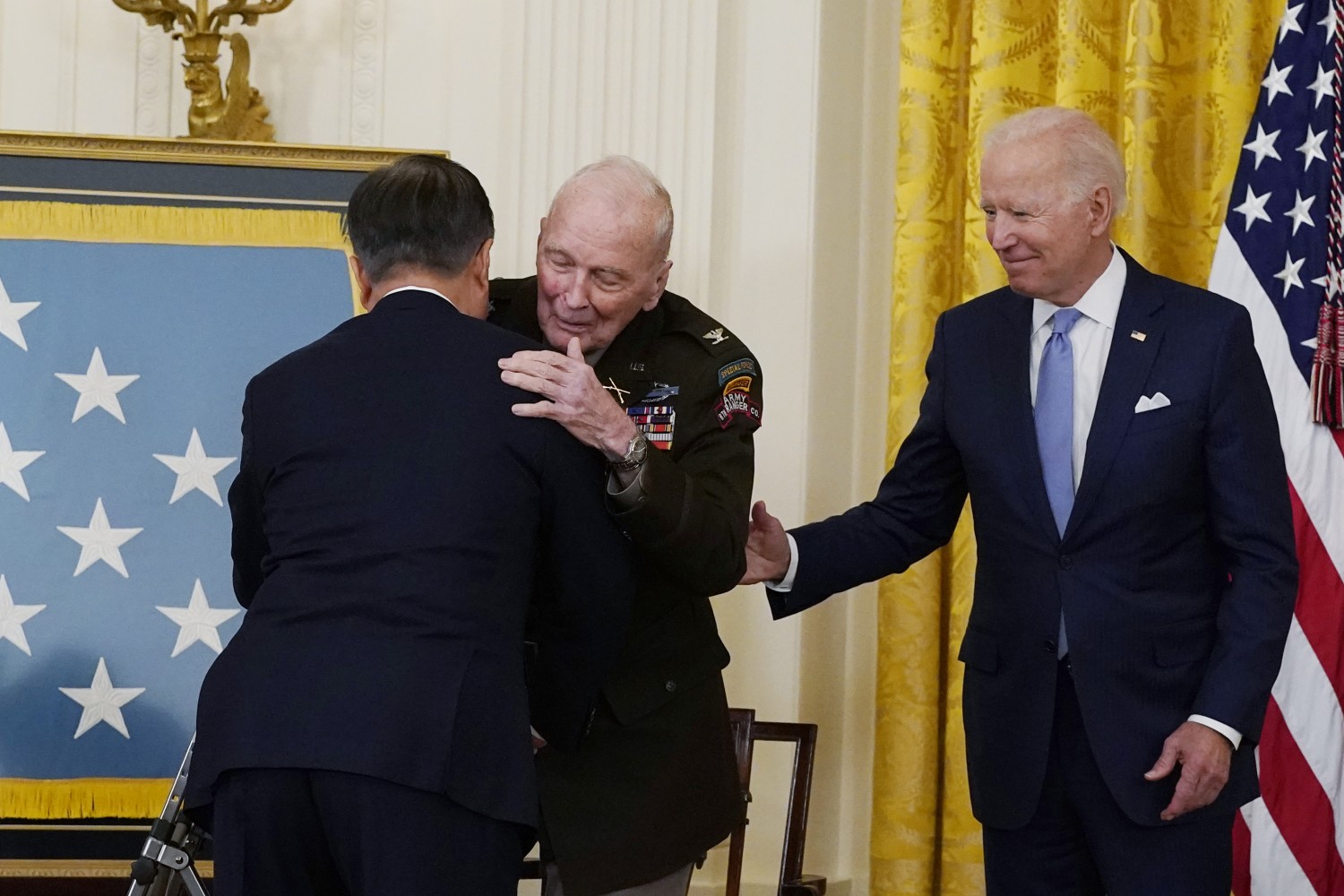 Moon joined Biden in awarding the Medal of Honor to a Korean War veteran, retired Army Col. Ralph Puckett, marking the first time a foreign leader has taken part in the ritual, according to the White House. It was also the first time Biden has presented the nation’s highest military honor.

“The strength of the alliance between the United States and the Republic of Korea was born out of the courage, determination and sacrifice of the Korean troops fighting shoulder to shoulder with American troops,” Biden said in welcoming Moon at the ceremony in the East Room. “Having you here today is an important recognition of all that our nations have achieved together.”

Puckett, 94, led 51 Army Rangers in fighting off successive waves of enemy counterattacks after his foot was nearly blown off by a grenade. Rescued by his men, who were inspired by his heroism, Puckett recovered from his injuries and went on to serve in the Vietnam War as well.

Biden lauded Puckett, who sat on the dais in full military uniform, as a “true American hero” and said he was “humbled” to have him at the White House for an honor the president said was “70 years overdue.”

Moon credited Puckett and American forces broadly with helping to preserve democracy in South Korea. “Col. Puckett and his fellow warriors are a link that binds the U.S. and Korea together,” he said.

The presidents’ summit, which also includes closed-door meetings and a joint news conference, presented another opportunity forBiden to signal his intent to strengthen the United States’ alliances in Asia as a counter to China’s rising economic and military power.

The meeting, just over a month after Biden hosted Japan’s prime minister, follows a two-week stretch in which his foreign policy focus was diverted to the Middle East, amid a violent conflict between Israel and Palestinians in Gaza until a cease-fire Friday. The two leaders plan to announce new agreements between the U.S. and South Korea.

According to aides who previewed the meeting, Biden is likely to come away with new trade agreements and investment commitments from Korean business, as well as a promise by Seoul to set a more ambitious goal to reduce carbon emissions by the year 2030.

In return, Moon may receive assistance to enhance his country’s supply of coronavirus vaccine. It is unclear whether he can persuade Biden to support his efforts to ease tensions with nuclear-armed North Korea, perhaps by supporting an official declaration of an end to the Korean War.

Moon, speaking through a translator, said, “Korea, as a responsible ally that shares core values with the United States, will always stand by America on its journey of recovering from COVID-19 crisis and defending liberal, democratic international order.”

He also expressed support for “ambitious climate action” and vowed to “coordinate with the U.S. with no daylight to achieve complete denuclearization and establish permanent peace on the Korean Peninsula.”

Moon, who met with House Speaker Nancy Pelosi (D-San Francisco) on Thursday, began his day at the White House on Friday with Vice President Kamala Harris. In a short appearance before reporters, Harris emphasized the importance of the U.S.-South Korea relationship and optimism about greater collaboration in the Indo-Pacific region.

“At a time when our world faces increasing threats to our health, security and climate, it is more important than ever that the United States and the Republic of Korea work closely together,” Harris said.

She also alluded to the close ties between her hometown and South Korea, telling Moon that “the largest Korean diaspora outside of Asia — I think outside of Korea, actually — is where I live, in Los Angeles, California.”