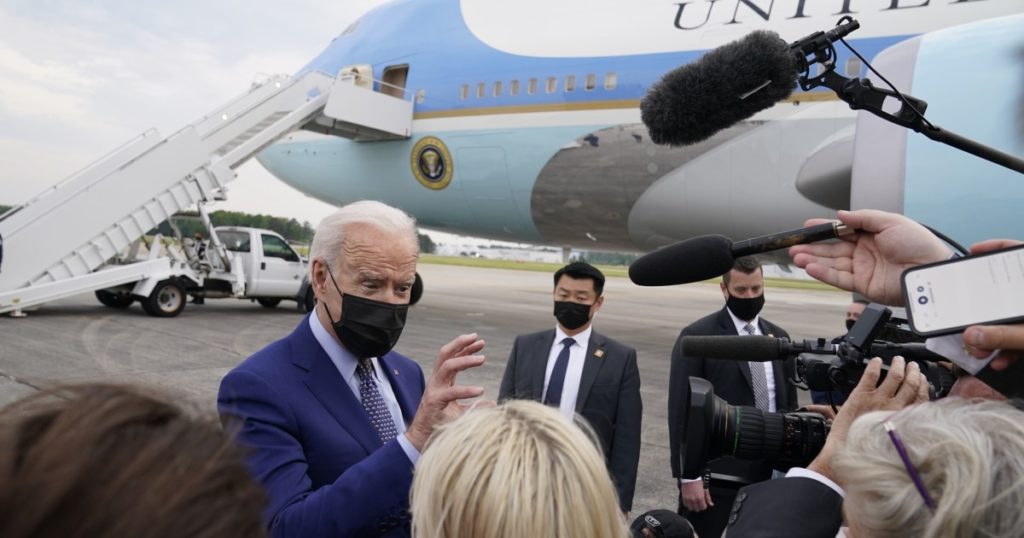 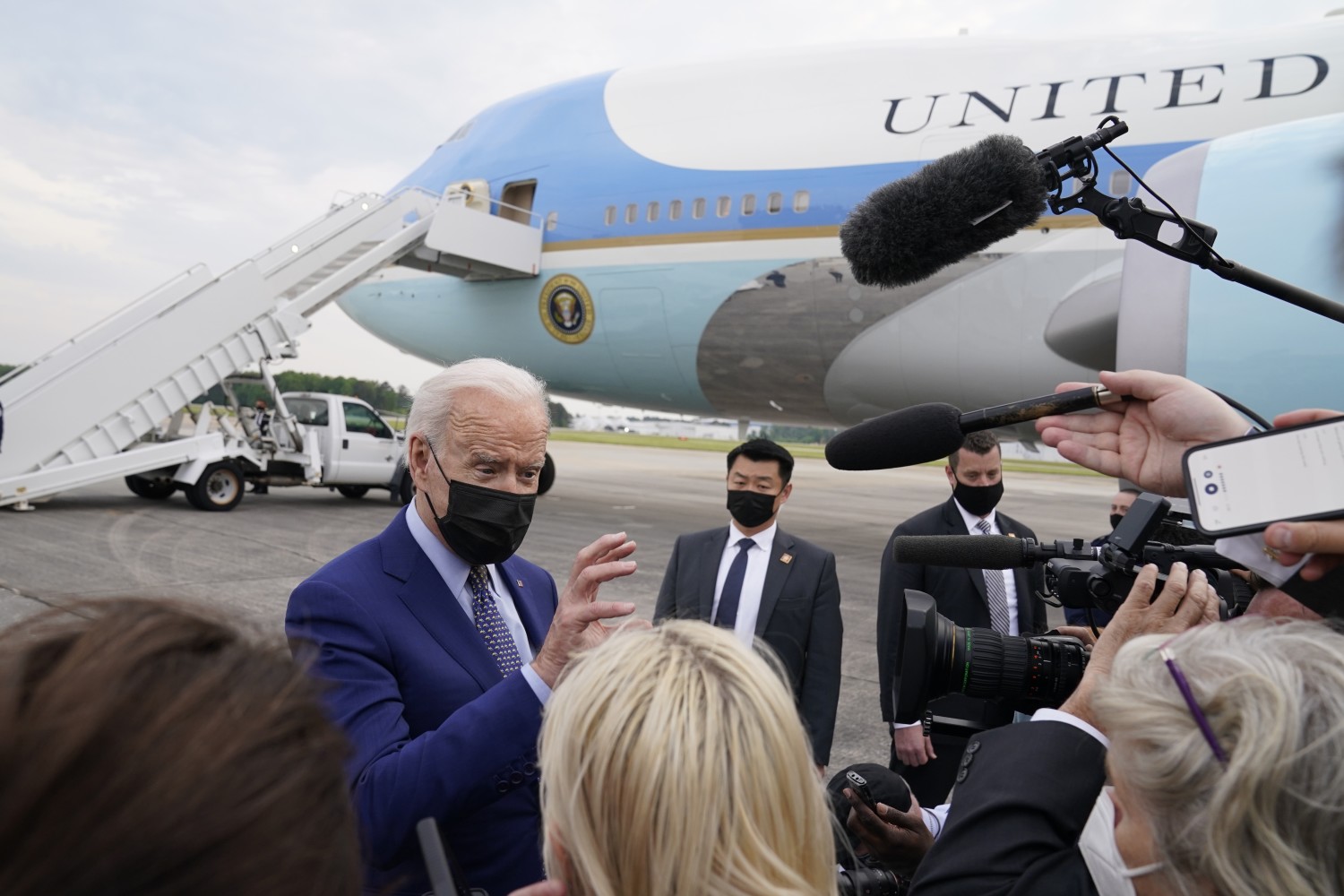 In an era dominated by national cable news and Twitter controversy, the old-fashioned local photo op may not be worth as much as it once was. But President Biden is bringing it back and making his administration’s barnstorming effort more of a collective, family affair.

Following his rally Thursday night in Georgia to mark his 100th day in office, the president and First Lady Jill Biden are hitting the road — the rails, really — again on Friday, continuing an effort to generate buzz for the administration’s sweeping recovery agenda.

Biden, who as a senator famously rode Amtrak daily between his Delaware home and Washington, will press for his $2.25-trillion infrastructure proposal at the rail line’s 30th Street Station in Philadelphia on Friday afternoon before taking a train, along with the first lady, down to Wilmington, Del., for the weekend. The speech will also serve to mark Amtrak’s 50th anniversary, which Biden noted in a tweet.

Meanwhile, Vice President Kamala Harris, who stumped in Baltimore on Thursday, is traveling to Cincinnati, where she will lead a roundtable on the so-called American Jobs Plan, the administration’s package of investments in improving and modernizing the nation’s roads, bridges, airports, rail lines and broadband infrastructure.

And Second Gentleman Douglas Emhoff is in North Carolina alongside Transportation Secretary Pete Buttigieg for three events touting the potential benefits of the administration’s plan.

At a union hall in Raleigh, Buttigieg, sticking to Biden’s own script, touted the infrastructure investments as a matter of job creation. “These are not mysterious jobs,” he told the teamsters in the crowd. “We’re talking about needing carpenters and electrical workers.”

This isn’t the new administration’s first coordinated swing-state outreach — Biden, Harris and their spouses all hit the road in March for a victory lap following Congress’ passage of the president’s $1.9-trillion coronavirus relief package. And it’s a classic presidential play.

But the administration’s focus and message discipline, not to mention the deployment of multiple officials and spouses fanning out across the country, is an about-face from the Trump years and a frenetic presidency that was mostly a one-man show.

Much of Biden’s message is framed in contrast to his predecessor, an effort to convince Americans that the chaos of the past four years — and the woes of a year lost in many ways to the pandemic — is behind them. At his rally Thursday evening in suburban Atlanta, Biden was flanked by massive signs that read: “Getting Back on Track.”

Touting the progress of Biden’s first 100 days and hammering a clear policy agenda in battleground states are part of an effort to solidify Democrats’ recent gains. It’s vital political spadework ahead of next year’s midterm elections, which traditionally favor the party out of the White House. Given how thin Democrats’ congressional majorities are, and the prospect of redistricting further tipping the scales toward Republicans in 2022, the success of this effort will go a long way toward determining control of Congress and Biden’s ability to get anything done in the third and fourth years of his term.

The question is whether this sort of focused sales pitch, following a time-tested presidential template until Trump broke the mold, will have a measurable impact in boosting support for Biden’s ambitious proposals, which also include the $1.8-trillion American Families Plan, an array of investments and tax subsidies aimed at helping workers and parents.

While a handful of Republican lawmakers have issued a counterproposal on infrastructure, showing an interest in engaging in bipartisan talks to potentially arrive at a compromise, GOP officials on the whole have dismissed the combined $4 trillion in spending proposals as “socialism,” unswayed by public polling showing that many of Biden’s proposals are popular.

In response, the president and his surrogates are talking up the specific components of Biden’s populist agenda — the tangible benefits individuals and families could receive if enacted — that they believe resonate most with the public, trying to avoid the blanket label of “Democratic” plans.

And Biden, while pushing a deeply progressive agenda, has been careful to maintain an affable, nonconfrontational posture with the GOP. On Thursday, he said he had a “warm conversation” by phone with Sen. Shelley Moore-Capito (R-W.Va.), who is her party’s lead negotiator on infrastructure, and laid out a framework for talks in the coming weeks.

During a conversation with reporters in Georgia, Biden said the first step is figuring out “what are [Republicans] prepared to consider in terms of what constitutes infrastructure, how much of it, and then we can talk about how to pay for it if we get to the point that we actually have a real number.”

But, he continued, if Republicans offer a small fraction of his proposed investments as an ultimatum, as the party did with its counteroffer on COVID-19 relief, “it’s a no-go for me.”

After failing to mount any sort of effective opposition to Biden’s COVID-19 relief package earlier this year, Republicans eager to win back control of the House and Senate next November are increasingly determined not to allow the White House so much political space to maneuver — and to block additional policy achievements that could give Democrats a stronger argument with voters.

In Philadelphia later, Biden is likely to tailor his pitch to the state’s specific needs. Hours before his arrival, the White House distributed a fact sheet that included a number of statistics highlighting the infrastructure needs in the Keystone State, where, the administration noted, there are more than 3,300 bridges and 7,500 miles of highway in poor condition.

The White House is betting that generating local headlines can still bear fruit, even in an age of increasingly nationalized news coverage and seemingly sectarian partisan divisions. But the administration is also flooding the airwaves, with Biden sitting for a “Today” show interview the morning after his first address to a joint session of Congress and other administration officials doing a mix of national and local TV interviews from the White House.

And an outside group of Biden allies known as Building Back Better is set to hit the airwaves next week in Pennsylvania, Nevada, Wisconsin and Georgia with $3 million in TV ads highlighting the president’s work to combat the pandemic and his plans for a robust economic recovery. The New York Times Friday was first to report on the ad blitz.