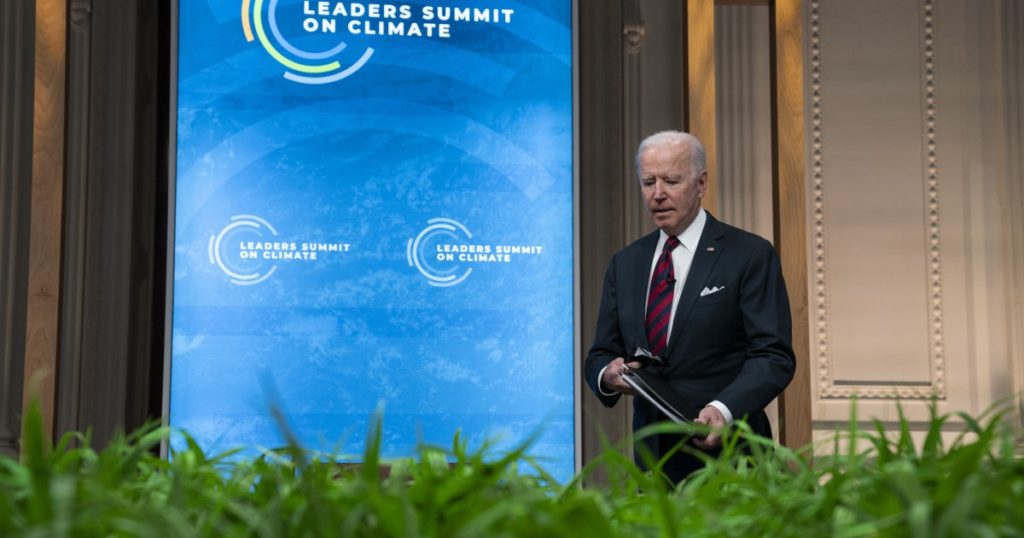 Leaders of 40 countries told the world at a U.S.-sponsored summit Thursday that they were serious about combating climate change, but only a few matched their rhetoric with new commitments for reducing emissions, and those who did said little about how they’d meet those targets.

Even as the virtual summit hosted by President Biden accomplished his goal of restoring the United States to a position of global leadership on the issue, it also revealed the limits of his ability to build support for the more aggressive action that experts say is needed.

“It’s an encouraging start,” Biden said during a break in a series of speeches from other nations’ leaders during the first morning of the two-day summit.

The president announced at the outset that he was doubling America’s initial commitment to reduce planet-warming emissions under the 2015 Paris climate agreement, signaling a break from the U.S. abandonment of that pact under former President Trump. Japan and Canada said they would strengthen their goals as well.

However, China and India — Nos. 1 and 3, respectively, in highest carbon emissions — offered nothing new. Neither country announced stronger plans to reduce emissions in the near term, to end their reliance on coal-generated electricity or, in China’s case, to stop financing the construction of coal-fired plants abroad.

Chinese President Xi Jinping emphasized that any international agreements should be centered on “common but differentiated responsibilities,” an often-repeated principle that richer, more developed nations should shoulder more of the burden of fighting climate change after spending decades building their wealth with unchecked emissions.

Australian Prime Minister Scott Morrison avoided making any new promises for his country, despite its role as a major exporter of coal and gas and its worsening problem of extreme wildfires, which, as in California, are believed to be a consequence of global warming. President Jair Bolsonaro of Brazil vowed to end illegal deforestation of the Amazon region by 2030, a pledge that sharply conflicted with the reality of the forest’s destruction under his watch.

Biden’s global climate envoy, Secretary of State John F. Kerry, told White House reporters after the opening day’s session that the administration would use persistent diplomacy to bring along leaders of nations that were lagging behind.

“We will have the ability,” he said, “to be able to create enough progress with other countries that those countries are going to come along, too.”

David Victor, a professor of international relations at UC San Diego, said the summit was a sign of how U.S. leadership had slipped under Trump, who not only withdrew from the Paris agreement but also weakened nearly every major environmental regulation.

“In earlier years,” Victor said, “when the U.S. hosted a novel event like this, there would be more novel announcements.”

He added, “The rest of the world is thrilled that the U.S. is back at work on climate policy, but they don’t really know what to believe coming out of the U.S. these days.”

Biden increased the U.S. target for reducing emissions to between 50% and 52% below 2005 levels by 2030, and told the other leaders, “This is the decisive decade.” His target is a much more aggressive goal than the one that former President Obama set when the Paris climate accord was signed more than five years ago.

“We must get on a path now in order to do that,” Biden said. “If we do, we’ll breathe easier, literally and figuratively.”

He also called on private companies and the financial sector to contribute more to the fight by shifting investments from fossil fuels to cleaner technology.

Fulfilling the U.S. commitment will require sweeping changes in how Americans power their vehicles, homes and factories, but administration officials said little about how the country would get there. The administration did not detail specific policies that they would propose or enact, and many proposals that Biden has made public are facing stiff resistance from Republicans and from industries that would be forced to overhaul their operations.

Parts of Biden’s climate agenda were included in his infrastructure and jobs proposal unveiled late last month. He wants all electricity in the U.S. to come from carbon-free sources by 2035. Roughly half of the country’s power currently comes from sources that don’t generate greenhouse gases. He also proposed funding for 500,000 vehicle-charging stations by 2030. Currently less than 1% of vehicles on the road are powered by electricity.

Although a United Nations conference on climate change is scheduled for the end of the year in Scotland, Biden’s summit was conducted virtually because of the pandemic. The arrangement eliminated the need for arranging travel and accommodations for more than three dozen of the world’s most powerful people, and their entourages, but it also presented some unique challenges.

Time differences limited the schedule so that no one was speaking in the middle of the night. When Vice President Kamala Harris and Biden opened the summit, their words echoed distractingly in the online video. Other remarks were occasionally interrupted by the sound of someone pressing buttons on a telephone keypad, as if they were trying to join a conference call. A video of French President Emmanuel Macron was cut off prematurely, and the camera shifted abruptly to an unprepared Russian President Vladimir Putin, who slouched in his seat, looking bored.

U.N. Secretary General António Guterres warned that the world faced rising sea levels, hotter temperatures and deadly levels of air pollution if leaders did not resolve to rapidly reduce emissions. “We are at the verge of the abyss,” he said. “We must make sure the next step is in the right direction.”

Although Guterres urged countries to abandon coal, the dirtiest of fossil fuels, only one nation rose to the challenge.

South Korean President Moon Jae-in announced that his country would stop financing the construction of coal-fired power plants overseas, a major declaration from one of the top three funders of coal use globally. A recent report by the independent think tank Carbon Tracker and climate researchers in South Korea found that all of the country’s coal-fired power plants would become unprofitable before the end of their lifetimes and that quickly shifting away from coal would actually save the country money.

The other two nations that have bankrolled coal use abroad, Japan and China, made no such commitments, despite pressure from the Biden administration in the lead-up to the summit — including during Japanese President Yoshihide Suga’s White House visit with Biden last week.

China, the largest consumer of coal in the world, continues to build new coal-fired power plants within its borders and in developing countries that are hungry for energy, whatever the risks. Xi offered vague assurances at the summit that he would move to “strictly control coal-fired generation projects” — but not end them.

“The joint statement released over the weekend,” she said, “signals a new agenda for cooperation as well as China’s potential willingness to raise the ambition of its current climate goals.”

Much like Xi, Biden faces his own domestic imperatives. He pitched his remarks to Americans as well as to his foreign counterparts, promising that fighting climate change would generate new jobs rather than stifle economic opportunity. He called global warming “a moment of peril but also a moment of extraordinary possibilities.”

“Countries that take decisive action now to create the industries of the future,” Biden said, “will be the ones that reap the economic benefits of the clean energy boom that is coming.”

British Prime Minister Boris Johnson made a similar point, in a very different way. “This is not,” he said, “all about some expensive, politically correct green act of bunny-hugging.”