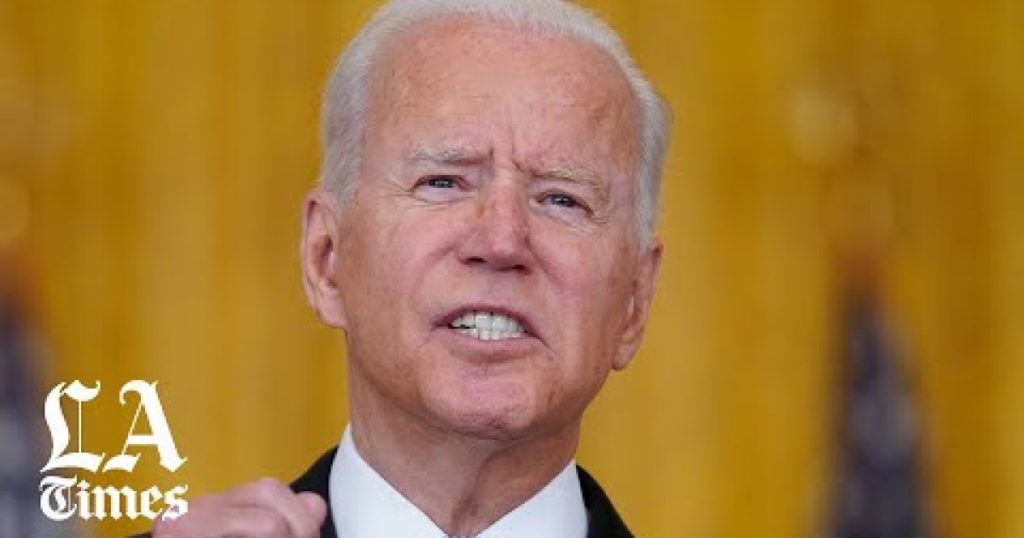 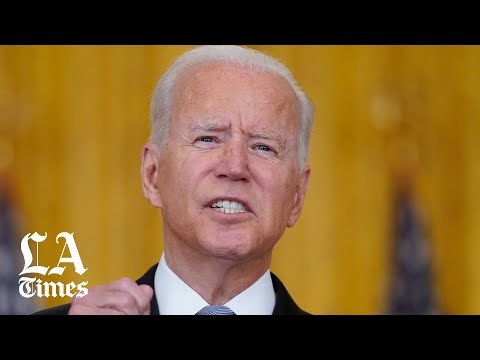 By Monday, events had spun so out of control in Afghanistan that President Biden was forced to cut short a vacation and return to the White House to address a nation about the major diplomatic, humanitarian and political crisis gripping a country where the U.S. has been at war for two decades.

Afghan President Ashraf Ghani had fled the country; the Taliban were holding court in the presidential palace, culminating its quick takeover of a nation of more than 39 million people.

Panic was consuming Kabul, where thousands of people crowded the international airport’s tarmac, and some even desperately clung to jets as they took off.

In his hastily prepared speech, Biden had a lot of ground to cover and much to accomplish. Here are five key takeaways that show how Biden hoped to tamp down a growing political crisis by emphasizing that pulling out of Afghanistan was the right decision, even if the exit appears to be a debacle.

“I am president of the United States of America, and the buck stops with me.”

This is the kind of thing that sounds good when presidents say it. President Truman, after all, famously had a sign to that effect on his desk in the Oval Office.

But if you listen closely to the full 20-minute speech, Biden was much more comfortable in owning the decision to end the war after 20 years — a move that is popular with the American public — than fully accepting any responsibility for what we’ve seen play out over the last few days and weeks. He did not, for example, explain why the execution of the departure turned out so badly.

“The truth is, this did unfold more quickly than we had anticipated. So what’s happened? Afghanistan political leaders gave up and fled the country. The Afghan military collapsed. Sometimes without trying to fight.”

That was the closest thing to a mea culpa you heard from Biden — at least when it came to the chaotic exit — even as he sought to shift blame to Afghan leaders leaving the country and on the Afghan military and government for not putting up a fight.

“I’ve argued for many years that our mission should be narrowly focused on counter-terrorism, not counter-insurgency or nation-building.”

What Biden is saying here is basically that the initial mission in Afghanistan, which came in response to the Sept. 11, 2001, terrorist attacks, evolved beyond rooting out Al Qaeda and its Taliban supporters. The U.S. took out Osama bin Laden, the architect of the attacks, a decade ago. Biden is trying to convey that the U.S. mission in Afghanistan became a half-hearted attempt at nation-building that was not worth the costs or risks any longer. A majority of Americans have agreed with this position.

“American troops cannot and should not be fighting in a war and dying in a war that Afghan forces are not willing to fight for themselves.”

This is another way to emphasize the politically popular position that it’s long past time to bring U.S. troops home from Afghanistan. But the implicit rebuke of Afghanistan’s military and its people generally — at least 66,000 Afghan troops and another 47,000 Afghan civilians were killed in the 20 years of fighting — marked Biden’s most blunt and arguably most callous point.

His hard-edged rhetoric is somewhat out of character from a president who is known for his empathy. But this is the realpolitik of Joe Biden’s foreign policy, and he believes that American public opinion is on his side. The images of what is happening in Kabul are, as Biden said, “gut wrenching” to watch. But Biden believes the U.S. should not be sending troops to die in a country whose leaders and military cannot hold the line after 20 years of U.S. assistance.

“I know there are concerns about why we did not begin evacuating Afghans civilians sooner. Part of the answer, some of the Afghans did not want to leave earlier, still hopeful for their country.”

We began this five takeaways with the president saying the buck stops with him. But here he is taking no responsibility for the failure to foresee the debacle that unfolded, or the lack of planning needed to assist tens of thousands of Afghans who served alongside U.S. forces. Those vulnerable Afghans could face violent retribution from the Taliban if they remain in the country.

Overall, the speech was a defiant one in which Biden sought to portray himself as a resolute commander in chief who was confident in the decision he made about ending U.S. military involvement in Afghanistan. It is not known if the recent images, particularly those from Kabul’s international airport, will affect public opinion in the long term. But Biden is clearly betting that Americans will be grateful the nation has pulled out of the troubled country, no matter how messy and tragic its exit.