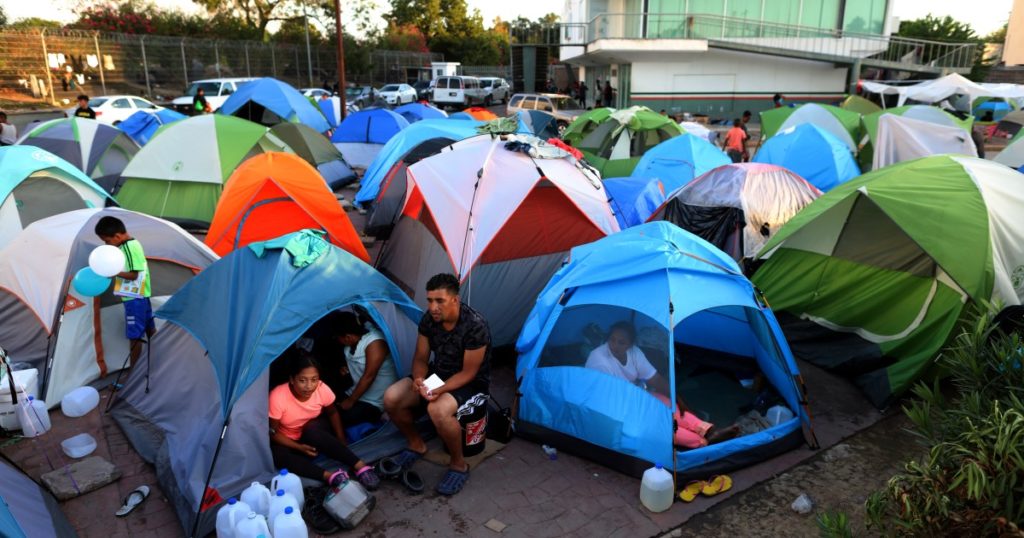 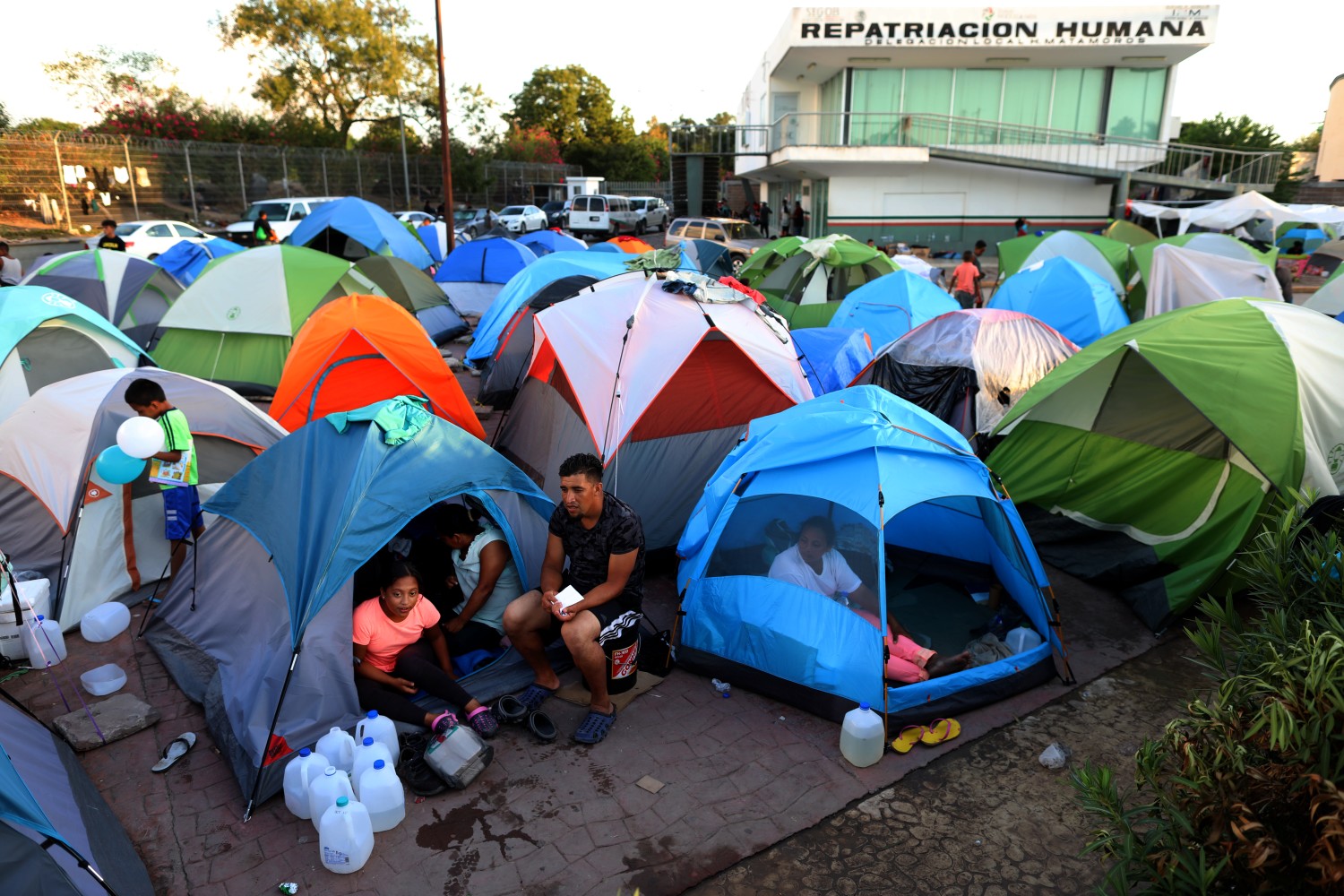 Border officials are set next week to start processing asylum seekers in California and Texas who were forced back across the border under a controversial Trump-era policy that President Biden pledged to end, advocates and officials said Thursday.

U.S. officials will begin next Friday allowing in and processing immigrants at ports of entry in San Ysidro, Calif., and El Paso and Brownsville, Texas, who were subjected to the “Remain in Mexico” policy, shelter directors and United Nations officials told The Times.

Before they are released into the United States, all migrants will first be given a medical screening in Mexico, including coronavirus testing, by the United Nations migration agency. Other U.N. agencies also will help process, shelter and transport migrants in Mexico to ports of entry on the border, working with nongovernmental organizations and shelter networks on both sides, U.N. officials confirmed to The Times.

On Biden’s first day in the White House, the Homeland Security Department announced that the policy, termed the Migrant Protection Protocols, would be paused. But Biden officials so far have left in limbo an estimated 30,000 migrants stuck at the border under President Trump’s interlocking policies to effectively end legal immigration, as they work to identify, review and undo them.

“Finally we now know what’s going to happen with MPP,” said Ruben Garcia, executive director of the nonprofit Annunciation House, which has shelters in Ciudad Juárez and across the border in El Paso.

Garcia said in recent days he has been trying to reassure migrants who have active MPP cases, many of whom have grown frustrated while waiting at shelters in Juárez for the Biden administration to announce its plans.

“There’s still hurdles, but it’s excellent that they’re going to let the families in,” he said, and that migrants joining relatives in the United States can have their asylum cases heard in nearby courts, rather than at the border.

In 2018, Trump administration officials unveiled Remain in Mexico, ultimately pushing upward of 70,000 asylum seekers back to Mexico before the program was essentially frozen last March amid the coronavirus outbreak. Trump officials effectively closed the border, citing COVID-19, and most hearings were indefinitely postponed.

Under the new administration, U.S. officials will begin by processing the roughly 25,000 immigrants under MPP who still have ongoing cases in U.S. immigration courts, prioritizing those who have been waiting longest in some of the world’s most dangerous cities on the other side of the border in Mexico — some for about two years now.

Advocates have recorded at least 1,134 instances of kidnapping, rape and assault against migrants put into MPP.

Chris McGrath, a spokesperson for the U.N. refugee agency, said it is advising both the United States and Mexico on the plans, and will assist “MPP asylum seekers with open immigration cases, to ensure they are aware of the new policy” and can “meet the procedural requirements established by the U.S. government to safely reenter the U.S.”

Mexican officials did not respond to requests for comment.

The Homeland Security Department will provide an online and phone system for migrants in Mexico to put in their case numbers under MPP and receive instructions “on where to appear, and when,” a U.N. refugee official said on condition of anonymity, not authorized to speak publicly on the plans.

“When they hear about this program, some people will move, thinking if they don’t go wherever they need to be they will miss the opportunity,” the official said, adding that they’ll be working to prevent migrants from “jumping to those conclusions.”

Yet thousands of migrants put into MPP have already given up or were ordered removed in absentia for missing hearings, despite notices to appear in court and other cases being riddled with errors, inconsistencies, and misleading information by U.S. officials — or never receiving the notices at all. Federal asylum officers and judges have called the policy illegal and immoral.

It is as yet unclear how Biden officials will address these asylum seekers, or thousands of others waiting at the border for a chance to make their claims.

Officials have said that for now they will keep in place a Trump policy known as Title 42, under which border authorities have turned away hundreds of thousands since March without due process, including unaccompanied children, in the name of public health.

“Our position is that health screenings shouldn’t on their own be a prerequisite to enter the United States,” the U.N. refugee agency official said, adding that the U.S. government had decided to keep them in place for restart to asylum processing for those actively enrolled in MPP.

Garcia stressed that health precautions must be taken by U.S. officials for the migrants’ protection as well.

“We also want to be careful about the intake process so that we do not expose them to picking up the virus,” Garcia said. “Who’s going to be in that room? Are we sure the officers are COVID-free?”

Customs and Border Protection does not test migrants in its custody, instead conducting cursory medical screenings and referring those with symptoms to outside medical providers, officers and agents told The Times. CBP, one of the largest law enforcement organizations in the world, itself has been racked with COVID-19 cases, with 6,778 employees testing positive and 24 dying as a result of the virus.

In recent days, U.S. immigration authorities have separately released several hundred migrants from custody in the United States, raising alarms from some community leaders particularly in South Texas, a region that’s been slammed by COVID-19.

Biden officials said that migrants will only be allowed to enter under “incredibly narrow and limited circumstances,” and continued to stress that they should not come to ports of entry or seek to cross the border.

“This is why we continue to convey that this is not the time to come,” she continued. “The president is committed to putting in place, in partnership with our Department of Homeland Security, a moral and a humane process for processing people at the border, but that capacity is limited right now.”

On Thursday, hundreds of migrants — many with active MPP cases — waited in a fenced tent camp in the Mexican border city of Matamoros, across from Brownsville.

Meanwhile, across the Rio Grande, migrants who arrived at the border and weren’t put into MPP, but instead crossed the river illegally to Texas and got detained by Border Patrol this week, were released to catch buses and flights to join family in other states.

“We’re all kind of in limbo,” said Mark McDonald, assistant project manager at the camp’s clinic, run by nonprofit Global Response Management, who has been fielding questions from migrants about when and how they will be processed.

“We just don’t have the answers,” he said.