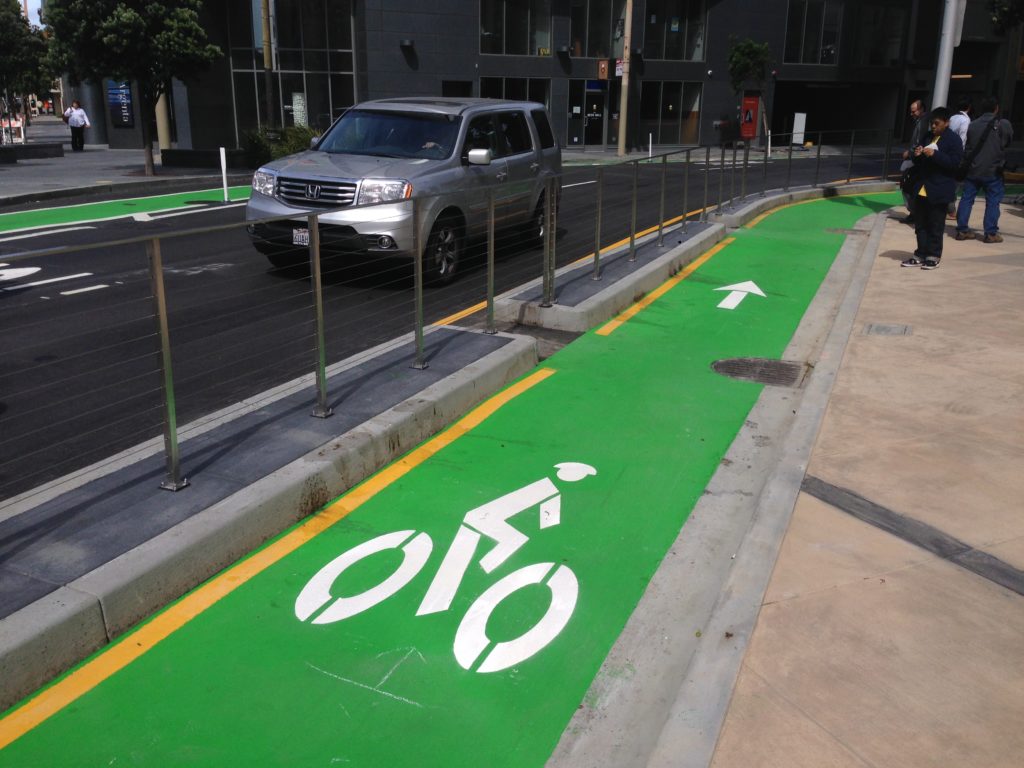 Why would the city build anything less than a fully protected bike facility on any street that’s large enough for a bike lane at this point?

That was the million dollar question asked by “Safe 8th Street” advocate Tim Courtney at a Tuesday evening forum, hosted by Bike East Bay, about the A’s ballpark proposal. He was asking why plans for the park and area around it contain buffered bike lanes with no real protection for cyclists.

“Paint isn’t protection,” said Courtney of conventional, painted, unprotected bike lanes. “People park in them and speed around in them; they’re not really safety improvements. Why are they even on the table anymore?”

Courtney is right–it just shouldn’t be this way in 2021. As previously reported, the city of Cambridge, Massachusetts passed a ground-breaking “Cycling Safety Ordinance” two years ago. It integrated the requirement, now enshrined in the city’s municipal code, to install “a Permanent Separated Bicycle Lane” whenever streets are reconstructed.

“The ordinance, which passed 7-0…will bind the city to provide protected bike infrastructure for streets that are included in its bike master plan except in ‘rare’ circumstances, which city officials will be required to justify,” reported Streetsblog USA in 2019. “The ordinance requires that vertical physical barriers be included.”

That means Cambridge is installing more and more bike infrastructure that looks like this:

I took a roll down the Western Ave curb-separated bike lane on my way to the VZ mtg this afternoon.
Dreamy.
1/2 pic.twitter.com/abqWtKMWXF

Meanwhile Oakland (in this case courtesy of Alameda County and Caltrans) and many other parts of the Bay Area are still cutting ribbons on new bike lanes that look like this:

“An ordinance is always the first resort of advocates when you don’t have a sufficiently cooperative agency,” said Dave Snyder of the California Bicycle Coalition, in an email to Streetsblog. Of course, watered-down attempts have been made before to legislate safer streets–notably SB 127, which the governor vetoed in 2019. Snyder added that he’d doesn’t think an ordinance is the only way to get the job done. “Better than an ordinance mandating protected bike lanes would be an agency that always builds the appropriate infrastructure.”

But, as recent experience with the ballpark plans underscored, that’s not happening in the Bay Area. Dave Campbell of Bike East Bay told Courtney that the A’s plans still have buffered lanes with no physical protection because the city is still figuring out how to build bike lanes and because neighborhoods aren’t always ready to accept protected lanes. “We are aware of Cambridge’s approach and of course it sounds great and is a good starting point, but the challenge is always in the details,” Campbell wrote in an email to Streetsblog. “I have bike plans, unanimously approved by City Councils, calling for protected bikeways on streets, and staff and the community still treat it as an open question as to what is the preferred bikeway. Ugh!”

Ugh indeed. As Courtney told Streetsblog via email, that’s why a new ordinance is needed: to “pre-empt the public consultation process that kills safe streets.” In other words, protected bike lanes and intersections have to become the default.

Imagine if it took a “public consultation process” before EMTs could administer CPR to a dying cyclist or pedestrian, freshly mashed by a errant motorist; why should we have a public process when deciding whether or not to install protected bike lanes and intersections that are proven to prevent collisions and save lives? It should be obvious that crucial, life-saving safety features can’t be optional. And it’s long overdue for Bay Area lawmakers to follow Cambridge’s example and start authoring and pushing both city ordinances and new state bills to make protected, high-quality bike lanes and intersections a requirement for reconstructing streets everywhere.