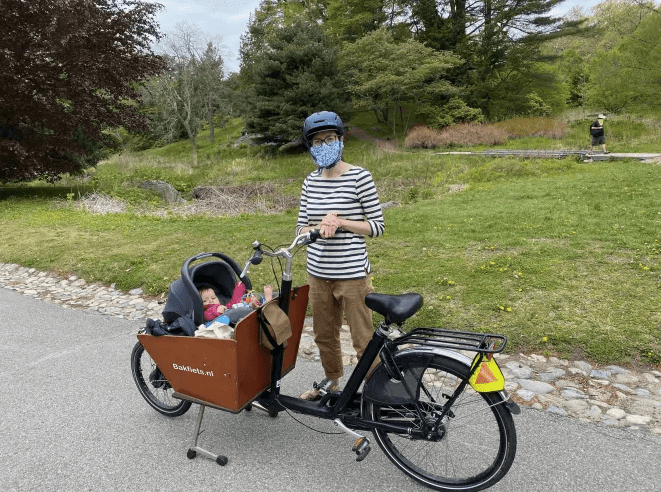 Clean Cars For All is a California program that offers incentives to low-income people to surrender their older, polluting vehicles by helping them buy a clean electric vehicle. Transit passes were added as a “mobility option,” as well, and with S.B. 400 in 2019, so were e-bikes and bike-share memberships.

So far, only the San Francisco Bay Area has gotten its e-bike incentives rolling out. A few applications were accepted in late 2020, to test the program, and in January the Bay Area Air Quality Management District began accepting applications for real.

The e-bike grants are for $7,500 and can be put towards one or more e-bikes plus necessary bike accessories, with any remainder used for transit passes in the Bay Area’s pilot program. Participants have to qualify by both income (at or below 400 percent of the current Federal Poverty Level) and residence (they must live within a zip code that has been defined as a Disadvantaged Community). See here for specifics on who qualifies.

The vehicle to be exchanged for these grants must be fifteen or more years old, functioning, and currently registered to the applicant for at least two years. These vehicles will be scrapped.

Four regions are working on plans to incorporate e-bikes into the program. The San Joaquin and Sacramento regions have not responded yet to questions about progress on their programs. The South Coast AQMD’s program, called Replace Your Ride, has not yet finalized its plan for e-bike grants, but according to program manager Tom Lee, will likely model their plan on the Bay Area’s.

That plan will first need to be approved by the California Air Resources Program. But also first, the program needs funding. Replace Your Ride has stopped accepting applications for the time being for any part of the program because its funding is depleted.

They have not yet decided how much of the funding, when it comes, will be set aside for e-bikes and how much for replacement e-vehicles. That decision might depend on how much interest they get. Because they already have a wait list for cars, they know already there is demand for those incentives, but the demand for e-bikes is less certain.

Replacing a car with an e-bike involves some level of life style change, and also requires that there be safe routes for people, particularly families, to use these bikes on. That means more and better cycling infrastructure is needed, pretty much everywhere in the state.

Tom Lent of the 1000 MPG Project has created a guide to help people figure out what kind of e-bike best suits their needs (which is useful for anyone contemplating making an e-bike purchase, not just program participants).

Clean Cars For All receives its funding from California’s cap-and-trade program, which has seen revenue fluctuate over the last several years. The programs are popular and tend to quickly run out of funds.

The Air Resources Board approved $3 million in funding for the program in December, and Governor Newsom’s proposed budget for 2021 includes $150 million for the Clean Cars 4 All program. Most of the attention on this and similar budget proposals has been focused on electric cars and charging infrastructure to “help with the transition to clean vehicles” but e-bikes are included as well.

The California Bicycle Coalition has some thoughts about some other ways to get financial help to buy an e-bike.