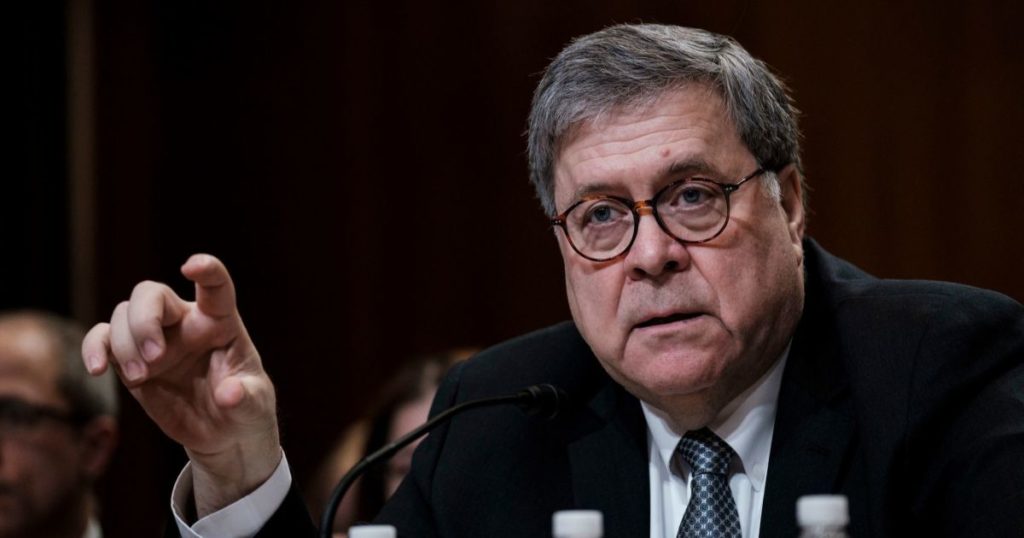 U.S. Atty. Gen. William Barr, one of President Trump’s staunchest allies, is resigning amid lingering tension with the president over the president’s baseless claims of election fraud and the investigation into President-elect Joe Biden’s son.

Barr went to the White House on Monday, where Trump said he submitted his letter of resignation. “As per letter, Bill will be leaving just before Christmas to spend the holidays with his family,” Trump tweeted — just minutes after the electoral college certified Biden as the winner of the November election.

Trump has publicly expressed his anger about Barr’s statement to the Associated Press earlier this month that the Justice Department had found no widespread election fraud that would change the outcome of the election. Trump has also been angry that the Justice Department did not publicly announce it was investigating Hunter Biden ahead of the election, despite department policy against such a pronouncement.

Trump, who seemed placated somewhat by Barr’s highly effusive resignation letter, glossed over his recent frustrations to present a more amicable picture than the recent reality of the increasingly frayed relationship. “Our relationship has been a very good one, he has done an outstanding job!,” Trump said in the tweet, also noting that Deputy Atty. Gen. Jeff Rosen, whom he labeled “an outstanding person,” will become acting attorney general.

Barr recently said in an interview with the Associated Press that the Justice Department and FBI had not uncovered evidence of widespread voter fraud despite looking into the allegations. “To date, we have not seen fraud on a scale that could have affected a different outcome in the election,” Barr told the wire service.

Democrat Joe Biden beat Trump in the electoral college 306 to 232 and so far has a national popular vote lead by more than 6 million votes. Trump has refused to concede and made repeated baseless claims that Biden stole the election through fraud in at last five swing states.

Barr’s comments were among the strongest yet by a Republican refuting the president’s claims. His criticism carried added heft because the attorney general has long been seen as one of Trump’s most ardent defenders in public and is respected by Republicans in Congress.

Republican officials in swing states have drawn the president’s ire on social media when they pushed back against his unfounded claims.

For weeks Barr had expressed frustration to advisors about the attacks on the integrity of the election system by Trump and his allies, telling one they were outlandish and nutty. He was particularly irked when they pushed him to launch investigations on the thinest of reeds.

“There’s a growing tendency to use the criminal justice system as sort of a default fix-all, and people don’t like something they want the Department of Justice to come in and ‘investigate,’” Barr said. “Most claims of fraud are very particularized to a particular set of circumstances or actors or conduct. They are not systemic allegations and. And those have been run down; they are being run down … Some have been broad and potentially cover a few thousand votes. They have been followed up on.”

Though known as one of Trump’s chief defenders, Barr had pushed back at times, making clear he was irked by Trump’s repeated public criticism of ongoing cases, prosecutors, jurors, FBI agents and federal judges. In February, Barr complained that Trump’s tweets were making his job “impossible” and vowed he would not be “bullied.”

Barr told associates at the time that he had considered resigning. He didn’t, fearing it would throw the department and administration into turmoil. And Trump ignored Barr’s concerns, continuing to fire off criticism of court cases and legal issues.

Barr, who also had served as attorney general under President George H.W. Bush from 1991 to 1993, returned to lead the Justice Department in February 2019 after Trump forced Jeff Sessions to resign, saying he wanted an attorney general who would do more to protect him.

He found a defender in Barr, respected member of the Republican legal establishment and a vocal advocate for expansive executive powers.

Weeks after taking the job, Barr came under fire when special counsel Robert S. Mueller III completed his report on Russia’s interference in the 2016 presidential election, and Barr sought to summarize it for the public.

Democrats and former prosecutors charged that Barr’s comments, weeks before the report was declassified and released, mischaracterized its findings by suggesting it exonerated the president. Mueller was more nuanced, writing: “While this report does not conclude that the president committed a crime, it also does not exonerate him.”

Barr also supervised the Justice Department’s legal fight to block congressional access to witnesses and documents in several inquiries, including the House impeachment proceedings. And he oversaw the department’s efforts to thwart congressional Democrats and New York prosecutors from obtaining Trump’s tax returns.

In helping Trump pursue his domestic agenda, Barr launched, though later dropped, an antitrust investigation into four major automakers that had reached a deal with California to clamp down on vehicle pollution.

He backed Trump’s tough immigration plans and limited the ways immigrants can fight deportation. And he chastised local progressive prosecutors for being soft on crime.

In December, Barr publicly disagreed with a report by the Justice Department’s internal watchdog, who found that the FBI was legally justified in launching its investigation into potential ties between Trump associates and his 2016 campaign, and that there was no evidence that politics had played a role in its inception.

In response, Barr said the FBI had initiated an investigation “on the thinnest of suspicions that, in my view, were insufficient to justify the steps taken,” adding that evidence “was consistently exculpatory” of the Americans targeted.

He also tapped John Durham, a U.S. attorney in Connecticut, to investigate the origins of the Russia probe, and tracked his work closely.

In September 2019, Barr accompanied Durham to Rome, Italy, in an effort to jar loose foreign intelligence that might be helpful to the prosecutor. Former prosecutors expressed concerns that Barr was pushing Durham to chase right-wing conspiracy theories in the probe.

Barr’s labors pleased the president, according to associates, and the two formed a bond. But their relationship began to show signs of strain in early 2020.

The issue came to a head in February when Trump complained that prosecutors were seeking too stiff a prison term for Roger Stone, a Republican operative and longtime friend of Trump’s who had been convicted of lying to House investigators, obstructing Congress and witness tampering.