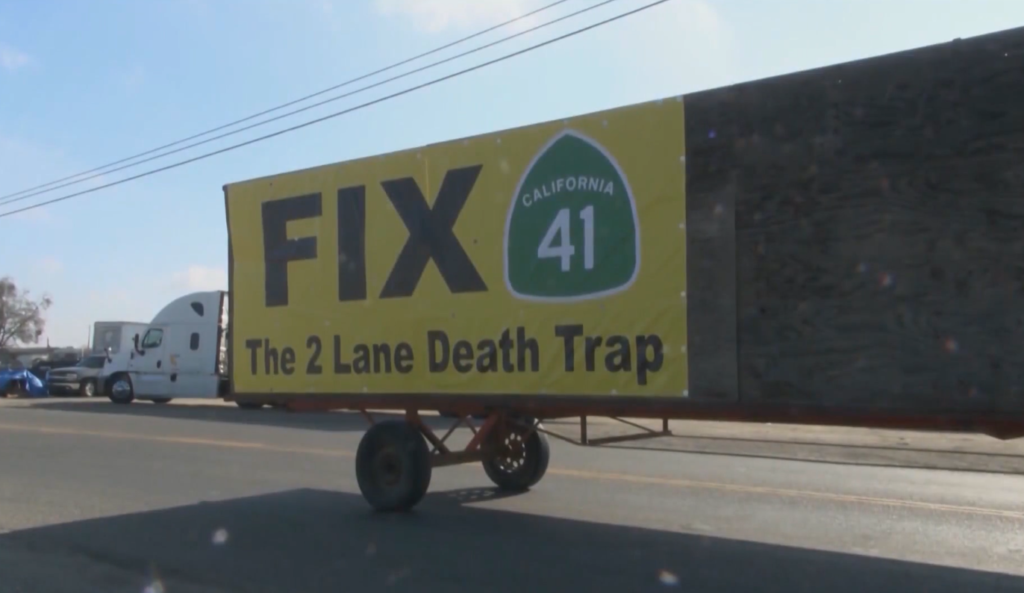 Assemblymember Jim Patterson (R-Fresno) had what may have looked to him like a good week last week. He got some excited press coverage when he accused state leaders of refusing to help Fresno get funding for a highway-widening project that had been in the planning for years. Then he called the press back to tell them that he had convinced the head of the California State Transportation Agency to change his mind and send a letter in support of the project, after all.

But that’s not what happened.

U.S. Congressman David Valadao (R-Hanford) recently sent a request to the federal government for money to expand Highway 41 from two lanes to four on a six-mile stretch south of Fresno. There have been several fatal crashes there, when drivers have crossed over the center line to pass vehicles going slower than they want.

To some, there is only one solution to this safety problem, which is to widen the highway. But not everyone has agreed that it’s been important enough to fund. Not even from local sources – although FresnoCOG will vote this week on whether to allocate the project money from the local transportation sales tax revenue, ahead of other priorities already on the list.

Thus the request for federal funding from Congressman Valadao’s office.

According to the San Joaquin Valley Sun, Assemblymember Patterson “said that local transportation and government officials were troubled by a refusal of Newsom transportation officials to sign a letter of support for a request of $20 million in Federal funding.”

Patterson said that the California State Transportation Agency and its secretary, David Kim, refused to write a letter “due to a belief that the addition of two lanes was a [sic] ‘increase in capacity.’”

That led to several comments from Patterson and other local officials that demonstrated the pretzel logic that is beginning to underpin many arguments over highway funding across the nation.

“This stretch of 41 is not a capacity-building project. It is a gap closure. It is a critical safety project,” from Patterson.

Also: “This is an incomplete gap where the state has already determined the capacity.”

And: “I didn’t know capacity was a four-letter word,” from Fresno County Supervisor Buddy Mendes.

They also complained that Highway 41 had “always” been planned to be wider than it was originally built.

But CalSTA, and its secretary, do not write “letters of support” for projects like this – as a matter of course. Such a letter would be up to Caltrans, which oversees state highway projects. And Toks Omishakin, the director of Caltrans, had provided a letter, which was included in the packet Valadao provided to the federal government as evidence of the need for funding.

However, calling it a letter “of support” is a bit strong; the letter says that Caltrans has finished all the planning on the project and is ready to begin work as soon as funding is found for it.

That is, Caltrans recognizes that it’s a local project with local support, but has not committed to help fund it.

There are many such “legacy” projects on the books in California. These are highways that were built with an assumption that one day growing populations would require future expansion, or projects that have otherwise been in the planning stages for decades. See Streetsblog LA’s coverage of the I-605 corridor project through Downey as an example. Just because they’ve been planned for decades, however, doesn’t mean they were ever good or even needed.

Patterson says he plans to “meet with” Secretary Kim in the next few weeks to insist that the Highway 41 project be included in the California Interregional Transportation Improvement Program, which lists priorities for state transportation funding. But political pressure on state officials is not how projects get on that list – that involves an interregional process. Besides, projects in the ITIP must also help meet a number of state goals, including VMT reduction.

Meanwhile, Caltrans has already completed a center striping project to address the safety problems along that stretch of Highway 41. This summer the agency will be installing a barrier in the median that will prevent drivers from crossing over the highway.

In other words, the safety issues can be resolved without widening the highway.

But long-term planning creates its own inertia.

Assemblymember Patterson did get something right, in that California is moving away from the idea that it will keep automatically widening highways and finishing “gaps” in legacy projects. The reasons are many – including state climate policies that call for decreasing, rather than encouraging, car travel. But another reason is that California already has more highway lane miles than it can afford to maintain. That was made very clear in the arguments about raising the gas tax several years ago, despite the surprise some are expressing about this lately. Adding to the high costs of maintaining existing roadways by growing what needs maintenance makes little financial sense.

This shift in state – and federal – priorities must be scary for people who have worked for years and years planning “legacy” projects, always assuming that someday they would get the needed funding and be “completed.” It’s certainly not the first time Patterson has reacted loudly to this issue, and it won’t be the last.

But it’s too bad he can’t get the attention without making stuff up. He has joined the growing group of people who apply a twisted logic to explain away “induced demand” and deny “capacity expansion” when it’s in front of them. L.A. Metro leaders did it just last week, denying that capacity-expanding highway projects are expansion, because they’re just as “modernization,” “operational improvements,” and “gap closures.”

One last thing to note and wonder about: the section of Highway 41 that is proposed for widening isn’t even located in Patterson’s Assembly district. Maybe he should check in with Dr. Joaquin Arambula, who represents that area.