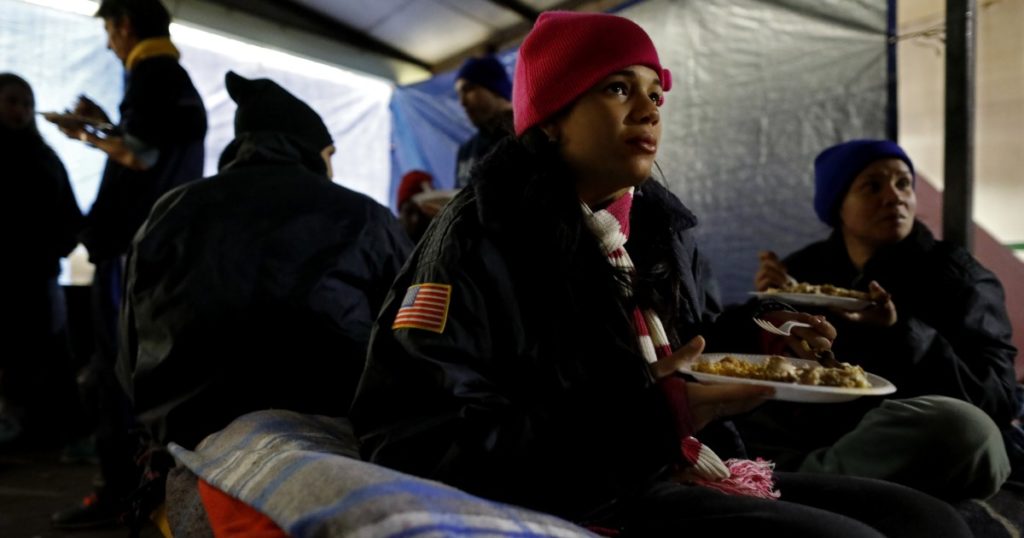 Winners, losers and a lot of uncertain futures collide in this ragged tent camp on the border.

Claudia Quesada Rodriguez, a mother who fled gang violence in El Salvador, is one of the fortunate ones. She became eligible to enter the U.S. this week after President Biden loosened some of the restrictive immigration policies of former President Trump. But another mother, who had fled the same violence and made the same dangerous journey, was still waiting to learn her fate behind the camp’s barbed-wire fence.

Life is punctuated by sudden joy and sharp despair for about 800 migrants at the Matamoros camp. Many of them arrived under Trump’s Migrant Protection Protocols program, known as Remain in Mexico, that forced asylum seekers to wait in Mexico for the outcomes of their U.S. immigration cases. Even as Biden dismantles that policy — an estimated 25,000 asylum seekers with active cases are now eligible to enter the U.S. — hardships remain for others left in limbo.

Some at the camp migrated for economic reasons and don’t have legitimate asylum claims. But others do. And even those like Rodriguez have encountered obstacles: Online registration has been delayed by the frequent crashing of a government webpage, preventing the first group of migrants at the camp from entering the U.S. until Thursday.

Lisseth, 40, who asked to be identified by her first name for fear of death threats she received in El Salvador, doesn’t know when her long ordeal will end. She waits in a camp where she’s seen dead bodies in the nearby river, where fellow migrants have been kidnapped, extorted and raped. Last year, she sent her 13- and 17-year-old children to the nearby border bridge where, as youths, they were allowed to claim asylum and join a cousin in Los Angeles.

Standing in a field outside the camp this week, Lisseth and her husband, Daniel, said they hoped the Biden administration’s new policies would allow them to join their children in the U.S.

“It’s like a lottery,” said Daniel, 47, who worked for the Salvadoran government but fled with his family after being threatened by the MS-13 gang. “We don’t know what’s going to happen.”

The new president is facing increasing pressure as he attempts to undo Trump polices without drawing more migrants to the border and instigating a backlash from Republicans and conservative Democrats in Congress. The administration has reopened two massive shelters for migrant youths in Florida and Texas. Federal agents have caught more than 70,000 migrants at the border each of the last four months, the most for that period in at least a decade.

Border authorities say many are making repeated attempts to cross after being expelled under a policy known as Title 42, which Trump implemented and Biden has upheld in effect to close the border in the name of public health amid the pandemic. At the same time, U.S. Customs and Border Protection has been releasing many migrant families it catches in south Texas while their asylum claims are pending, even as those who have waited years to cross remained in the Matamoros camp this week.

The camp formed at the foot of the border bridge to Brownsville, Texas, three years ago, expanding into a nearby plaza and riverfront park. Volunteers from the U.S. provided migrants with tents and daily meals. At one point, the camp was home to more than 3,500, a glaring symbol of Trump immigration policies such as family separation, metering and Remain in Mexico that had blocked migrants from legally claiming asylum, many from Central America.

Members of Congress visited the camp in 2019 after a 25-year-old Salvadoran man and his 23-month-old daughter died trying to cross the Rio Grande, where migrants erected white crosses in their memory. Months later, Julián Castro, campaigning for the Democratic presidential nomination, visited the camp in an unsuccessful attempt to help a group of LGBTQ migrants claim asylum. Pro bono lawyers have held sessions at the camp to educate migrants about their rights.

Most politicians vanished from the camp during the pandemic. So did the crosses. The tent courts put up by the Trump administration on the U.S. side closed, along with immigration courts nationwide, postponing asylum seekers’ court dates. Fears of COVID-19 and increased cartel shootings kept volunteers and lawyers away. Some migrants returned to their home countries. Others crossed the river illegally.

Those still waiting in Matamoros this week put their faith in Biden, especially after he highlighted the camp during a presidential debate last fall, noting migrants were “sitting in squalor on the other side of the river.” They remember that Jill Biden visited the camp in December and encouraged them.

Perla Vargas said she met the first lady and told her why she fled political persecution in Nicaragua with her daughter and granddaughters. “She said don’t worry, you will be with your family soon,” said Vargas, 46, as she worked at a camp clinic this week.

Vargas’ immigration case is active and her attorney helped her register online. Those who registered began entering through San Ysidro, Calif., last week. In Matamoros, entry was delayed as migrants huddled in their tents and the worst winter storm in a generation coated the area with ice.

This week, the United Nations erected tents at the camp where eligible asylum seekers will be tested for the coronavirus before being allowed to enter the U.S. Mexican soldiers patrolled the camp’s perimeter. U.S. immigration officials released a statement saying, “New arrivals to the Matamoros camp will not gain entry into the United States through this limited process.” But migrants sneaked into the camp anyway, hoping to blend with the crowd.

It wasn’t clear what would become of migrants like Lisseth, who were turned away by immigration judges using more restrictive standards issued by the Trump administration to reject asylum claims by victims of domestic and gang violence.

Officials from the Department of Homeland Security and the United Nations have said they will prioritize asylum seekers at the camp. The U.N. agency for refugees, UNICEF and other agencies created a website for eligible asylum seekers to register, but it’s been plagued by technical problems. Although 12,000 migrants have registered online, only 27 were allowed across the border from Matamoros on Thursday, according to the U.N.’s International Organization for Migration.

Quesada, the 37-year-old mother from El Salvador, who doesn’t have an attorney, managed to register online late Wednesday, and was told that once she and her 13-year-old daughter, Maria Jose, test negative for the coronavirus they will be allowed to cross to join a Salvadoran friend in Charlotte, N.C. Their immigration case had been delayed for months when they were turned away from the tent court last year because Maria Jose was sick.

“Some had their cases rejected,” she said. “There are some people who went back to their home countries and got killed.”

Lisseth and her husband, who also don’t have an attorney, had their asylum claim rejected after failing to appear before an immigration court in November. They said they were not notified of the hearing.

“How is it possible when we have waited a year and a half to do it the right way?” Lisseth said. “There’s nothing concrete about what will happen to us.”

She worries that Mexican officials will close the camp before she is allowed to enter the U.S. At the start of the pandemic, Mexico shifted tents from the plaza to the park, erected barbed-wire fences and stationed guards at the entrance to check temperatures. They also tried unsuccessfully to relocate migrants to a nearby stadium. In years past, they worked with a U.N.-affiliated agency to bus and fly migrants from the border back to Central America.

“We thought the president would help us,” said Alberto Lopez Reve, 57, a Cuban nurse who sent a letter to Biden this month pleading for help after his asylum case was rejected last year. He wrote: “Give a second opportunity to have clean and transparent asylum decisions to the hundreds of immigrants who were unjustly disqualified by an anti-immigrant administration.”

Felicia Rangel-Samponaro, a volunteer who has run a school at the camp since it formed, also fears the Mexican government will try to force migrants to leave Matamoros.

“They don’t want them out here in this encampment — it doesn’t look good for the U.S. or for them,” she said.

Rangel-Samponaro has been encouraged by recent conference calls the Biden administration has held with migrant advocates. She in turn tries to reassure migrants, including Melvin Coronado, who works at her school. Coronado, 22, was denied asylum last year despite half a dozen scars from being shot by gang members before he fled Guatemala with his younger brother, only to be kidnapped in Mexico until his father in the U.S. paid their ransom.

“They’re not the only ones with cases like that, where they almost got killed in their home countries and in Mexico they got kidnapped,” Rangel-Samponaro said. “They all deserve a second chance.”

A gay Cuban asylum seeker in Matamoros who was threatened by local cartels crossed the Rio Grande this month, was caught by Border Patrol and remained in immigration detention this week, friend Rey Rodriguez said.

“He got desperate. There are no clear guidelines right now” for those whose asylum claims were rejected, said Rodriguez, a Cuban asylum seeker among LGBTQ migrants Julián Castro unsuccessfully tried to help cross the border in 2019.

Rodriguez, 37, was allowed by an immigration judge to enter the U.S. last year while his immigration case proceeds and has been working with disabled and homeless LGBTQ youths at a nonprofit in Washington, D.C. He hopes the camp stays open long enough for migrants whose asylum claims were rejected under Trump to get another chance.

“They all were mistrials, they all were unjust,” he said. “But that’s going to take time.”