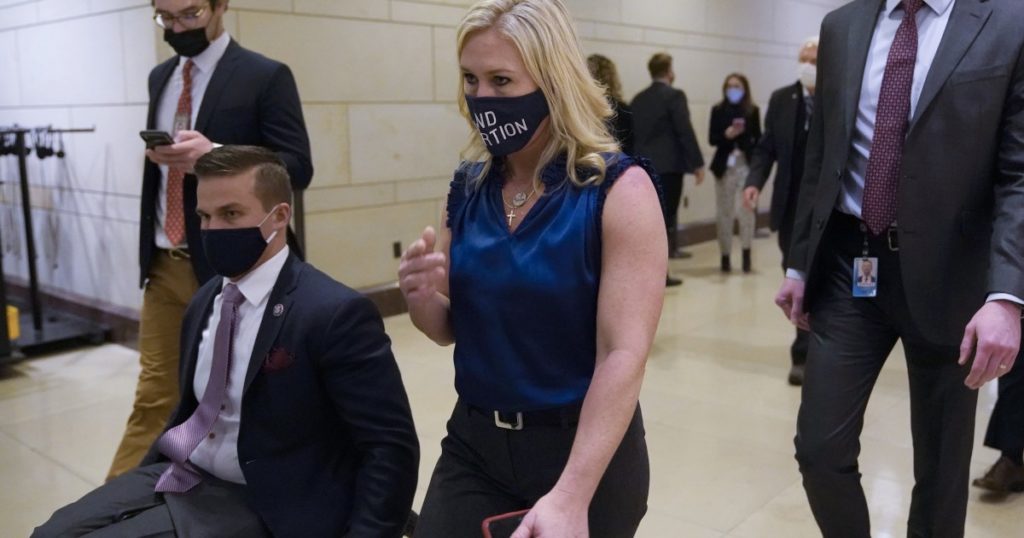 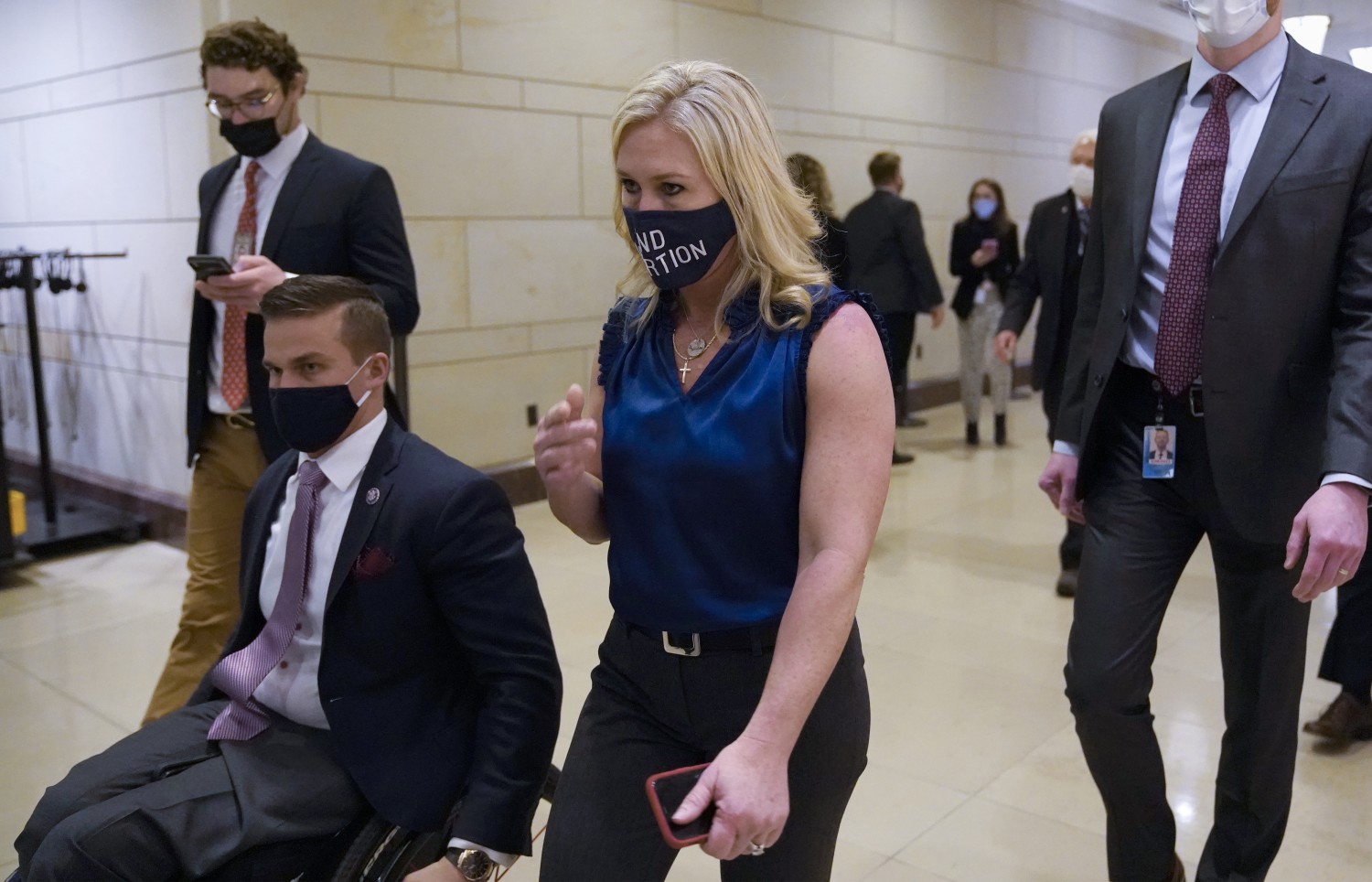 Treasury Secretary Janet L. Yellen made a succinct case for President Biden’s $1.9-trillion coronavirus relief package, asserting Thursday morning in a national television interview that it will be an economic lifeline to families, workers, teachers and healthcare workers.

“This is really an urgent need,” she told ABC News, “and we need to act big.”

Hours later, a freshman Republican congresswoman, Marjorie Taylor Greene of Georgia, drew live cable news coverage as she spoke on the House floor. Ahead of a vote to revoke her committee assignments, she tried to disavow her past statements denying the Sept. 11 terrorist attack and school shootings, as well as attributing California’s forest fires to “space lasers” controlled by Jews. But she made no apology, portraying herself as a victim of a liberal “cancel culture.”

Her combative posture and embrace of conspiracy theories, many of which were advanced by pro-Trump extremists who stormed the U.S. Capitol last month, has put her party in a bind as its leadership wrestles with how to move forward after losing the presidency and Congress.

The striking dichotomy between two parties — one eager to deliver sweeping legislative relief amid a pandemic and economic crisis, the other consumed by debates over conspiracy theories and loyalty to the bombastic former president — has become a defining feature of the Biden administration’s first weeks in office. And it’s providing Biden with a more comfortable honeymoon than new presidents usually enjoy.

“It feels like there’s nothing but open road for Biden right now. Republicans are just circling around the drain,” said Jennifer Palmieri, a Democratic communications strategist and veteran of the Obama administration. “When you see them on television right now, it’s to fight with each other. It seems like they have a lot to sort out before they can have the organizational and the ideological cohesion to be an effective opposition party.”

As the White House and Democrats have focused on making the case for a sweeping response to the pandemic and economic crisis, Republicans have continued to be riven by internal feuds that dominated the Trump presidency, prioritizing intraparty fights and purity tests while mustering only marginal and uncoordinated responses to the administration’s top priority.

Although GOP lawmakers have complained about the size of the American Rescue Plan, they have not mounted a cohesive campaign to hammer away at it, like they did eight years ago in dismissing the Obama administration’s actions as that of “big government” and stirring up fears about a “takeover” of healthcare replete with “death panels,” sowing the seeds of public opposition.

With the party’s populist wing too distracted to attack the president, a small group of policy-focused senators have — at least for now — allowed him to demonstrate an interest in bipartisanship after engaging in substantive policy talks.

Biden “appears to have an agenda that is sharply focused on what most Americans see as the most critical issues facing the country,” said Whit Ayres, a Republican pollster in Washington. He worries that ongoing infighting between the GOP’s populist and more governance-focused elements will continue to hinder efforts to put pressure on the administration.

At the moment, Biden’s plan is broadly popular, something administration aides have pointed to in asserting that it has bipartisan appeal from the public even as support from congressional Republicans remains uncertain. According to a Quinnipiac University poll released Wednesday, 68% of Americans support the massive relief plan. The president also saw his job approval rise to 61% in an Associated Press-NORC survey Thursday.

Some Republicans strategists have expressed frustration over their party’s failure to mount more sustained and focused criticism on the administration’s plan, which they argue would be easy to attack for including too much funding for schools at the behest of teachers unions and a poorly timed minimum-wage hike that would hurt struggling small businesses.

Instead of shooting holes in Biden’s proposal, Republicans have engaged in a circular firing squad. On Wednesday night after Minority Leader Kevin McCarthy (R-Bakersfield) admonished Greene in a private meeting but opted against punishing her himself, he survived another challenge to his authority, presiding over an ultimately unsuccessful vote at a contentious party conference meeting to oust Rep. Liz Cheney (R-Wyo.) from her leadership post. Trump allies sought to jettison her from the party’s No. 3 job in the House because she voted in favor of impeaching the former president for his role in sparking the Jan. 6 mob siege on the Capitol.

Less than 24 hours later, the House voted 230 to 199 to remove Greene from her committee posts, with 11 Republicans breaking with McCarthy and joining Democrats in sending the controversial freshman a message.

“Republicans have been conditioned over the last four years to spend more time fighting each other than to fight actual Democratic policies,” said Rory Cooper, a Republican strategist who is frustrated the party has not mounted more sustained criticism of Biden’s proposal. “President Trump was typically most obsessed with Republicans who were not being subservient enough to him, so there’s still some of that PTSD, forgetting what it’s like to be a minority party and how to oppose a Democratic agenda while offering your own solutions.”

Sen. Josh Hawley (R-Mo.), one of the lawmakers who indulged Trump’s denials of the election results and the bogus claims of voter fraud that incited the mob, has been rewarded with near nightly appearances on Fox News to rage about “cancel culture.” And other Republican lawmakers appearing in prime time have largely eschewed attacking Biden or the coronavirus relief proposal. Instead, they have been heaping familiar criticism on cultural lightning rods such as Democratic Rep. Alexandria Ocasio-Cortez of New York.

“I don’t think many Republicans are accepting of this package, but they’re so consumed with the world they have now created of conspiracy theories and extremist issues, they’re not even in a place where they can focus on their opposition to the president,” said Julian E. Zelizer, whose book, “Burning Down the House,” details the rise of the modern GOP.

Rep. Matt Gaetz (R-Fla.), whose militant loyalty to Trump has earned him a political renown few back-benchers enjoy, left Washington to fly to Wyoming last week to rally opposition against Cheney. Despite the failure of the effort to oust her, Gaetz and Rep. Jim Jordan (R-Ohio) stand to reap rewards for pressing the case: TV invites, Twitter followers and online contributions from the president’s base.

“The incentive structure is all wrong for members to push ahead an actual conservative agenda, and that’s not changing,” said Cooper, the GOP strategist. “And we’re now electing members of Congress who fit into the awful incentive structure rather than members who can change it. That’s why we have Marjorie Taylor Greene.”

On the whole, however, what’s good for individual GOP lawmakers in safe districts may be taking a toll on the party. Just 26% of the country approved of congressional Republicans, while 64% disapproved, according to the Quinnipiac poll this week.

As factionalism has roiled the House GOP conference, a group of 10 moderate Republican senators has engaged the White House in policy discussions, seeking areas of potential compromise as the legislative process begins.

They left an Oval Office meeting with Biden on Monday expressing optimism about future talks, avoiding criticism even as the administration emphasized the president wasn’t budging on Republicans’ requests to scale down the size of the package.

On Thursday, one of them, Sen. Mitt Romney (R-Utah), offered a revision to an element of the administration’s bill, a proposed child tax credit. White House Chief of Staff Ron Klain responded by tweeting that he was “really looking forward to see what @SenatorRomney will propose here,” calling the outreach “an encouraging sign that bipartisan action to reduce child poverty IS possible.”

Although that potential development was overshadowed by the House vote to strip Greene of her committee assignments, the bipartisan talks may be as beneficial to Biden as the more strident voices on the right focusing their ire elsewhere.

“The ability to post up against the more extreme [Republican] voices is helpful. But what’s most helpful for Biden is that he has gone beyond the optics of bipartisanship and has actually had meetings with the 10 Republicans and is continuing to have open communications,” said Kevin Madden, a communications consultant and former spokesman for the GOP House Majority.

“He’s put into practice the promise of bipartisanship for the time being. That’s what’s helping him the most.”