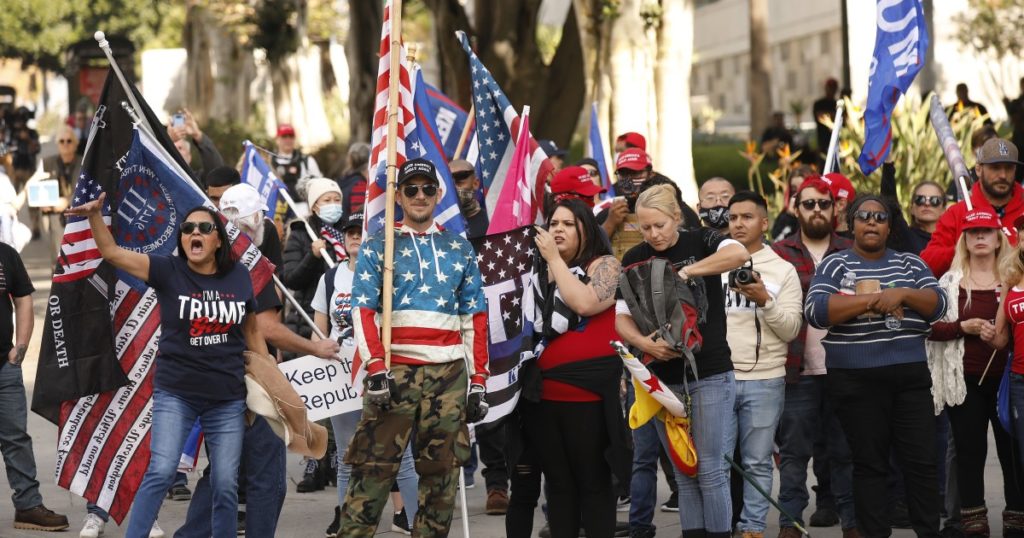 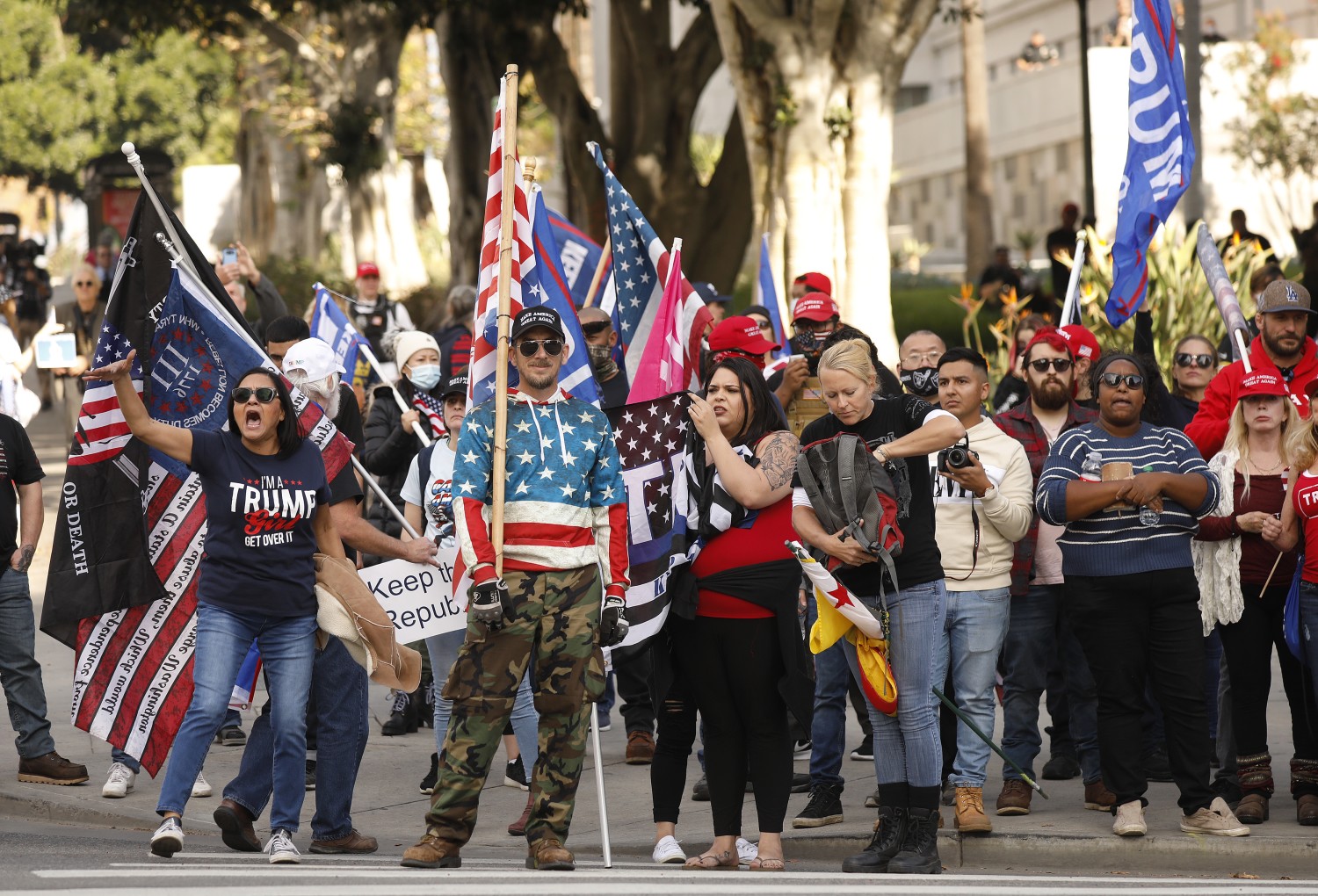 As a violent mob stormed the U.S. Capitol on Wednesday in support of President Trump’s efforts to overturn the 2020 election, several people were arrested in downtown Los Angeles as Trump supporters clashed with counter-protesters and police.

A crowd of about 200 gathered near Los Angeles Police Department headquarters, waving U.S. flags and chanting, “Do your job,” as officers tried to control them. Police declared the gathering an unlawful assembly about 1 p.m.

One Trump supporter screamed at officers who escorted her off the steps of City Hall, yelling, “Remember there are thousands upon thousands of patriots willing to die for our freedoms. … You need to decide which side you’re on.”

Capt. Stacy Spell, an LAPD spokesman, said there were no serious injuries, although images on social media showed some with blood on their faces and clothes. Spell said there were only a handful of arrests downtown, all related to fights between Trump supporters and counter-protesters on Spring Street near LAPD headquarters.

The department specified later Wednesday that six people had been arrested — three for carrying unpermitted items at a public demonstration, two for failing to disperse and one for resisting or obstructing an officer.

The demonstration began about 9 a.m. and remained relatively peaceful, until an exchange led one of the groups to use pepper spray on the other. Spell did not specify which group incited that incident, but a Times reporter saw someone spray something in the eyes of several Trump supporters around 12:30 p.m.

For the next two hours, the two groups exchanged insults and profanities, with many Trump supporters holding Blue Lives Matter flags and signs claiming either that the election was stolen or that the COVID-19 pandemic was a hoax. Few wore masks, and many cursed at reporters who approached them.

At one point, pro-Trump demonstrators engaged in fistfights with the group that had come to oppose them. Two of the president’s supporters were led away, bloodied and in handcuffs, as officers moved in and used batons to push other members of the crowd back on Spring Street.

Police issued a number of dispersal orders, first telling the Trump supporters to leave the corner near City Hall’s lawn around 12:30 p.m. Although some group members peeled off, announcing they would reassemble in Beverly Hills later in the day, about 100 remained. The LAPD made no move to arrest them.

Later, after fights broke out on Spring Street, police moved to separate the two sides and announced that anyone left standing on the corner of 1st and Spring streets needed to disperse or face arrest. Only counter-protesters remained on that side of the street.

Spell later clarified that the unlawful assembly order was intended for the entire area, but police were mostly hoping to defuse the situation without arrests.

“We’ve had a number of dispersal orders, and the idea is right now, we’re trying to give people enough time and enough specific direction that they can take advantage of that,” he said.

The LAPD was not aware of any other planned demonstrations Wednesday, Spell said.

In Beverly Hills, about 50 people gathered at Canon Drive and Santa Monica Boulevard, barraging motorists idling in luxury cars at the intersection with megaphone-amplified theories that COVID-19 was a concept invented to achieve totalitarian control, unfounded accusations of voter fraud and predictions that Trump would remain in office for another four years.

Some drivers laid on their horns in support, while others rolled down their windows to express their disgust, prompting fiery jawing matches with Trump supporters on the sidewalks.

“Stop the steal!” one woman repeated as she crossed back and forth across Santa Monica Boulevard, holding a large sign above her head that read, “End the Lockdown, Take Off Face Diaper.”

Beverly Hills Police Chief Dominick Rivetti said the demonstration started about 3 p.m. and remained peaceful until a fight broke out at 5:30 p.m., prompting police to declare an unlawful assembly and briefly close the westbound lanes of Santa Monica Boulevard. The crowd broke up “in a peaceful manner,” Rivetti said in a video posted to Twitter.

In Washington, Trump vowed to “never concede,” leading to an extraordinary, violent protest of the final ratification by Congress of Joe Biden’s electoral college victory, claiming that the peaceful transfer of power in 14 days amounts to “the country being destroyed.”

The Metropolitan Police Department confirmed a woman who was shot after storming the U.S. Capitol Building died of her injuries at a hospital.

The Republican leader of the California Senate posted, then quickly deleted, a tweet accusing the mob that overran the U.S. Capitol in Washington of belonging to the leftist anti-fascist group known as antifa and not being supporters of President Trump.

State Sen. Shannon Grove (R-Bakersfield) added a comment to a tweet first posted by Lin Wood, a Georgia attorney who has filed unsuccessful lawsuits in support of Trump’s effort to overturn election results in several key states. Wood’s tweet included photos he alleged without proof were of an antifa member present in the Capitol hallways.

“Patriots don’t act like this!!!” Grove wrote in the retweet of Wood’s posting. “This was Antifa.”

A representative for the Senate Republican Caucus said Grove deleted the original tweet after realizing it was “incomplete.” The revised tweet, posted later in the afternoon, said that the violence in Washington was the “way Antifa behaves” and called the mob’s actions “unacceptable and unAmerican.”

L.A. Mayor Eric Garcetti tweeted that “President Trump must condemn what has happened today, stop illegally contesting the will of the American public, and support the institutions and elected leaders who comprise our democracy.”

“Since we’re kind of one of the more vocal focuses of the protests and free speech activities in Southern California, we’re constantly watching what’s going on and adjusting our staffing,” Smith said. “It’s kind of a very fluid thing that we keep an eye on regularly.”

A student journalist at Emerson College, 19-year-old Bailey Allen, said she decided Tuesday night to keep a close watch on her Newport Beach neighborhood. When she saw people storming the U.S. Capitol on TV news Wednesday morning, she jumped into her car and drove north, headed for Huntington Beach.

She was greeted by the sound of “God Bless the U.S.A.” blasting over loudspeakers, she said, then the sight of people waving Trump flags and signs saying, “Stop the steal.”

“Hopefully, someday we can all be more united as a country,” Allen said. “I’m rooting for the unity.”

By 2 p.m., most of the demonstrators had dispersed, Smith said, though some lingered in downtown Huntington Beach and Newport Beach.

In Sacramento, Gov. Gavin Newsom canceled a scheduled briefing on the latest coronavirus news in the state amid the unrest.

“Peaceful protest is an important mechanism of our democracy but what we are witnessing in our nation’s Capitol building is reprehensible and an outright assault to our democracy and Democratic institutions,” Newsom said in a statement.

The California Capitol remained mostly peaceful Wednesday with a few hundred Trump supporters gathering under the watchful eye of battalions of peace officers and two circling helicopters. Though police reported some arrests and skirmishes, the event was largely without violence.

By 1 p.m., shortly after reports of gunshots inside the nation’s Capitol, most Trump supporters began to leave as speakers on a flatbed truck serving as the stage blared Buffalo Springfield’s protest song “For What It’s Worth” about the perils of paranoia.

Those in attendance mostly condemned the violence in Washington.

But like most who had come bearing flags and Trump 2020 signs, she maintained the debunked theory that Trump had been the victim of election fraud and called the day a pivotal moment in American history.

“If [Trump] goes down, we all go down and the rest of the free world goes down,” Fraim said. “We are decaying into a banana republic.”

While fears of a stolen election were the focus of the rally, signature gatherers for a Newsom recall effort worked the crowd with success.

Katie Flutie, who was staffing a tent for the recall effort, said she had gathered more than 200 signatures in a matter of hours, and had many other people tell her they had signed previously. She said that removing Newsom from office was her main goal — and her main reason for attendance — but said, “I also support Trump, stop the steal and all that.”