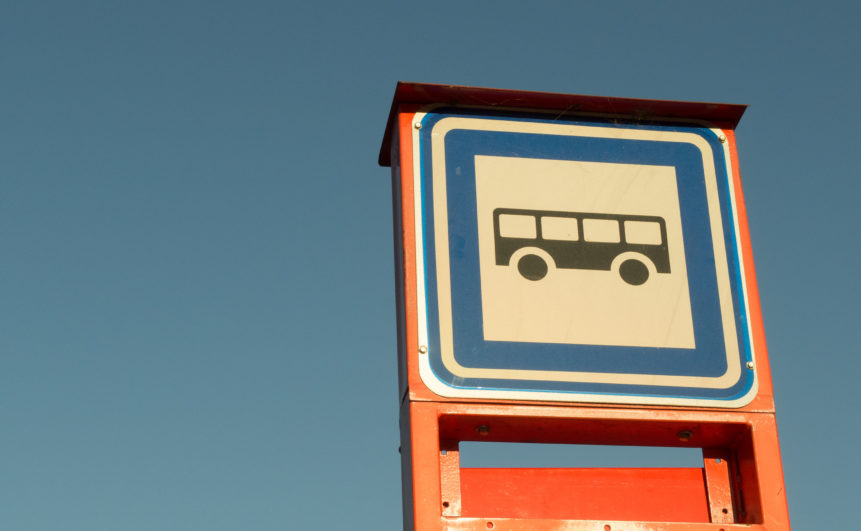 North America has a new l’arrêt d’autobus le plus désolant.

After a hard-fought battle against its final rival in Staten Island, Québec City has claimed the infamous title of Sorriest Bus Stop in North America, besting (worsting?) its 15 fellow competitors and over a hundred nominations from across the continent. And this isn’t the first time a Canadian waiting area has claimed the crown; in 2018, a highway-side stop in Vancouver won the whole shebang, proving that just like in the U.S., bad transit facilities are truly a phenomenon from coast to coast.

But the victory of la Métropole is the first time a non-anglophone city has claimed the top spot, forcing the Streetsblog staff to dig deep to remember the last vestiges of their middle school French. And it’s definitely the first stop to feature an inflatable tube man, in addition to a sidewalk-free road that becomes completely impassable any time it snows. (No word on whether any Canadians have learned any sweet moves while dodging the backdraft from passing semi-trucks.)

But what really makes the Car Dealership Catastrophe special is its origin story.

Self-described “diehard” Streetsblog fan and urban planner in training, Hoffman, actually nominated several stops for the title, after a lunchtime tour of his city’s not-so-great waiting areas with his wife, Jackie, who is a business analyst and party leader for Transition Québec. But though Jackie’s picture would end up being featured on Streetsblog half a dozen times throughout this contest, she admits she was a little skeptical at first.

“I’m running for mayor this year, so I was hesitant to be linked to a contest that could shed Québec City in a negative light on an international scale,” wrote Jackie in an email. “I know that the people at [local transit agency Le Réseau de Transport de la Capitale (RTC)] do the best that they can with the resources that they have. I am running for office precisely because I want to finance all the infrastructure around active and public transportation. The last thing I want to do is make life more difficult for the folks at the RTC.”

But Jackie ultimately decided — and we couldn’t agree more — that the spirit of the Sorriest Bus Stops contest isn’t really about shaming any particular transit agency or city governments for their failures. It’s about prompting a conversation about why our entire transportation culture collectively accepts bad bus stops as inevitable, rather than treating them as a problem that can and must be fixed through increased transit funding, strong interdepartmental collaboration, and deep engagement with the communities that use these facilities.

Because if we don’t, a sorry stop can quickly become a public monument to how little public transit riders matter.

“Many citizens say that they don’t take the bus, but they definitely notice the poorly thought-out bus stops in the more residential areas of Québec City,” Jackie added. “The fact that so many people are aware of the problem and there are so many sorry stops makes me feel a bit concerned that there is a vicious cycle. Drivers may hate traffic, but when they pass sad bus stop after sad bus stop, they think to themselves, ‘I’m stuck in traffic, but at least I’m warm, safe and not standing on a highway on-ramp in a snowbank.’ It reinforces their choice to take their car. I think that this competition has made people realize that the status quo is not normal and we can do better.”

Both Jackie and Hoffman note that, despite how this particular bad stop might make it seem, Québec City is actually a transit-rich community with a lot of great bus stops, and for years, they found it relatively easy to live there without a car. Founded in 1608, it’s one of the oldest cities in North America, and many of its core neighborhoods were not designed with automobiles in mind. Today, the local bus network serves about 44.3 million annual riders, which is only slightly less than San Diego, which has the 20th-highest ridership in the U.S. And that’s despite the fact that the French Canadian capital has just a third of the California city’s population.

But following the birth of their first child, the couple learned that even a city with a mostly-great bus network can be challenging to navigate.

“After we had the baby, the city completely changed for me,” Jackie said. “I was suddenly somebody who had a lot more difficulty standing and getting across the street in the time that was allowed by the pedestrian sign. And getting around the city wiht the stroller was a huge problem — especially when it snowed. It really opened up my eyes to different experiences; the brave souls who use wheelchairs or walkers and public transit to get around certainly don’t have it easy.”

Of course, not everyone in the French Canadian capital rides the bus. Thanks to the post-World War II economic boom, Québec City is also home to the second highest number of highways in Canada, which Jackie jokes makes the metropolis “a bit of an urbanistic paradox.” Suffice it to say, transit isn’t exactly treasured by everyone — and the bad stop that won this year’s title certainly isn’t the only one around.

“Once we made the contest, a lot of people reached out and said, ‘no way, there’s a worse bus stop over here,’” Hoffman laughs.

So the couple launched their very own Sorriest Bus Stops: Québec City Edition — and one of the entries was the westbound stop that was featured in this contest.

Efforts to improve QC’s bad stops aren’t always welcome. In one particularly memorable controversy, the leader of the region’s opposition party, Jean-François Gosselin, slammed the construction of the region’s largest bus shelter, which included a heated indoor area and a small snack bar, declaring that “a $750,000 bus shelter is far too expensive. Everyone knows that.”

That attitude has characterized many of the efforts to expand transit service in Québec City. Mayor Régis Labeaume has spent much of his career fighting to bring a $3.3-billion light rail network to the city; Hoffman also notes that even less expensive transit projects, like expanding bus service to underserved areas, tends to be met with resistance in the community’s wealthier and more heavily residential areas — just like in his home country, the United States. (He immigrated from North Carolina several years ago.)

It’s hard to say what the future holds for the stop on Rue Frank-Carrel. When approached for comment, RTC sent back this chilly and non-commital reply:

“The RTC is aware that the location of some bus stops is less attractive because of the area in which they are located, including this bus stop on Frank-Carrel Street, which is located in an industrial sector. Improvements have been made in the past, but the proximity of the stop to the highway, the municipal road and the traffic lights make the layout more complex. However, the RTC will take advantage of the review of its network to assess the layout of this sector with all the involved stakeholders. Service quality, security and customer experience are priorities for us.”

Still, Jackie and Hoffman say the contest has sparked a conversation in their community — and she hopes to build on that momentum as she embarks on her campaign for mayor.

“After a lot of hesitation about publicly shaming the city I love so much, I am happy that we have made it to the contenders of the sorriest bus stop in North America,” Jackie wrote. “It has provided some much-needed comic relief to a very polemic and heated debate over public transit that has been raging for about 10 years. It has gotten many people talking and thinking about accessibility to transit… Most importantly, Hoffman and I have received many requests to hold a best bus stop in Québec City competition to show the world just how lovely public transit can be.”

That should inspire folks on both sides of the border.

For those of you who were playing at home, he’s the final bracket: