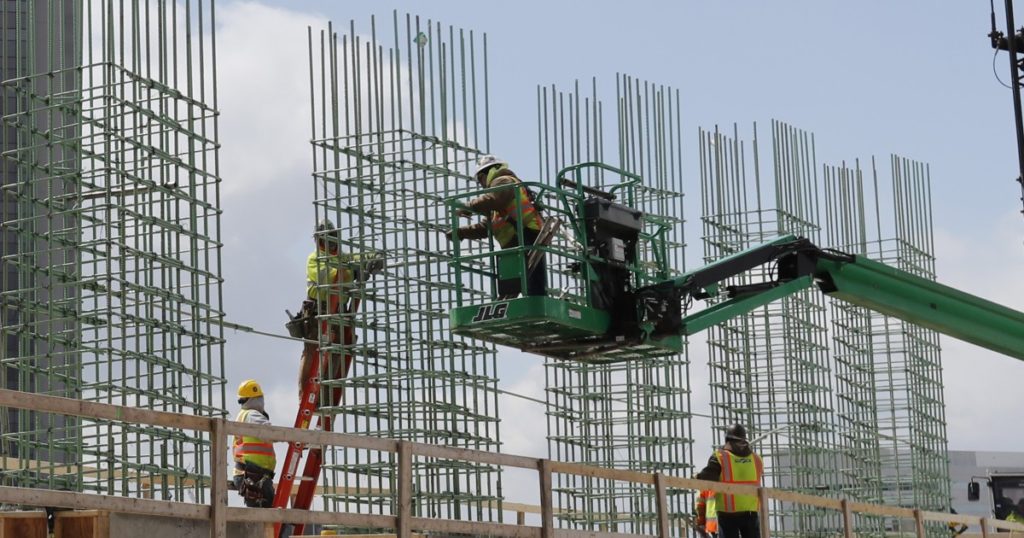 In his rollout Wednesday of massive spending plans for infrastructure, education, healthcare, and other domestic problems, President Biden is seeking a new, far more active role for the government in shaping the nation’s economy.

If he succeeds, many economists think Biden could trigger major increases in growth, productivity, and greater U.S. competitiveness in global markets.

That in turn could reduce income inequality, lower poverty rates, and reverse decades of stagnation in middle-class incomes.

Biden’s proposals, which carry a $2-trillion-plus price tag and come on top of an already-approved $1.9-trillion COVID-19 relief package, will face fierce challenges in Congress. But if the president wins even a major portion of what he wants, many analysts say the result could be huge, both short-term and long-term.

What makes such gains possible is a historic convergence of factors that could break decades of political stalemate and restore the government’s role as a major force in addressing national problems.

The pandemic, with its lockdowns and other restrictions, has created a huge reservoir of pent-up demand. And rock-bottom interest rates and extremely low inflation make it cheaper for the government to increase debt.

At the same time, high levels of unemployment and underemployment, coupled with rising demands for action on a host of social problems, have increased public support for government intervention.

“There certainly is the right set-up in terms of the economy is struggling, the availability to borrow money is so cheap, and national opinion is at a place where we need to do this because our infrastructure is crumbling,” said Katherine Eriksson, an economic historian at UC Davis.

Eriksson sees strong parallels to the Great Depression and its aftermath, when an economic crisis and World War II created public support for unprecedented government initiatives.

That era saw the creation of such transformative government ventures as Social Security, unemployment insurance, and the interstate highway system launched by President Eisenhower.

As was the case then, she said, “we have these huge issues of inequality that make a lot of these policies palatable to average voters… This year will be the year to do it.”

Some economists, mainly conservatives, worry that another round of huge stimulus will overheat the economy and trigger a new surge of inflation. They also fret about the consequences of an ever-rising national debt, although there’s less concern today than in the past.

“We don’t really know how the economy will respond to big fiscal stimulus or to various shocks,” said Nicholas Eberstadt, a political economist at the conservative American Enterprise Institute.

“We don’t know how much slack there is in the system,” he said, referring to unused productive capacity in the economy such as untapped employable people. “And that gets to the question of inflation and interest rates.”

What’s more, Republicans generally are likely to rise up against Biden’s plan to pay for much of the new spending with higher taxes on big business corporations and the very wealthy.

But Biden and Democratic strategists think they have the public’s backing for programs that are projected to create millions of jobs. And the narrow majority Democrats hold in the Senate means they could jam the new spending package through a special budgeting process, just as they did earlier in the month in passing Biden’s $1.9-trillion COVID relief package, which includes funding for unemployment assistance, small businesses, schools and vaccine distribution.

The exact cost of Biden’s new spending proposal isn’t clear, but the infrastructure plan being outlined in Pittsburgh on Wednesday includes roughly $2 trillion to modernize and build up areas including public transit, the electric grid, veterans’ hospitals and electric vehicle charging stations, among other clean energy investments.

Next month the president is planning to announce another sweeping initiative to expand child care, family leave and healthcare.

Some economists estimate it would add more than 3 million new jobs, including many for those without college degrees, helping fill a void left by the pandemic.

The economic payoff further down the road could be even greater in that things like greater connectivity in rural areas and modernized waterways and airports would help drive economic engines.

“If done well, it pays for itself — and some,” said Beth Ann Bovino, U.S. chief economist at S&P Global Ratings Services in New York.

Climate-specific infrastructure projects — a bridge built to withstand extreme weather, for example — would not only save livelihoods but ultimately be a boon to the broader economy, she said. “The productivity boost could shift the potential curve of the growth rate.”

Bovino likened the potential upside of infrastructure spending to the far-reaching gains from construction of the nation’s interstate highways in the 1950s, which was launched in response to a national emergency. Eisenhower argued that the nation needed a much stronger road system because of the Cold War.

After years of watching authoritarian China pump money into massive public works projects, they described the administration’s effort as a way to demonstrate that the U.S. and other democratic nations can deliver for their people.

Some analysts argue that the economy doesn’t need additional stimulus. Economic growth this year is expected to surge to more than 6%, the highest since the 1980s, as many more people get vaccinated and resume traveling, eating out and other activities — and with extra cash in their pockets thanks to $1,400 checks that went out to most Americans as part of the earlier relief package.

However, most economic experts, including Federal Reserve Chair Jerome H. Powell and his predecessor, now-Treasury Secretary Janet L. Yellen, expect any increase in prices to be relatively moderate and short-lived, and they say that the economy is a long way from recovering from the pandemic-induced recession.

One reason the nation isn’t likely to see spiraling wage inflation today is because of global competition; another is the weakening of unions, said Dean Baker, senior economist at the liberal Center for Economic and Policy Research.

Biden’s new infrastructure plan is expected to create many jobs in manufacturing, construction and related services, opening more doors for less-educated workers and potentially helping narrow the unemployment gap between white and Black and Latino people, who have borne a greater share of the health and economic pain from COVID.

As of February, the nation still had 9.5 million fewer jobs before the pandemic hit the U.S., and the unemployment rate was 6.2%, well above the full employment levels of a year ago that resulted in bigger gains for workers at the bottom.

“The key thing is to get the economy running hot,” said Baker.