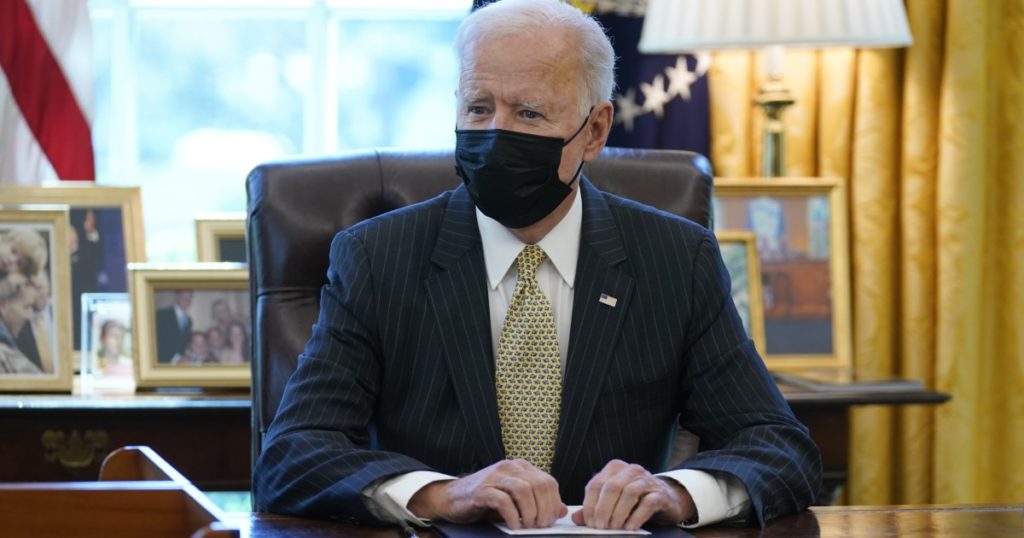 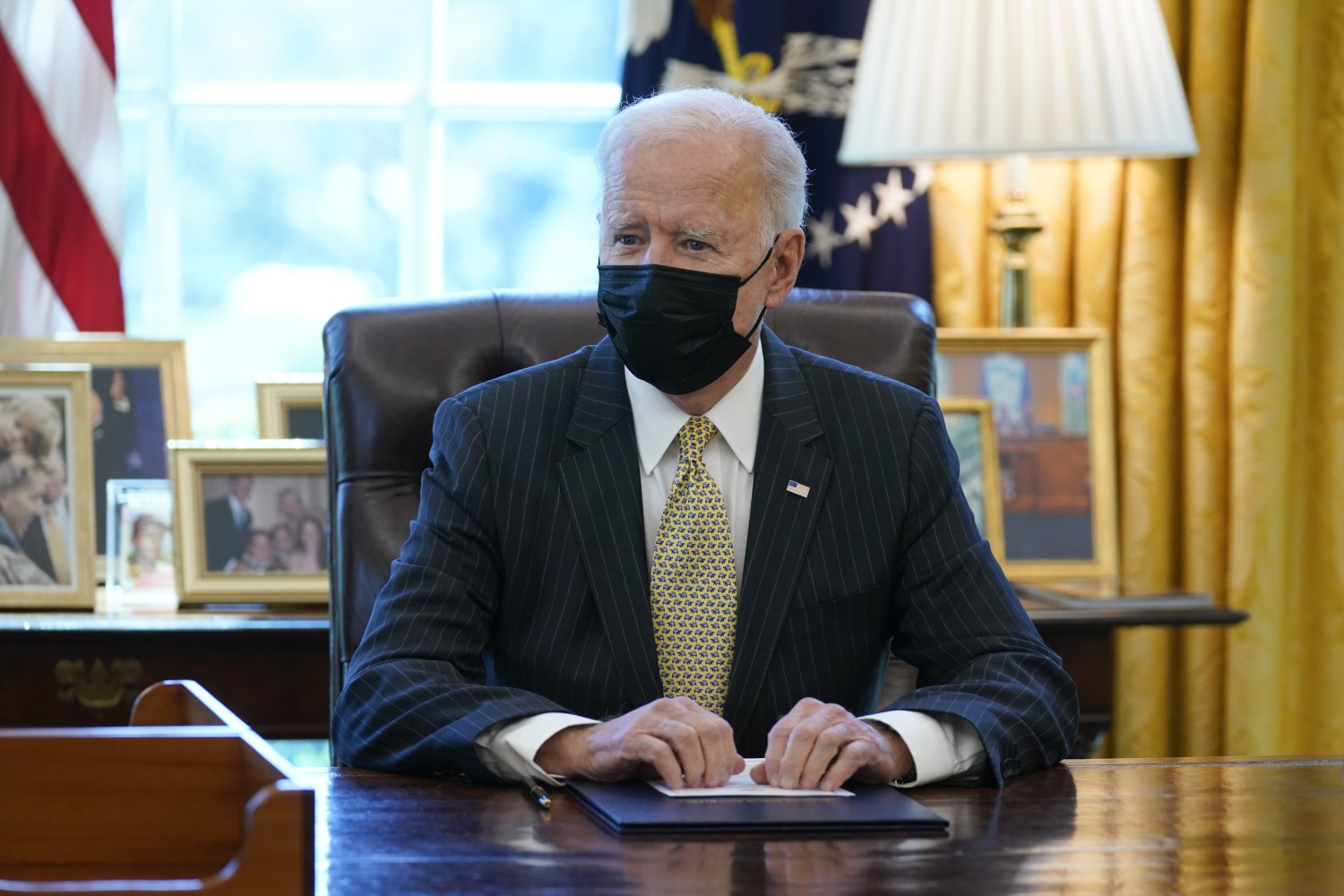 Forty years ago, as a second-term senator, Joe Biden voted for the tax cuts that allowed President Reagan to declare an end to big government.

Later, in the 1990s, Biden supported a balanced budget amendment to the Constitution and talked of the need to reduce the long-term costs of Social Security and Medicare.

As president, Biden has charted a far different course, responding to a changed economic environment and a vastly altered public mood.

Earlier this month, he signed into law a $1.9-trillion spending plan that includes historic expansions of the federal social safety net to address problems worsened by the COVID-19 pandemic.

On Wednesday, he plans to outline just over $2 trillion in spending on roads, bridges, transit, elder care, housing, and upgrades in the nation’s drinking water and electric power systems — the first tranche of a long-term “Build Back Better” plan for investing in the nation’s infrastructure and support for families that could cost more than $3 trillion over the next decade.

Biden’s shift, from backing a key part of Reagan’s agenda to embracing an expansion of government more in tune with President Franklin D. Roosevelt’s New Deal, parallels a change in the electorate. Voters’ concerns about the scope of government and the size of the national debt haven’t disappeared. But for now, that’s not driving how people vote.

As a result, though President Trump handed Biden a federal debt that had reached the largest level since the end of World War II, the new president is operating with fewer political constraints related to the federal deficit than any of his three Democratic predecessors.

“It’s a new era,” said Maya MacGuineas, the longtime head of the Committee for a Responsible Federal Budget, which for years has campaigned, with mixed success, to restrain the federal debt.

The shift is striking. President Clinton, in his first term, bitterly complained to aides about the need to offer austere spending plans to reassure Wall Street. His political advisor James Carville joked that when he died, he hoped to be reincarnated as the bond market, since its investors “can intimidate anybody.”

The previous Democrat in the Oval Office, Jimmy Carter, campaigned on frugality and vetoed some of the kinds of infrastructure projects that Biden — and much of Congress — now support.

President Obama, faced with the worst economic collapse since the Great Depression, proposed a stimulus plan in 2009 that was smaller than many of his economic advisors thought wise, in part because of concern that the public just wouldn’t support something larger, his pollster Joel Benenson said in a recent interview.

Biden faces little of that pressure. Even the statutory caps that for the last decade have restrained federal spending are about to be a thing of the past: They expire on Sept. 30.

Voters do still have qualms about the size of the national debt. A recent poll by the Republican firm Echelon Insights indicated that more than half of voters, including about 3 in 10 Democrats, worried about potential negative consequences of Biden’s spending plans. Those worries, however, have sunk down the list of voter priorities.

Several factors have changed the political climate, beginning with the long, slow recovery from the 2008-09 recession.

“The grinding effects on most Americans of an economy that works well for people at the top [but not for the rest] has become more obvious,” said Sen. Michael Bennet (D-Colo.).

“That problem and challenge has become much clearer,” and became even starker when the pandemic hit, Bennet said this week.

The result has shifted Democratic voters to the left on economic issues, making them — and the party’s elected officials — far more willing to support major new spending plans.

For example, a major increase in benefits to families with children, which passed as part of Biden’s COVID-19 relief plan at a cost of roughly $100 billion for a year, was regarded as too politically controversial for Hillary Clinton to endorse in her 2016 presidential campaign. By 2019, the bill, which Bennet and Sen. Sherrod Brown of Ohio championed in the Senate, was almost unanimously endorsed by their fellow Democrats.

Biden is expected to endorse extending the plan for at least five years when he unveils the second part of his new package — an investment of roughly half a trillion dollars.

At the same time, Republicans, who used to act as a brake on Democratic spending plans, have given up that role, said Elaine Kamarck, a Brookings Institution scholar and former Democratic policy advisor.

“We’ve now had three Republican presidential terms — two of Bush and one of Trump — and in not one of them was there any concern about budget-balancing,” she said.

For President George W. Bush, debt took second place behind fighting what he termed the global war on terror. And Trump “simply didn’t care about the deficit, didn’t care about paying for things,” Kamarck said.

The capstone on the Republican Party’s switch came with the 2017 tax cut, which slashed federal revenue by roughly $2 trillion over a 10-year period. Trump’s Treasury secretary, Steven T. Mnuchin, said the tax law would generate enough economic growth to pay for itself, echoing Republicans since the Reagan era. But after a brief growth spurt, the economy returned to its previous path even before the pandemic hit.

“Democrats are rightfully enraged by the tax cut,” said MacGuineas. At the same time, Republicans “have an ongoing frustration over Democrats’ refusal to acknowledge the problems” facing the government’s huge old-age entitlement programs, which Trump also declined to touch.

“The dynamics have gotten worse and worse,” she said.

MacGuineas gives Biden’s administration relatively high marks for proposing to pay for much of its planned new spending. While the $1.9-trillion American Rescue Plan was financed entirely by additional borrowing, Biden will propose an increase in corporate taxes to pay for the plans being announced Wednesday, White House officials told reporters.

Whether Congress will approve the new taxes or simply go for the extra spending remains an open question, however. Some Republicans have said they’re open to cooperating with Biden on infrastructure; none say they will support higher taxes.

Republicans’ willingness to spend more but tax less sent the national debt rocketing upward after Obama’s second term, in which it declined relative to the size of the economy. By Trump’s last full year in office, debt hit 107% of the size of the economy, the first time it had topped 100% since the mid-1940s.

In theory, high levels of government borrowing can crowd out private investment, drive up interest rates and generate inflation. None of that has happened in recent years. Indeed, economic policymakers have largely been concerned about the opposite worry — interest rates that remain too low and the possibility of stagnation.

Both Treasury Secretary Janet L. Yellen and Federal Reserve Chair Jerome H. Powell have said in recent weeks that they don’t see inflation as an imminent problem and believe the Fed has adequate tools to deal with it if it does emerge.

The lack of negative consequences to date provides another major reason why political figures have had fewer spending constraints.

“We’ve had a prolonged period of low interest rates, and people are not really afraid of inflation,” said Kamarck.

The last major bout of inflation in the U.S. took hold in the early 1970s and was not fully controlled until the steep recession of the early 1980s. For most government officials and economists today, that was before their careers began.

“There are not many politicians around today who remember a prolonged period of inflation,” Kamarck said. “It could come back, but the fact is people aren’t concerned about it.”