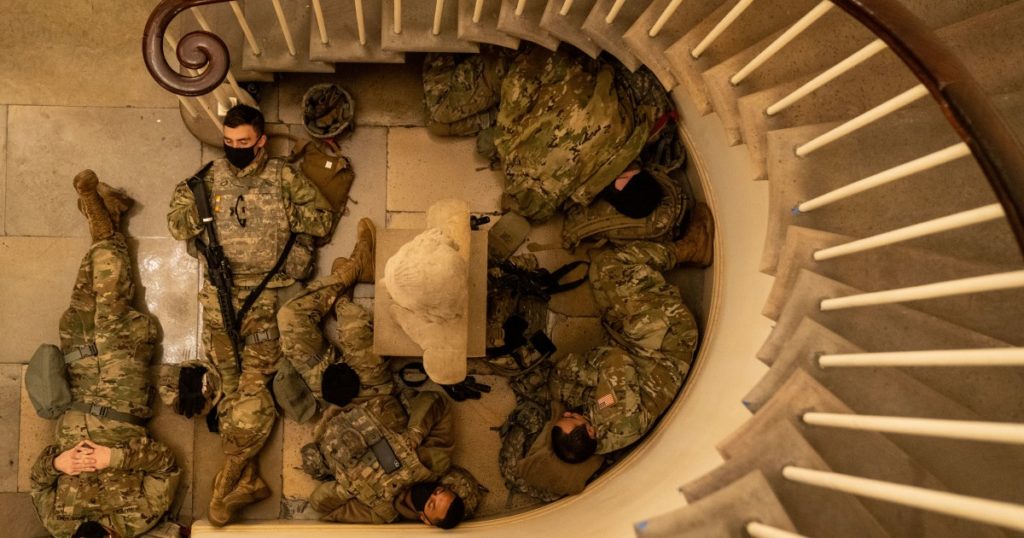 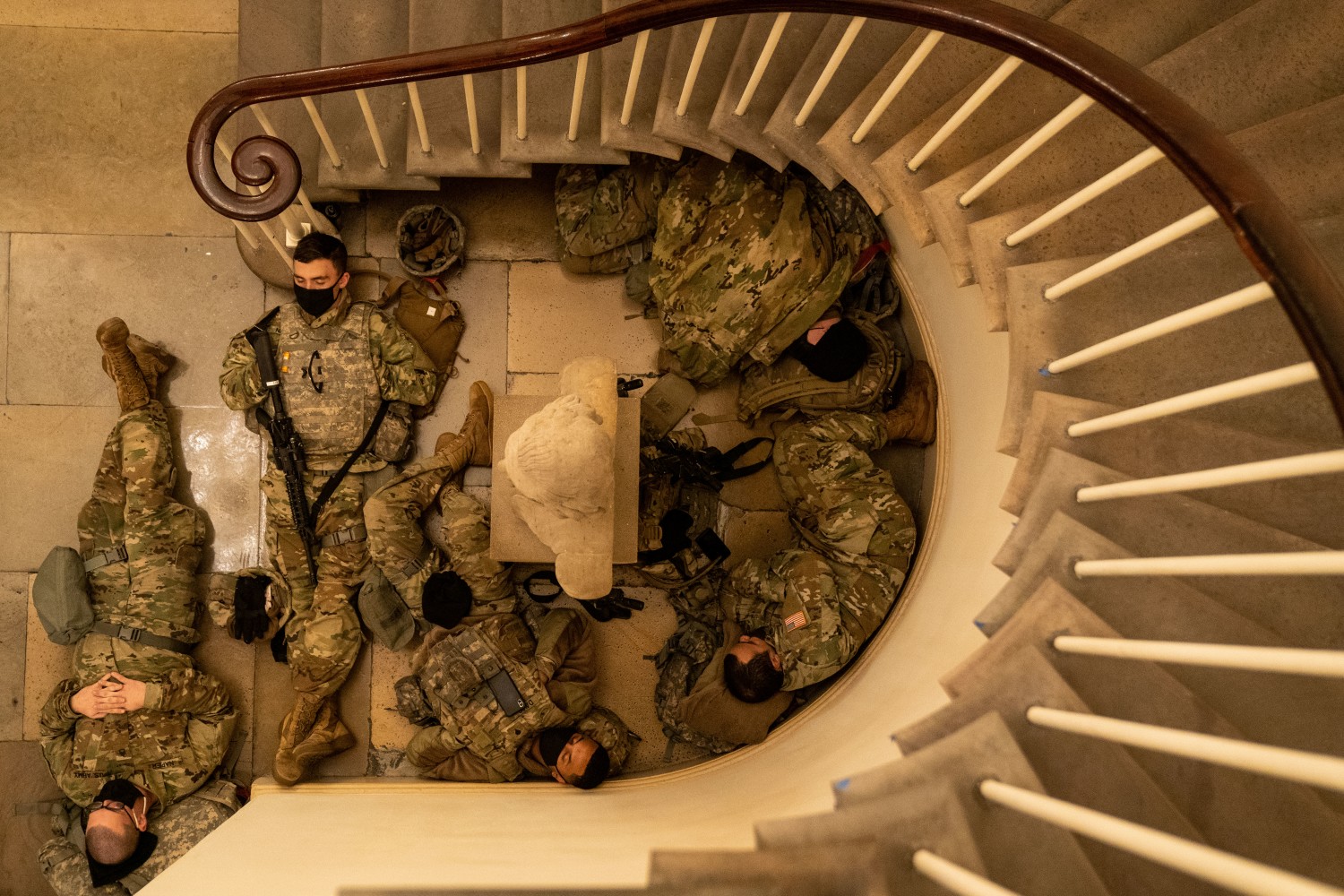 Thousands of police and military troops continued pouring into the nation’s capital Wednesday, transforming the city into an armed fortress in an extraordinary show of force aimed at heading off more mob violence ahead of next week’s inauguration ceremony.

Officials involved in the security preparations said they had never been so concerned about violence in Washington, including in the days after the terrorist attacks of Sept. 11, 2001.

At the U.S. Capitol, where President-elect Joe Biden is scheduled to be sworn in Jan. 20, hundreds of armed National Guard troops joined police behind new eight-foot fencing and checkpoints walling off the grounds. So many Guard members were dispatched to Washington, and so quickly, they were left to sleep on the domed building’s marble floors, a scene reminiscent of the Civil War.

At the White House, the vice president’s residence and other federal buildings and monuments, authorities took similar action — setting up checkpoints, closing streets and conducting aerial surveillance. Pentagon officials said that as many as 20,000 National Guard troops mobilized from multiple states could arrive in the area before the inauguration.

The flurry of activity highlighted how flat-footed Capitol Police and other officials were on Jan. 6 when pro-Trump extremists stormed the Capitol seeking to halt the counting of electoral votes marking Biden’s election victory. Authorities are concerned about Biden’s inauguration but also feared extremists might attempt to disrupt Wednesday’s impeachment proceedings. In a bipartisan 232-197 vote, the House voted to impeach Trump for inciting the mob, making him the first president in U.S. history to be so sanctioned twice. No security issues were reported.

“This is unprecedented,” said Charles H. Ramsey, who helped oversee security for two inaugurations as Washington’s police chief from 1998 to 2006. “We have had security challenges before, but nothing on this scale, because we actually had the Capitol breached.”

The Secret Service, which coordinates security for the inauguration, took command of the preparations Wednesday, more than week ahead of schedule. The FBI and other federal law enforcement agencies were investigating thousands of leads and intelligence reports about threats to disrupt the ceremony or riot in the streets, officials said.

National Guard troops deployed at the Capitol and on the streets of Washington were authorized to carry firearms late Tuesday, a break with tradition that reflected the heightening security concerns, a senior Defense official said.

That change “was requested by federal authorities,” the National Guard said in a statement, adding that “the public’s safety is our top priority.”

President Trump, who last week help incite the mob at a White House rally that later took over the U.S. Capitol, urged restraint in a written statement released by the White House on Wednesday.

“In light of reports of more demonstrations, I urge that there must be NO violence, NO lawbreaking and NO vandalism of any kind,” said Trump, who has frequently undermined his own calls for nonviolence with inflammatory public statements later. “That is not what I stand for and it is not what America stands for. I call on ALL Americans to help ease tensions and calm tempers.”

In a new video released Wednesday by the White House after the impeachment vote, Trump denounced the mob attack on the Capitol and said he had authorized “all necessary resources to maintain order” and to “ensure that a transition can occur safely and without incident.”

The violent mob marched from the White House to the Capitol on Jan. 6, occupying the building for hours to try to stop lawmakers from cementing Biden’s win. Five people died, including a Capitol Police officer. Two explosive devices were found — outside the Democratic National Committee and Republican National Committee headquarters — but they did not explode.

Several officials and lawmakers said the extensive protective measures made it highly unlikely that rioters could repeat the successful breach of the now-heavily defended perimeter at the Capitol or threaten the safety of Biden, Vice President-elect Kamala Harris or other officials.

“Based on the intelligence briefing that we had, I think there are a number of extreme groups who are intending to try to come to Washington on the 20th and stop the inauguration, but they won’t be able to,” said Rep. Diana DeGette (D-Colo.).

Washington was not the only capital that was augmenting security in coming days. Many states were also boosting police presence at capitol buildings ahead of an election protest planned Sunday by Trump supporters.

In Michigan, a state commission banned the open carrying of firearms at the statehouse, which was overrun by militia members during a protest last year. Other states, including Arizona and Georgia, erected barriers around statehouses, while others including Texas assigned state police and National Guard troops to protect them.

California Gov. Gavin Newsom, Senate President Pro Tem Toni Atkins (D-San Diego) and Assembly Speaker Anthony Rendon (D-Lakewood) declined to disclose security measures they have taken but said in a statement that officials “are working together in close cooperation to ensure the safety of everyone who works in or visits the Capitol” in Sacramento.

For his part, the president-elect has played down concerns about taking the oath of office outside, on a temporary platform constructed on the Capitol’s West Front. “I’m not afraid of taking the oath outside,” Biden told reporters Monday.

Trump is skipping the event, but Vice President Mike Pence will be there, along with former Presidents Obama, Bush and Clinton and their wives.

The inauguration is normally a festive time in Washington, filled with parties, brunches and crowded balls. But such events have been scaled down this year due to the COVID-19 pandemic, and local and federal officials are urging people not to travel to Washington to celebrate or protest. Tickets to the swearing-in inauguration ceremony are limited. The grounds of the Capitol will be closed to the public. Spectator stands near the White House have been taken down to discourage crowds, and inaugural balls have been canceled.

Even the customary parade down Pennsylvania Avenue, where the new president and vice president and their spouses often exit their armored vehicles and interact with spectators, has been replaced with a virtual event. Such changes have made protecting Biden and other high-profile figures much easier, current and former security officials said.

In a briefing on Wednesday, D.C. Mayor Muriel Bowser strongly discouraged travel to the capital and described the inauguration as a virtual event, likening it to New York City’s ball drop on New Year’s Eve, when police blocked off large sections surrounding Times Square.

By Wednesday afternoon, law enforcement had begun cordoning off perimeters around the White House, the Capitol, the National Mall and other areas in downtown Washington. Bowser said anyone attempting to enter those areas should expect to be stopped by security and would be permitted only for “essential business.”

The urban center of D.C. was quieter than usual Wednesday evening. Vehicles were kept off the streets closest to the Capitol and National Mall by police cordons, some set up as far as 20 blocks from the Capitol.

The Capitol complex was ringed by a tall fence. Near its northwesternmost corner, outside the National Gallery of Art, a protester chanted, “Trump, you’re fired,” and bid people a “Happy impeachment day.”

As authorities prepare for an intense few days, they are also digging into what went wrong Jan. 6. Several lawmakers voiced fears Wednesday that other members of Congress or their staffers had aided pro-Trump extremists in planning the takeover of the Capitol.

More than two dozen House Democrats asked U.S. Capitol security officials to investigate tours of the complex the day before the attack, suggesting that members of the mob may have been conducting reconnaissance on the building.

“Members of the group that attacked the Capitol seemed to have an unusually detailed knowledge of the layout of the Capitol Complex,” wrote the lawmakers, led by Rep. Mikie Sherrill (D-N.J.). “The presence of these groups within the Capitol Complex was indeed suspicious.”

In a Facebook Live chat Tuesday, Sherrill said she saw members of Congress leading the tours and suggested the groups were engaging in “reconnaissance” of the Capitol complex.

Keeping as many extremists from returning to Washington for the inauguration is a top priority for the FBI and other law enforcement agencies that have launched an aggressive effort to apprehend as many people as possible who participated in the Capitol siege.

“There is a lot of work being done prior to the 20th, with some of the most dangerous people being rounded up,” said Ramsey, the former Washington police chief. “They are rounding up as many as they can.”

So far, authorities have arrested at least 60 people on a variety of charges related to the attack, and federal investigators have opened more than 170 investigations.

An FBI bulletin Wednesday warned law enforcement agencies that pro-Trump extremists will pose a serious security risk in the coming months, according to a person briefed on the alert. ABC News reported earlier Wednesday on the bulletin’s existence.

Citing their deeply held though false belief that the election had been stolen, extremists may believe that their only remaining action is violence, the FBI wrote.

The FBI said extremists may not view their attack on the Capitol as a failed mission. Rather, the bureau warned, they may believe the siege helped “advance” their goals.