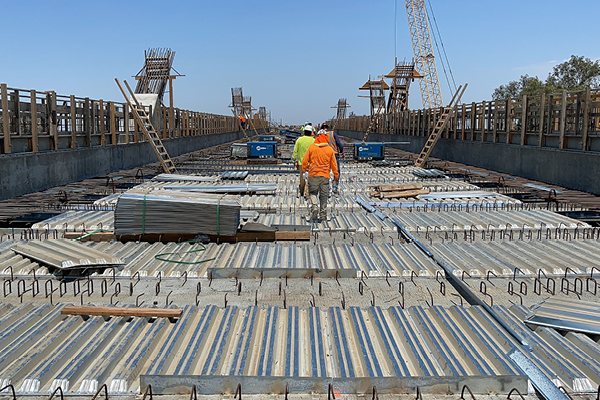 President Joe Biden and Fresno Mayor Jerry Dyer underscored their support for funding California’s bullet train project out of the $1 trillion federal infrastructure bill on Wednesday. “Fresno is ground zero for California’s high-speed rail efforts,” said Dyer in a Zoom call with the President. “Federal assistance is vital. And I’m hopeful this infrastructure bill will provide that support to us here in Fresno.”

“I’m a big rail guy. We have more money in this area, for high-speed rail, than all the money we’ve spent on Amtrak–this is a gigantic investment,” responded the President. “We’re talking about electric. We’re not talking about diesel. And we’re talking about being able to transform and impact on the air quality in your area.”

It’s yet another indication that the 2020 election and the resulting infrastructure funds made available promise to be a major boon for California’s high-speed rail project.

“This is a once-in-a-lifetime investment in rail. We see somewhere between $20-40 billion in funding we can compete in to get funds for the California high-speed rail project, and that’s what we intend to do,” said Melissa Figueroa, a spokeswoman for California’s High-Speed Rail Authority.

“It will cover the cost to connect the Central Valley line to San Jose (including an expensive tunnel through the mountains), and build the tunnel under San Fran into Transbay station,” explained the US High-Speed Rail Association’s Andy Kunz. “It will be a game-changer.”

There are still unknowns about exactly how much of that funding will come to California, since the infrastructure bill allocates rail money for the entire country. The $20-$40 billion estimate is based on the state’s ability to compete for those funds. But given that California is the state with the only project actually under construction–119 miles of it–with planning and construction documents nearly completed on the entire stretch from San Francisco to Los Angeles, it ought to be very competitive.

“In 2009, California got almost 40 percent of the national pot which is a really good outcome for 12 percent of the population,” explained Boris Lipkin, Northern California Regional Director for the project, about the last time there was money from Washington available nationally for high-speed rail. That was during President Barack Obama’s first term, when his vice president, Joe Biden, successfully pushed to get $8 billion for high-speed rail into a federal stimulus bill.

If things go well, California’s could host trains running at 200-plus miles per hour in four or five years on the route stretching from Bakersfield to Merced, with connections or continuing service on to Oakland, Sacramento, and San Jose. At that point, shovels should be turning and concrete pouring on the entire route between L.A. and San Francisco.

Still in flux, however, is $4.2 billion in allocated state funds left in political limbo in the Governor’s budget, thanks to opposition from Speaker Anthony Rendon, Assembly Transportation Committee Chair Laura Friedman, and others who want high-speed rail money diverted from the Central Valley portion of the project to commuter rail in their districts (L.A. continues to spend billions on freeway widenings). They’ve argued that the state should run polluting diesels in the Central Valley or even slower battery-powered trains for the Central Valley instead of electrified, zero-emissions high-speed rail.

All of which has already delayed contract signings and resulted in delays and higher costs for the project, confirmed a source with the state.

“California is the most visionary high-speed rail project in America and is being built to top world-class standards,” said Kunz. “As soon as trains are operating, the criticism will quickly fade away like yesterday’s news, and everyone will be thrilled to have such a fast, easy, reliable mode of transport–not seen in America yet. At that point, the whole nation will be clamoring for high-speed rail in their states.”