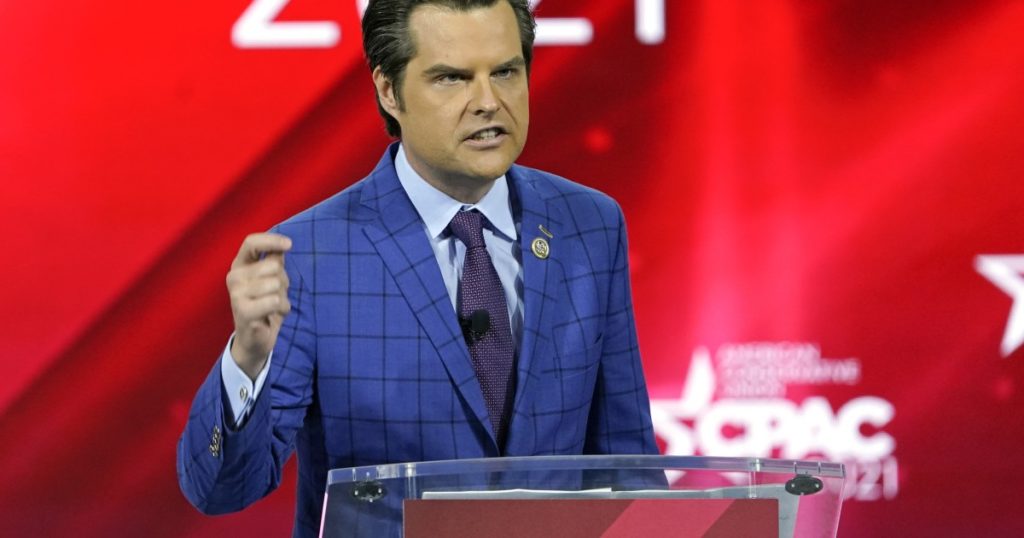 Matt Gaetz was so taken with the politics and showmanship of Donald Trump that he made a point of proposing to his fiancee in December at Trump’s Florida resort and boasted afterward that the former president insisted on hosting the wedding.

By then, the GOP establishment had shown itself eager to overlook behavior by the Trump protégé, who invited a Holocaust denier to the State of the Union address, reportedly bragged of sexual conquests to House colleagues, and amplified incendiary conspiracy theories over social media. It was too risky to freeze out the Fox News darling and Trump loyalist from the Florida Panhandle, who didn’t hesitate to use his celebrity status with the GOP base to settle scores.

Now, Gaetz, 38, is being investigated as a part of a federal sex trafficking probe involving a 17-year-old, according to people familiar with the case. The details at the center of the inquiry would send most lawmakers running out of public view and into a bunker with a team of lawyers.

They have sent Gaetz running to the Trump playbook.

Gaetz is pushing its limits like no politician before him, not even Trump, who alleged deep state conspiracies and smeared his accusers to inoculate himself against charges of serial sexual misconduct and lawlessness. The Gaetz drama has become an inflection point for the GOP — testing whether the party can extricate itself from the most troublesome Trump hangers-on, or if the former president has created an effective template for their durability.

The investigation into Gaetz, according to people familiar with it, began during the Trump administration, with signoff from former Atty. Gen. William Barr. It is linked to the sex trafficking indictment of former Seminole County, Fla., tax collector Joel Greenberg, who is accused of meeting women through websites that connected them with men willing to provide gifts, lavish dinners and travel in exchange for sex. Among Greenberg’s alleged sex trafficking victims is an underage teenage girl, according to the indictment.

Investigators suspect that Greenberg introduced women to Gaetz, who had sex with them, according to people familiar with the probe. Federal authorities are investigating whether Gaetz had sex with a 17-year-old girl and gave anything of value to her, such as gifts, hotels stays, travel or allowances, those sources said.

Authorities are also investigating whether Gaetz paid for sex with other women who they believe had been recruited by Greenberg, people familiar with the case said. Greenberg has pleaded not guilty and is being held while awaiting trial. Anthony Coley, a Justice Department spokesman, declined to comment.

Gaetz, whose office did not respond to requests for comment, denies it all. He says the investigation is part of a deep state scheme to sideline a vocal conservative.

“Bizarre claims are being made about me shortly after I decided to take on the most powerful institutions in the Beltway: the establishment; the FBI; the Biden Justice Department; the Cheney political dynasty; even the Justice Department under Trump,” Gaetz wrote in an op-ed posted by the Washington Examiner on Monday.

The congressman alleges the investigation is part of an extortion scheme. He links it to an overture to his family from GOP Florida operatives seeking $25 million to fund the rescue of an FBI agent who disappeared in Iran more than a decade ago and is widely believed to be dead.

One of the operatives, Bob Kent, admitted in a radio interview this week that he told Gaetz’s father, former Florida Senate President Don Gaetz, that he was aware the congressman was facing legal troubles and funding the rescue plot could help burnish Matt Gaetz’s reputation but that he had nothing to do with the investigation. Kent claims to have evidence that the FBI agent, Robert Levinson, is alive and being held hostage.

The opaque exchange highlights how deeply immersed the Gaetz family is in the murky world of Florida politics. Matt Gaetz said it ultimately led to his father wearing an FBI wire.

There is no evidence linking the convoluted plot to the Justice Department. But it has helped Matt Gaetz fortify his conspiracy theories, which many constituents in his deeply conservative Panhandle district find compelling.

“That district does not like the establishment,” said a Florida political operative who has worked for Republicans and spoke frankly on the condition of anonymity. “QAnon is big there. It doesn’t matter if Republican leaders censure or strip Matt Gaetz of his committees. The people would see it as fake news.… Matt Gaetz is like Donald Trump there. He could go out and shoot someone and he would still get elected.”

Trump waited more than a week after news broke in the New York Times that Gaetz was being investigated to speak up on his behalf. Trump on Wednesday denied Gaetz asked him for a blanket pardon, a response to reports that the congressman sought such protection from White House officials. Trump also reiterated that Gaetz had claimed he was innocent.

A more spirited defense of Gaetz from the Trump machine is coming from the fringe: Convicted — and pardoned — felon Roger Stone urging Gaetz to double down on the Trump playbook, conspiracy theorist Rep. Marjorie Taylor Greene of Georgia alleging “a deep state attack and media smear fest” and Tea Party firebrand Rep. Jim Jordan of Ohio pronouncing he stands with Gaetz. Women for America First — a pro-Trump nonprofit that hosted the Jan. 6 rally before the Capitol riot — tweeted Tuesday that Gaetz was speaking at a conference starting Thursday at a Trump resort in Miami.

Fox News has yet to put the Floridian back on camera following an awkward interview with conservative pundit Tucker Carlson last week. Carlson hardly embraced the congressman’s claims he was being set up, saying it was “one of the weirdest interviews” he’d ever done.

“This could be a redemptive moment for the few voices in the party that matter to say ‘enough,’” said Mike Madrid, a GOP consultant in California who is working to loosen Trump’s grip on the party.

“No one has been able to emulate Donald Trump’s success,” Madrid said. “The appeal of Donald Trump is he is Donald Trump. It is not a style. You can’t replicate that. He gets away with corruption, sexual improprieties, racism, shamelessness, grifting. But without his personality, what you will see is a collapse of this hierarchy of fools built up around him.”

At least that is what “Never Trumpers” like Madrid are hoping, as they take note of how few Republicans are rushing to defend Gaetz.

Yet Republican power brokers are moving cautiously, anxious that putting too much distance between themselves and Gaetz could touch off a backlash among Trump’s followers. The few that have commented for the record are expressing concern, not condemnation.

House Republican Leader Kevin McCarthy of Bakersfield has said only that Gaetz will be removed from his committees if he is indicted. This is in contrast to lawmakers like Rep. Ted Lieu (D-Torrance), who are demanding Gaetz at least be removed from the Judiciary Committee, which oversees the FBI, while he is being investigated by the FBI.

Rep. David Valadao (R-Hanford), a Central Valley moderate, severed his association with Gaetz by redirecting the $2,000 campaign contribution from the Floridian to a Fresno organization supporting victims of domestic abuse. But several other California Republicans who received such checks from Gaetz are sitting tight.

“Shame has largely been removed from the Republican Party,” Madrid said. “But the question is whether there is a line which you cannot cross. We are about to find out.”

One erstwhile Gaetz confidant who has drawn a very clear line is the former California congresswoman Gaetz defended when she was engulfed by her own sex scandal. Gaetz admonished his GOP colleagues who attacked Katie Hill when naked pictures of her and a woman who worked on her campaign emerged, along with allegations, denied by Hill, that she engaged in a sexual relationship with one of her congressional staffers. Hill accused her ex-husband of leaking the photos.

“Who among us would look perfect if every ex leaked every photo/text?” Gaetz tweeted at the time.

She pointed to the sex trafficking investigation and also a CNN report that Gaetz showed congressional colleagues naked images of women he claimed to have slept with. She said the actions he was accused of “are morally reprehensible and unacceptable for a lawmaker.”