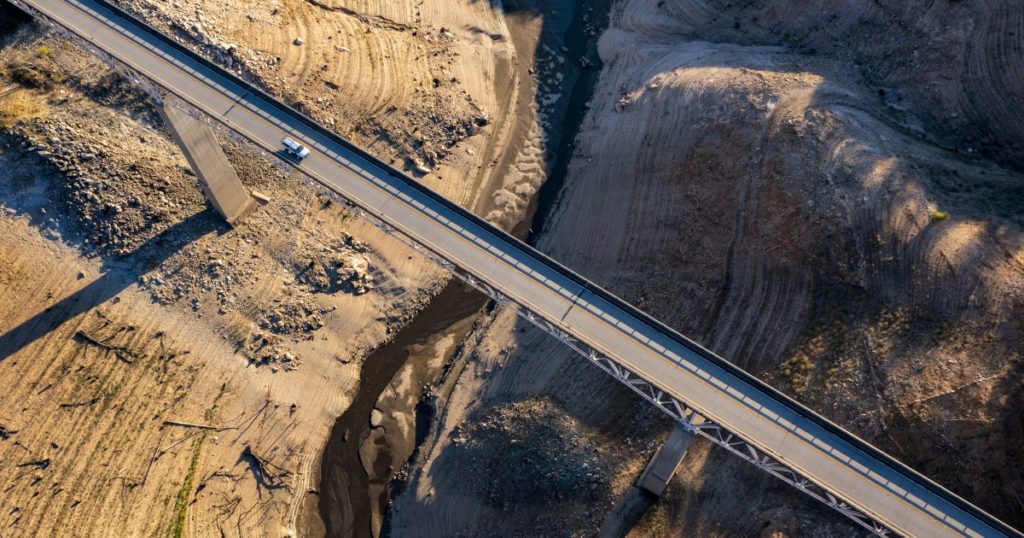 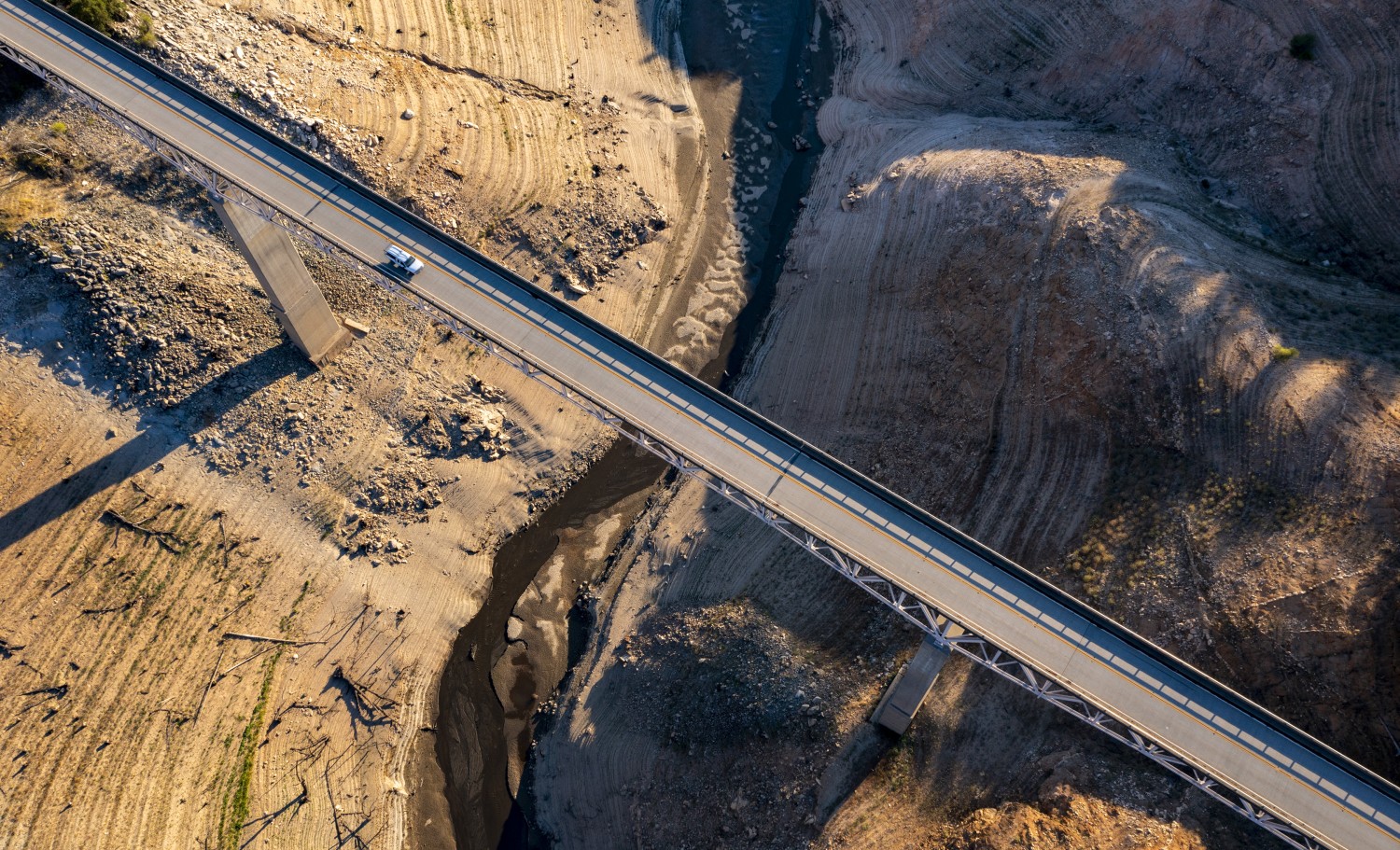 When Gov. Gavin Newsom asked Californians to voluntarily conserve water last week as he stood in front of the retreating shoreline at Lopez Lake in San Luis Obispo County, some must have had déjà vu.

It was only six years ago when former Gov. Jerry Brown stood in a field near Lake Tahoe that was bereft of normally plentiful snow and called for water restrictions amid the state’s punishing years-long drought.

But by that point, Brown was done asking. In April 2015, he ordered cities and towns across the state to cut water use by 25%, the first mandatory statewide water restrictions in California history that browned lawns and shortened showers to the tune of more than 500 billion gallons saved that year.

As Californians wonder when mandatory water restrictions might be coming, officials and experts including those who played roles in addressing the 2012-2016 drought say the pace and strategy of Newsom’s current response sufficiently incorporates insights gained from the past.

The governor’s approach, however, has also frustrated some scientists who consider his actions too little too late as record-high temperatures intensify the water shortage, particularly in northern and central parts of the state.

Newsom, who is facing a September recall election, called on Californians on July 8 to voluntarily cut their water usage by 15% compared with last year and expanded his regional drought state of emergency to 50 counties, home to roughly 42% of the population.

“We’re optimistic that Californians are going to step up as they have in the past,” said Natural Resources Agency Secretary Wade Crowfoot. “And if the drought persists and conditions get worse, we’ll obviously have to contemplate other actions including mandatory restrictions.”

Conditions already appear to be outpacing the previous drought: Scant winter rainfall led to minimal snowpack on the Sierra Nevada mountains, and spring heat evaporated much of the runoff that was expected to flow into reservoirs.

Felicia Marcus, who worked closely with Brown as chair of the state water board during California’s last record-breaking drought, called Newsom’s voluntary conservation a prudent start.

“You can always do more — like to save fish — or you could have done more earlier in the year. There are always coulda-shoulda-wouldas, but this is a welcome step,” said Marcus, who is now a visiting fellow at Stanford University.

Marcus says she expects state officials to make a decision on mandatory restrictions by monitoring available water supplies and scouring data to see whether communities are heeding Newsom’s voluntary call to conserve.

“We need to accelerate everything that we thought we had to do even five years ago in the face of climate change, because it’s clearly coming harder and faster than we were expecting,” Marcus said. “I think it takes a certain … planning for the worst and not just hoping for the best.”

Peter Gleick, a longtime water scientist and founder of the Pacific Institute in Oakland, is more critical of Newsom’s decision making.

He said research shows a 15% voluntary cut in water use would be relatively painless for both the agricultural sector and Californians in urban areas.

“It should have been done two months ago or three months ago. It’s not as though we haven’t seen this drought coming,” Gleick said. “I’m sorry it’s not more than 15%. I’m also sorry it’s not mandatory, because we are in a worse position now than we were in the third and fourth year of the previous severe drought.”

The question of why Newsom hasn’t declared a statewide drought emergency can be answered in large part by looking to the past at the blowback Brown received from local water districts tasked with implementing his mandatory restrictions.

“When that 25% reduction came into place there was a lot of criticism from local agencies who said, ‘We don’t need to reduce, we’ve got extra supplies’ and ‘You’re punishing us for the work we’ve already done to prepare,’” said Rachel Ehlers, water policy analyst at the Legislative Analyst’s Office.

Elhers, Crowfoot and other longtime observers of water politics say that smaller water agencies that depend on a single well or groundwater source often look more kindly on state intervention during difficult drought times. But large urban districts such as the Metropolitan Water District of Southern California that heavily invested in reservoirs and recycling plants have made clear that they — and their budgets, which are dependent on supplying water to customers — preferred to be left alone.

Those stances, along with 2018 legislation that required local water districts to do more intensive water management planning, led the state to be more attuned to utilities and their unique circumstances, Ehlers said.

Southern California, for example, has been spared from Newsom’s emergency order. Conditions haven’t been as dry, and utility executives say water supply storage has granted them more flexibility.

“We spent a lot of effort learning from the last drought, and put in this framework where water utilities had to develop their own plans for reacting to shortages,” said Brad Coffey, group manager at the Metropolitan Water District of Southern California. “So let’s think about the wisdom of allowing those plans to come into effect, rather than stepping in and kind of nullifying those plans by deciding to do something else on a statewide scale.”

Brown’s pioneering mandatory restrictions are far more likely to be remembered by Californians for yellowed grass than water agency politics.

With the help of local lawn-removal incentives and social pressure, his ambitious 25% reduction goal nearly became a reality. Between June 2015 and April 2016, residential water use in California’s urban areas fell 24.5% according to UC Davis researchers.

Some conservation efforts, such as new drought-tolerant lawns, led to permanent change. Urban water use levels are currently at 15% lower per capita than those in 2013.

“You’re going to have to have a really wet year next year to get us back to average, and there’s no guarantee of that. What happens if it’s dry or even below normal? God forbid another critically dry year,” Ekdahl said. “Then we’re in a really bad situation everywhere.”

“The year after year of dryness came upon Gavin Newsom a little quicker,” said the Democrat, who represents Monterey and Santa Cruz counties.

“He’s following a similar path [as Brown]. But regardless of these two situations, if you’re a governor you’re limited to what’s in your toolbox. The big thing you have is the bully pulpit to tell Californians that they have to save.”