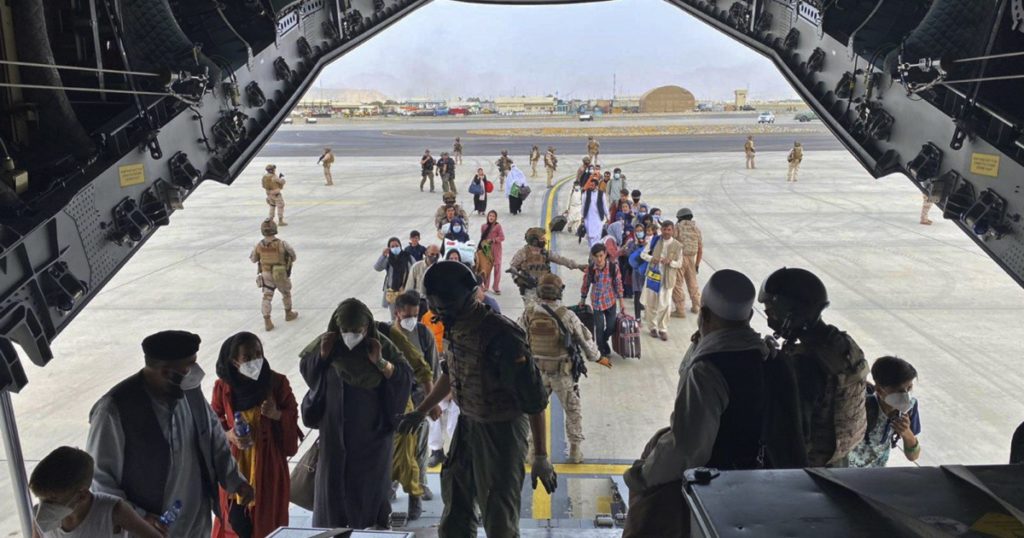 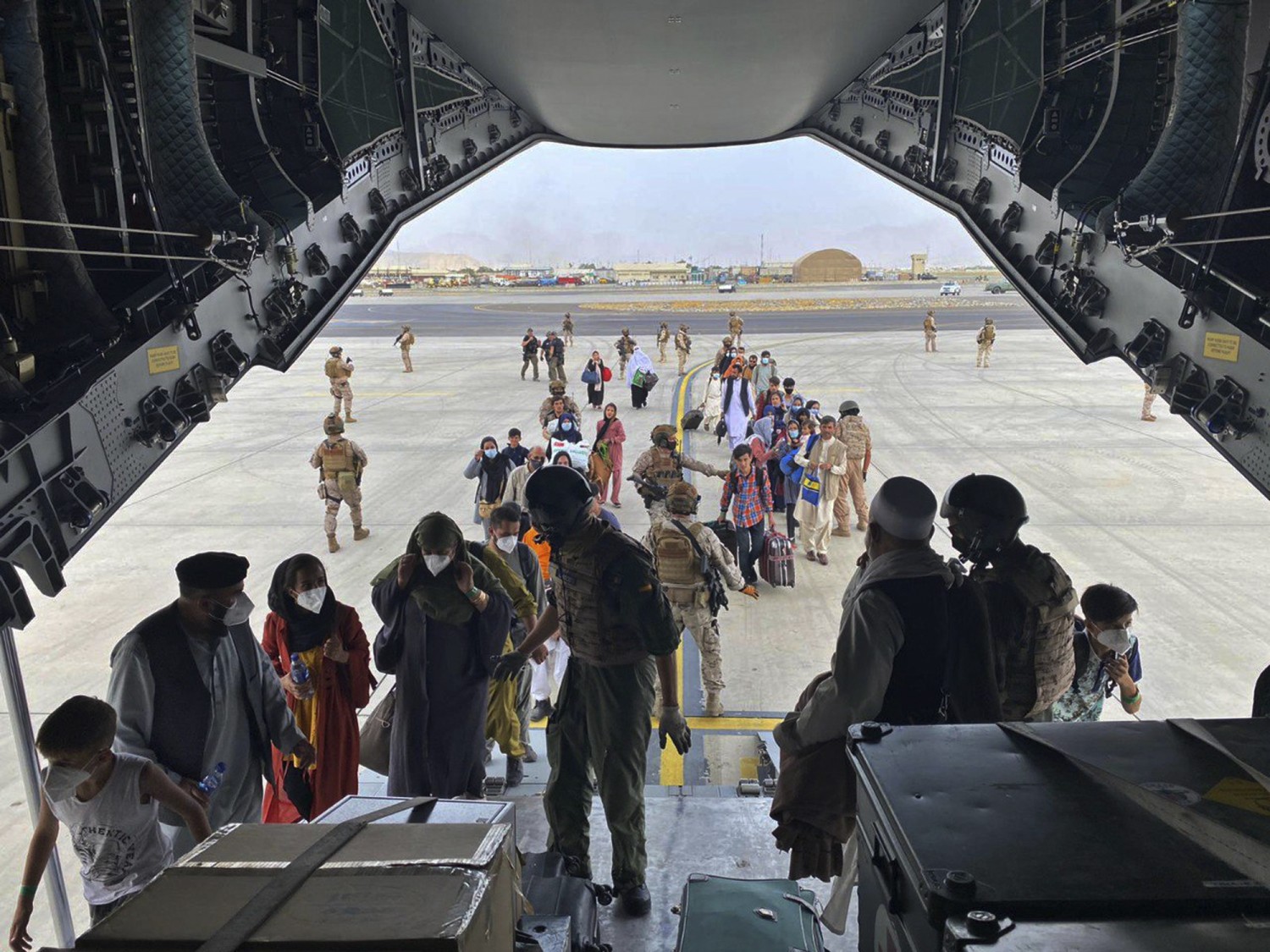 Thousands of Afghan and U.S. citizens were still struggling to leave Afghanistan on Wednesday, some unable to reach the Kabul airport or, once they arrived, violently turned away.

An American who reached out to the office of Rep. Ken Buck (R-Colo.) for help trying to evacuate said the Taliban blocked access to the U.S. military-occupied side of the airport and turned her away.

“My family has attempted to get to the gate at the airport three times,” she wrote on WhatsApp. “The crowds are too big. They were beat with sticks by members of the Taliban.”

President Biden and members of his administration faced criticism from lawmakers in Congress for botching the Afghan evacuation but insisted late Wednesday that the U.S. was committed to getting the remaining Americans out — an estimated 10,000, according to the Pentagon — even if that means extending the withdrawal beyond his Aug. 31 deadline.

“If there’s American citizens left, we’re going to stay to get them all out,” Biden said during an interview on ABC News.

Biden said the Taliban had agreed to let Americans into the airport and that “they’re cooperating, letting American citizens get out.”

His remarks came as the U.S. Embassy in Kabul issued alerts warning citizens that it could not ensure their safe passage to the airport and that space on evacuation flights would be first come, first served.

“We’re going to evacuate everybody that we can physically, possibly, evacuate,” Defense Secretary Lloyd J. Austin III said Wednesday at a briefing, adding that officials were attempting to “deconflict” with the Taliban to create passageways to the airport for evacuees.

Gen. Mark A. Milley, chairman of the Joint Chiefs of Staff, said the Taliban was “facilitating the safe passage to the airport for American citizens.”

“We fully intend to successfully evacuate all American citizens who want to get out of Afghanistan,” Milley said. “They are our priority No. 1.”

U.S. Deputy Secretary of State Wendy Sherman said during a separate briefing that she had heard reports that the Taliban was setting up checkpoints and blocking the airport , but that she had not heard of any Americans turned away.

Those coordinating the evacuation — the largest civilian evacuation since the Vietnam War, according to Milley — described it as chaotic, plagued by logistical confusion and delays. Members of Congress from both parties faulted the Biden administration for leaving Americans at the mercy of an extremist group.

“Biden must immediately provide a plan to protect Americans and get them back home,” House Minority Leader Kevin McCarthy (R-Bakersfield) posted on twitter.

“Americans are stranded in Afghanistan. The Taliban has taken control. The State Department can’t guarantee Americans safety. Where is the President?” Buck posted.

Sen. Tom Cotton (R-Ark.), an Army veteran who served in Afghanistan, directed staff to assist Americans in Afghanistan this week after his office was contacted by an Arkansan stuck at a Taliban checkpoint, spokeswoman Caroline Tabler said.

“The Biden administration abandoned Americans in Afghanistan, forcing them to seek safety without support of our government. Entirely and unequivocally unacceptable,” Cotton posted on Twitter on Wednesday.

Cotton’s office was helping more than 500 seeking to evacuate from Afghanistan, many of them U.S. citizens facing logistical hurdles.

“That was our biggest barrier and continues to be: People stuck behind Taliban checkpoints,” Tabler said, although she said the office has also heard from many turned away from the airport despite guarantees of safe passage from the State Department. “We’re just trying to support the State Department’s efforts as best we can. A lot of the people on the ground feel like they have not been getting enough communication.”

She said other members of both parties in Congress have contacted Cotton’s office to set up similar evacuation efforts.

Karen England of Clarksville, Tenn., contacted Cotton’s office for help getting an Afghan American U.S. citizen who had worked as an interpreter for the U.S. Army evacuated with his wife and three children.

She said the man had been living with her relatives in the U.S. but returned to Afghanistan a few months ago to try to expedite visas for his wife and two eldest children (the baby is a U.S. citizen).

England said the man, who she did not identify because of security concerns, had been unable to reach the airport for days.

“The Taliban was shooting, he couldn’t even get past the Taliban to get up to the military side” of the airport, she said. “Taxis were refusing to take people to that side. Then you’ve got to get to the front of the line.”

England said the State Department did not assist them, and she dismissed the Defense Department briefing Wednesday as “just all false. They’re saying it’s a priority, but unless you’re sitting in the airport, you can’t get there.”

She said the man and his family finally reached the airport Tuesday morning and, “Sen. Cotton’s office did make sure that when he arrived he got through the gate safely. People are holding up their babies trying to get them through the gate.”

Now, England said, “I have a sole goal: to apply pressure to get the other Americans out safely.”

U.S. groups such as the Catalyst Fund and Open Society Foundations were also trying to resettle Afghan evacuees Wednesday as charter flights and private airlines were temporarily grounded in Kabul.

Mark Malloch-Brown, president of the Open Society Foundations, said they had contracted charter flights and submitted manifests for more than 300 staff, relatives and members of at-risk groups and have hundreds more waiting. They plan to fly them to a third country en route to the U.S., likely in the Balkans where the foundation also works, he said.

“We had hoped to have people out by now, but we don’t because of delays,” he said Wednesday. “Throughput has been slower than expected, and U.S. flights have understandable taken precedent. We’ve been told charters like ours have been put into the queue. We are hopeful for progress in the next day or two.”

Malloch-Brown said he hoped the Pentagon and State department would be true to their word and add charters to the mix of departing flights because, “You can’t just take Americans and those with [special immigrant] visas out. You’ve got to take this larger group who have not just worked with the U.S. but championed human rights.”

The cost of chartered 737 planes, which seat about 150, has increased to at least $500,000 each because of insurance and the uncertainty of when they will be allowed to depart Kabul. Malloch-Brown said that when he talked to staff in Afghanistan on Wednesday, their main question was, “When will a plane get here?”

“People are very anxious; they’re just desperate to get out,” he said, despite Taliban checkpoints, insecurity and deaths reported near the airport.

“They feel safer going to the airport than staying,” he said.

On Wednesday, the New York-based nonprofit International Refugee Assistance Project filed petitions with the State Department on behalf of Afghan special immigrant visa applicants it represents and the estimated 20,000 other applicants and their families — about 100,000 people total — awaiting evacuation to the U.S.

“We don’t know that there’s a clear plan at all to evacuate” them, said Becca Heller, the group’s executive director.

Heller said about half of those with pending visa applications are mired in bureaucracy, stuck awaiting final approval by the U.S. Embassy.

“They’re blaming our own allies for their failure, for not having a functional application process,” she said of the administration.

Heller’s group is assisting several thousand Afghans with pending visa applications, some of whom have waited five years. Three families were evacuated from Kabul overnight, about 20 people, she said, while a dozen other U.S. citizens and green card holders received notices that they would be evacuated — if they could get to the airport. One of the Afghans who evacuated overnight was tear-gassed and shot at while entering the airport to board a flight to the U.S., Heller said. Others were evacuated to Denmark and Qatar.

“The No. 1 need is to keep the airport secure, to keep a corridor to the airport open, a path so people can get on those planes,” she said. “There’s so many lists circulating from different groups: women at risk lists, green card holder lists…. There are huge efforts being made to collect as many names as possible. The big question is, do we have the political and military resolve to hold the airport long enough to get through the lists?”

An Afghan women’s rights advocate whom Hellers’ group helped file a petition for protection after she was left out of the evacuation effort despite having worked on U.S. projects said Wednesday that she feared being targeted by the Taliban.

“How much more can I hide from them, myself and my family? They can find out any moment, any day, and kill us all,” the woman, who asked not to be named, said of the Taliban, calling on the U.S. government to evacuate her.

Her special immigrant visa application has been pending since 2018.

“Please stop promising. Please start taking action,” she said. “The only hope I have is you.”

Heller’s group and others were also lobbying the Biden administration to offer Afghans humanitarian parole in the U.S.

“We warned the administration it was coming and we needed to develop a detailed plan to evacuate our allies,” said Michael Breen of Human Rights First, a U.S. veteran working to evacuated Afghans. “Veterans groups and resettlement agencies stand ready to welcome them. We just need to get them to U.S. soil. Only Joe Biden can decide whether he’s going to make that happen.”