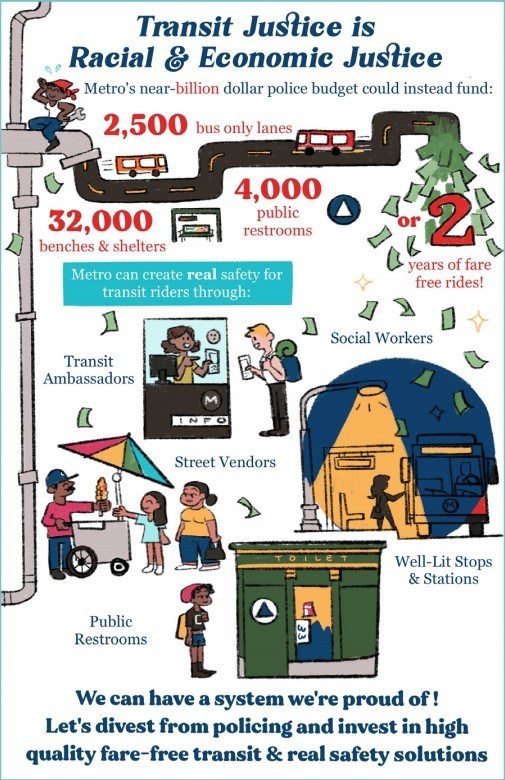 Today, the Alliance for Community Transit (ACT-LA) released a new report, Metro as a Sanctuary: Reimagining Safety on Public Transit. The report reviews past issues with Metro transit policing and offers solutions to inform Metro’s current process to reexamine and reform its security practices. In Metro as a Sanctuary, ACT-LA and its partners truly look to change the way Metro operates and the way the public perceives the Metro system. ACT-LA urges Metro “to push forward an agenda of being the most equitable transit agency in the country.”

…Metro must commit to the long work of looking deeply at internal and external policies and practices and doing things differently. Anti-racism work must last beyond 2020 and continue as something that is fundamental and deeply embedded in all aspects of our organizations’, agencies’, and government operations. The way a transit organization approaches and acts on making their work and services more equitable must include a thorough examination of “safety.” If not clear in the past, 2020 crystallized the reality that “safety” has a different definition for different people. Many of the practices of enforcement and policing that are supposed to make and keep people safe have been used to police the mobility of Black people, Indigenous people, and other people of color (BIPOC) and reinforce inequities through gentrification, displacement and access to housing. Beyond that, policing and enforcement have been used to kill Black people at staggering and alarming rates.

The report outlines the flawed assumptions and practices that have resulted in serious issues with Metro policing today. These include:

The report outlines a broad range of proposed solutions, including:

Solutions are explored in greater detail than what Streetsblog has included above – including many examples of programs operating successfully in other cities.

Learn more about the report at an ACT-LA public webinar next week: Tuesday 3/23 from 10 a.m. to noon. Register via Zoom.