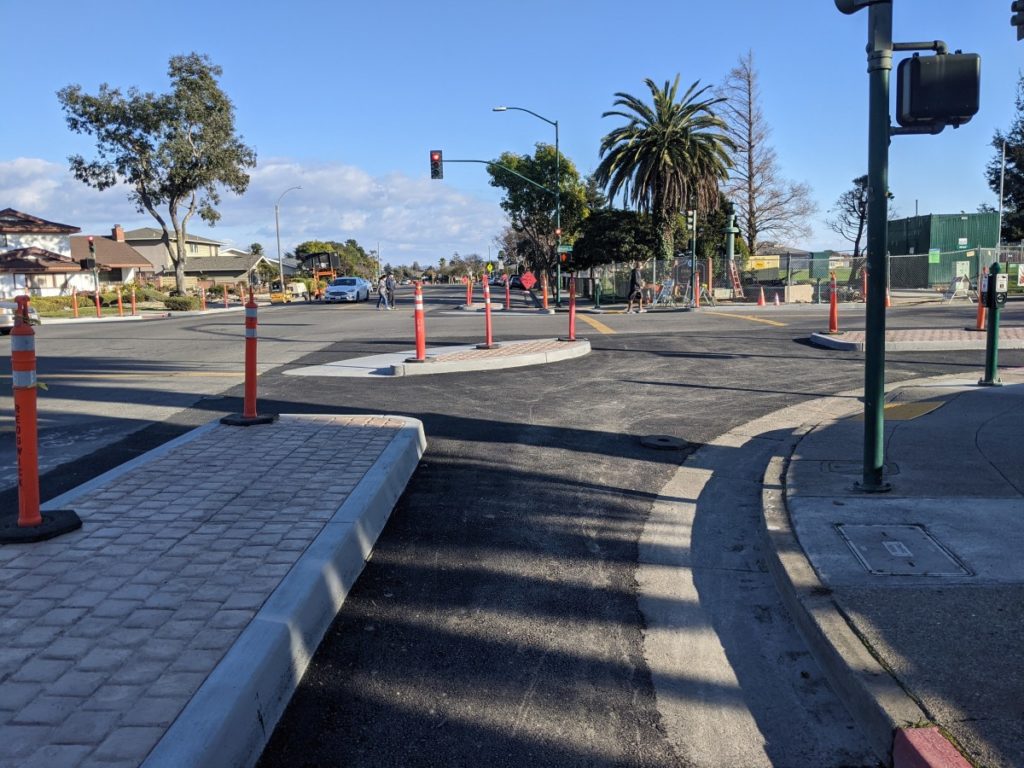 Alameda will soon join the ranks of cities with a fully built out, Dutch-style protected intersection. Construction is well underway at Otis and Grand, a previously notorious junction.

From the City of Alameda:

As seen in the photos and the diagram below, the intersection will have dual-radius turns (the grey arches in the diagram below represent the outer radius) to give motorists a visual and tactile (and hopefully audible) warning that they are taking the turn too tightly. If they don’t correct, their tires will hit the curb height biscuit (the inner radius) with the terra cotta treatment, seen in the diagram and in the photos. And while that might knock off their alignment a tad, it beats a right-hook crash with a cyclist–which is exactly the kind of crash this design makes less likely, by forcing motorists to slow, extending the distance between motorists and cyclists, improving sight lines, and giving all parties more time to react.

Otis Drive is 64 feet wide, curb to curb, and currently operates with two lanes in each direction, on-street parking along both curbs and no bike lanes. Safety concerns include excessive speeds, challenging crossings for pedestrians and a lack of bicycle facilities. The goals of the project include:

Alameda is in the midst of a push to make the entire island city more bike-friendly, converting old rail lines that once crisscrossed the city into off-street bike paths, and adding on-street treatments as well. Some of these new paths, notably the cross-Alameda trail, also have protective concrete treatments at intersections, but the new intersection at Otis and Grand does appear to be Alameda’s first fully built, Dutch-style protected intersection.

The city website says the Otis and Grand intersection will be finished early this year. Traffic going through the intersection already seems significantly calmer and smoother with less potential for conflicts. Streetsblog has reached out to city planners for a more specific completion date and will be revisiting the intersection to see how it progresses.

Alameda now joins Berkeley, San Francisco, Oakland, Fremont and San Jose as a Bay Area city to adopt this Dutch treatment. One hopes this design, plus Dutch-style traffic circles, and of course fully protected bike lanes, will become the standard on busy streets.

It’s worth noting that in these designs there’s one significant difference between the Bay Area intersections and their Dutch counterparts–the Dutch place traffic signals on the near side only. That discourages motorists from creeping into the crosswalks and bike lanes, a common problem in the U.S.

UPDATE 5 p.m.: “…the Cross Alameda Trail crossing of Park Street at Clement Ave will have protected intersection elements similar to what was done on Atlantic and Webster, and Atlantic and Constitution, with any iterative improvements from lessons learned there,” wrote Brian McGuire with the Planning, Building and Transportation Department for the City of Alameda. “Beyond that the Central Ave project is planned for a separated two-way facility from 8th to Pacific/Main and key intersections will have a mix of protected elements as well as roundabouts with bike facilities incorporated. Main Street and Appezzato/W. Atlantic is slated for a protected intersection if and when phase 2 of the Site A development moves forward. We are also considering several more as part of the backbone infrastructure project in the Adaptive Reuse area of Alameda Point.”

More photos of Alameda’s intersection below:

If you’ve never ridden a protected intersection or aren’t familiar with it, here’s how it works: