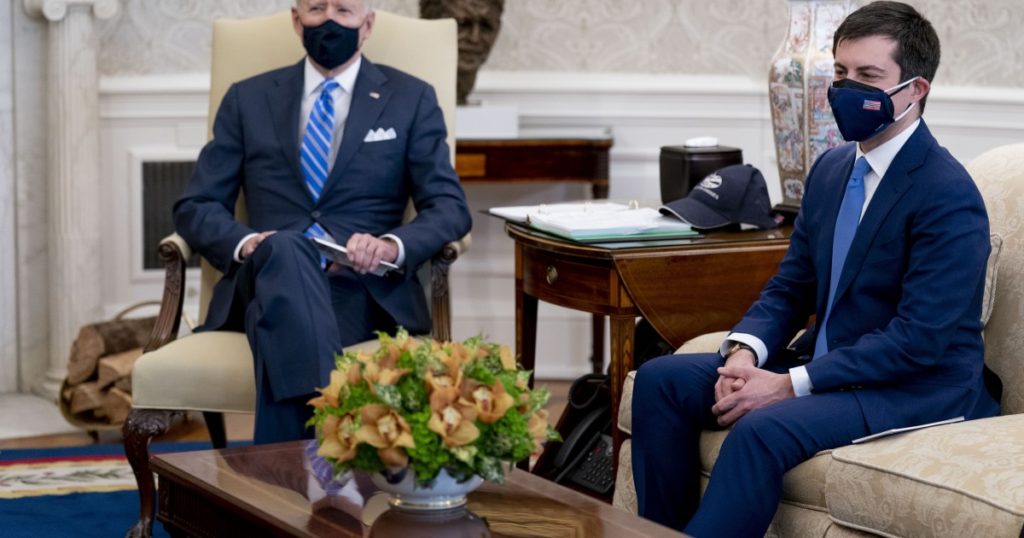 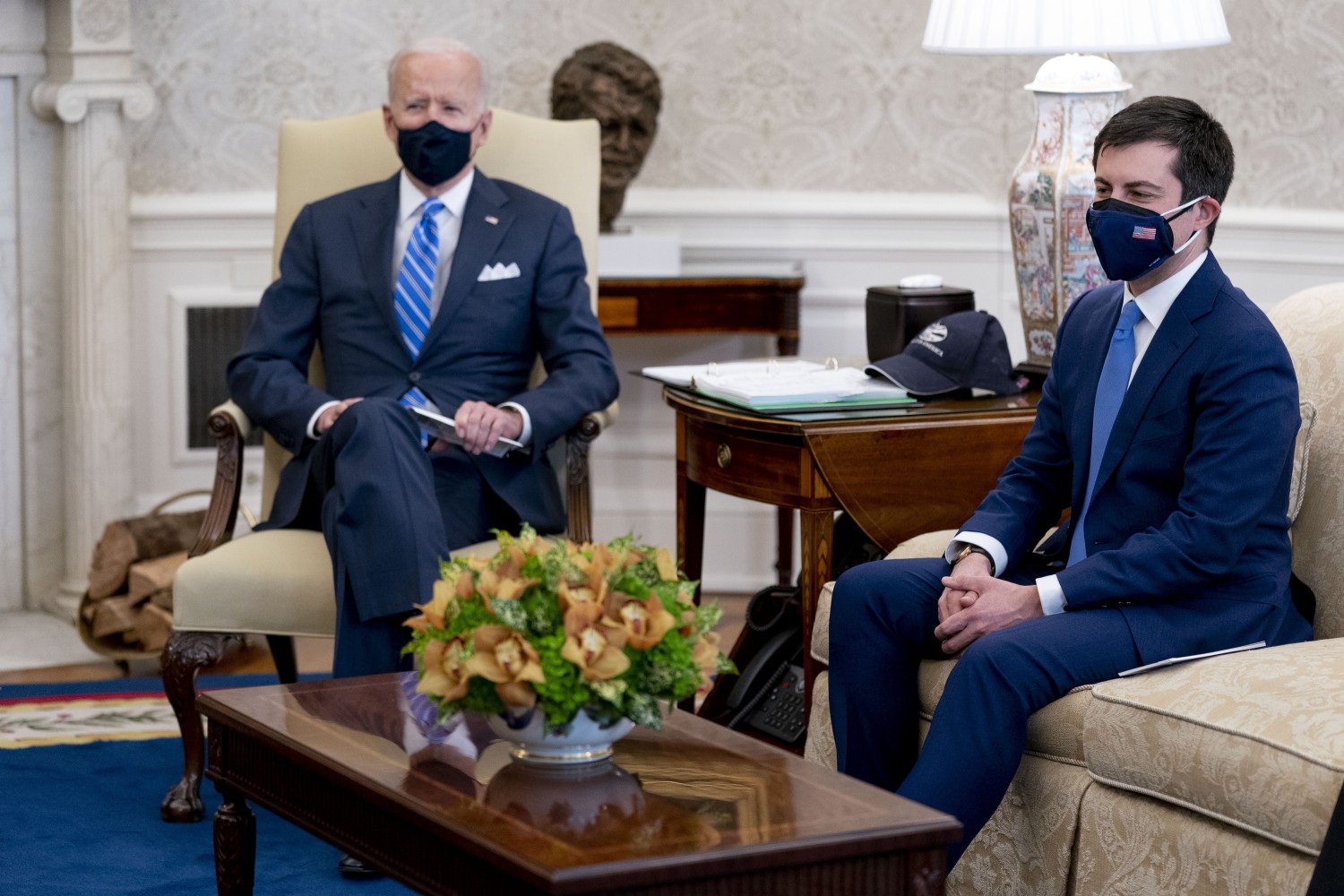 When President Obama outlined plans to overhaul the nation’s infrastructure, Republicans blocked them. President Trump declared it to be “infrastructure week” so often that the phrase became a running joke, yet he failed to follow through with legislation.

Now President Biden, eager to act boldly, believes he can succeed where his predecessors did not.

Holding his second meeting in a month on the subject Thursday, Biden made clear that he intends to focus on another multitrillion-dollar legislative package after Congress sends the $1.9-trillion coronavirus relief plan to his desk this month — the next one a massive infrastructure initiative along the lines of FDR’s federal works projects of the 1930s.

“It not only creates jobs, but it makes us a hell of a lot more competitive around the world if we have the best infrastructure in the world,” Biden said at the outset of the Oval Office meeting with Vice President Kamala Harris, Transportation Secretary Pete Buttigieg and a bipartisan group of lawmakers.

Leaving the White House afterward, the chairman of the House Transportation and Infrastructure Committee, Rep. Peter A. DeFazio (D-Ore.), told reporters that the president “wants to move as quickly as possible.”

“He wants it to be very big, and he feels that this is the key to the recovery package,” DeFazio said.

As with the pandemic relief package, Biden plans to promote an infrastructure plan by emphasizing the urgent need for ambitious actions to help the country recover economically and compete with China.

For years, both major parties have called for modernizing the country’s highways, roads, airports, rail lines, broadband networks and power grids. Last month’s power crisis in Texas, which left millions of people in the cold without running water or electricity, underscored the need for action. And this week, the American Society of Civil Engineers released its analysis of the nation’s infrastructure, giving it a C-minus — an improvement, actually, from last year’s D — and signaling again that a major federal investment is long overdue.

“We’re at a crossroads. Inaction will only worsen the suffering that working people have weathered over the past year,” said Richard Trumka, president of the AFL-CIO. “But if we commit to rebuilding our communities on an unprecedented scale, we can get through this crisis stronger than before.”

The infrastructure push, like the coronavirus relief package, has support not just from labor unions, traditionally a more Democratic constituency, but also the U.S. Chamber of Commerce, which is urging action by July 4 and stands ready to pressure both parties to unite around landmark legislation.

“We’re with organized labor on this. We’re sick and tired of having things start and stop,” said Ed Mortimer, the vice president of transportation and infrastructure at the Chamber of Commerce. “We’re ready to get to the solutions phase.”

In Obama’s time, congressional Republicans repeatedly objected that his proposals were too costly. Trump promised a $1-trillion proposal, but he never pressed the issue and Republicans all but ignored it year after year. Even the president’s “infrastructure weeks” were overshadowed by controversies, including his equivocating response to the white supremacist violence in Charlottesville, Va., in August 2017.

After Trump and congressional Democrats agreed in principle on a $2-trillion infrastructure proposal in early 2019, he torpedoed the talks and refused to work with House Speaker Nancy Pelosi while the House Oversight Committee was investigating him for extorting Ukraine’s president to provide dirt on Biden.

Despite Biden’s bold talk now, there is little evidence that Republicans will support his infrastructure initiative, especially one along the lines he proposed during his campaign, calling for huge investments in green energy projects and tax hikes on high earners and multinational companies to pay for the plans.

Democrats could follow their strategy on coronavirus relief and attempt to pass an infrastructure overhaul in the Senate using the process known as budget reconciliation, which would protect it from a Republican filibuster. But reconciliation bills cannot include policy provisions that aren’t budget-related, so the scope of the package would be somewhat more limited.

“To do the type of transformational infrastructure overhaul the president talks about, it really has to be done through a regular order, and that would require bipartisanship,” Mortimer said. “There’s no reason we shouldn’t be able to come together and have broad support when this kind of package benefits every lawmaker in this country.”

Kevin DeGood, the director of infrastructure policy at the Center for American Progress, a progressive think tank in Washington, is pessimistic that Republicans, after sidelining infrastructure proposals in the Trump years, will work in good faith with Democrats to help Biden secure a policy accomplishment.

“This is going to have to be driven by Democrats,” he said. DeGood suggested the White House should repeat its approach with coronavirus relief — focusing on ensuring the infrastructure proposal is broadly popular, pressuring Republicans to support it and not allowing them to slow things down with dilatory negotiations.

“This White House has been very smart in how it’s approached the COVID bill and gives me a lot of faith that they’re going to be successful,” DeGood said.

In Buttigieg, the former mayor of South Bend, Ind., and a 2020 presidential candidate, the administration will have one of its most skilled and broadly appealing communicators as the public face of the effort.

“Ultimately, passing a multitrillion-dollar economic recovery package is about politics. This is about outlining a vision for what you want these dollars to achieve, and he’s exceptional about that,” DeGood said. Buttigieg could point to his work as mayor: “The guy actually implemented projects and understands how infrastructure fits into economic redevelopment.”

According to a Democrat familiar with the administration’s thinking, the decision to move quickly to infrastructure reflects the hindsight of some Obama veterans, who came to believe that they erred politically early on, in the run-up to the 2010 midterm elections, in giving priority to healthcare legislation over a job-creating package. Democrats lost their House majority in 2010, and they fear losing both chambers in next year’s midterms.

Democrats envision a plan that would not only create jobs but also address climate change through energy-efficient projects and racial equity issues by improving roads and other infrastructure in underserved areas. Pivoting next to an infrastructure bill, which could take months to move through Congress, also might allow Senate Democrats to delay a showdown with the party’s progressive base over its demand that they eliminate the filibuster. In a Senate split 50 to 50 with Harris as the tiebreaker, filibusters — which require 60 votes to overcome — potentially stand in the way of several Democratic priorities.

“It staves off that fight, is a huge accomplishment and is potentially more bipartisan than not. Right now, the entire world is seen through the lens of COVID relief and recovery,” said Scott Mulhauser, a Democratic strategist. Infrastructure, he continued, is “a logical way to keep the focus on that recovery.”