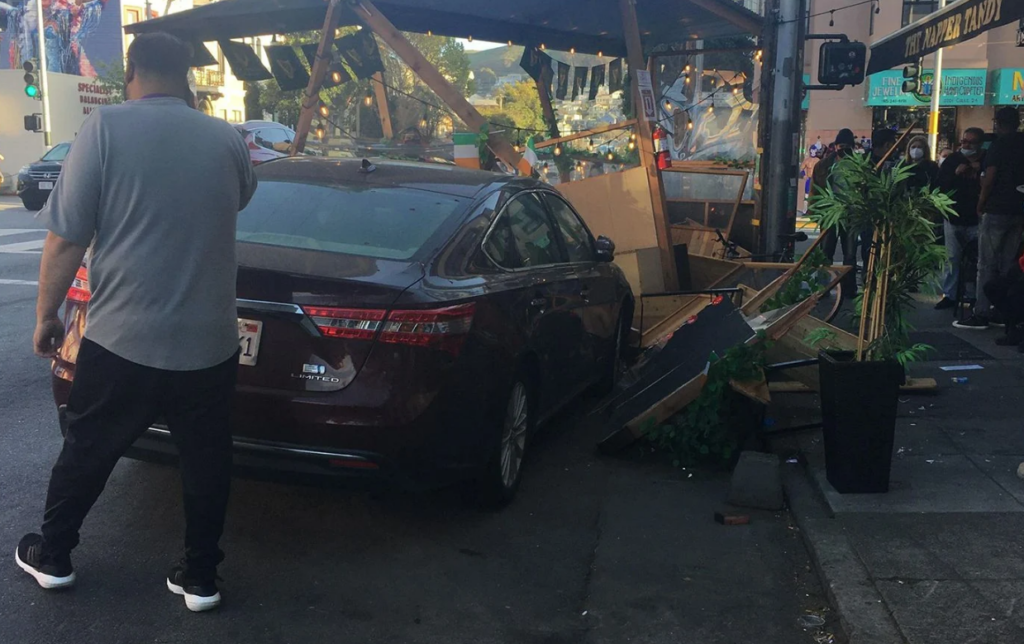 In the competition for San Francisco’s most badly designed, most dangerous street, South Van Ness is definitely a title contender. A reminder of that came late last month when a motorist slammed into the parklet in front of The Napper Tandy pub at the intersection with 24th in the Mission, injuring two people. From Mission Local‘s story:

The driver struck two people, who were hospitalized with non-life-threatening injuries, according to SFPD Public Information Officer Robert Rueca. Responding officers did not detect any impairment from drugs or alcohol in the driver, issued them a traffic citation for not keeping the vehicle in the lane and released the driver at the site.

This got the advocates at Livable City to revive a long-standing push to fix South Van Ness, which Streetsblog wants to amplify. The organization’s Tom Radulovich sent the following letter to SFMTA:

The blossoming of parklets has been one bright spot in the pandemic year we have all endured. They have helped save our small businesses and sustain and improve our City’s frayed public life. Sadly this is not the first parklet that a driver has crashed into. The problem on South Van Ness and elsewhere isn’t with parklets; it’s with the City’s negligence in perpetuating unacceptably dangerous street designs.

South Van Ness is a dangerous street with an inherently unsafe design – four wide traffic lanes, with narrow sidewalks and no provision for safe cycling. Its deadly design has made it a High Injury Corridor, one of the 13% of City streets where 75% of deaths and serious injuries occur. Less than two years ago 69-year-old woman was killed crossing South Van Ness at 19th Street. This dangerous, high-speed highway-style arterial runs through a dense residential neighborhood identified as a ‘community of concern’ – home to’ disadvantaged and vulnerable populations and communities’.

The City has known for a very long time that South Van Ness needs fixing. Over a quarter-century ago the City’s General Plan called for redesigning South Van Ness to make it “more compatible with residential uses.”

But for decades the City has done nothing to fix South Van Ness.

There’s a simple, inexpensive, well-documented, and easily-implemented improvement that’s likely to make South Van Ness safer – a 4-to-3 lane road diet. 4-to-3 lane road diets replace two lanes in each direction with a single lane in each direction, with a center left-turn lane and bike lanes on either side. 4-to-3 road diets require nothing more than paint, and are a well-established and widely-used safety improvement in San Francisco and around the world. 4-to-3 road diets can even move comparable amounts of auto traffic to a four-lane road, but they do so more safely. Folsom, Street, one block to the east and with the same dimensions as South Van Ness, was given a 4-to-3 road diet several years ago, and has since become much safer and more comfortable to walk and bike on.

San Franciscans deserve safe streets. South Van Ness is an unacceptably dangerous street, and we’re calling on SFMTA to fix it immediately. South Van Ness can be quickly and cheaply made much safer, using a proven design solution. Fixing South Van Ness will immediately improve safety, livability, and mobility for the neighborhood’s residents and visitors, and help move the City towards our Vision Zero goal of eliminating traffic deaths and injuries.

Note/Update, May 5: SFMTA has a project page describing planned safety upgrades for S. Van Ness, which should have been noted in the body of this piece… Streetsblog apologies for that oversight. The project’s current status, however, is unclear. Streetsblog is requesting more information and will update.