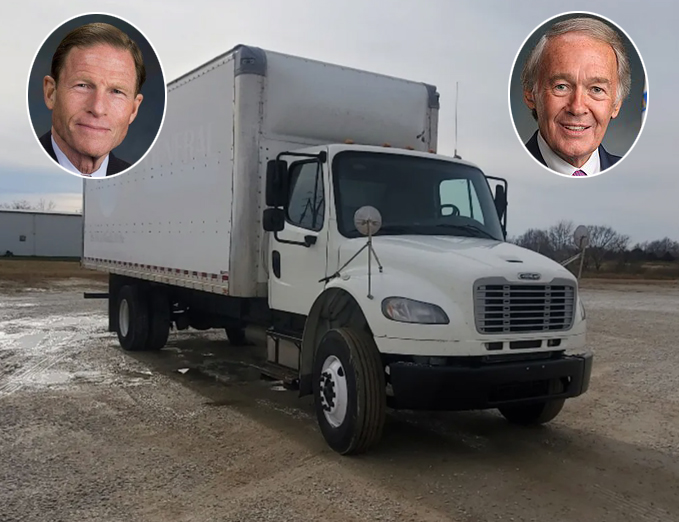 The next baseline infrastructure bill can no longer ignore the need for common-sense vehicle safety improvements that save vulnerable road users’ lives, a coalition of advocates and lawmakers said on Tuesday.

In an emotional press conference, Sens. Richard Blumenthal (D-Conn.) and Edward Markey (D-Mass.) joined with activists and the families of victims of automobile violence from across the country to demand that the Senate’s recently introduced road user safety bill be amended to include a raft of overdue vehicle safety requirements that are proven to save lives.

As part of their effort to pass a new baseline infrastructure bill before the FAST Act expires in September, the Senate Committee on Commerce, Science, and Transportation advanced the bipartisan Surface Transportation Investment Act on June 10, a foundational road safety funding bill which will be puzzle-pieced together with other legislation to collectively reauthorize the country’s transportation programs and federal laws. The Investment Act was met with tepid reactions from sustainable transportation advocates for failing to enact critical reforms to vehicle safety and road design standards, while only moderately increasing funding for the National Highway Traffic Safety Administration; it will go through a committee markup on Wednesday.

And the omissions to the bill are, indeed, glaring, particularly for how they underscore how low the bar has been set for U.S. vehicle safety overall.

Among the most outrageous oversights is the committee’s failure to require automatic emergency braking technology on all new vehicles, much less set federal standards for the efficacy of that technology that many advocates say are long overdue. The Surface Transportation Investment Act would, for the first time, require the technology on large trucks, but would not require it on the light trucks and cars that most Americans drive, or even on smaller trucks such as the delivery vehicles that are ubiquitous in U.S. neighborhoods.

“Special trucking interests don’t want to spend the money to put [automatic emergency braking] on all trucks, even though the cost of this technology has been estimated at a non-retail cost of less than $300 [per vehicle],” said Jena Frost, who lost her 5-year-old son, Wyatt, to a fatal crash with a box truck driver in 2016. “This callous piece of legislation is an insult on top of deep grief.”

Other parents spoke tearfully of losing children whose deaths could have been easily prevented by improved seatback safety standards, which were proposed more than 50 years ago and that would add only $5 to the production costs of new vehicles; still others spoke of the need for simple alert systems which could save the lives of some of the most vulnerable road users of all: babies accidentally left in their car seats on hot days.

Other advocates were insulted by the Senate’s failure to require an update to the New Car Assessment Program, a critical consumer education program which has long failed to evaluate U.S. vehicles for how likely they are to kill pedestrians, cyclists, and other people outside vehicles, despite the establishment of international standards for pedestrian crash mitigation tests in 2008. The coalition is pushing to right that wrong, in addition to setting timelines to implement vehicle safety requirements aimed squarely at protecting non-drivers, like crumpling hoods and bumpers.

“NCAP was intended to push the auto companies to make their cars better than the minimum safety standards,” said former NHTSA Administrator Joan Claybrook, who created the program. “But America has fallen short, because we’ve never given the agency the money it needs to adequately update the program as technology evolves. It’s just really sad.”

Getting road safety laws out of the past

Many of the advocates’ sought-after amendments would simply bring the U.S. to the standards of the rest of the world, but some items on their wish list are more forward-looking. The group wants NHTSA to set a timeline for requiring distracted-driver monitoring systems that could bring a car to a safe stop if motorists ignore alerts to pay better attention, which could be critical for preventing both drunk driving deaths and “automation complacency” as advanced driver assistance technology like the kind found on semi-autonomous cars becomes more ubiquitous.

And some of the changes would prevent the Senate from regressive rollbacks on hard-fought safety wins. Blumenthal took particular offense to a section of the bill that would allow trucking companies to hire interstate drivers as young as 18, despite evidence that drivers between 18 and 20 are four to six times more likely to be involved in a fatal crash than older truckers.

“We are seeing a full-frontal assault on [traffic] safety by special interests who are using the economic downturn as a front to … erode progress that’s already been made,” said Blumenthal. “Putting 18-year-olds behind the wheel of a multi-ton rig is a recipe for disaster.” (Eighteen-year-olds are currently allowed to operate routes within some states.)

Of course, that assault is just one battle front in the relentless war to assert car dominance in American communities, and improving vehicle safety design alone won’t end our traffic violence crisis. But advocates and legislators agree that until we can more comprehensively retrofit our roadways and policies to put safety first, the Senate should at least pluck the lowest-hanging fruit: making cars and trucks safer.

“We cannot accept these tragedies as inevitable,” said Markey. “Instead, we must immediately implement proven strategies and technologies that can save countless lives moving forward.”