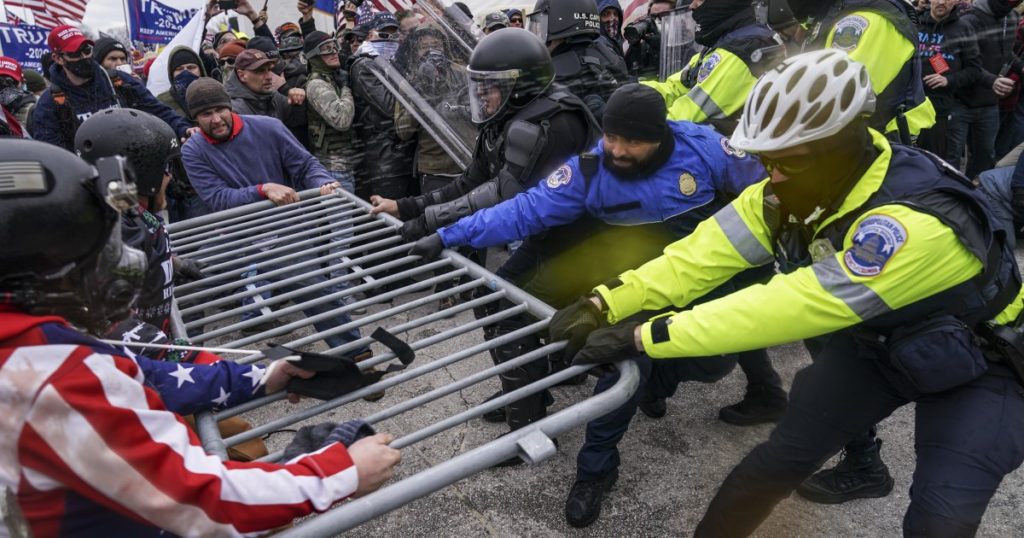 Fox News declined to broadcast an ad Sunday about the violence that law-enforcement members faced as they tried to stop the Jan. 6 insurrection at the U.S. Capitol, according to the creators of the political commercial.

“We couldn’t have fathomed in our wildest imaginations that even a Fox News would reject an ad that simply condemns the insurrection, and condemns people who support the insurrection,” said Ben Meiselas, one of the co-founders of MeidasTouch, the liberal Political Action Committee that created the 60-second ad. “What Fox has really become is a fascist echo chamber gatekeeper for their base.”

Broadcast and cable networks have discretion in refusing to air ads by political campaigns and advocacy groups. A Fox News spokeswoman did not respond to a request for comment on Saturday.

Meiselas and his two brothers, Brett and Jordan, said they placed the ad buy as they have in the past, but were informed over the phone on Friday that the cable network would not air the ad and were not given a reason. Fox News has never before refused to air one of their ads, they said.

The commercial features law-enforcement officers testifying in Congress and speaking to the media about their experiences during the insurrection, including getting sprayed with bear mace, engaging in hand-to-hand combat and being called “traitors.”

The ad ends with block letters that say” “The GOP Betrayed America. We Will Never Forget.”

The ad has gone viral on social media, racking up more than 1 million views on Twitter.

Fox News is the target of multibillion-dollar defamation lawsuits by voting system and software makers over its coverage of the integrity of the 2020 presidential election. Dominion Voting Systems and Smartmatic accused Fox News of irresponsibly broadcasting falsehoods that their technology and equipment were used to rig the election. The fraud claims are among the factors that led to the insurrection as lawmakers were voting to certify the election results.

Fanone, who suffered a heart attack after rioters beat him with a flagpole and repeatedly stunned with him with his Taser gun on Jan. 6, is among the law-enforcement members who have been vocal critics of Republican lawmakers who blocked the creation of a commission to study what happened that day.

The House of Representatives approved a plan to create a bipartisan commission to investigate the insurrection on a 252-175 vote; but in the Senate, it received 54 votes in late May, six shy of the number required to bring the proposal up for debate.

A spokeswoman for President Biden on Thursday ruled out creating a presidential commission to study the matter, aligning the White House with House Speaker Nancy Pelosi in the belief that such an inquiry needed to be instigated by Congress.

MeidasTouch booked nearly $185,000 of air time to play the ad on Fox News between June 6 and 15, starting with Chris Wallace’s Sunday show and continuing for seven days on “Fox and Friends” as well as two spots on daytime programs and one more on Wallace’s show next weekend.

Brett Meiselas noted that many shows on the network routinely talk about “cancel culture.”

“The fact they want to cancel and censor the voices of law enforcement who bravely guarded the Capitol. It’s the height of hypocrisy, and it’s un-American,” he said.

MeidasTouch is a liberal political action committee formed in 2020 by the three brothers, who have notable ties to Hollywood. Their father is a prominent attorney who represents musicians including Lady Gaga.

Ben Meiselas is a lawyer whose clients include former NFL quarterback Colin Kaepernick. Brett Meiselas was an editor on Ellen DeGeneres’ talk show. Jordan Meiselas, a former marketer, is now working full time on the PAC.

The PAC made anti-Trump videos during the 2020 presidential race and supported Democrats during the special Georgia Senate races earlier this year. The PAC did not receive as much attention as anti-Trump groups such as the Lincoln Project; it spent about $4.2 million last year.