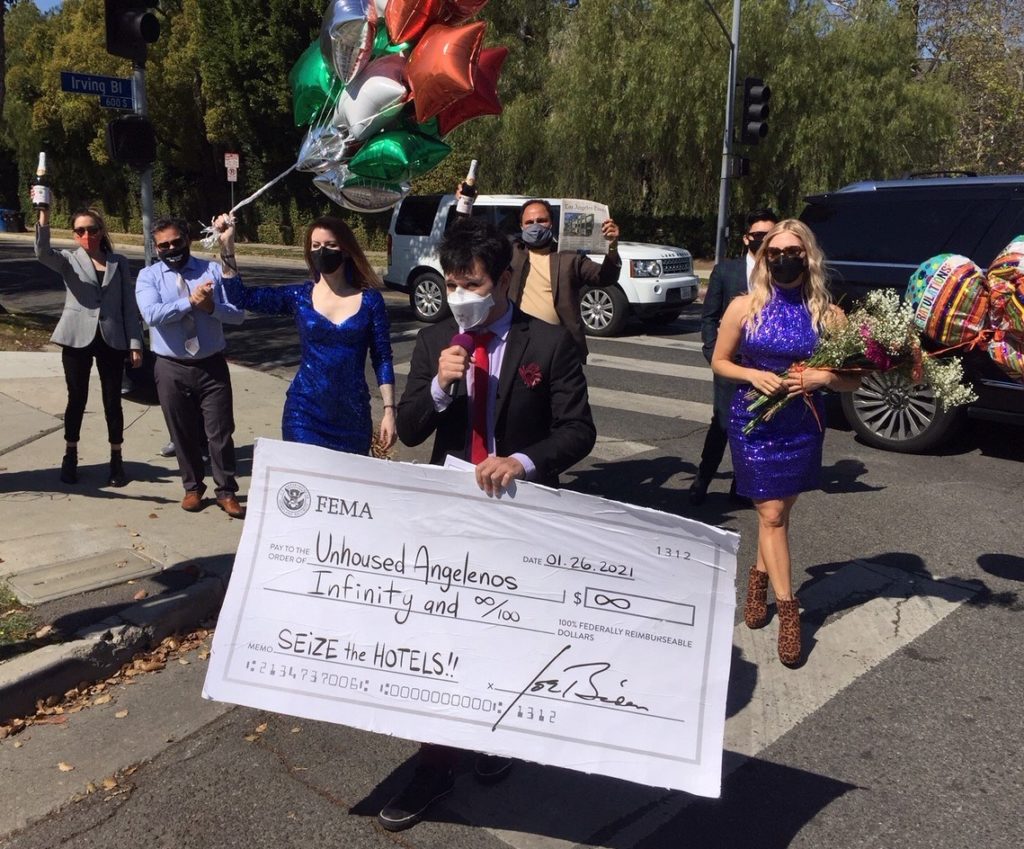 Outside the L.A. mayor’s Hancock Park home this afternoon, a Ktown for All emcee listed off the names of Los Angeles hotels. A crowd of two dozen replied with shouts of “Let us in!” and “Seize the hotels!” The emcee held up an oversized check good for “unlimited federal funds here for the taking” from FEMA to reimburse expenses for the city’s Project Roomkey, a program that utilizes hotel rooms to temporarily house unhoused Angelenos.

The mayor was nowhere in sight.

On Monday, the FEMA Clearing House Sweepstakes team paid a visit to Council President @CD6Nury to hand-deliver her every politician’s dream — FREE MONEY!! But things didn’t go according to plan. #SeizeTheHotels pic.twitter.com/iJ4DBxlHkS

Ktown for All had staged similar political theater outside the home of City Council President Nury Martínez last week; they were quickly met by an LAPD escort.

Despite huge needs locally and an offer of unlimited reimbursement, the city of Los Angeles has only been able to very modestly expand Roomkey, temporarily housing hundreds. A state initiative carried out by local jurisdictions, Project Roomkey was announced last April. At the time, L.A. County leaders were targeting 15,000 rooms. The program has made a positive difference in the lives of thousands of formerly unhoused Angelenos, but did not come near meeting that target. Last summer, the program peaked at just under 4,000 rooms.

In L.A., the Roomkey program stalled out in September 2020, mainly due to a lack of funding as the pandemic shrunk the city budget. At that time, under the last administration, local jurisdictions could only receive 75 percent reimbursement for Roomkey expenses.

In February, Mayor Eric Garcetti announced his initiative to have the city front $75 million to continue Roomkey at 1,200 rooms at three city hotels through September. But going beyond this has been difficult. The city budget remains very tight, so the council and mayor are reluctant to advance a lot of money that the feds would reimburse slowly.

There is quite a bit of City Council support for expanding Project Roomkey, but that support is outweighed, so far, by an inability to commit upfront funding to pay for the program.

City Councilmembers Mike Bonin and Nithya Raman authored a motion (council file 21-0113) to get the city to figure out how to expand Project Roomkey “with a goal of providing interim non-congregate shelter for tens of thousands of people.” That motion was approved by the full council yesterday, as well as another motion (council file 21-0235) by Martínez and Paul Krekorian calling for $150 million in emergency state funding for Roomkey.

The bad Roomkey news that came out yesterday, reported by the L.A. Times, is that, a year into the pandemic, the city has yet to even ask the federal government for an estimated $59 million reimbursement for past Roomkey expenses. At a time when Angelenos are dying on the streets, the city is pleading austerity, and federal money is available, but not being taken advantage of due to a scarcity of up-front funding, that $59 million could have gone a long way.

Compare those budget numbers with last week‘s decision at Metro – supported by Garcetti, Krekorian, and Bonin – to advance $72 million worth of future highway loans to Caltrans to cover cost overruns on a 5 Freeway widening project that destroyed homes. These are all different budgets (city, Metro [county], and Caltrans [state]), but the preference for moving some of the most vulnerable Angelenos out of the way rather than the more difficult work of moving them into stable homes seems pretty clear.