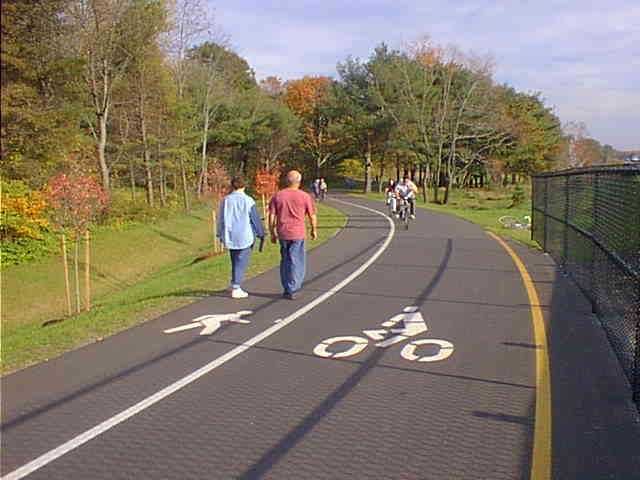 A whopping 20 percent, or $1 billion, of all member-designated projects in the INVEST for America Act included elements specifically for people who walk and roll, which the Rails-to-Trails Conservancy called a clear signal “that demand for significant investments in active transportation far exceeds what is provided by existing federal programs.” Although “earmarks” have long been controversial in the transportation world, not least because the funds sometimes sit unclaimed for years, advocates say the proliferation of such projects indicates latent demand for safe, people-powered transportation infrastructure in communities across America.

“You can’t achieve the country’s ambitious and critical goals around climate, equity, access and safety without active transportation,” said Kevin Mills, RTC’s vice president of policy. “This bill recognizes that and prioritizes policies that make walking and biking safe, accessible and equitable.”

Of course, highway expansions and bridge replacements were by far the largest of the the more than 1,400 local projects on the final list. Even so, projects devoted to bringing sidewalks, bike lanes, and traffic-calming features to U.S. roads also gained an encouraging amount of funding.

In Massachusetts, a $14.7 million infusion would help bridge a critical gap in Cape Cod’s rail trail system, while the Baltimore Greenway Trails Network in Maryland would score an almost-as-large $13.2 million. Booming Austin, Tex., meanwhile, would receive $10 million to build the six-mile Bergstrom Spur rail-trail. Another $10 million would pay for a road diet and a slew of transit and road-user safety improvements on West Florissant Avenue in the greater St. Louis, Mo., area, which became famous nationally as the site of major protests in the wake of the murder of Michael Brown Jr.

But the beautiful thing about active transportation is you don’t always need a megaproject to save and improve lives — and many worthwhile smaller-ticket items also appear on the earmarks list, too.

Advocates can find out more about which active transportation mini- and mega-projects in their areas made the House Transportation and Infrastructure Committee’s list here — it’s 1,383 pages, so we recommend the control-F function — and Streetsblog Mass readers can learn more about all the transportation earmarks that might be coming to the Bay State here.

For advocates who are worried that their favored infrastructure project was left off the list, don’t forget: the same bill includes a 75 percent funding increase for the two dedicated pots of federal money that walking and rolling already receive, a new grant program that will give those modes another $250 million a year, and reforms that will discourage states from just stealing that money and giving it to drivers.