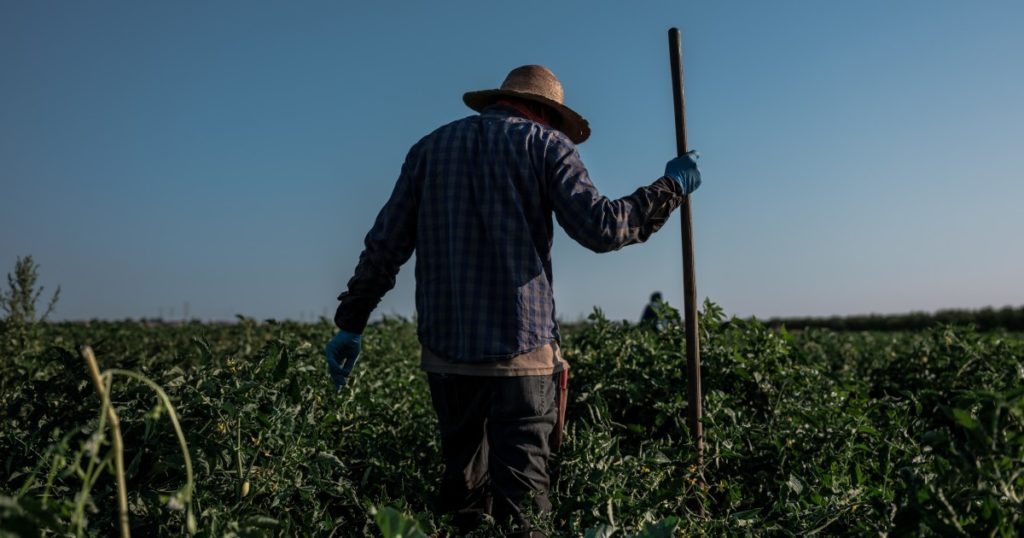 Dominic Bruno is not closely tracking the greenhouse gas soaking into the dirt beneath the walnut trees, sunflowers and melon vines at River Garden Farms in Yolo County, where the state of California spent $97,000 this year to create a 15,000-acre emissions sponge.

Bruno is focused on how the state’s promotion of “regenerative” soils on his and 333 other farms has made the land healthier and more productive.

“It is awesome that it is incentivizing people to venture out and try these different approaches,” said Bruno, assistant general manager at River Garden. “As far as the carbon things go? I don’t know.”

The state offers its own surprisingly precise accounting: It credits River Garden with keeping 458 metric tons of harmful carbon dioxide out of the atmosphere per year. It is an impressive number, but one that could be wildly inflated. Scientists caution that calculations of emissions consumed by soil are often wrong.

Yet the Biden administration is so impressed by the kinds of numbers posted by pilot projects such as California’s $21.8-million Healthy Soils Program that it is angling to replicate them on a much grander scale, creating a potentially billion-dollar “carbon bank” that would make payments available not just to modest companies like River Garden, but also to the nation’s industrial farming giants.

The uneven evidence supporting the climate promises of carbon bank proponents, who include Agriculture Secretary Tom Vilsack and top environmental advisors in the Biden administration, is raising red flags among some climate economists and other sustainability experts. They worry that what the administration is pitching as a bold step to confront warming could turn into a giveaway to Big Ag.

“The science just isn’t there yet to show these agricultural practices can sequester large amounts of carbon in the soil,” said Anne Schechinger, senior economic analyst at the Environmental Working Group. “It seems another way to line farmers’ pockets with taxpayer dollars, while masquerading as a climate change solution.”

There is broad agreement that better soil management has environmental benefits: reducing soil erosion, improving water quality and making for more sustainable agriculture. But there is concern that its effectiveness at combating climate change has been overblown.

Some scientific studies found that, over the long term, the trapped greenhouse gases ultimately made their way back into the atmosphere. The World Resources Institute took a deep dive into the science behind soil sequestration last year and found it is “unlikely to achieve large-scale emissions reductions.”

The idea is to cut back on the release of greenhouse gases from the ground that happens when farm soil is disturbed, whether it be through bulldozing or erosion.

This often involves no-till farming, drilling seeds into the soil to avoid the plowing that releases greenhouse gases into the atmosphere as earth is broken. Another strategy is planting cover crops after harvests, ostensibly trapping carbon in the ground.

The plan for the Department of Agriculture to pay farms for shifting to such methods is mapped out in a memo co-authored by Robert Bonnie, who led the department’s transition team and is now its senior climate advisor. The memo says that within the first 100 days of the Biden administration, the USDA could unveil a system “to buy tons of carbon and [greenhouse gas] reductions from producers and forest landowners generated through improved land management practices.”

The USDA declined to make any officials available to be interviewed, referring instead to public comments made by Vilsack. He vowed at his confirmation hearing last month and in a recent exchange with reporters that any subsidies would start as a pilot program, and would have to be supported by science verifying the payments would, indeed, result in verifiable climate action.

During a virtual seminar hosted by AGree, a group that promotes sustainable farming, Bonnie acknowledged the difficulty of verifying that any farming practice changes are actually resulting in emissions reductions.

“The question is can we make investments to reduce that uncertainty so that we can actually prove [climate benefits of] these actions producers take?” Bonnie said.

The carbon bank plan, which is championed by a coalition of large agriculture interests, environmental organizations and Biden administration insiders, is positioned to become an early climate initiative of the administration.

It is among a handful of climate action subsidies that the new administration can dole out without a vote of Congress, by tapping the same $30-billion agriculture fund that the Trump administration used to subsidize growers who sustained losses amid the trade war with China.

As the Biden administration reviews every sector of the economy for its impact on climate, agriculture is a rich target. It is one of the nation’s largest drivers of global warming, accounting for 10% of greenhouse gas emissions. Yet regulatory, financial and political hurdles have made farms slower to embrace climate-friendly polices than some other industries.

The move to make the payments into a “carbon bank” underscores the limited toolkit the Biden administration has to pursue climate action as Congress balks amid opposition from lawmakers skeptical of climate science, fossil fuel company resistance, and disagreement over the best approach for regulating greenhouse gases. Absent national caps on carbon that would force industries to take bolder steps to reduce their emissions, the fallback is a patchwork of imperfect credits and other incentives that can be vulnerable to manipulation.

One specific point of concern for skeptics of government payments to farms is the private “carbon credit” brokers the USDA is considering involving.

When a farm enrolls in the USDA program, the government could sell such brokers credits for the greenhouse gas reductions at that farm. The brokers would then sell the credits to corporations outside the farming sector, such as oil companies or large manufacturers. The corporate buyer of the credits from the farm can then use them to claim they have reduced their own net emissions — or even gone carbon neutral — while they continue to pollute.

The fledgling credit brokerage industry is largely unregulated, and some watchdogs are alarmed by the prospect that it would be entrusted to determine when farms have actually reduced emissions.

“It is really difficult to verify any type of payment to a farmer results in long-term net greenhouse gas reductions,” said Dan Blaustein-Rejto, director of food and agriculture at the Breakthrough Institute, an Oakland think tank focused on environmental innovation. He said if brokers start selling emissions credits based on activity by a USDA carbon bank, “then I think we are going in the wrong direction.”

It all makes for a vexing challenge for climate advocates who are anxious for action after all the backsliding of the Trump era. The Environmental Defense Fund, for example, has joined with the farm lobby in advocating the carbon bank, even as it acknowledges the uncertain science around using soil to absorb greenhouse gases.

“The Environmental Defense Fund is still in early days of trying to figure out how to structure a carbon bank,” said Callie Eideberg, the group’s director of agricultural policy. “But we generally want to go down this path.”

She said the organization will be pushing the bank to initially focus on agricultural practices already proven to reduce emissions, such as use of climate-friendly fertilizers that reduce the amount of potent nitrous oxide released into the atmosphere, while the USDA further explores whether methods such as no-till farming and cover cropping are viable options for curbing climate change.

But others are already forging ahead, lobbying the USDA to start paying farmers who transition to tending their soil with methods purported to slow warming. This includes prominent senators across party lines who are championing legislation to authorize the payments. The idea is gaining traction because it is one of the simplest transitions farmers can make and it could be scaled up quickly.

The uncertainty around it all has moved agriculture firms to push the administration to enlist more bipartisan backing before launching any program.

“The worst-case scenario is you get farmers interested and bought into the concept without it having some type of bipartisan signoff,” said Andrew Walmsley, director of congressional relations at the American Farm Bureau Federation. Then, he said, a new administration could come along and cancel the program in a few years, leaving farmers who have made long-term investment in it “left holding the bag.”

That’s not the worry of Robert Paarlberg, an associate in the sustainability science program at the Harvard Kennedy School of Government. His concern is that the program as envisioned by Bonnie and other promoters will prove durable, and become a racket through which farms are given big payments for activities that aren’t helping the climate.

“There is a history with these types of programs that makes me nervous,” said Paarlberg, author of “Resetting the Table: Straight Talk About the Food We Grow and Eat.” He pointed to ethanol subsidies to farms, which environmental groups have come to regret supporting amid evidence the environmental benefits of the fuel are erased by all the energy that goes into producing it.

“Lots of environmentalists got on board believing it has got to be better for the environment than fossil fuels,” he said. “But the science in the end just did not bear that out. And now we have a law that mandates we continue its use as a fuel.”